This report was written by Director of Survey Research Jill Mizell and Senior Manager of Programs & Engagement Kelley-Frances Fenelon.

After a year of record profits, companies are facing new economic headwinds as we approach Labor Day 2022, making human capital investments more important than ever. In the midst of record inflation, prospects of a looming recession, and a tight labor market, JUST Capital turned to the public in a new survey – asking what they think corporate leaders should prioritize when it comes to their workers – to help corporate leaders focus on what matters most and stay competitive in the months ahead.

Despite rhetoric on the national political stage and in the media that the country is extremely polarized on critical issues, when we surveyed the American public, we found not division but alignment. In response to questions on how companies should invest in their workers, majorities of Americans – across party lines – want to see companies pay their frontline workers enough to make ends meet and avoid having to rely on public assistance. Republicans, Independents, and Democrats alike agree that it’s a company’s responsibility to raise wages in line with cost of living increases, provide affordable health insurance, provide opportunities for advancement, and more.

Below, we explore the public’s views on corporate responsibility around wages, benefits, transparency, and more – highlighting responses by political party for a deeper understanding of what Americans collectively believe companies should prioritize for their workers.

Companies have a responsibility to ensure the economic stability of their workers.

In our annual survey research – polling the American public to determine The People’s Priorities for corporate America – paying a fair, living wage has been the top priority for the last several years. And as we’ll reveal in the coming weeks, this year’s update to our survey confirms that the American people continue to agree.

This focused survey reinforces and adds specificity to these findings, with majorities of Americans agreeing that companies should pay frontline workers a living wage. By definition, a living wage should cover the local cost of basic needs – including food, housing, transportation, healthcare, childcare, and more. 84% of respondents agreed that large companies should pay enough so their frontline workers can make ends meet, and 87% agreed these workers should earn enough so they don’t have to rely on public assistance.

With rising costs due to inflation, it’s increasingly difficult for low-income workers to cover the costs of their basic needs – in a July Census Bureau survey, two in five Americans said they had difficulty paying for typical household expenses the previous week. While issues of public assistance and minimum wage are heavily polarized in the political arena, majorities of Americans remain largely aligned across political parties when it comes to paying a living wage: 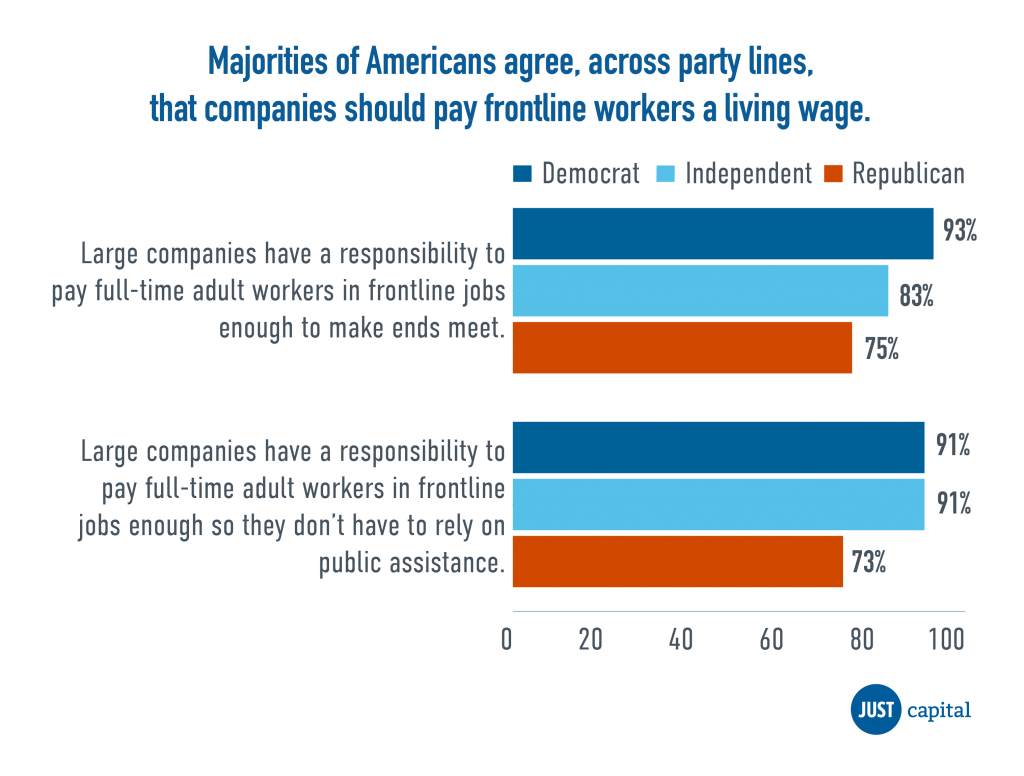 Interestingly, it seems that that Independents are especially in favor of paying workers enough so they don’t need to rely on public assistance – matching Democrats’ 91% agreement. On the other side of the aisle, we see that three in four Republicans agree with their Democrat and Independent peers, indicating that Americans are largely aligned on these issues, regardless of political ideology.

Exploring other worker and job quality issues – including wage increases, health insurance, and career advancement – we see similar findings, with majorities of Americans across political divides agreeing that companies are responsible for the following. 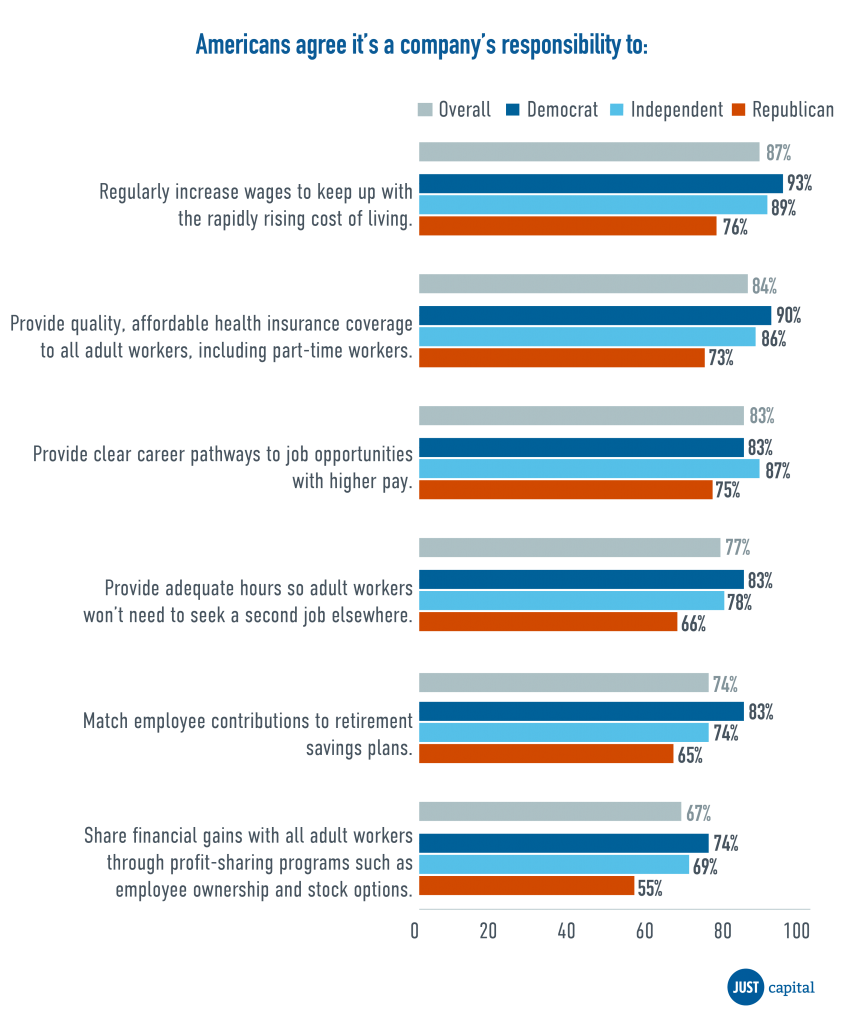 As Americans face rising costs of living, Americans overwhelmingly agree that companies should increase wages to keep up – including 93% of Democrats, 89% of Independents, and 76% of Republicans. Similarly, at least three in four Americans, regardless of party affiliation, agree that companies should provide quality, affordable health insurance and clear pathways to job opportunities with higher pay – not as “nice-to-haves,” but as basic responsibilities employers have to their workforces. Some issues, including retirement matching and profit-sharing, receive less support from Republicans, but we still see majorities of respondents across the board agreeing that these are all responsibilities for corporate America.

Through our ongoing survey work, we see that accountability and follow through are critical to building trust. With the SEC signaling this year that certain human capital disclosures are likely to become mandatory for large companies – and disclosure currently low among the companies we rank – corporate America likely to face increasing demand for transparency on worker issues in the coming months and years. And as American workers increasingly reject the status quo and seek job opportunities that compensate them fairly, pay disclosures provide crucial information to employees and provide a lever for companies to attract top talent. 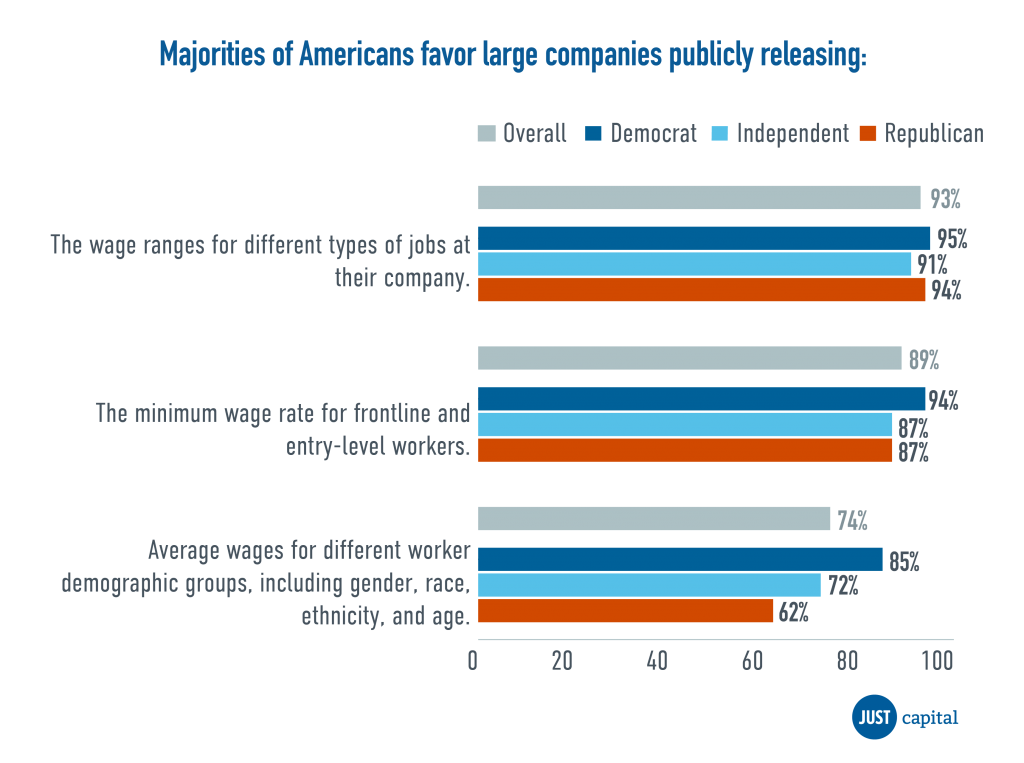 Nearly equal percentages of Democrats, Independents, and Republicans (more than four in five respondents) want to see companies release wage ranges for different types of jobs – suggesting that there is firm agreement among Americans that greater disclosure is needed.

Americans believe that companies that pay a living wage deliver greater value to all their stakeholders.

As part of this survey, we asked respondents to consider two hypothetical companies – one that pays workers a living wage (Company A) and one that cuts costs through lower wages (Company B) – and compare them across different potential outcomes.

What we found is that Americans firmly agree that the company that pays a living wage is better for its workers, provides better customer service, and is more ethical overall. By delivering value for its employees – and, in turn, its customers – companies can live up to their stated values and embody just business practice. 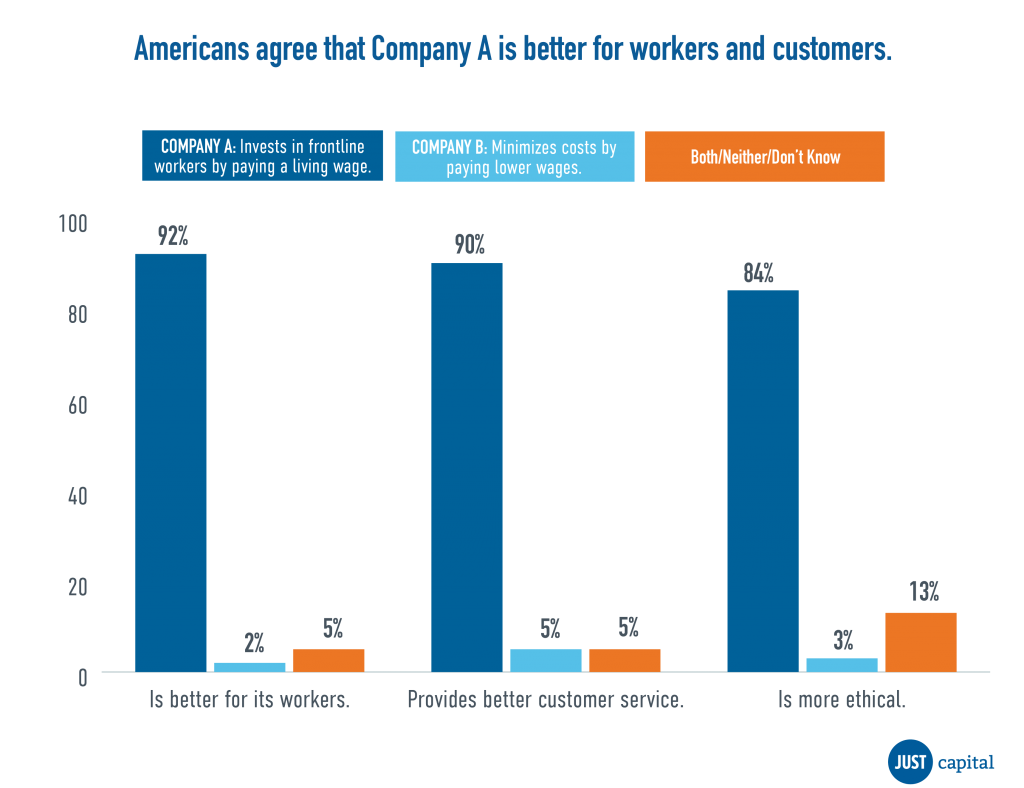 In addition to agreeing that the company that pays a living wage (Company A) is better for workers and customers, Americans believe that it is better for the economy overall and more competitive in its industry. With investments in workers comes a more engaged workforce, yielding better service for customers and ultimately, a competitive advantage. These findings indicate that Americans see the value of just business and an alignment between the ethical and business cases for worker investment. 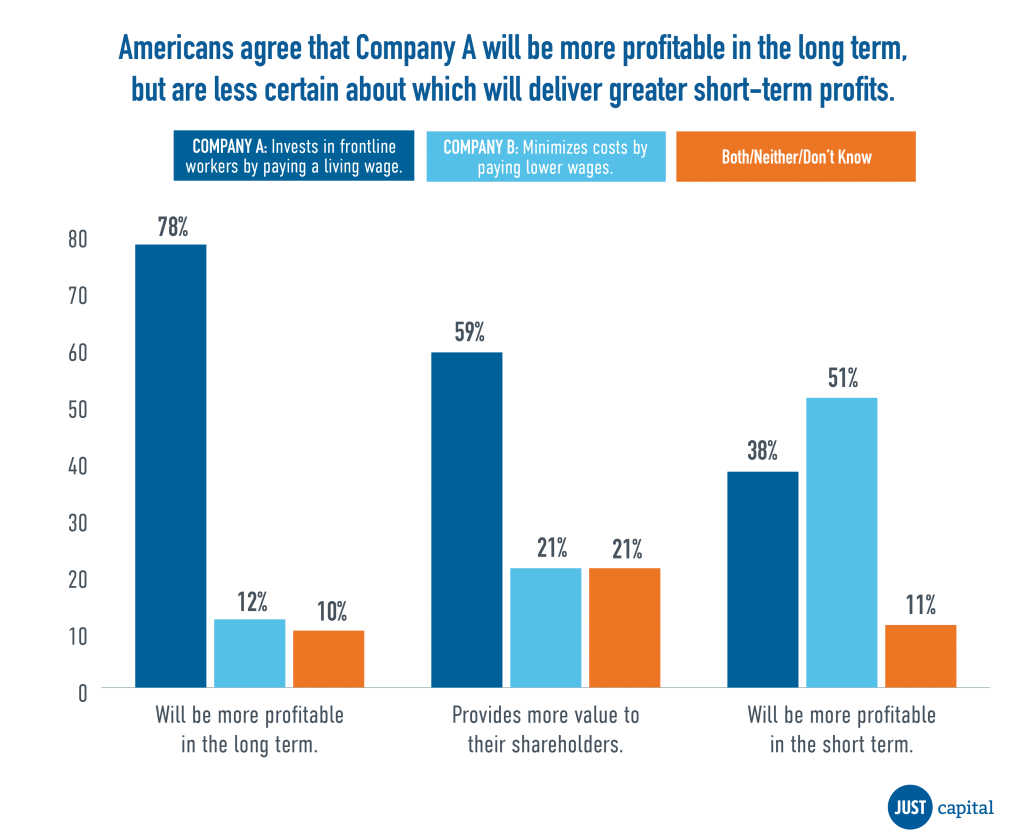 When it comes to serving its shareholders, respondents largely agreed that the company that pays a living wage (Company A) will be more profitable in the long term and provide more value to shareholders – reinforcing their belief that Company A has a competitive advantage through its workforce investment. While Americans clearly see the long-term advantages of Company A’s practice, higher percentages believe that the company that minimizes costs by paying lower wages (Company B) will deliver more profitability in the short term. 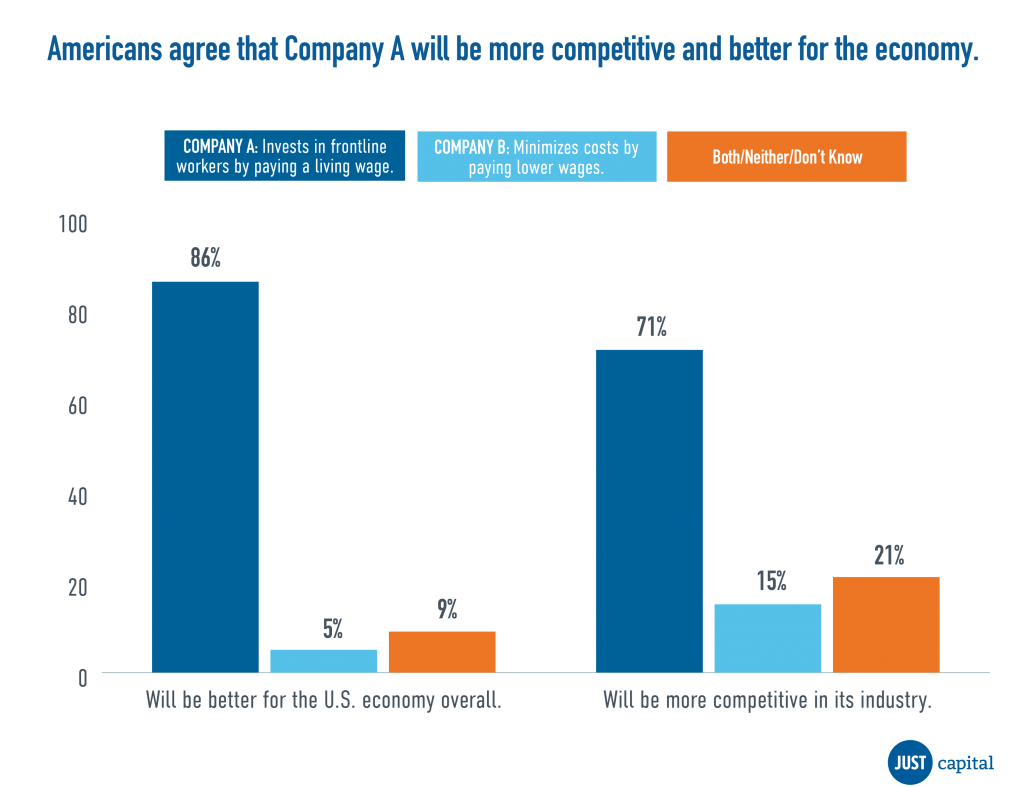 Despite economic tumult and seeming division across the political and media landscapes, Americans are aligned in their belief that companies should pay their workers a living wage, provide key benefits to ensure the economic security of their workers, and disclose their pay practices. They view these practices not only as more ethical, but as a way to deliver value to multiple stakeholders – workers, customers, and shareholders – and drive competitive advantage. As our nation continues forward in this period of economic uncertainty, it’s increasingly important that companies not shy away from commitments to more just and transparent wages. Now is the time to double down on efforts for workers, ensuring their financial well-being, better service for customers, and ultimately, better returns in the market.