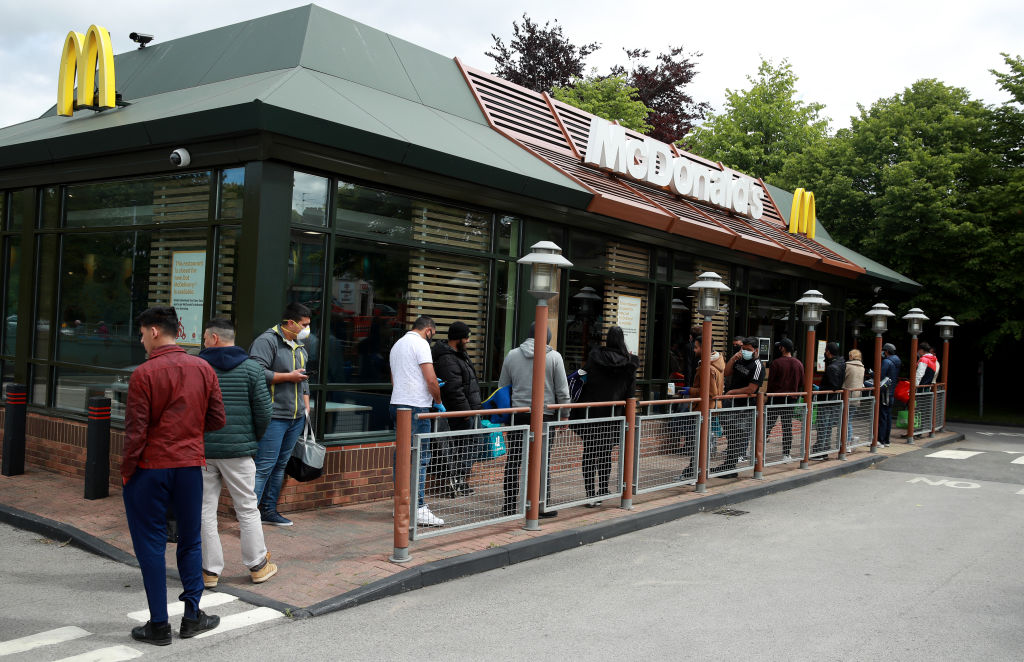 Sam Schrager is JUST’s Director of Metrics and Data Analytics. He is joined in this collaboration by Converseon‘s Chief Innovation Officer, Glen Kushner, and Advisor, Larry Friedman. Converseon uses machine learning to track perception of brand purpose on social media using a combination of natural language processing, social intelligence, and advanced analytics. You can visit its Brand Purpose Intelligence Center.

The fight against the coronavirus pandemic is still far from over, and corporations are still determining how to safely serve their stakeholders, especially their workers and the communities they serve. In fact, as JUST Capital has noted, the pandemic has forced companies to take stakeholder capitalism more seriously than ever. As we consider where we are headed, there is value to looking at the lessons of the past year.

That’s why we decided to compare our complementary data sets for a look at how America’s largest companies responded to the pandemic and how the public perceived those actions. JUST’s data is drawn from its COVID-19 Corporate Response Tracker, a tool thoroughly measures the policies and actions of the country’s largest companies, and Converseon’s Brand Purpose rating, a perception score based upon AI-collected social media posts from the public, over the same time frame.

Below, we’ve taken 11 of America’s most recognizable companies and found that for the majority, the public was in alignment with how the company responded, but that for others, there was a sharp disconnect due to the impact of negative stories.

Comparing our ratings yields one of three results for each company.

If there is a Negative Public Perception Gap, the public reacted more negatively on social media toward that company’s brand relative to the quality of that company’s public response. The team at Converseon believes that by analyzing public perception and reactions on social media, brands can identify what they feel are negative perception gaps, for the sake of better alignment.

A Perception Alignment indicates that the public’s reaction was in line with the relative quality of the public corporate response.

And then a Positive Perception Gap exists where the public was reacting more positively than the way the company’s public actions would otherwise indicate. 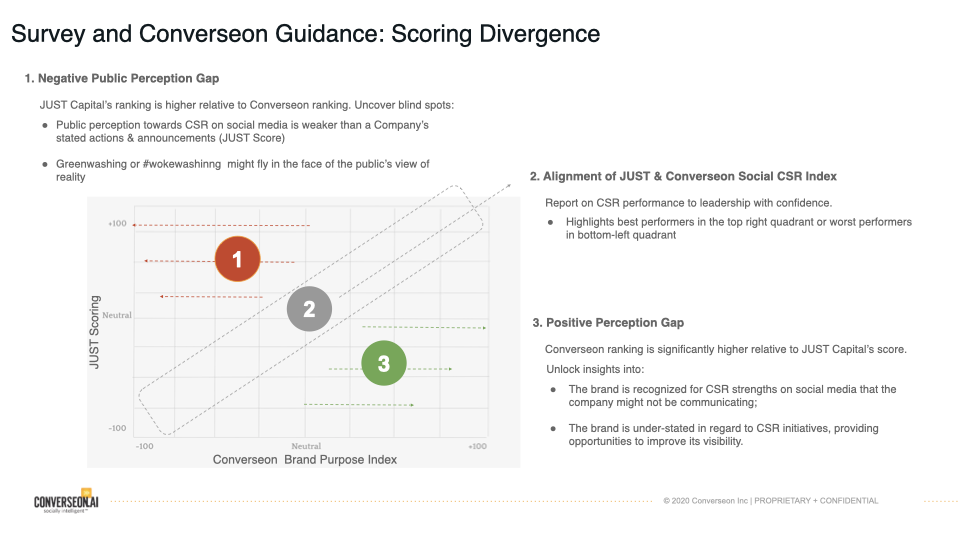 (Converseon)To illustrate these three categories, we’ll walk through the example of 11 companies included in the Forbes Corporate Responders list from May, powered by JUST’s data, which ranked how large corporations immediately responded to the onset of the pandemic in the U.S. 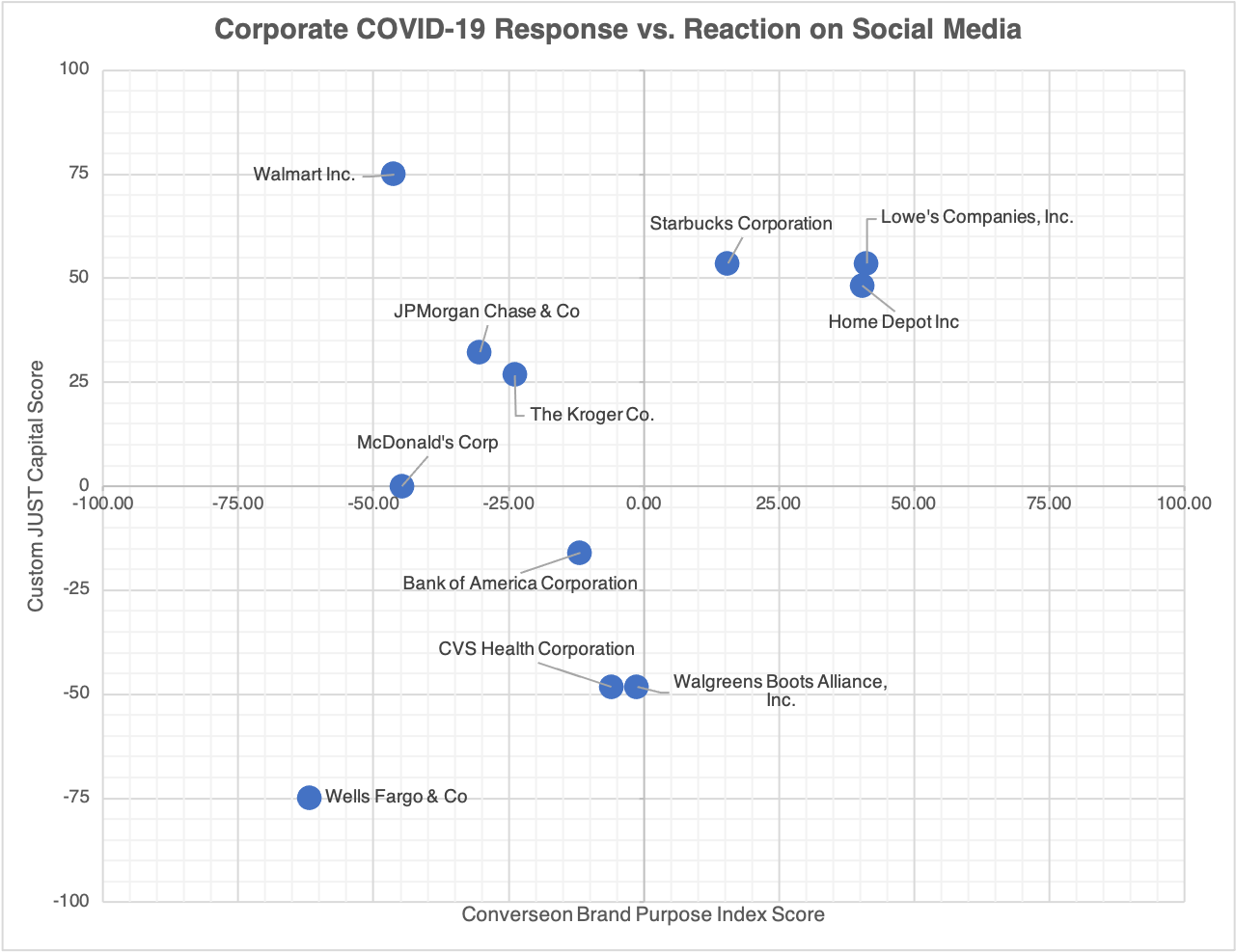 Reasons for Divergence: The McDonald’s Example

According to the Forbes Corporate Responders list, McDonald’s scored a 3.64 out of a scale of 5 on its corporate COVID-19 response, as of May, and a score slightly above zero for its Brand Purpose. Reasons for this score include executives voluntarily cutting their base salaries by more than 25%, an expanded paid sick leave policy to address employee wellness concerns, and about $50 million worth of “Thank you Meals” given for free to public safety and health workers. During this same time period, there was a significant push on social media supporting workers who were demanding a better paid sick leave policy and higher pay. It is also worth noting that JUST assesses McDonald’s corporate workforce, and public perception of the brand includes both its assessment of the corporate leadership and the leadership of the company’s primarily franchise restaurants. 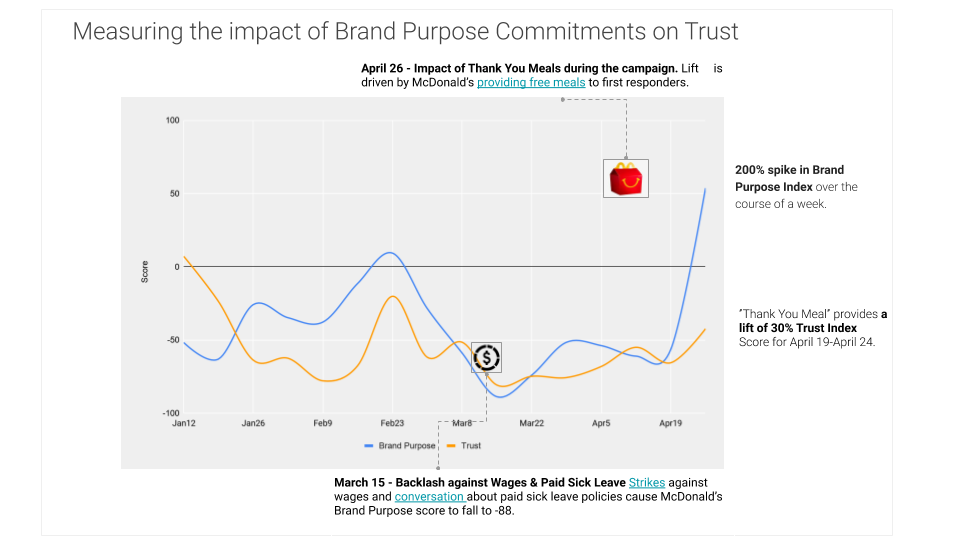 Brand perception dipped to its lowest over this period in mid-March, coinciding with strikes. There was also a high profile video feature a few days later from the New York Times Opinion team that highlighted workers calling for paid sick leave and more safety precautions. Brand perception rebounded a month later with McDonald’s announcement of Thank You Meals to frontline workers.

By tracking in-the-moment perception as events occur, aspects of the reaction against McDonald’s vs. its relatively positive corporate response become more clear. As Eater noted in March: “McDonald’s says over 90 percent of its stores worldwide are operated by franchisees, and notes that franchisees, while required to adhere to state and local sick leave laws, are considered independent business owners. The McDonald’s Corporation can recommend sick leave policies to its franchisees, but — according to the company — the franchisees do not have to implement them.”

In that initial period, McDonald’s corporate policies were relatively strong among other large companies in America, but the disconnect between corporate and franchisee requirements resulted in a Negative Perception Gap.

As we all know, the COVID-19 infection continued to ebb and flow throughout the year, and McDonald’s notably announced franchisee safety inspections in November after a meeting with franchise owners around health and safety. As we have seen, such a move was in line with correcting for what was the biggest pain point in the early stage of the pandemic.

Key to the guiding philosophy of stakeholder capitalism is that all stakeholders – workers, customers, communities, the environment, and shareholders – are taken into account in corporate strategy. The pandemic has dramatically shown that both effectively communicating how actions fit into an overall guiding purpose and carefully listening to what workers and customers are demanding are essential for leadership that benefits all stakeholders.

This, of course, is easier said than done when it comes to massive, global corporations. That is precisely why we need to make use of an integrated view of the marketplace, combining insights from diverse sources to understand perception gaps, and identifying investments that are most critical to make.