In collaboration with our survey research partner, The Harris Poll, JUST Capital has been polling the American public on how they expect companies to respond to the most crucial issues of 2020, including the COVID-19 pandemic and our national reckoning with racial injustice.

With Election Day less than a week away, and concerns of a contested election mounting, we expanded our recent polling asking Americans what role they think companies and corporate leaders should play in upholding and protecting democracy.

Here’s what they had to say:

Over the last few months – and especially as we inch closer to November 3rd – there are worries on both sides of the political divide about a potentially contested election. JUST Capital reached out to Americans to learn whether they believe companies should get involved in the election cycle, and how they can best serve the public.

More than eight in 10 agree that the health of our economy is dependent upon the strength of our democracy, the implication being that it is in the best interest of companies and corporate leadership to protect and uphold our democratic process.

We recently heard this sentiment echoed by several prominent CEOs at our Forbes JUST 100 Virtual Summit.

Microsoft CEO Satya Nadella remarked: “As an American company and as a tech company, our standing in the world and in the U.S. comes because of the vibrancy of American democracy…There is a wide gamut of things that we should do to ensure democratic institutions continue to thrive, as all of us as citizens and as businesses depend on these institutions being strong.”

And PayPal President and CEO Dan Schulman elaborated: “Our whole democracy relies on rising above your own self-interest. Creating a healthy economy, a healthy capitalism, and a strong democracy…that’s crucial for our future.”

This week, a coalition of business associations including the U.S. Chamber of Commerce, Business Roundtable, National Association of Manufacturers, National Retail Federation, and others, signed a similar statement declaring that “the strength of our nation’s democracy depends on the integrity and fairness of our elections.” Recognizing that it may be weeks until the outcome of the election is settled, the letter urges Americans to “support the process set out in our federal and state laws and to remain confident in our country’s long tradition of peaceful and fair elections.” Their statement comes on the heels of business leaders, through the Civic Alliance and Leadership Now, speaking up for a safe and fair process. It’s extraordinary that the statements need to be made, but we’re glad to see business leaders stepping up in support of our democractic process, as it’s exactly what the American public wants to see from corporate America today.

Corporate Leaders Should Help Out and Speak Out

The coronavirus pandemic has expanded the voting process to accommodate early voting and absentee balloting. Yet, even with these measures in place, the process is somewhat fraught. Voters need to carefully manage ballots, privacy envelopes, and signatures, while the rules differ from state to state and it’s challenging to keep everything straight. A significant 72% of Americans think that business leaders have a role to play in assisting their employees during this election by providing helpful information about voting in their state.

And amid growing concerns about the democratic process itself, a majority of Americans agrees that corporate leaders have some or a great deal of responsibility to speak out publicly against voter intimidation, for a peaceful post-election period even if there’s no clear winner on Election Day, for a full and proper counting of ballots in the event of a contested election, and for civil political discourse during the election period.

Media & Advertising Have an Especially Strong Role to Play

As we near Election Day, our fragmented media landscape is fraught with misinformation from bad actors around the globe. Seven in 10 Americans tell us that companies can help mitigate dis- and misinformation in the following ways:

Remarkably, responses were not as divided as many may expect within our charged political environment, with strong majorities of Conservatives, Moderates, and Liberals showing similar levels of agreement on many of the following statements. All three groups are particularly aligned on the concept that “the health of the economy depends on the strength of our democracy,” averaging 83% agreement across ideological lines. 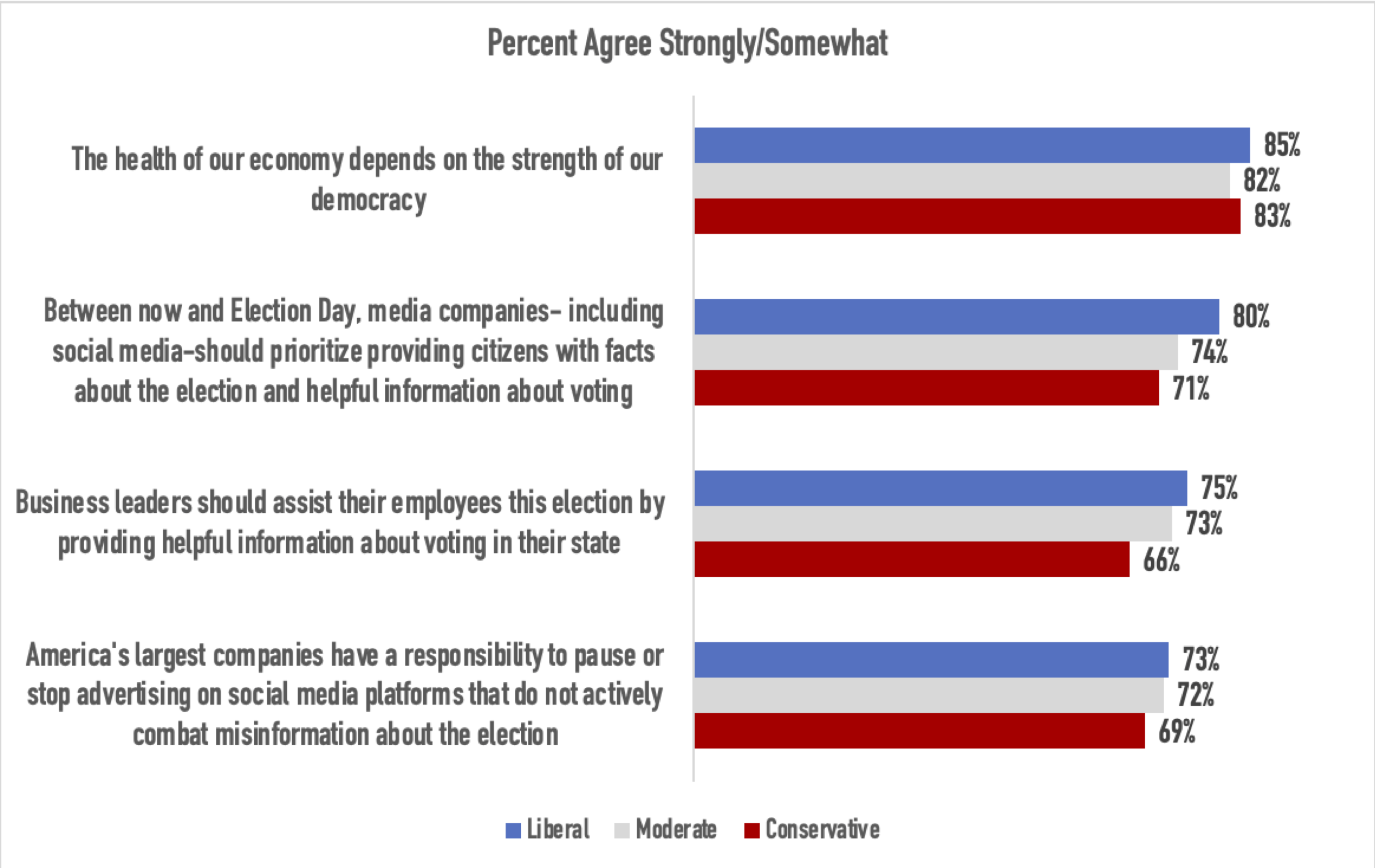 Majorities across ideology believe that business leaders have at least some responsibility to speak out publicly against election-related issues, though Liberals were more likely to feel more strongly than their counterparts, with about a 10-point spread between Liberals and Conservatives across the various issues:

For more on our election-related polling, check out the results of our last survey where we learned that three-quarters of Americans say companies have a role to play in preserving and protecting democracy by making voting more accessible; giving workers time off to vote; lobbying for all stakeholders, not just shareholders; and by taking a stand against dis- and misinformation campaigns across our nation’s communications platforms by beating back disinformation and hacking attempts.

This survey was conducted online within the United States by The Harris Poll in partnership with JUST Capital from October 20-22, 2020 among 2,055 U.S. adults ages 18 and older. This online survey is not based on a probability sample and therefore no estimate of theoretical sampling error can be calculated. For complete survey methodology, including weighting variables and subgroup sample sizes, please contact Jennifer Tonti.