As the 2020 Election Approaches, Americans Say Companies Have a Role to Play in Upholding and Protecting Democracy 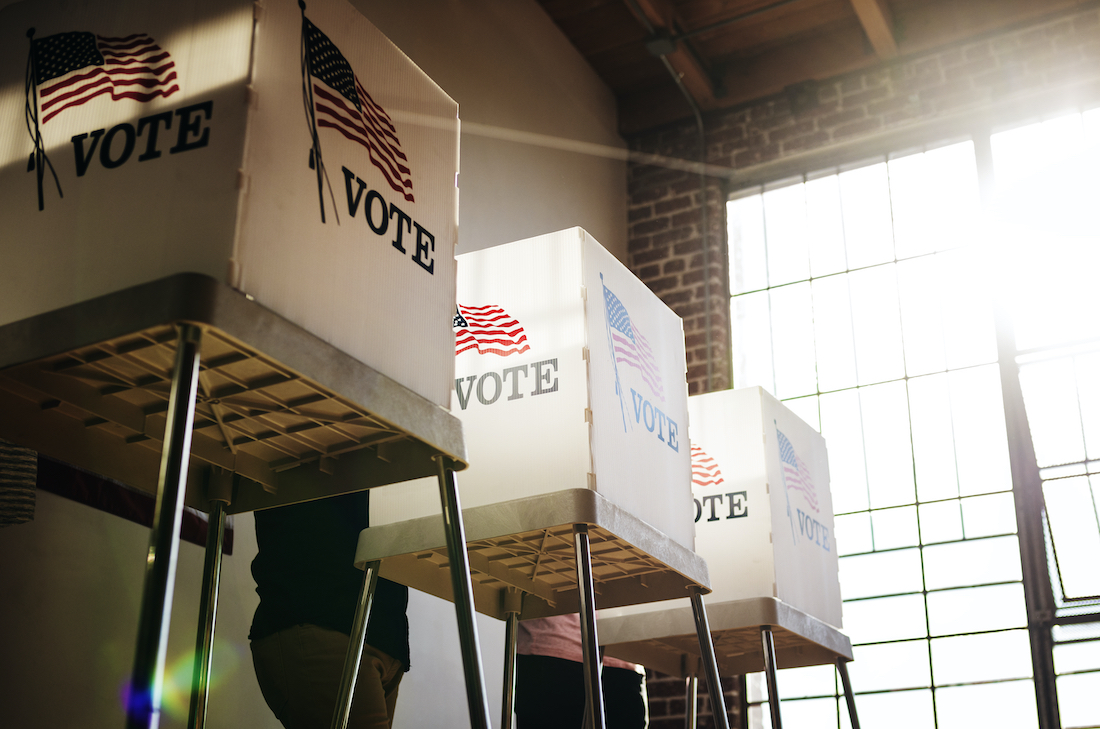 This report was written by Jennifer Tonti and Jill Mizell.

In collaboration with our survey research partner, The Harris Poll, JUST Capital has been polling the American public on how they expect companies to respond to the most crucial issues of today, including the COVID-19 pandemic and our national reckoning with racial injustice.

With the 2020 presidential election fast approaching, this week we take a look at whether – and to what extent – the public expects companies to uphold democracy. Do companies have a role to play? To what degree? How can they best serve the public?

Make voting accessible. The No. 1 way Americans believe companies can support the democratic process is by making voting more accessible to their workforces. Just about seven in 10 people – almost equally across various demographics and crossing party lines – say that allowing workers time off to vote is a key means of protecting democracy in the United States.

Lobby for all stakeholders. Close to two-thirds (65%) agree that companies can take a moderate to significant role by restricting lobbying efforts that favor shareholders over other stakeholders.

Beat back disinformation and hacking attempts. Especially as we get closer to Election Day, Americans want companies to take a stand against  dis- and misinformation campaigns across our nation’s communications platforms. More than 60% of Americans agree that companies can play a moderate or significant role by identifying and debunking falsehoods and propaganda, as well as by combating cyberattacks and hacking attempts targeting the U.S. election system. 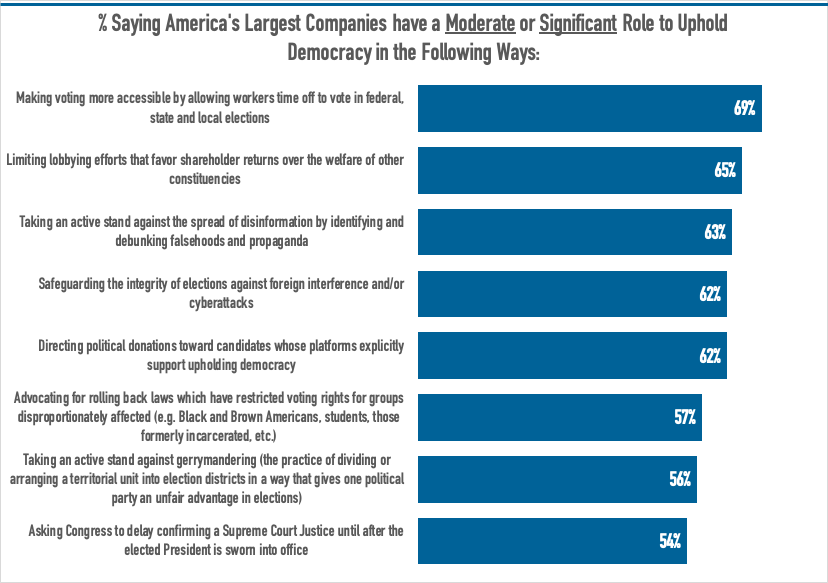 While the majority of respondents believe corporations have a moderate or significant role in upholding democracy in all the ways listed above, support varies significantly by different socio-economic characteristics. Education, income, and employment status correlate with some of the largest gaps in agreement between subgroups. 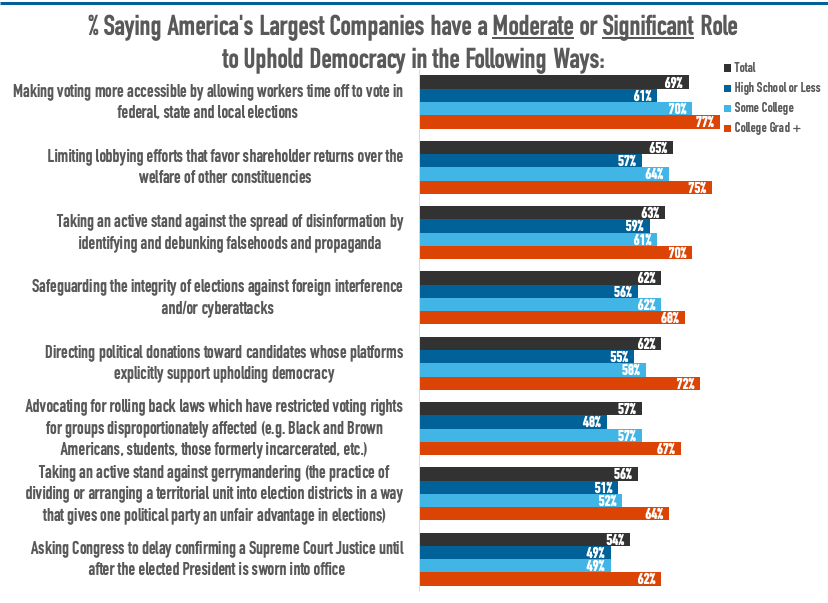 Black Americans show greater support for corporate action to protect democracy when compared to Hispanic and white respondents on a number of issues. 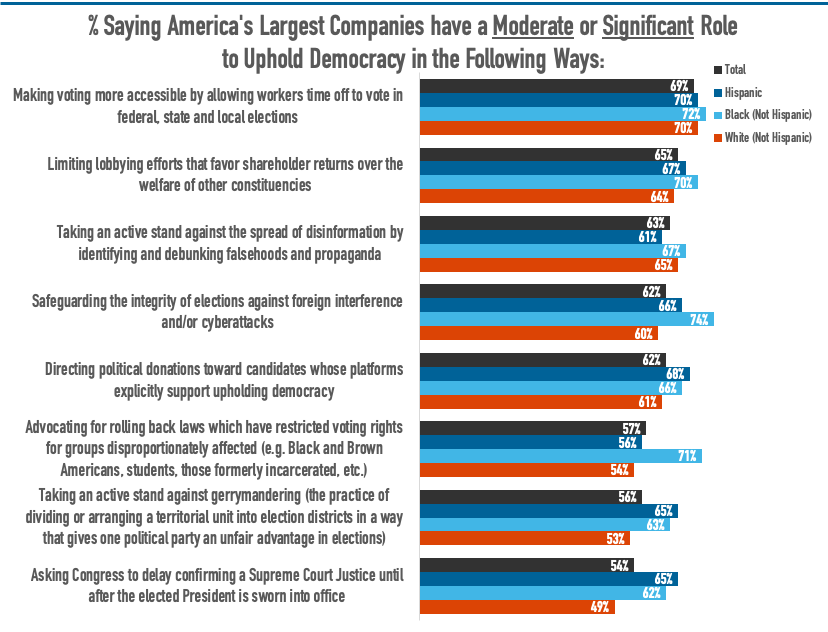 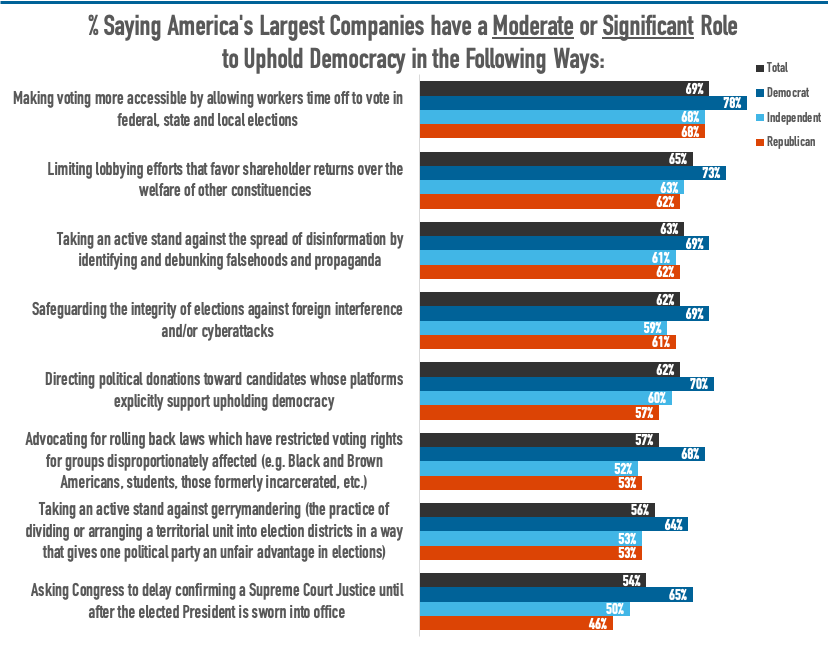 This survey was conducted online within the United States by The Harris Poll on behalf of JUST Capital between September 24-28, 2020, among 2,014 U.S. adults ages 18 and older. This survey is not based on a probability sample and therefore no estimate of theoretical sampling error can be calculated.