For the past three years, JUST Capital has been building the case that companies generate higher returns when they invest in their workers, protect the environment, treat their customers well, and engage with local communities.

The latest installment in our JUST Alpha research series shows that the highest ranked companies not only generated a Return-on-Equity (ROE) 6.4 percentage points higher than their peers, but that they also have higher net and operating margins, and command a meaningful valuation premium over their lower-scoring peers.

This supports what we have long suspected, and what our empirical analysis corroborates: that just business is simply better business.

The research was carried out through a detailed analysis of the profitability and corporate practices of 875 companies in the 2017 JUST Capital Rankings, comprising the largest, publicly traded U.S. corporations. In order to test the hypothesis that just companies are more profitable, we looked at companies’ 2018 profits, providing an out-of-sample evaluation of financial performance not otherwise captured by the 2017 Rankings. To help control for look-ahead bias we focus on ROE in the year following their JUST Capital ranking release. After breaking this list into five industry-neutral quintiles according to their rank, we found that companies in the top quintile of JUST scores delivered a median 2018 ROE of 20.1%, versus the 13.7% ROE of those in the bottom quintile – a difference of 6.4 percentage points. 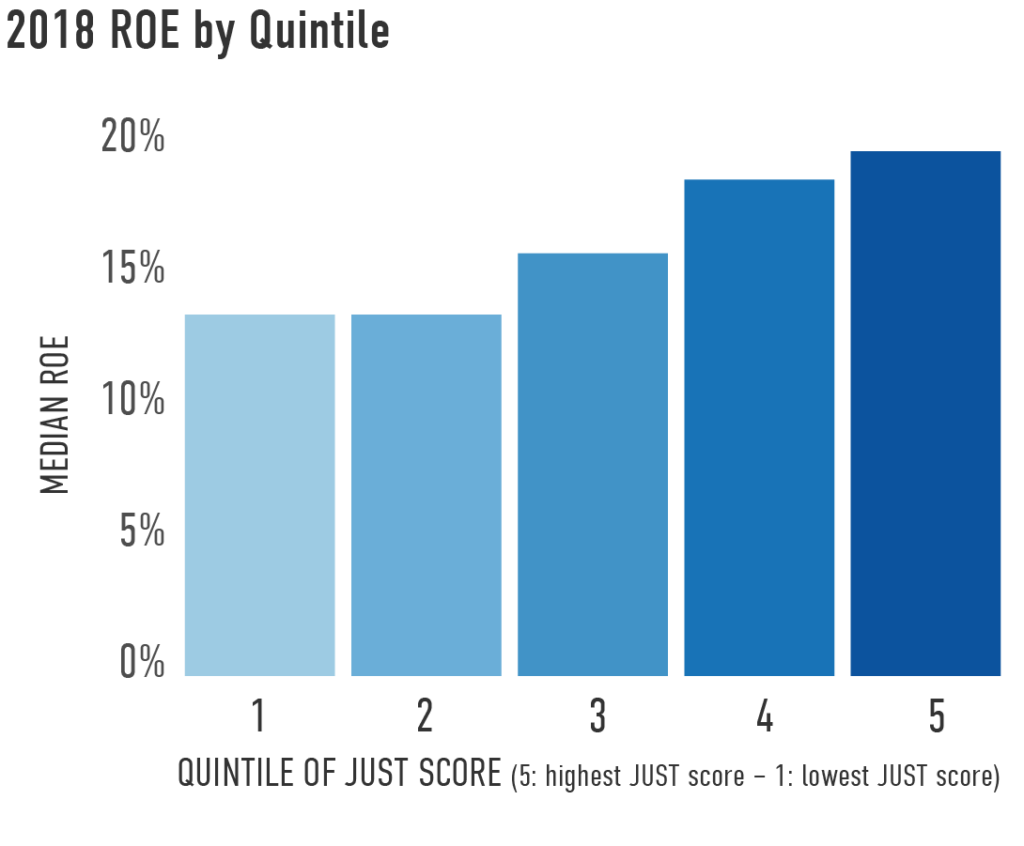 We then applied a Dupont decomposition analysis to evaluate the potential causes of this outperformance, finding that top quintile companies not only have higher net margins – a company’s profit per dollar of sales – they also display consistently higher operating margins – a company’s margin on earnings before interest and taxes. The implication is that, rather than relying on financial engineering or tax management to drive margins, top quintile companies have higher underlying profitability.

The JUST Capital Rankings are based exclusively on how companies perform across a range of issues identified by the public as core components of just business behavior. These include factors such as fair pay for employees, respect for customer privacy, support for local communities, healthy and inclusive work environments, and the creation of quality, beneficial products. Unlike commonly used methods in the sustainable investing field to consider financial materiality, these just business behaviors were derived not from Wall street analysts, but from the results of our annual survey of the “Main Street” American public, which has captured the opinions of nearly 100,000 Americans on a fully representative basis since 2015. Knowing that higher operating margins are responsible for the higher ROE of the most just companies in each sector, we wanted to understand which of these core just business practices drive outperformance, as measured by net margins.

A regression analysis of net margin on the components of just business behavior measured by JUST Capital in 2017 revealed that approximately 35% of the variation in net margin (r-squared) can be accounted for by these components, sourced from the wisdom of “Main Street.”

In particular, we found that a company’s net margins are most affected by its industry and the number of jobs it has in the U.S., and whether it: 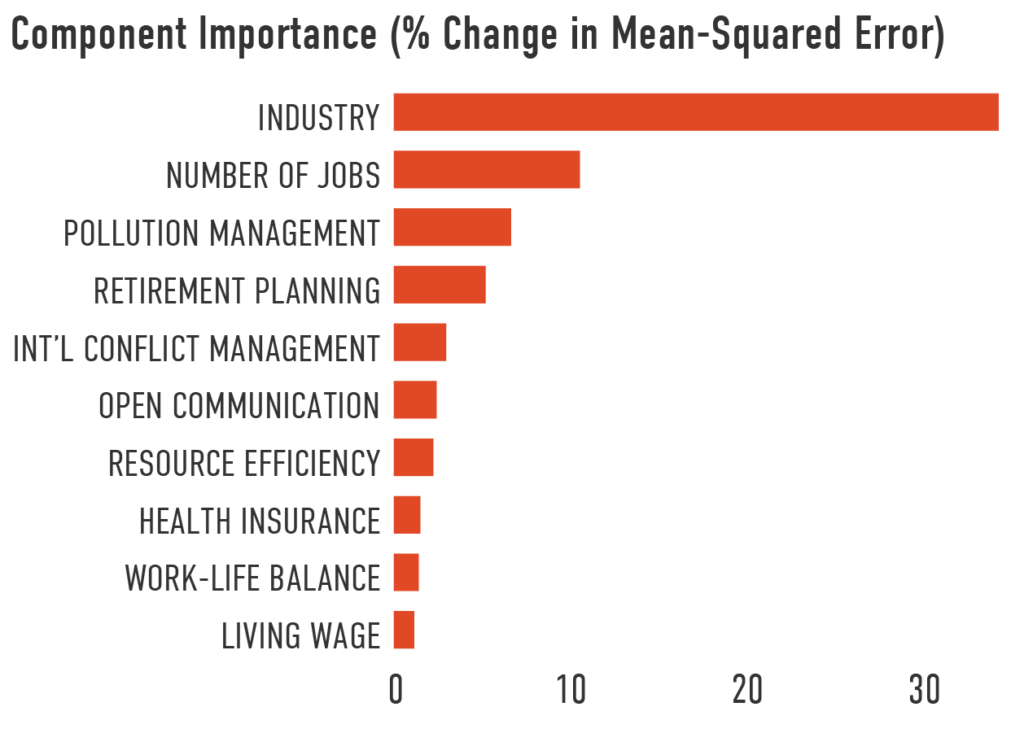 From these findings, we see that strong environmental performance and fair treatment of workers, especially, drive higher net margins. Of note is that industry is the strongest factor to explain differences in net margin, highlighting the importance of constructing industry-neutral quintiles.

There is also evidence that investors are willing to pay more for companies that perform better on these JUST metrics. We found that companies in the higher quintile of JUST scores command a valuation premium over lower-scoring companies. The difference in price-to-book value between quintile 5 and quintile 1 companies is approximately one point. The clear implication is that the corporate reward for just business behavior is reflected in both financial statements and market valuations. 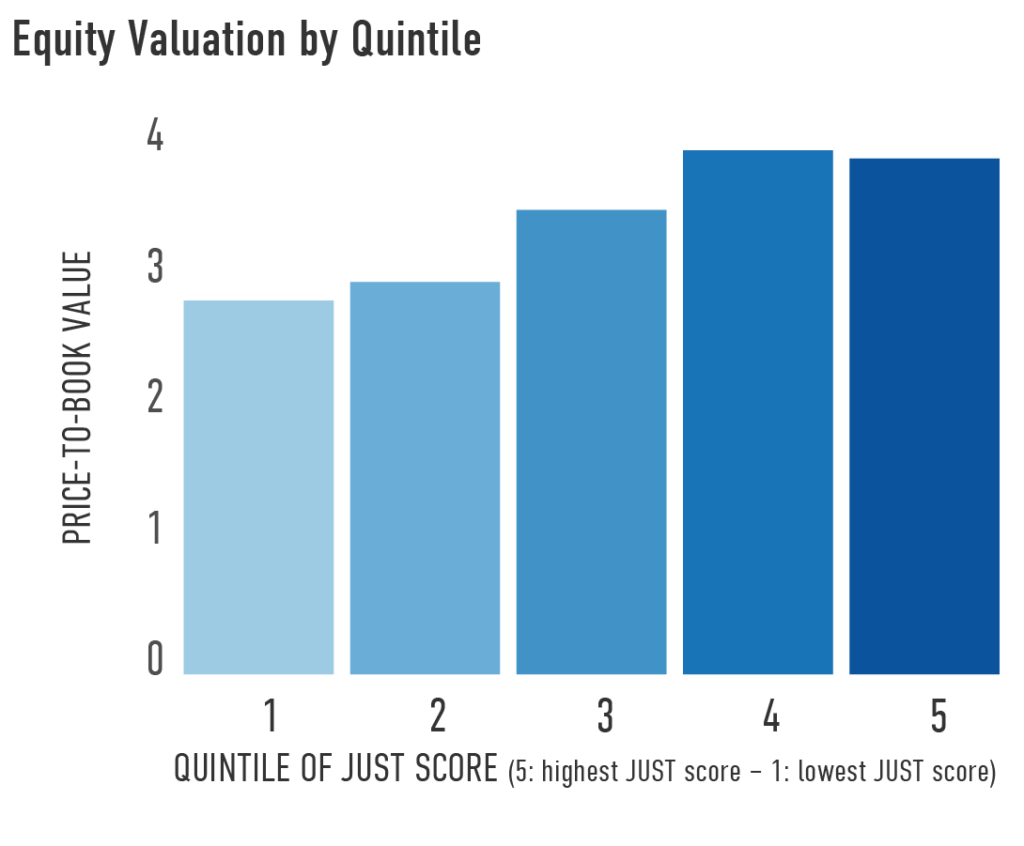 This is what more just capitalism looks like, and our body of JUST Alpha research makes a strong case that when companies attend to the needs of all their stakeholders, and not just shareholders – by paying workers well, treating customers with respect, supporting local communities, and protecting the environment – everybody wins. Just business is better business and more effective in creating long-term value for everyone.

Download PDFs of the full report and executive summary.