In recent months, our country has faced profound turmoil – from the devastating toll of global pandemic and economic fallout, we’ve seen over 100,000 lives lost in the U.S. coupled with unprecedented levels of unemployment. And in the past two weeks, following the killing of George Floyd, we careened into a brutal reckoning with systemic and virulent racism, spurring protests and unrest across the country.

The impacts of these events are unfolding moment-by-moment – on streets and in living rooms, in boardrooms and on the factory floor, in hospitals and in supermarkets – across the country, where Americans contend with illness, with inequity, with loss. What future comes of this time of turmoil remains to be seen, but what’s clear is that it has revealed an economic system that propagates inequality and instability – a system that we now have the opportunity to repair and rebuild together.

JUST Capital has been working throughout this time to better understand the impacts of COVID-19 on America’s workers, customers, and communities – tracking the actions of America’s largest employers as part of our COVID-19 Corporate Response Tracker, and surveying members of the public to identify their views of just business during this time and their priorities for corporate action.

Today, we’re sharing a new and critical phase of this work – a survey of Americans that seeks to better understand what they expect from corporate America today and into the months ahead. In May, we partnered with The Harris Poll to conduct this survey – which asked 1,000 U.S. adults how business should evolve for a better tomorrow.

We unpack those results below, looking at perception across the three phases of the coronavirus crisis – the Response, the Reopening, and the Reset, to chart what a more just economy looks like at every step of the way.

The pandemic has placed capitalism and U.S. corporations at a crossroads with rapidly shifting expectations around the role of business in society. Although most Americans (60%) agree that companies are stepping up to protect the health, safety, and economic security of their workforces during the COVID-19 pandemic, almost nine in 10 Americans agree that this is an opportunity for large companies to hit “reset” and focus on doing right by their stakeholders. 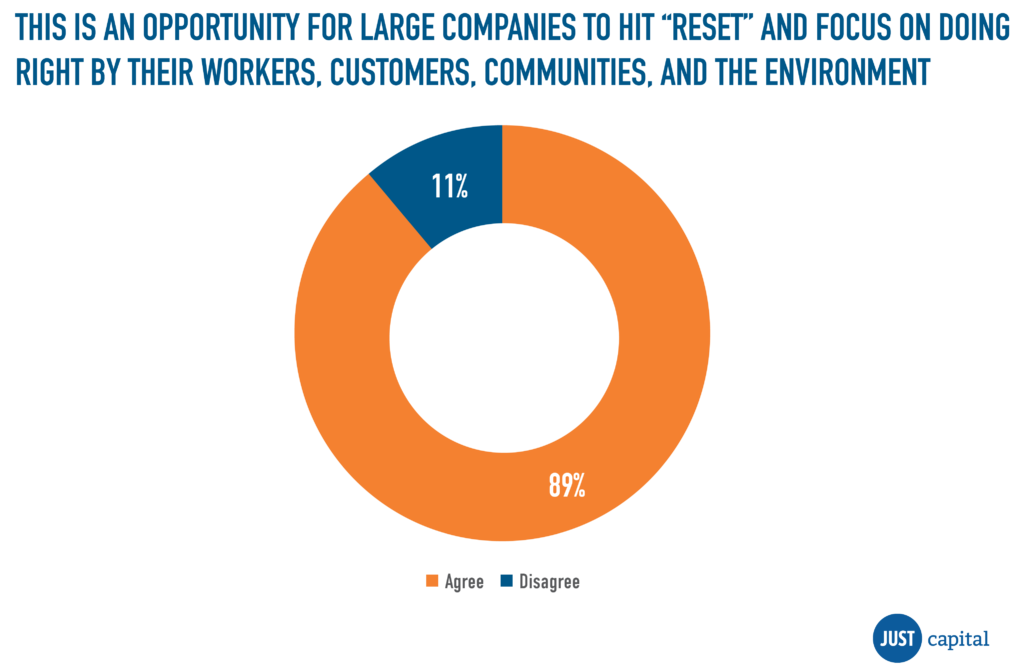 Where Are We Today? The Three Phases of the Crisis

To help provide companies with clear insights into what Americans want from them as we collectively navigate the crisis, it’s helpful to contextualize where we’ve been, where we are today, and where we have the opportunity to lead moving into the future.

Phase I: The Response

Throughout our bi-weekly polling work over the first couple months of the response phase, Americans were consistent in their opinions about what they expected companies to prioritize: worker health and safety, paid time off, flexible work arrangements, and hazard pay, all the while endeavoring to avoid layoffs. 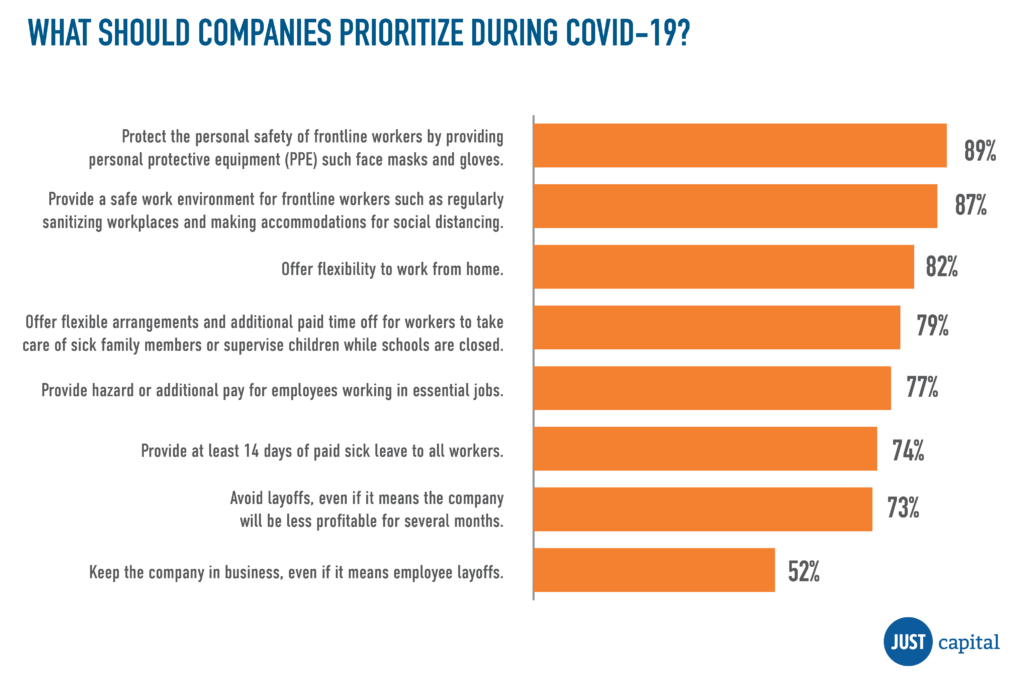 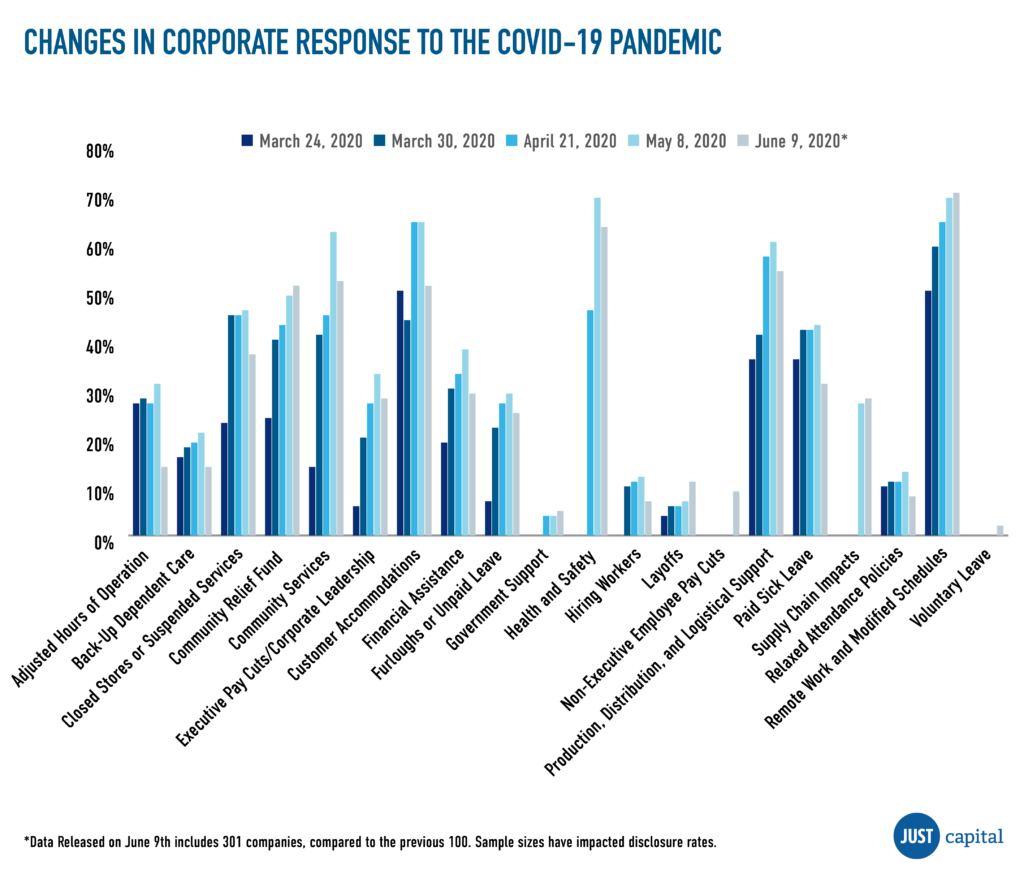 The chart above shows the changes in corporate disclosure since we launched the Tracker in March. Between May 8 and June 9, we expanded the number of companies featured from 100 to 301. As a result, it is important to note that we cannot meaningfully compare changes in disclosure rates over time beyond May 8.

Now that we’re in June, we’ve entered the reopening phase, where unlike the blunt response of initial lockdowns and closures, companies will need to be agile and adapt quickly to balance both health and safety concerns with financial concerns of getting people back to work.

When pressed to make a choice between two options for returning to work, three out of four Americans say large companies should prioritize the health and safety of people, even if it means taking a more cautious approach to re-opening. Only one in four say large companies should prioritize the economy by reopening as soon as possible, even if it means more people could get sick. While these choices are not mutually exclusive, as there are ways to restart the economy to serve both economic and health goals, it is important to note that what the public prioritizes at this moment is much the same as what we saw at the onset of the pandemic. 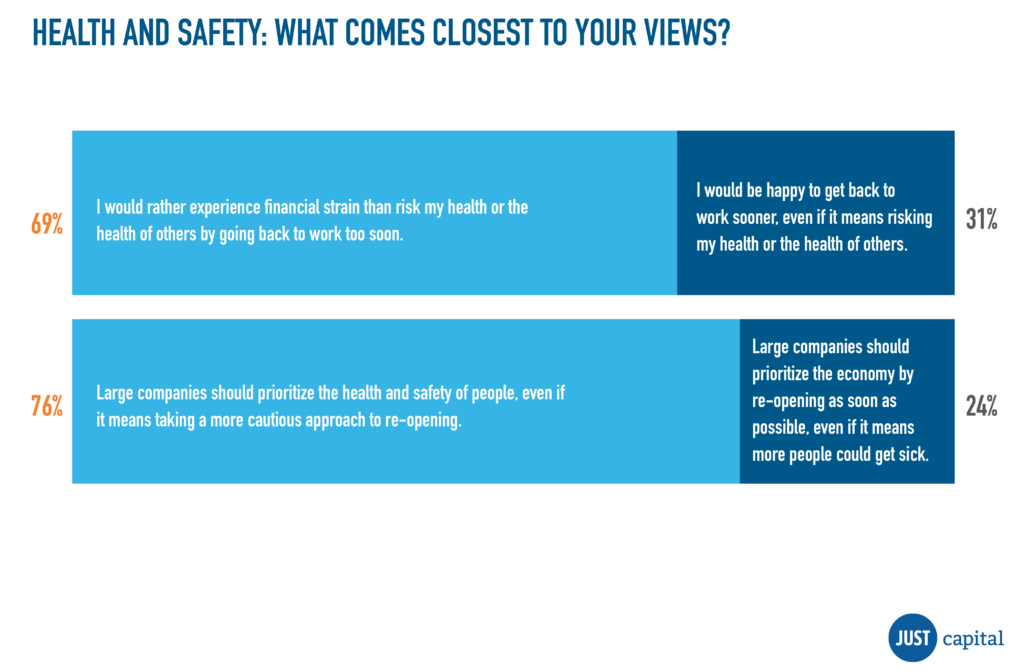 One of the core Just Principles we shared with business leaders back in March was to adopt practices to minimize job loss. The American public agrees. Especially since one in three Americans have been impacted by the pandemic in the past 60 days through wage cuts, benefit cuts, layoffs, or furloughs. And more than half are concerned that they are going to lose their job because of the coronavirus crisis.

In regards to the “how,” seven in 10 Americans believe CEO pay cuts can be a significant means of cutting costs and preventing layoffs (vs. three in 10 who view such cuts as more symbolic in nature). In fact, Americans believe reduced compensation for CEOs and other executives is the number one step large companies should be taking right now to avoid layoffs. From our partners at The Harris Poll, their research shows that 83% of Americans say that their opinion of a company improves when executives forgo salaries, bonuses, and other compensation. Despite the math, the perception is clear that outsized pay packages for CEOs will continue to be in the public’s crosshairs. 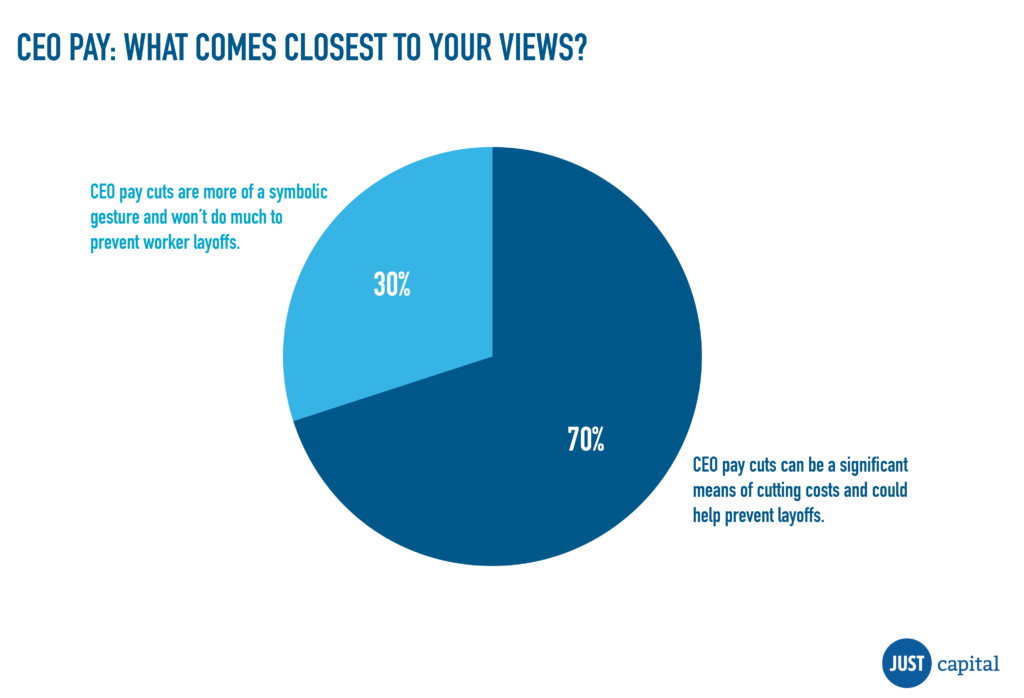 If companies plan to lay off employees, 62% of Americans say keeping access to healthcare for the duration of the pandemic is critical to support laid-off employees, with one of the most compassionate examples coming from Airbnb back in early May. In fact, more Americans prioritize healthcare above all other ways of helping workers through the crisis, including paying severance (42%) or paying for critical expenses (52%). Also, 56% of Americans believe companies should take support from the government to help cover wages during slowdowns. 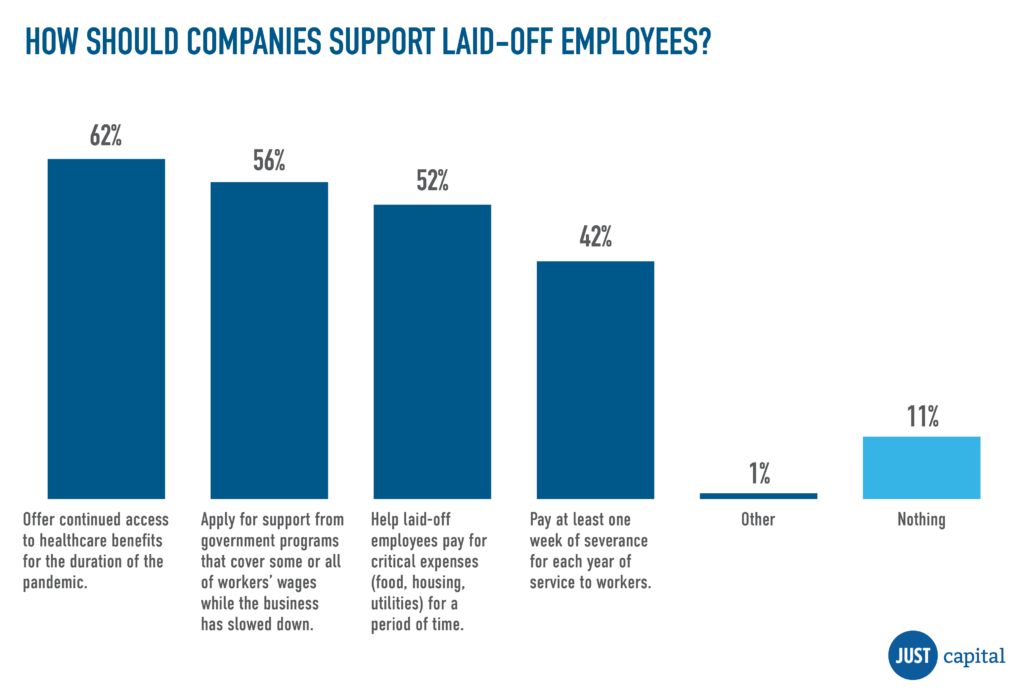 As we saw with the leaders at the top of the Forbes Corporate Responders list, companies that were the most communicative and transparent around their COVID-19 response actions – like Verizon, which held daily briefings for employees – led in the rankings. About 70% of Americans agree that their place of business has been communicating sufficiently about COVID-19, and by taking steps to address the pandemic in the workplace, respondents feel that their companies genuinely care about their well-being.

It is interesting to note that when we expanded the Tracker universe from the nation’s 100 largest to the 301 largest public employers, disclosure percentages decreased, demonstrating many companies need to increase transparency and communication with their workers, customers, and communities. 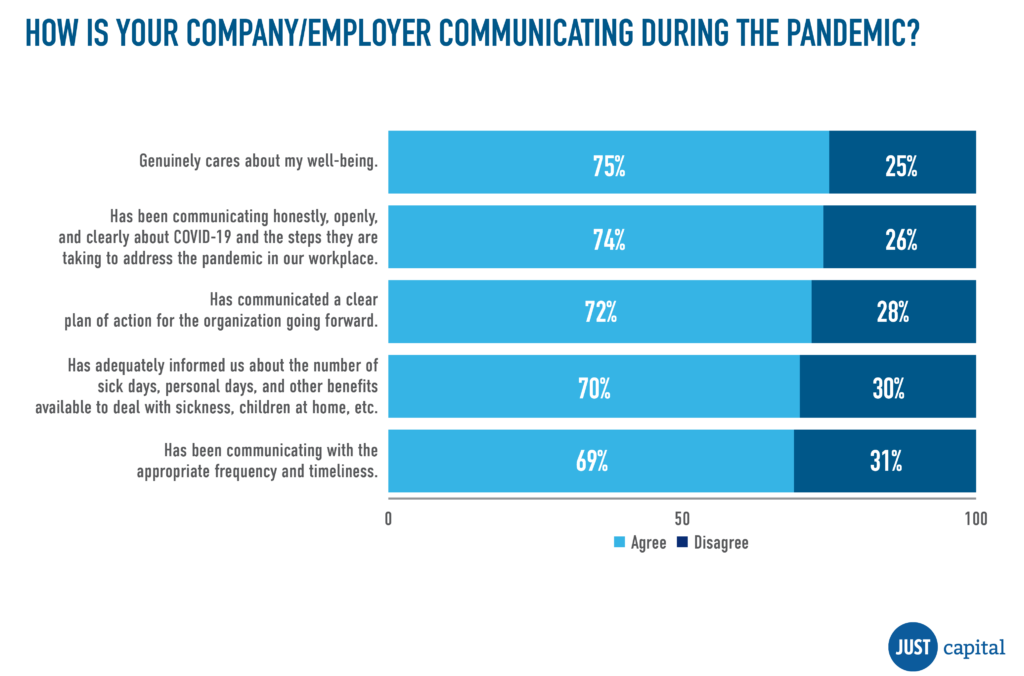 There are mixed results on companies’ commitment to engage their workforce on potential solutions around cost cutting and other ways out of the crisis. Only 28% say they had been asked about cost cutting measures to weather the economic crisis, although 47% said their workplace is open to input from employees on the topic. Significantly, those employed are willing to sacrifice for their coworkers – when presented with a forced choice, nearly 80% say they would take a cut in hours or pay rate, enabling a coworker to keep their job. 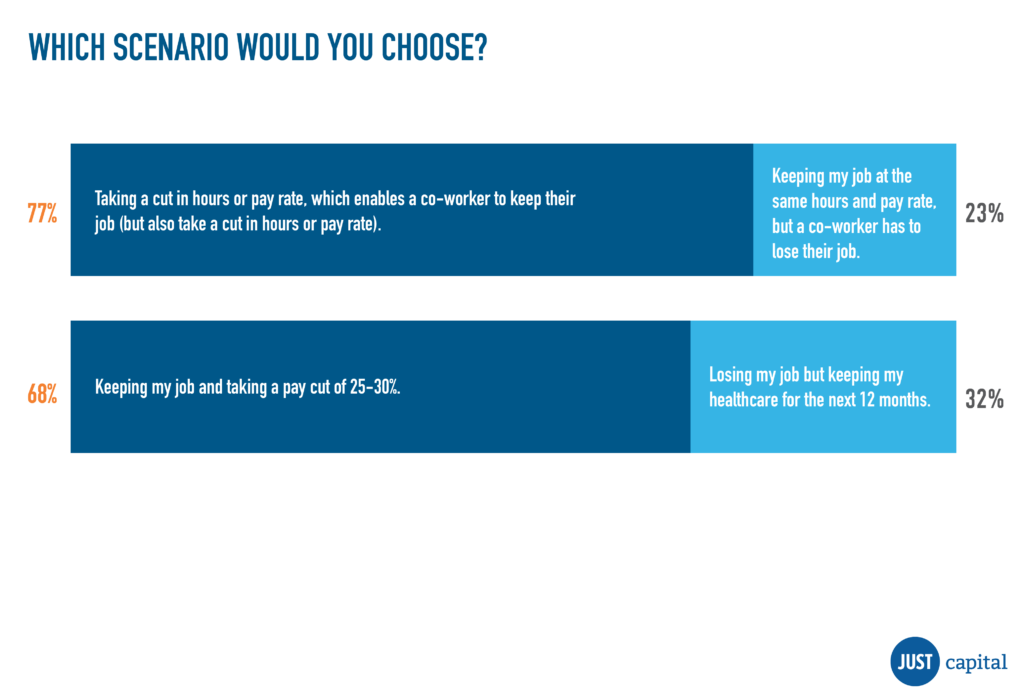 As we look to the future, companies need to think how to rebuild better on the other side of the crisis to better support its workers and stakeholders. About four in five Americans agree the pandemic has exposed underlying structural problems in our society and opened their eyes to acceptable and unacceptable corporate behavior. Americans overwhelmingly believe that the pandemic has landed our society at a critical crossroads, with nine in 10 agreeing that this is an opportunity for large companies to hit the “reset” button and focus on doing right by their workers, customers, communities, and the environment. 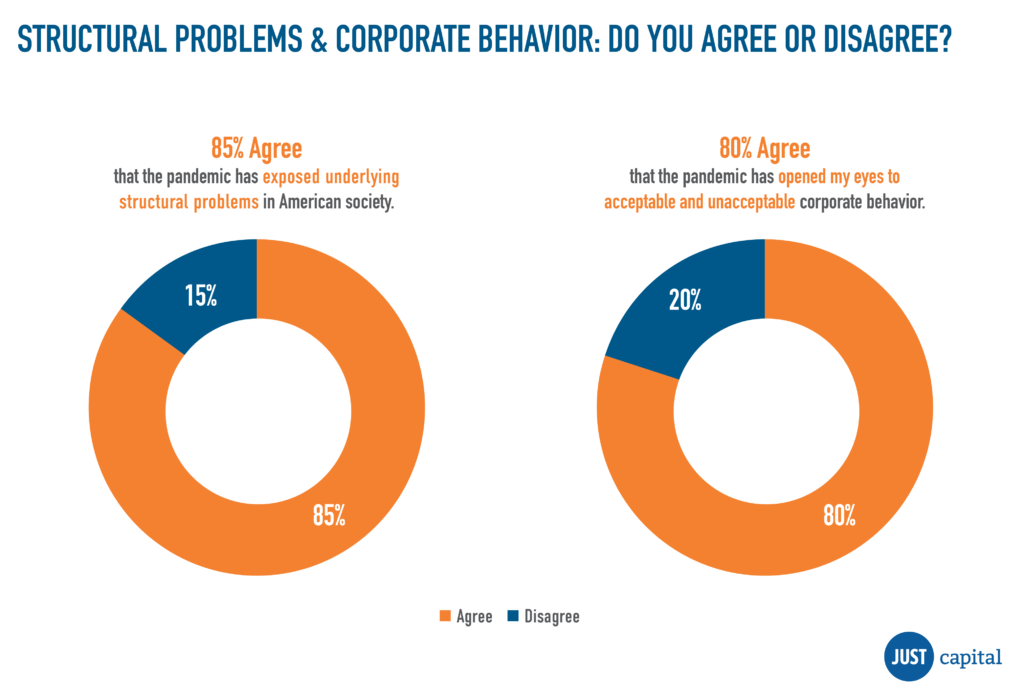 The pandemic has affirmed Americans’ commitment to policies that need to be extended for at least another year to support our country’s workforce, with two-thirds or more agreeing that companies should continue to provide paid sick leave (70%), higher hourly pay for essential workers (67%), work from home policies (75%), as well as continue to enforce health and safety measures (75%).

And Americans are willing to put these principles into action: 70% would take actions such as stopping to buy from, invest in, or apply for jobs at companies that roll back policies, and on the flip side, 75% would take specific action to support companies that keep these policies in place. 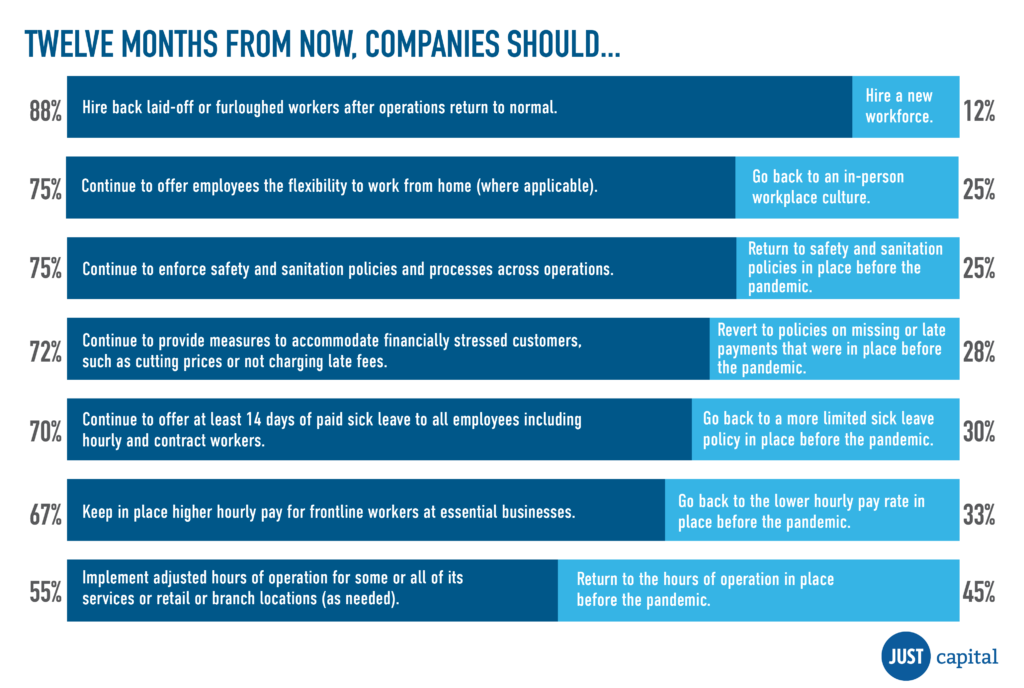 We asked Americans now that we are about two months into the COVID-19 pandemic, how, if at all, their views had changed on some key worker-related issues. Three out of four Americans support workers having the right to engage in collective bargaining for higher pay, healthcare, paid sick leave, and worker safety, with one in four of those supporting these policies more now because of the crisis. Similarly three out of four support a minimum wage that covers the costs of basic expenses, with 31% supporting it more now because of the crisis.

Separately in the survey, almost nine in 10 Americans want companies to hire back laid-off or furloughed employees rather than hire a new workforce. One respondent recommended in an open-end response to: “Hire back the furloughed workers, as new hires will cost valuable time and money to train.” The pandemic has also opened our collective eyes to the stark reality that more workers of color have lost their jobs and that corporate leaders need to actively prioritize equity in the workplace when considering hiring and layoff decisions.

We know from polling over 100,000 Americans over the last five years that people want to work for, buy from, invest in, and show support for companies that do right by their stakeholders. This moment is no different; in fact it is more pronounced. Three in four Americans say they will long remember the companies that took missteps in their response to the pandemic, and an even greater proportion – over four in five – will remember those that did the right thing by their workers by ensuring their health and safety or doing their best to avoid layoffs. 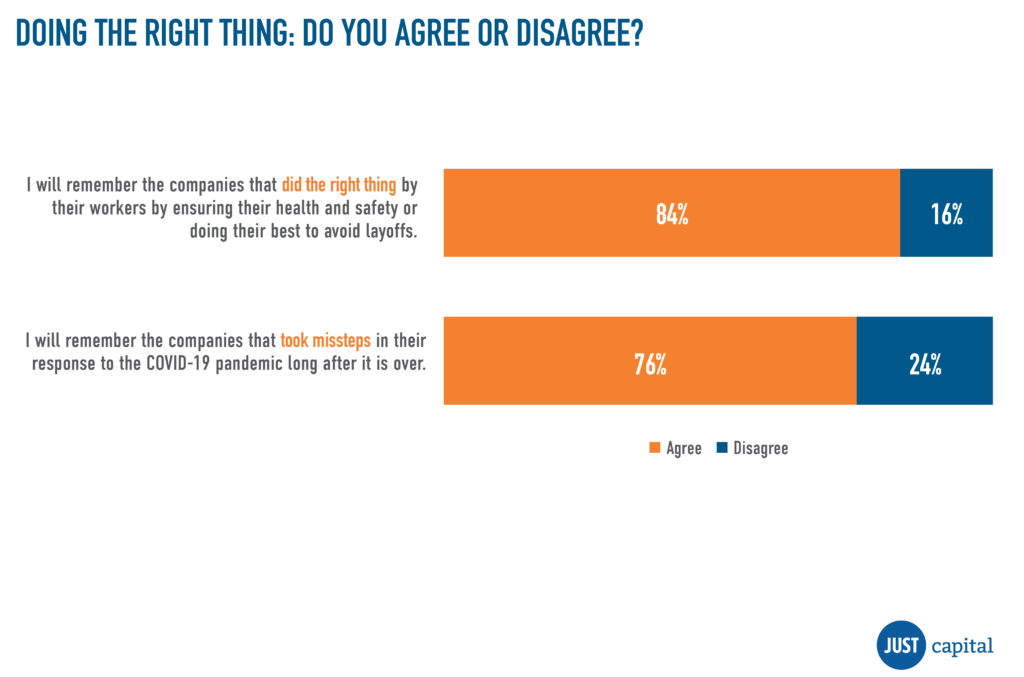 Americans overwhelmingly agree that we as a society need to use this crisis as an opportunity to fix what’s broken and find a better way of living. Americans are looking for companies to take the lead on key policy issues like paid sick leave, paid family leave, wage increases, healthcare, and increased flexibility to work from home. And the American public believes we need a more evolved form of capitalism to tackle the shift.

This more evolved capitalism must be based on our learnings from this time – that our economy has not been working for the majority of Americans, that business must play a key role in protecting the public, and that certain populations, including Black and Brown Americans, are tremendously vulnerable to both the health and economic impacts of crisis. When asked if they had been personally impacted by COVID-19, Black survey respondents identified as having been furloughed, laid off, or given a zero-hour schedule at double the rate of White respondents (Black respondents: 22%, 20%, and 21% vs. White respondents: 10%, 11%, and 5%, respectively).

We have faced unprecedented challenges over the last few months – and it’s not over yet – but we have the opportunity today to build better coming out of this pandemic, and deep social unrest. These views from the public provide a roadmap to how we can reset capitalism to truly serve all Americans, and build a more equitable society for tomorrow.