This summer has been one of the most tumultuous in recent history in the U.S., with ongoing wildfires, devastating hurricanes, and record high temperatures. The Washington Post reported in early September that nearly one in three Americans live in a county hit by a weather disaster. Polling from Pew Research Center, which tracks Americans’ views about key issues over time, shows that a majority (57%) say climate change is having at least some impact on their local community. What is more, the latest climate assessment report from the UN asserts that we are indeed experiencing climate change, and some of its effects may even be irreversible. Clearly, climate change is both literally and figuratively hitting close to home.

Climate change is here – the question now is: what do we do about it? How can society help mitigate the worst effects of climate change, and specifically, what role does corporate America play in helping solve one of the most pressing societal issues of our time? In this survey, JUST Capital, with our research partners at The Harris Poll, set out to understand Americans’ views on the environment, specifically their perceptions of corporations’ impact on the environment, and the operational changes and science-based commitments companies can make to help address this issue.

Most Americans accept that climate change is a reality.

A critical mass (71%) of respondents to this survey say that they’re concerned about climate change. And although majorities are concerned across demographic breaks, the degree of concern is higher for some key groups, such as younger respondents (77% of those 18-34), parents with young children (76% of those with children under 18 in their household), and those who live in the northeast or west (78% and 77%, respectively): 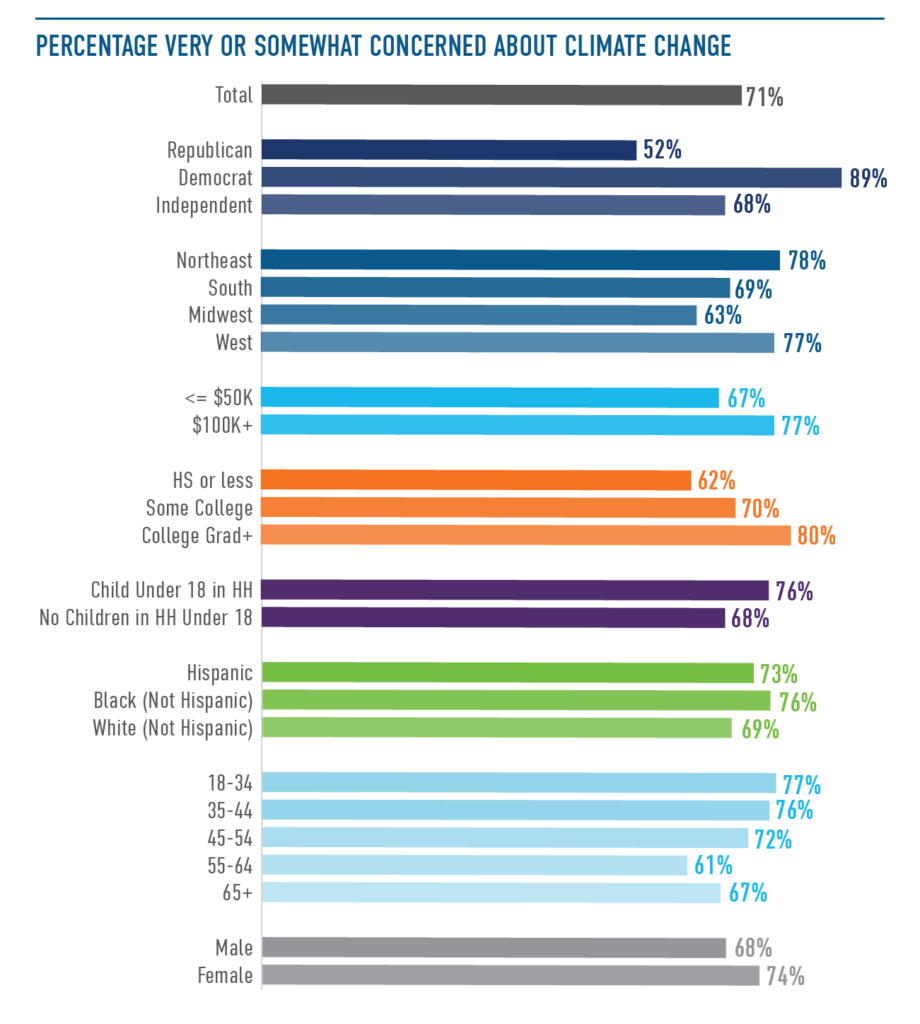 Two-thirds of respondents agree that fossil fuel usage – the burning of coal, oil, and natural gas for energy – is the largest contributor to climate change. Yet, when we ask respondents what entity contributes most to climate change, slightly more than half (52%) say the operations of large companies, while a nearly equal percentage (48%) believe the everyday actions of consumers contribute more, signaling that knowledge of the issue is relatively shallow. Research indicates that only 100 fossil fuel companies are responsible for over 70% of the world’s historic emissions, and that individuals contribute only a fraction of that. That a substantial portion of the American public still believes that individual actions have equal impact as large corporations shows that communication tactics by some of the world’s biggest polluters have been effective in influencing public opinion about the drivers of climate change. 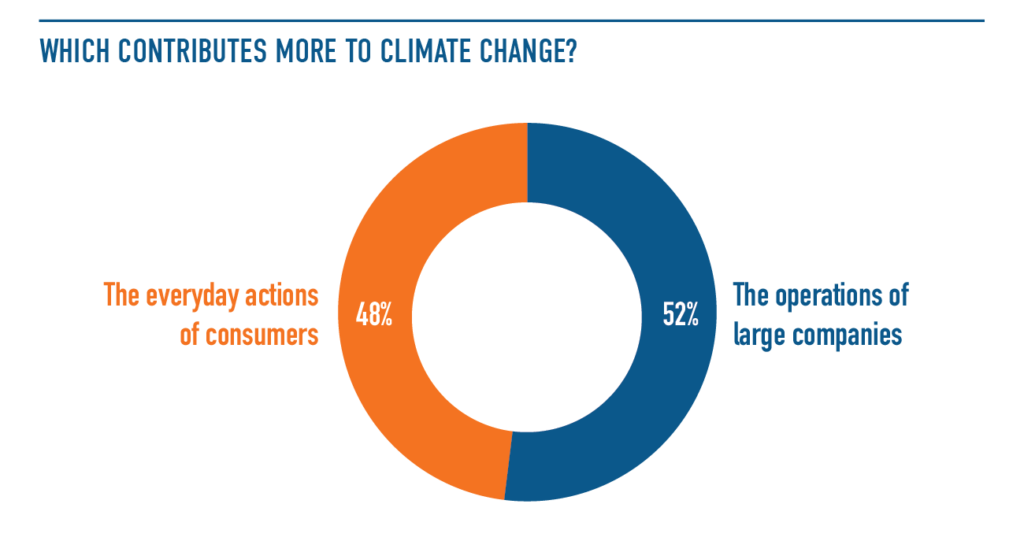 Companies can make a positive impact on the environment in myriad ways. 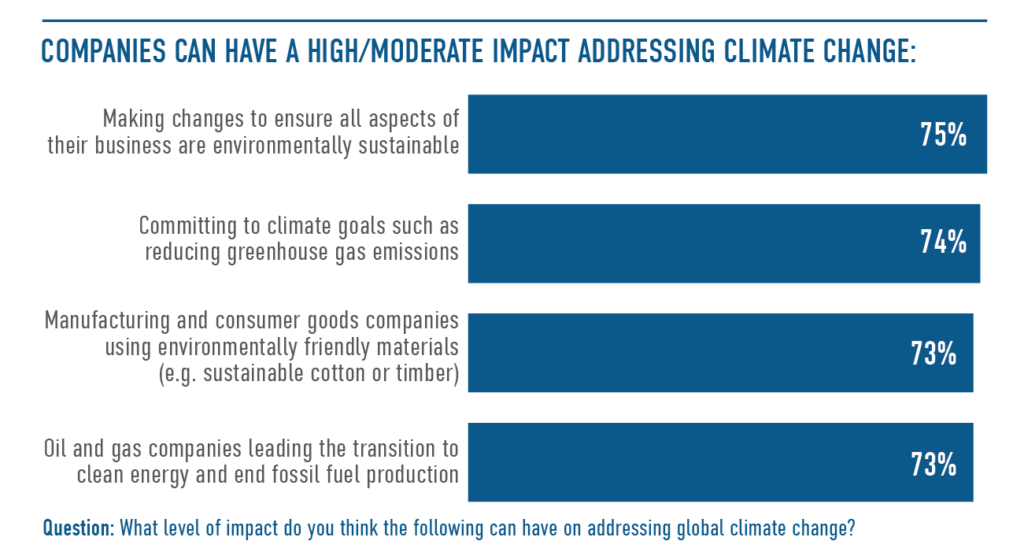 Even though research shows that reducing greenhouse gases is the most impactful way of mitigating climate change, carbon offsets are another strategy for reducing companies’ impact on the environment. When prompted with a definition – that carbon offsets cancel out the impact of a company’s greenhouse gas emissions by investing in projects, such as forest preservation or alternative energy, that remove or reduce an equivalent amount of greenhouse gases – a majority of respondents said that companies should either fully migrate to reducing greenhouse gas emissions or take a hybrid approach that pairs reducing emissions with carbon offsets, vs. just 8% who say offsets are the way to go. Still, one in five said they were unsure, signaling that the public does not have a deep understanding about the issue. 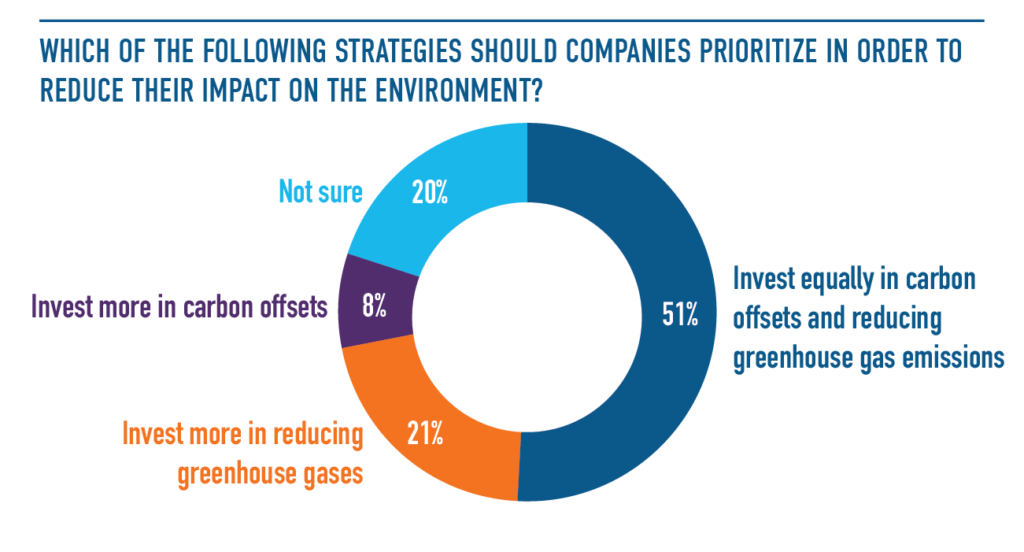 Companies generally show a commitment to becoming greener…but many still need a push.

When asked whether companies are truly committed to becoming more environmentally sustainable, a majority of respondents (62%) agrees, vs. 38% who disagree. A plurality (46%) falls into the “somewhat agree” camp, signaling an ongoing skepticism that companies are walking the talk. This is similar to concerns Americans have about greenwashing, the deceptive practice of branding a company as environmentally friendly without adopting legitimate sustainable operations – something institutional investors are concerned with as well.

Most agree that outside influence can drive change in corporate behavior. 46% of respondents say market forces – such as pressure from consumers, employees, and investors – can incentivize companies to reduce their impact on the environment. We also asked respondents about the ways in which they, as consumers, have supported companies that have become more environmentally sustainable (such as by reducing excess packaging or using alternative energy), and more than half (58%) say they have taken some action in the past 12 months, including: 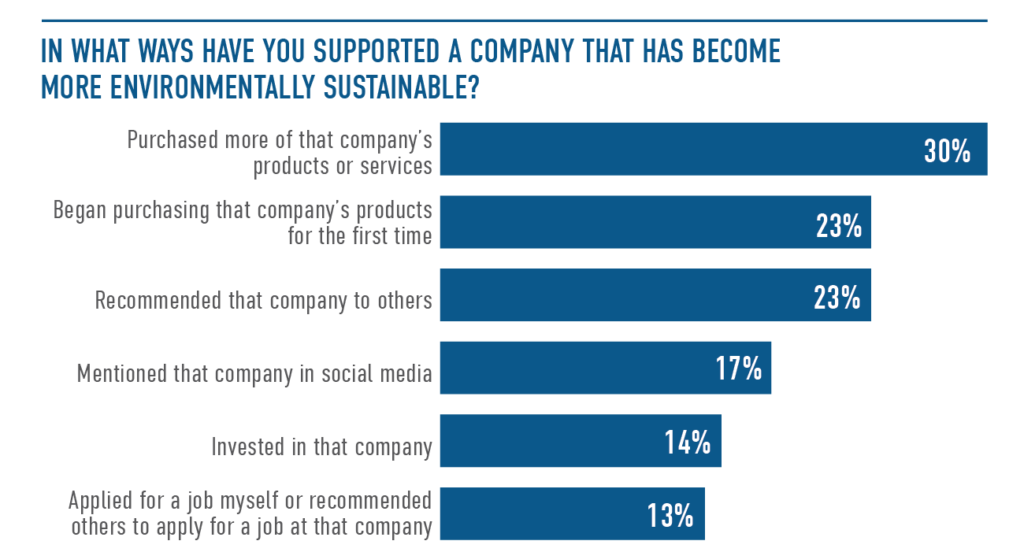 Yet, regardless of the myriad ways in which individuals can “vote with their wallets,” a majority (54%) says that it’s government regulations, incentives, and programs that play the larger role in affecting change. 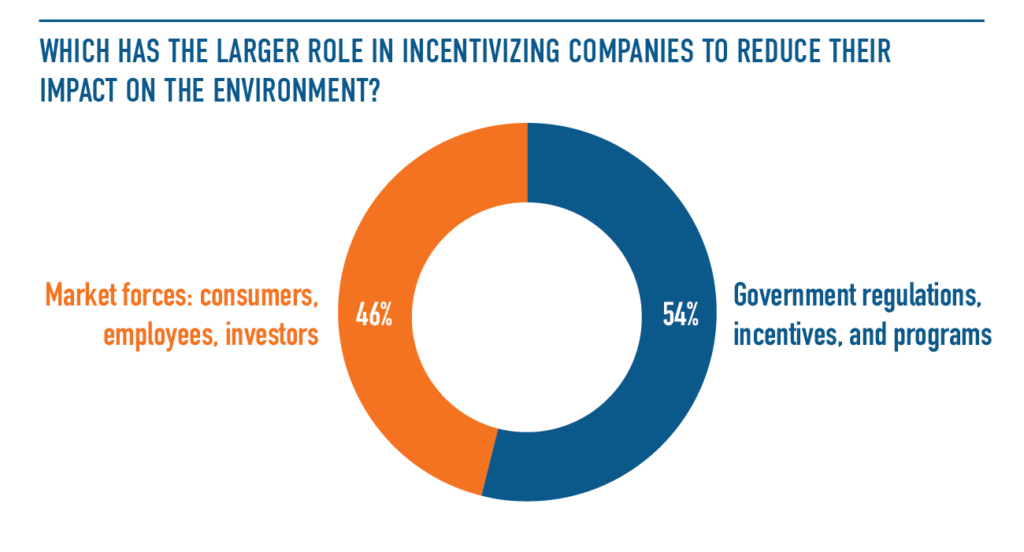 And three in four respondents support governmental requirements for publicly reporting climate impact statistics, roughly the same percentages that support other corporate reporting, on issues such as tax expenses and workforce compensation. 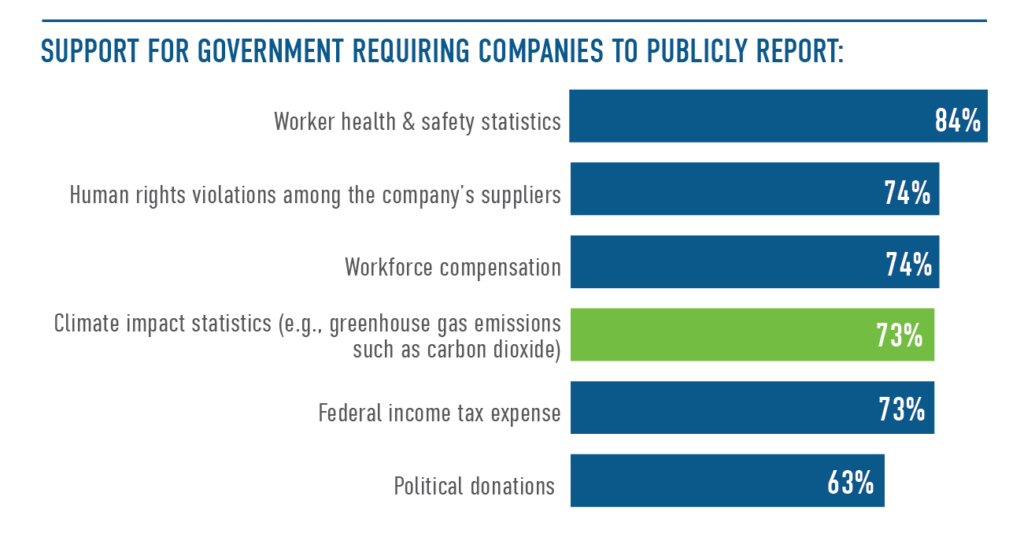 With environmental issues rapidly growing in importance, Americans are looking to companies in the private sector to make changes to their operations in order to make significant headway against the advancements of climate change. During Climate Week, we also explore the state of disclosure on climate commitments made by the companies we rank – and find that greater transparency is still needed from corporate America to truly mitigate their impacts and limit the progression of global warming. Climate change will continue to be a critical issue in our nation and in our world, and with the public in clear alignment that companies need to play their part, we will be tracking whether the largest U.S. companies are taking steps to ensure a better future for all.

This survey was conducted online within the United States by The Harris Poll in partnership with JUST Capital from September 7–9, 2021 among 2,062 U.S. adults ages 18 and older. The survey is not based on a probability sample, is not representative, and therefore no estimates of theoretical sampling error can be calculated. For complete survey methodology, including weighting variables and subgroup sample sizes, please contact Jennifer Tonti, Managing Director, Surveys & Polling at jtonti@justcapital.com.