2020 has been a year like no other. Every aspect of society has been roiled by the global pandemic, the economic fallout, and the national reckoning with racial injustice. The country has been shaken to its core. As we rebuild toward a more just and equitable future, it has never been more urgent or more important for corporate America to listen and respond to what the American public prioritizes.

This year’s survey results arrive amidst this unprecedented time, presenting both a challenge and an opportunity for corporate America. In 2020, 92% of Americans agree that it’s important for large companies to promote an economy that serves all Americans, but only 50% believe that companies are actually doing that.

This builds on our finding from our recent survey with the Harris Poll – showing that 89% of Americans believe this moment represents an opportunity for large companies to hit “reset” and focus on doing right by their workers, customers, communities, and the environment.

During the ongoing pandemic, Americans agree companies are prioritizing their workers more than ever before. When asked if they think the top priority for companies in this country right now is their shareholders, their employees, or their customers, 37% of Americans believe that employees are the top priority, a 17 percentage point increase over last year (46% of Americans believe shareholders continue to be companies’ top priority, but that perception dropped 23 percentage points from 69% in 2017). 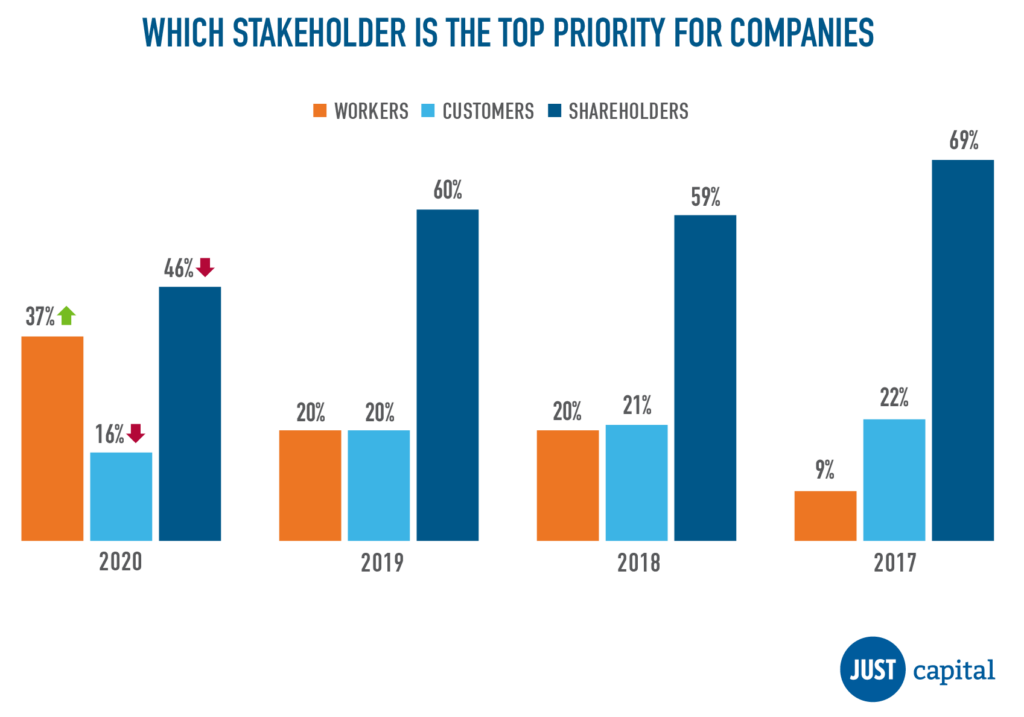 Despite that shift, the perception remains that companies’ lowest-paid workers are being left behind. 80% of Americans agree that large, public companies have a responsibility to consider their impact on all their stakeholders. But Americans are twice as likely to believe that companies are having a positive impact on their shareholders (70%) than on the financial well-being of their lowest-paid workers (35%).

The Roadmap for Stakeholder Capitalism

Since 2015, JUST Capital has surveyed more than 110,000 Americans across demographics on what they believe U.S. companies should prioritize most when it comes to just business behavior. In collaboration with NORC at the University of Chicago and The Harris Poll, JUST Capital’s 2020 survey asked a representative sample of more than 4,500 Americans to compare 19 different business issues head-to-head, to provide a compelling roadmap for where companies should focus their efforts to create a more just and inclusive economy. Additional surveys conducted in partnership with The Harris Poll throughout 2020 engaged approximately 17,000 U.S. adults ages 18 and older.

“Pays workers a fair, livable wage” was the single most important stakeholder issue in this year’s survey, and all five Worker issues – regarding pay, training, health, equity, and benefits – are among the top seven priorities of the public.

Organizing the 19 Issues into stakeholder groups, the survey research provides a roadmap for how Americans want companies to prioritize stakeholders, including how a company: 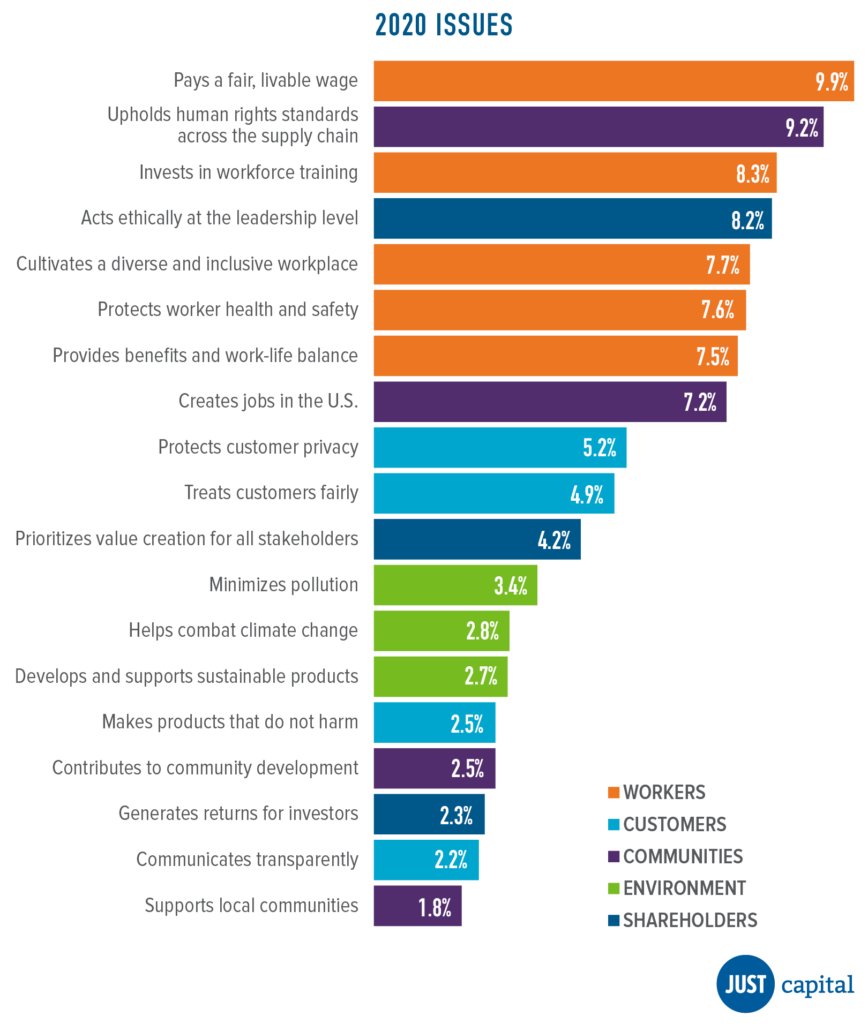 Explore the full results here to better understand the American public’s current views on business, as well as a clear and compelling roadmap for where companies should focus their efforts as they navigate the crises of today. 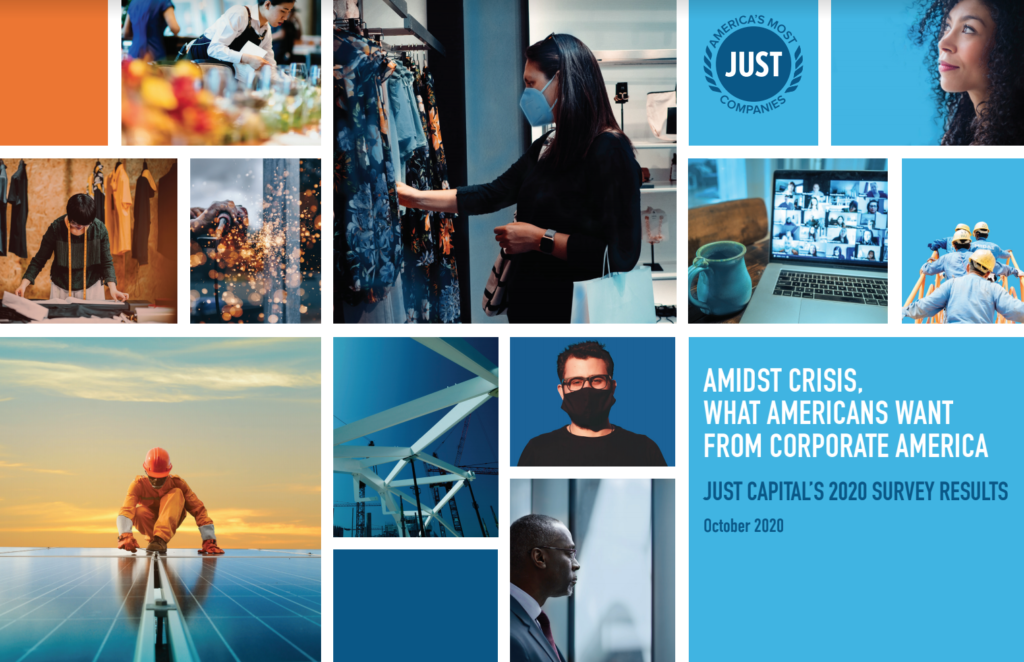 And stay tuned: On October 14, JUST Capital will unveil which corporations are leading the way in delivering on the priorities of the people, as this survey data underpins how we scored corporate stakeholder performance this year in our annual release of America’s Most JUST Companies. The Rankings, including the Forbes JUST 100 and Industry Leader lists recognize companies doing right by all their stakeholders – workers, customers, communities, the environment, and shareholders – as defined by the American public.