$251M
in assets on the JUST ETF's first day of trading

"How are we going to get social change? There is a $19 trillion private economy, it's 4x the size of public sector, 40x the size of the philanthropic sector. If we are going to have true social change, it's going to come through the private sector. That’s where JUST Capital comes in."

At JUST Capital, everything starts with the voice of the American public. Each year, we survey Americans to identify the issues that are most important in defining just business behavior today. The results represent a unique, timely, and powerful picture of how Main Street sees Corporate America, and what matters most to them. 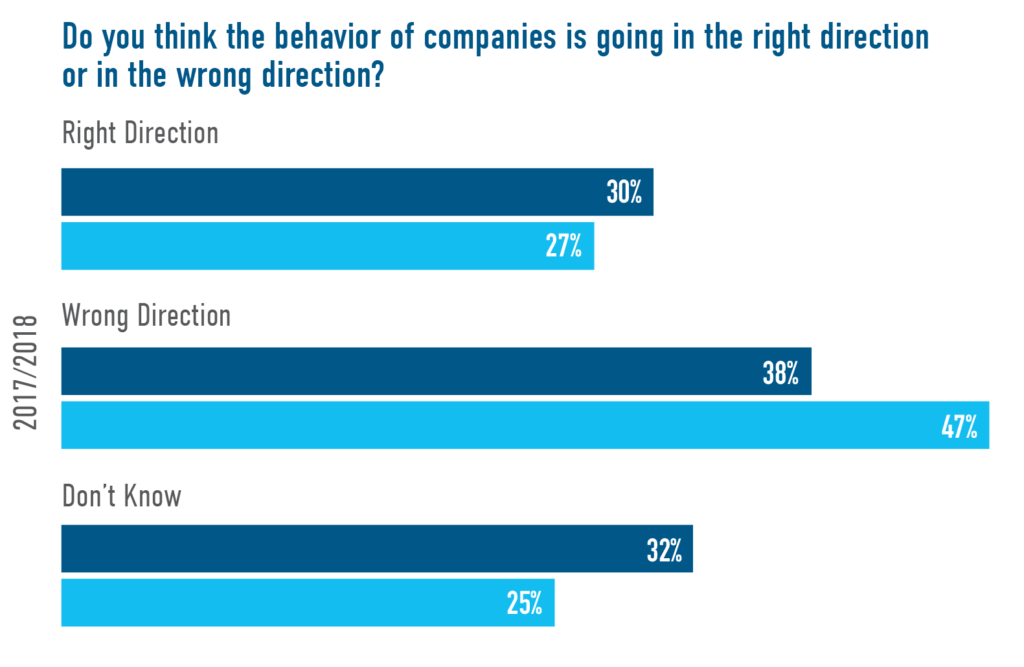 More and more, CEOs are taking a stand on issues like gender pay, discrimination, immigration, climate change, gun control, and more. We asked the public what they think about CEOs acting on important social issues.

To gauge their sense of empowerment in the market, we asked Americans how effective they think people can be when they act together to try to change companies’ behavior:

We asked Americans what actions they’ve taken to show their support for a company’s positive behavior. 78% said they had taken at least one of these actions previously, with 59% saying they had done so in the last 12 months. Of that 59%:

Working at a JUST Company

If given a choice, the majority of working Americans say they would opt to work for a more just company – even if it meant earning less pay (and in some cases, 20% less pay). Even though a question like this is susceptible to social desirability bias, it’s a remarkable finding.

We also heard from an overwhelming majority that companies aren’t doing enough today, especially when it comes to workers. In particular, the results clearly signaled that Americans felt companies were prioritizing shareholder interests above all.

This year, we also asked Americans: "If you could send one message to the CEOs of America's largest companies on any topic, what would your message be?" We had over 3,000 responses to this question and in over one third, Americans indicated workers should be put first.

The priorities of the public stemming from these surveys underpin everything we do. They power our Rankings and drive our tools and products - including the JUST ETF. In 2018, we surveyed more than 9,000 Americans from all around the country. The results uncover significant unity in how people want companies to behave and what a more just economy could look like. And taken together, the results provide a Roadmap for Corporate America to help benchmark their corporate practices, and better align with the priorities of the American public.

Americans Are Softening Their Negative Impression of Business

Good News for Those Who Believe More Unites the U.S. Than Divides It

Is the Trust Crisis Receding?

Central to the fulfillment our mission is our annual Rankings of America’s Most JUST Companies. This year, once again in partnership with Forbes, we released our third annual Rankings. Topping the list in 2018 was Microsoft, a leader on many of the key themes of justness – including Workers, the Environment, Customers, and Leadership.

"It's not just about creating a surplus for yourself. You have to ask, ‘What's the state of the world around you?' Our broader vision is that happier employees, customers and partners have to do well for Microsoft’s business to flourish. A successful product is one that fosters more success around it and focuses on equitable growth."

There were some notable changes from 2017. Overall, 37 companies are new to the JUST 100, and several of the list’s leaders improved performance by strengthening workplace equity programs, including more pay equity analyses and increased board diversity. We are closely tracking year-over-year changes that companies are making, and believe the Rankings will continue to direct resources and capital toward companies leading the charge.

Why More Companies Are Doing Better By Being Good

On December 10, we celebrated America’s Most JUST Companies in New York, along with Forbes, JUST 100 leaders, and special guests from the business, investment, and impact communities.

One of the most powerful validators of JUST Capital’s theory of change is the reception we’ve received from the companies we rank. Year over year, we’ve seen a 190% increase in companies engaging with us to garner a deeper understanding of what matters most to the public and also ensure that we have accurate and up-to-date data to drive our Rankings. We also showcase top performing companies throughout the year to demonstrate that just business behavior can fuel prosperity, innovation, and impact for the short- and long-term. Here’s what companies are saying:

“Being a good corporate citizen is foundational to who we are as a company. We give back to communities where we live and work, start conversations that enable inclusion and equality and strive to do the right thing for the environment. We’re proud to do our part to make a positive difference in the world and be a force for good and a force for growth.”

– David Taylor, Chairman of the Board, President and CEO, P&G

“Adobe’s appearance in the top 10 of this year’s America’s Most JUST Companies List echoes our core belief that what is good for our employees, our customers and our communities is the right thing to do, and it is good for business.”

“At Humana, we’re fortunate to have so many employees who care so much about helping people live healthier lives. This commitment to people’s health is what motivates so much of our work at Humana, and I’m sure it’s the main reason people view our company as a trusted corporate citizen.”

“We’re humbled to be part of the Top 50 in JUST Capital’s ranking this year. We’re committed to continuing our ongoing efforts to raise the bar when it comes to how we operate our company, engage our employees, serve our clients, and make a positive impact on the communities where we live and work. It’s only with this spirit of continuous improvement that we can push for progress and create value for all our stakeholders.”

"It is an honor to be named one of America’s Most JUST Companies, as it acknowledges how our Mission has been brought to life by the efforts of our employees around the world."

“It is an honor to be included in this year’s list of America’s Most JUST Companies, and recognized as the leader in the chemical industry. From creating high quality jobs and supporting the communities in which we operate to delivering long-term financial growth, we are grateful for this acknowledgement of our work to meet the needs of all of our stakeholders.”

“We are honored to be recognized by Forbes and JUST Capital for what all of our colleagues do every day to make a difference. This reflects Xylem’s commitment to creating economic and social value through our mission to solve water – by making water safer, affordable and more accessible for people around the world.”

Being just isn’t only about putting the humanity back into business performance. It’s about driving better returns, and our JUST Alpha research demonstrates this with powerful effect – examining how and why just companies outperform their peers while driving positive change on the issues the American public cares about most. Exhibit one: the JUST ETF launched in June in collaboration with Goldman Sachs, based on our research and Rankings.

The Win-Win of Just Business Behavior

Since its inception, the Index has outperformed the Russell 1000 as well as most of its ESG index peers. In addition, compared with Russell 1000 companies not included in the Index, constituents on average paid 26% more, created 20% more jobs, paid 94% fewer EEOC fines, gave twice as much to charity, emitted 45% less GHG emissions, and had 7% higher ROE. The ETF ended first day of trading with $251M in assets, making it the single most successful ESG ETF launch ever, and in the top 10 equity ETF launches in history. Stay tuned for new releases in 2019 as part of our ongoing mission to drive capital toward more just companies and incentivize a more equitable marketplace.

A Better Approach to ESG?

One of the most compelling features of the JUST platform is our ability to create customized, issue-specific company rankings. When the Tax Cut & Jobs Act was passed, we introduced the Rankings on Corporate Tax Reform to shed a light on how corporations were investing their tax windfall. Called “one of the most detailed accountings to date” by The New York Times, our ongoing analysis tracks how corporations are allocating their TCJA dollars, and the extent to which that matches the public’s views. While Americans agreed that 24% of tax savings should be given back to workers in pay and benefits, the companies we tracked in 2018 have, on average, allocated an estimated 6% to workers and upwards of 56% to shareholders:

Spreadsheets at Dawn: The New Tax Battle Is All About Data

15 major companies that are investing their tax savings in employees, jobs, and communities

Where Companies Are Spending Their Tax Savings

Another important thematic initiative was the launch of the JUST Capital Environmental Explorer – a new, interactive tool that helps people quickly and easily understand the environmental impacts of different companies. Through the Explorer, we show what corporate leadership looks like, and who the leaders are, on the environmental performance factors deemed most important to the American public.

2018 was also a great year in terms of strengthening our partnerships and organizational capabilities. To our Board, we welcomed Kip Tindell, founder, former CEO, and Chair of The Container Store. We also established our inaugural CEO Advisory Council with nine former CEOs from companies including Campbell’s Soup and P&G to help inform our corporate strategy. We co-hosted convenings sponsored by the Ford Foundation, with the Aspen Institute and Harvard Law School’s Labor and Worklife Program on incentivizing good jobs and supporting meaningful employee engagement strategies. We partnered with the Illinois Treasurer’s Office on calling for more disclosure around corporate tax plans and released a report on our findings. We supported Panorama’s efforts to ask companies to disclose their paid family leave policies and data. And we supported efforts underway led by Living Cities, Robert Wood Johnson Foundation/GRI, and the Ford Foundation respectively on racial equity in the C-Suite, creating a business culture of health, and research relating to the future of work.

If 2018 was a breakthrough year for JUST Capital, then 2019 will be one of acceleration. This begins and ends with the mission, and encompasses: