Building a More Just Marketplace: The 2018 Rankings of America’s Most JUST Companies

America needs an economy that gives more people a stake in its success. In 2017, 82 percent of all wealth generated went to the richest 1 percent of the global population. Worker productivity in the U.S. grew by 74 percent between 1973 and 2013, yet compensation grew by just 9 percent during the same period. According to a Harvard University study, 51 percent of young people aged 18-29 claimed they don’t even support capitalism.

How do we restore faith in business and capitalism as a force for greater good?

In our view, the best way is to build a marketplace where more just business behavior – as defined by the American people – is the norm. Today, we’re thrilled to share, in partnership with Forbes, our 2018 list of America’s Most JUST Companies – JUST Capital’s third annual ranking of the 1,000 largest publicly traded U.S. corporations on the issues Americans care about most. Issues such as good jobs, fair pay and strong benefits, employee education, support for local communities, customer privacy, environmental impact, and more.

Each year, JUST Capital conducts some of the most comprehensive surveys ever conducted on public attitudes toward corporate behavior, which form the basis for our Rankings – including the JUST 100 list of the top companies across all industries in rank order, as well as the Industry Leaders list, featuring the 33 top performers by sector.

Topping the list this year is Microsoft, which performs exceptionally well on many of the issues defined by the American public – including Workers, the Environment, Customers, and Leadership & Shareholders. 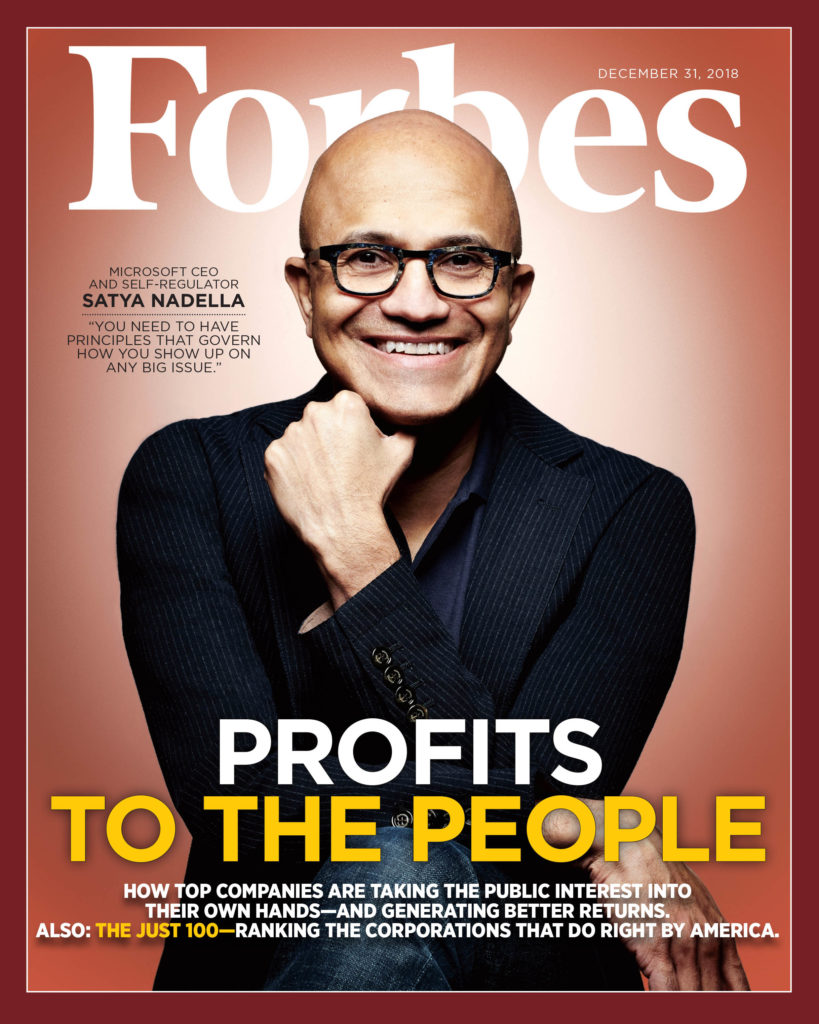 This year’s list of America’s Most JUST Companies is covered extensively by our partner, Forbes, including an exclusive interview with Satya Nadella, CEO of this year’s #1 company, Microsoft. The cover story in this month’s Forbes Magazine digs into some of the companies that top the list – like Microsoft, Adobe, and Procter & Gamble – and how they measure up to the priorities of the American public. The issue also features profiles on JUST 100 companies VMWare and Hilton, as well as in-depth analysis of what’s new in this year’s Rankings. Explore the full coverage here.

Through these Rankings, we hope to help build a more just economy where serving the broader interests of all stakeholders – including workers, customers, and communities – can be a mechanism that drives financial success. There is nothing more American than the freedom to choose, and our 2018 Rankings both start and end with the public. Based on the priorities of Americans themselves, our Rankings can help people make more informed decisions about where to invest, work, and buy, to direct capital toward companies advancing a more just future, and an economy that works for all Americans.