72% of Companies that Cut Executive Pay Have Still Laid off or Furloughed Workers: Why CEO Pay Cuts Aren’t Cutting It

Over the course of the coronavirus crisis, we’ve seen dozens of CEOs and executive leaders take temporary pay cuts in an effort to curb costs, and as a show of good faith to employees and other stakeholders weathering the impacts of the pandemic – though some pay cuts are already being rolled back. And while cutting CEO pay has been criticized by many as a symbolic act, our recent Survey – which looks at what Americans want from corporate America throughout the COVID-19 crisis – found that 70% of respondents believe that CEO pay cuts can be a significant means of cutting costs and could help prevent layoffs.

Executive pay has faced considerable blowback in recent years, with rising inequality shining a light on the stark discrepancies in pay between CEOs and their workers (since 1978, CEO compensation grew 940% while typical worker wages rose just 12% in that same timeframe). It’s a natural target for cost cutting during the crisis, but it’s also complicated by the fact that CEO compensation packages are largely comprised of stock awards. And while leaders may be taking a hit to their salaries, they only account for 8% to 10% of their total pay. Equity awards, which fluctuate with the market and make up the majority of CEO compensation, have been mostly untouched during the crisis, but some are on the rise.

As part of our COVID-19 Corporate Response Tracker – which analyses the actions taken by America’s 300 largest employers in response to COVID-19 – we found that 28% of companies had announced a pay cut for leadership over the last several months, including CEOs, other C-suite executives, or board members. 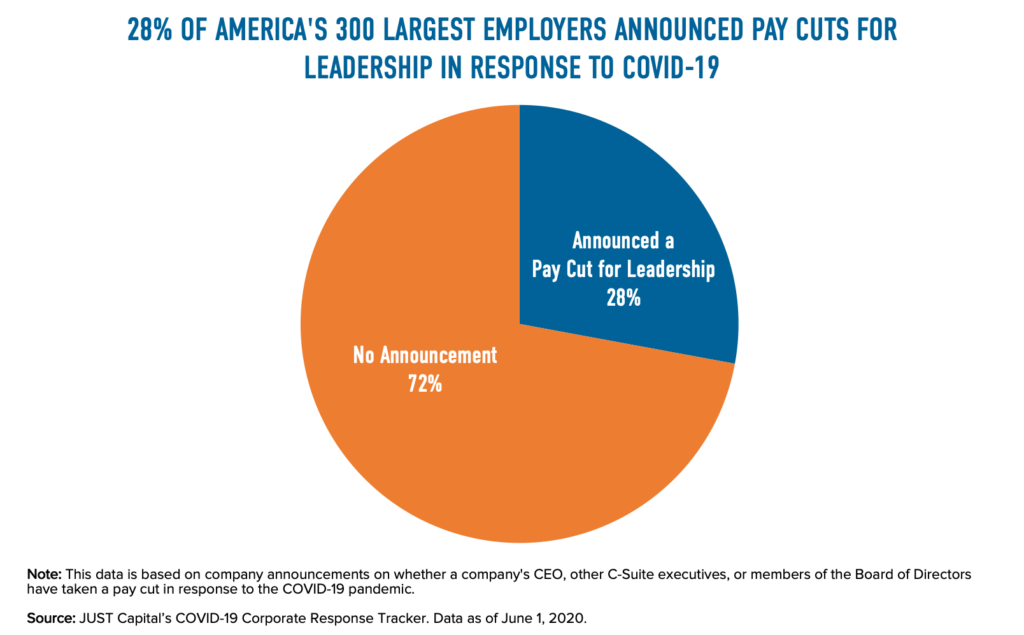 This is down from one-third of companies in the 100 largest employers, which we unpacked in our initial look at this issue last month – suggesting that perhaps these pay cuts are less common for companies that are smaller in size or have less of a customer-facing brand presence.

Delve into our Corporate Response Tracker for details around companies that have announced executive pay cuts – for CEOs, C-suite executives, and board members – during the crisis:

Of the companies that have announced executive pay cuts, 72% have also announced furloughs and layoffs. That’s nearly three-quarters of those whose C-suite and board leadership have relinquished a portion of their pay for their companies – suggesting that, unfortunately, pay cuts as they are currently constructed have not staved off layoffs or furloughs across the board.

And for some companies – including airlines like United and Southwest that have been especially hard hit by the crisis – layoffs have not been announced, but are likely to come once the terms of the federal bailout that prohibit job cuts expire. Unfortunately, this means we may see the overlap grow between companies cutting executive pay and letting workers go.

Delve into the Tracker to explore which companies have announced layoffs for their workers:

This is an extremely tricky time for corporate leaders looking to protect their employees while keeping their companies afloat. And of course there are some employers – those in retail, hospitality, and transportation especially – for whom layoffs are inevitable, if they haven’t already occurred. But with executive compensation cuts, as they’re structured today, unable to prevent job reductions at most companies, corporate leaders are likely to continue to face criticism for the preservation (and increase) of equity awards, even if they do forgo their base salaries.

In the coming months, we will continue to track both executive compensation cuts and layoffs/furloughs at America’s largest companies. As states and businesses continue to reopen, we are likely to see more executive pay be restored to pre-COVID levels, while many Americans go back to work and others remain unemployed. In the aftermath of the crisis, this might be the time for boards, investors, and other corporate leaders to reflect on the opaque and, at times, problematic pay structures that have long-existed for CEOs and other executives, and to reset expectations. We’ll be watching to see how corporate leaders respond, and what actions they take – from personal sacrifices to large-scale organizational action – to support their stakeholders throughout, and beyond, the crisis.