SURVEY ANALYSIS: Two Years Later, Do Americans Believe Companies Are Living Up to the Business Roundtable’s Redefined Purpose of a Corporation?

Since the Business Roundtable redefined the Purpose of a Corporation two years ago, we’ve been tracking how Americans think companies are measuring up to this new stakeholder-focused purpose. The macro perspective is that America’s largest companies are perceived to be doing well promoting an economy that serves all Americans; a sharp increase (16-20 percentage points) from when we first asked this question in August 2019.

Yet when asked specifically about corporations’ impact on individual stakeholders, the perception is that shareholders continue to win out over other stakeholder groups.

Americans continue to be optimistic about capitalism as an economic system, but there is near universal agreement that a more evolved form of capitalism is needed to:

Promoting an Economy that Serves All Americans

In August 2019, the Business Roundtable – comprising CEOs from some of the largest U.S. companies – vowed to move away from shareholder primacy in favor of stakeholder capitalism by redefining the purpose of a corporation to promote “an economy that serves all Americans.” The statement was originally signed by 181 CEOs, and as of August 2021 has increased to 243 who have committed to lead their companies for the benefit of all stakeholders.

For the statement’s two-year anniversary, JUST Capital and our polling partner, The Harris Poll, checked in with Americans on how well they think large U.S. companies have been upholding these principles.

Each time we’ve monitored public opinion about the Business Roundtable’s redefinition of corporate purpose (in August 2019, 2020, and 2021), roughly equal proportions (nine in 10 respondents) say it is important for large companies to:

We shared the Business Roundtable’s announcement with survey respondents – that after more than 40 years of endorsing a governance model of shareholder primacy, the group committed to delivering value to all its stakeholders – and asked them whether they believed large U.S. companies had prioritized the needs of workers, customers, communities, shareholders, and the environment more, less, or the same over the last two years.

In most cases, pluralities of respondents say that large U.S. companies have prioritized their  stakeholders to the same degree that they did prior to August 2019, indicating that companies have not significantly shifted their focus away from shareholders to the benefit of other stakeholders, but neither have they focused on their stakeholders to a lesser extent. Of all the stakeholders, the highest percentages of respondents agree that shareholders and the environment have been prioritized more in the last two years (40% and 39% respectively), but by almost insignificant margins.

When we take a closer look at perceptions of how companies are impacting those same stakeholders, respondents believe companies have the greatest degree of positive impact on shareholders (68%) which is a significant margin over the environment (41%) and a company’s lowest-paid workers (46%). More respondents, however, say companies have a positive impact on each stakeholder than say they have a negative or no impact.

The responses are close to what they were one year ago, showing that the American public’s perceptions have not significantly shifted when it comes to how they think companies are impacting different stakeholders.

Finally, we asked respondents about their views on capitalism – particularly, whether capitalism in its current form is working for most Americans. The upshot: respondents continue to be optimistic on capitalism as an economic system, but pluralities say (with agreement across most demographics) that we need a more evolved form of capitalism to: 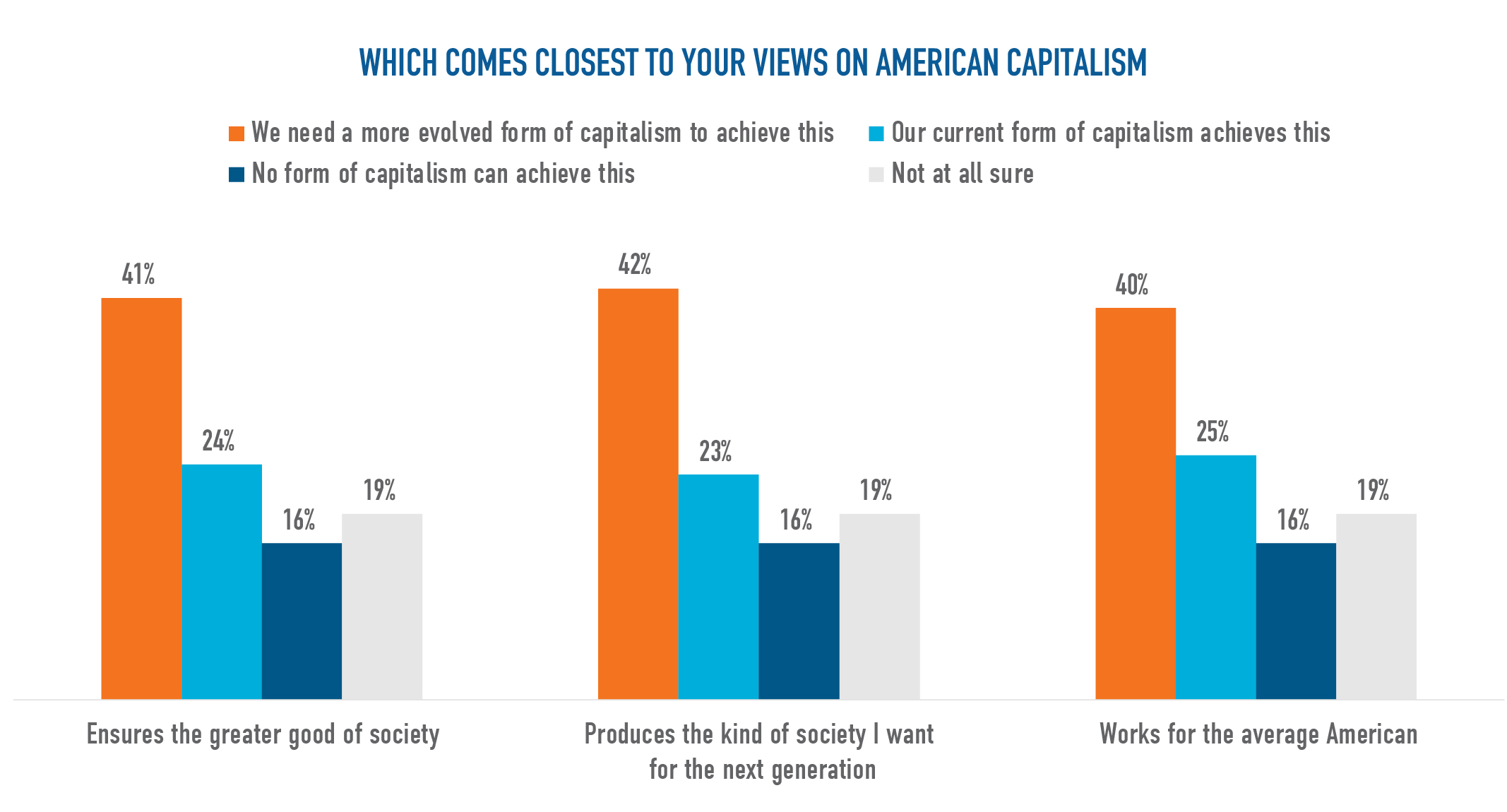 In the two years since the Business Roundtable redefined the purpose of a corporation, America’s largest companies have been asked to show up for their stakeholders like never before. Based on our findings from this latest poll, we see that the American public generally perceives the actions of corporate America as being positive – but when it comes down to brass tacks, there is much more to be done to support specific stakeholders, principally the environment and our nation’s lowest paid workers. As we move forward through these uncertain times, we will be continuing to track Americans’ views on business to better understand how and whether companies are truly measuring up to their new corporate purpose – to create an economy that works for all.

This survey was conducted online within the United States by The Harris Poll in partnership with JUST Capital between July 29th and August 2nd, 2021 among 2,099 U.S. adults ages 18 and older. Previous surveys were conducted with The Harris Poll July 20–22, 2020 among 2,003 U.S. adults and YouGov on behalf of JUST Capital in September 2019 among 2,000 U.S. adults ages 18 and older. These surveys are not based on a probability sample, are not representative, and therefore no estimate of theoretical sampling error can be calculated. For complete survey methodology, including weighting variables and subgroup sample sizes, please contact Jennifer Tonti (jtonti [at] justcapital.com).