In collaboration with our survey research partner, The Harris Poll, we have been polling the American public on a regular basis to identify what matters most regarding companies’ initial response to the COVID-19 pandemic, evolving priorities during the reopening and reset, and how to advance racial equity in the workplace in response to our national reckoning with racial injustice.

Timed with the one-year anniversary of the Business Roundtable’s landmark redefinition of corporate purpose, we asked the public how they believe companies are doing in shifting from a myopic focus on shareholders to better serving the needs of all stakeholders.

Here are the key insights, which we’ll further unpack below:

Are large companies promoting an economy that serves all Americans?

In August of 2019, the Business Roundtable – comprising CEOs from some of the largest U.S. companies – redefined the purpose of a corporation to promote “an economy that serves all Americans” and declared, “Americans deserve an economy that allows each person to succeed through hard work and creativity to lead a life of meaning and dignity.” The statement was originally signed by 181 CEOs, and 220 as of this August, who have committed to lead their companies for the benefit of all stakeholders.

The action ushered in a year of debate around whether the business community had truly shifted its priorities to abandon shareholder primacy in favor of shareholder capitalism. So 12 months after the announcement, JUST Capital, in collaboration with The Harris Poll, revisited one of our survey questions from last year to gauge the public’s thoughts about whether America’s biggest companies have indeed translated their commitments into action.

We reached out to 2,000 Americans and found that about 90% of respondents agree it is important for large corporations to build an economy that works for all Americans, and that 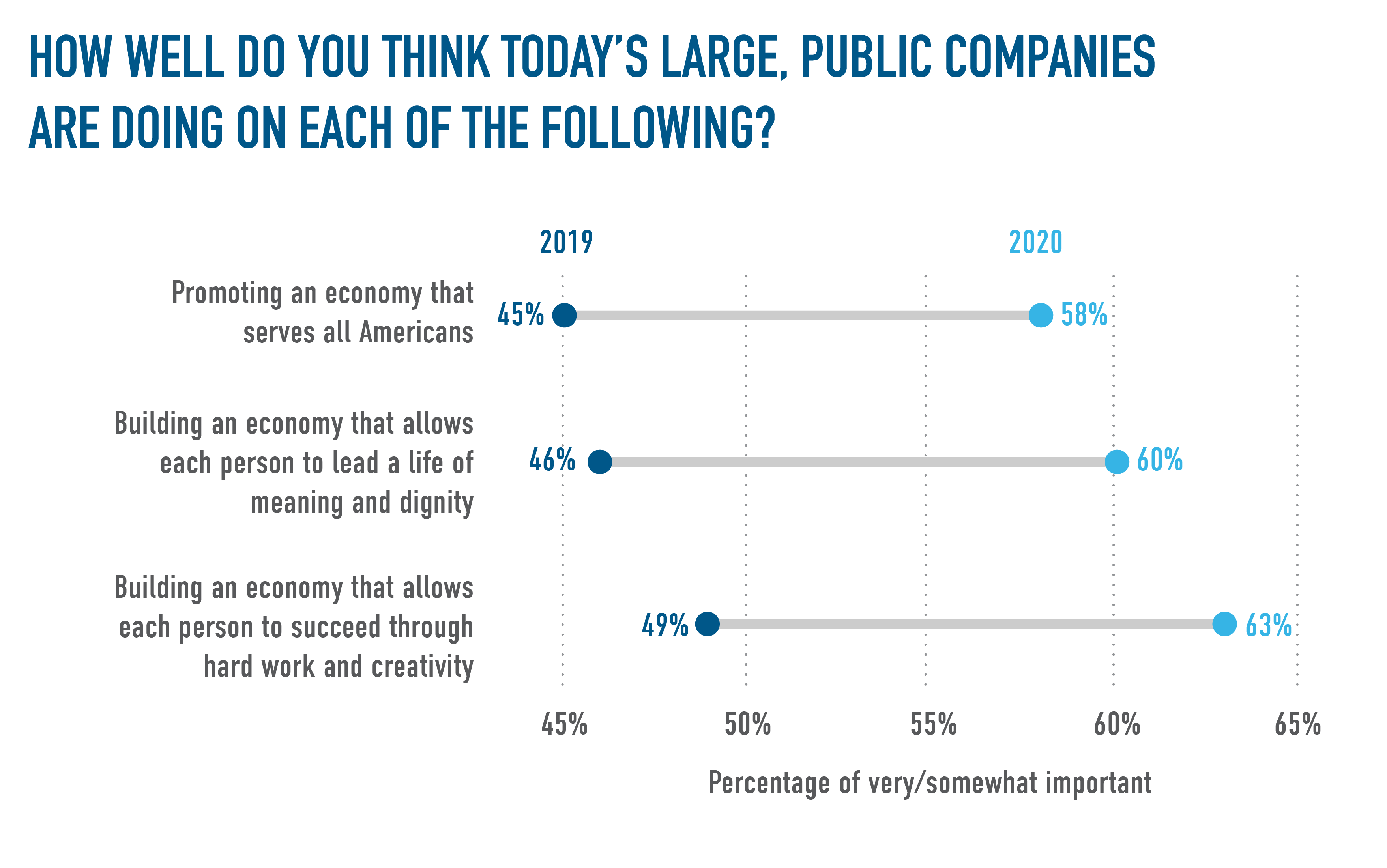 From our ongoing COVID-19 polling, we know that a majority of survey respondents (58%) believe America’s largest companies have been showing leadership throughout the COVID-19 pandemic. And our partners at The Harris Poll recently found that 72% of Americans “trust companies more than the Federal government to help find solutions to issues related to the COVID-19 pandemic and racial equality movement.”  These positive perceptions around corporate responses to the biggest issues of 2020 are most likely factoring into the positive perception increases this year. Still, Americans believe that large companies clearly still have some work to do, as only about one in five think corporations are doing very well in executing on these principles.

See our related analyses, also released today, that demonstrate how the signatories to the Business Roundtable’s purpose statement are responding to the pandemic as well as prioritizing racial equity in the workplace.

Is there a gap between corporate responsibility and impact?

In the year since the Roundtable declared a shift away from shareholder primacy, stakeholder capitalism has clearly taken root in the minds of most Americans, with about eight in 10 agreeing that large, public companies have a nearly equal responsibility to consider their impact on all their stakeholders. 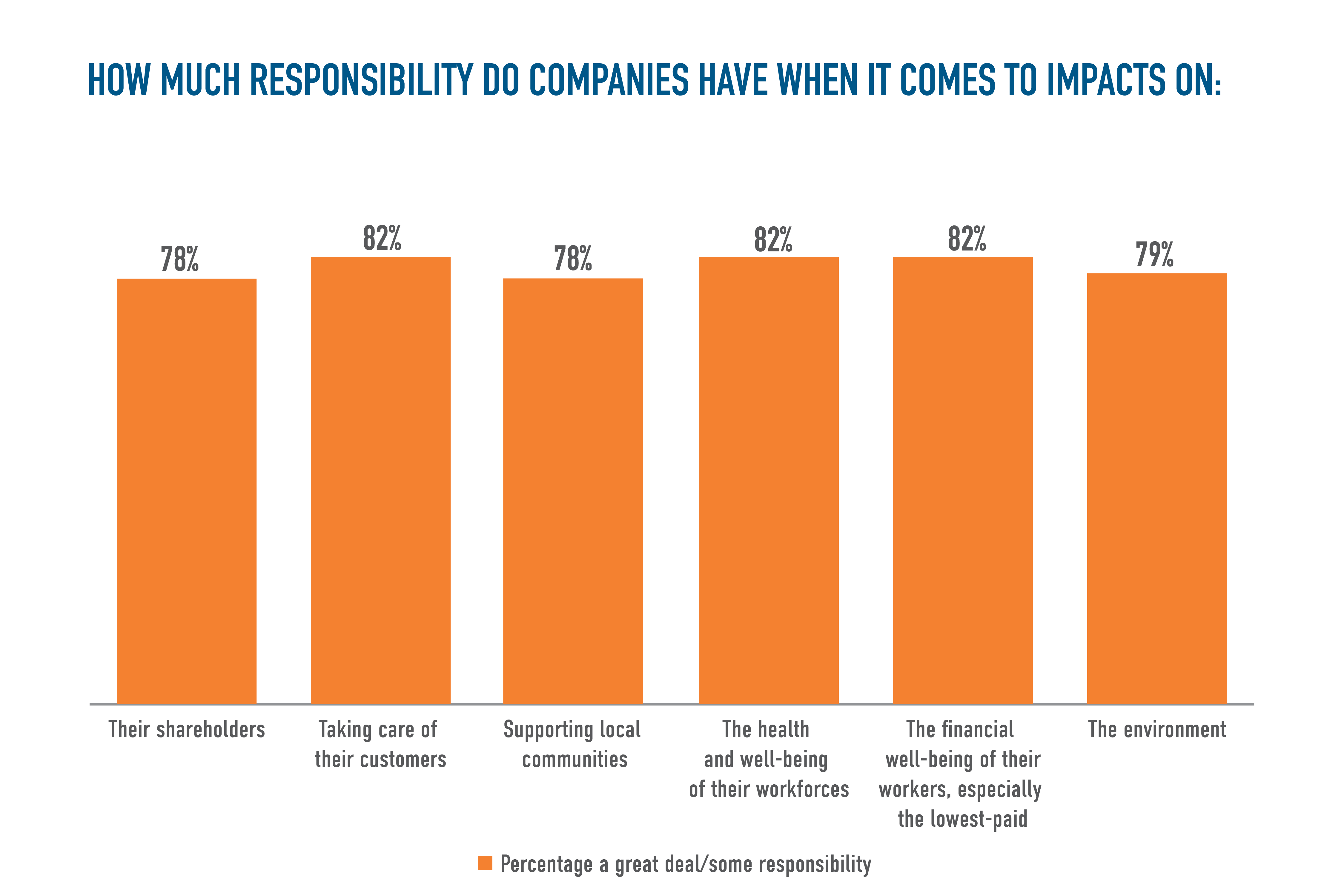 Yet when we look at the positive impact of companies on those same stakeholders, the perception is that shareholders reap the lion’s share, while other stakeholders lag behind, especially communities, workers, and the environment. 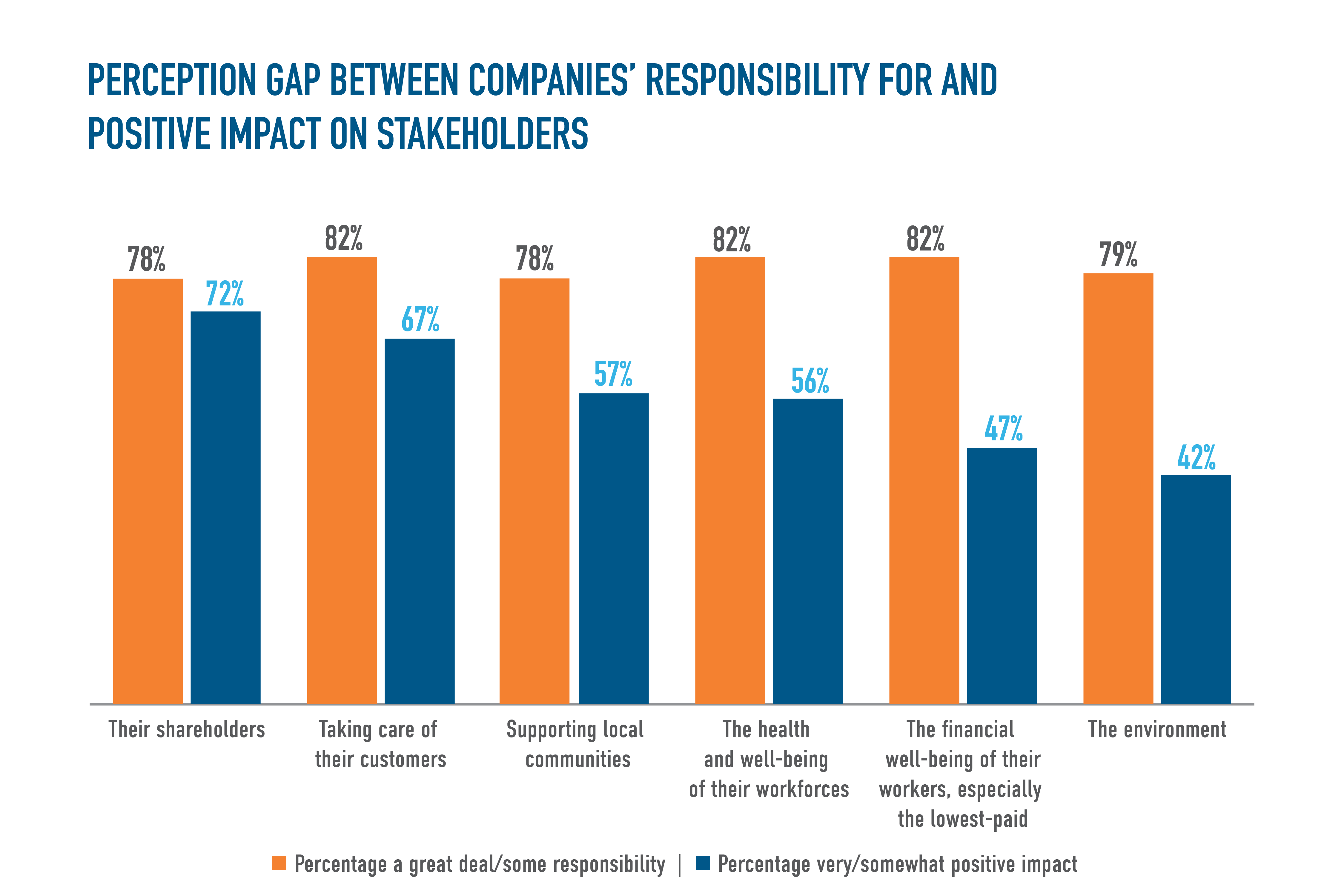 Regarding JUST’s most important stakeholder – workers – it is interesting to note that while 56% of Americans believe that companies are having a more positive impact on the health of their workforce, only 47% believe that companies are having a positive impact on the financial well-being of workers, especially the lowest-paid. 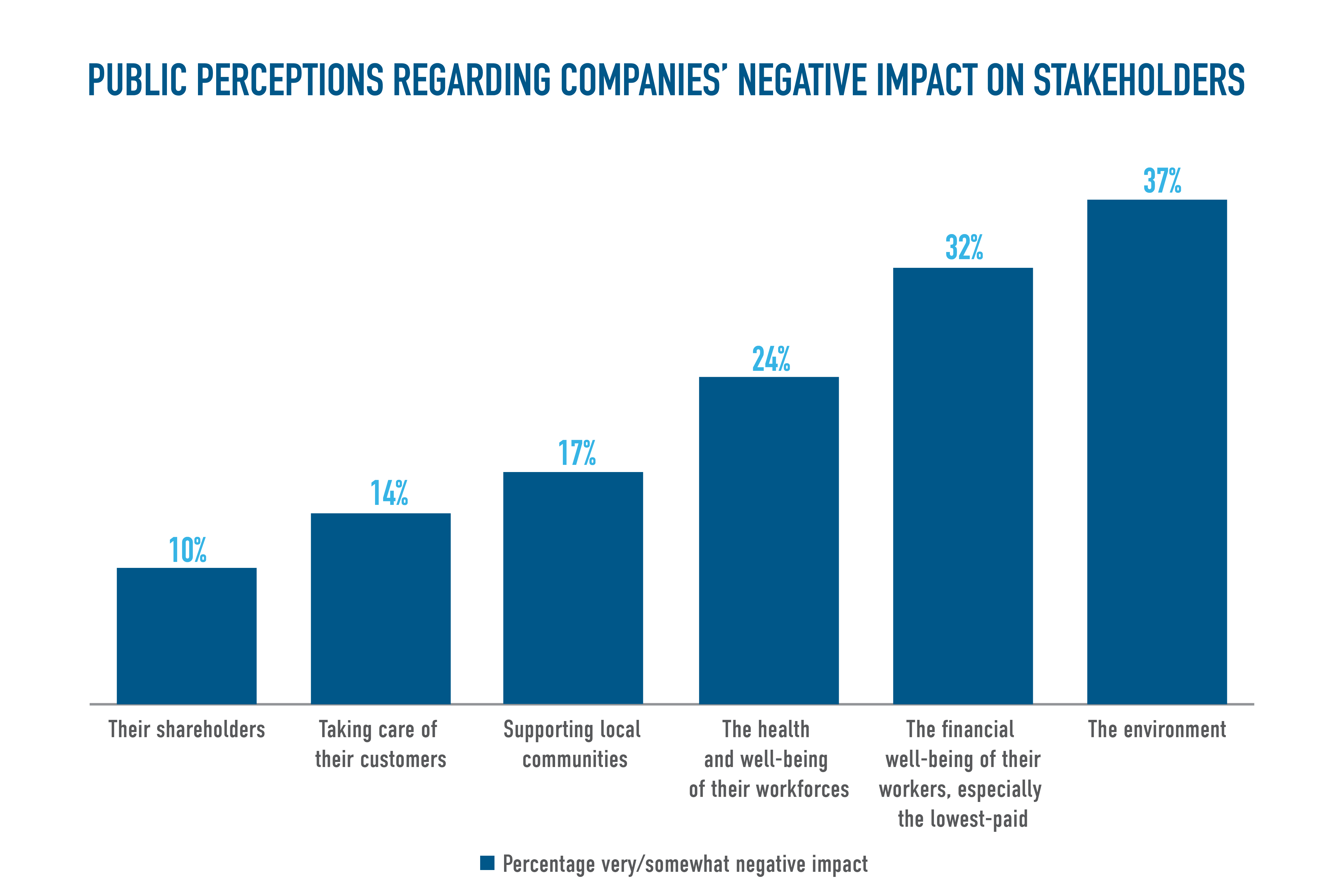 Stay tuned on this front as well, as JUST Capital and The Harris Poll will be tracking how companies are doing in closing this stakeholder support perception gap in the months ahead.

This survey was conducted online within the United States by The Harris Poll on behalf of JUST Capital between July 20-22, 2020 among 2,003 U.S. adults ages 18 and older. The data for 2019 was fielded via YouGov on behalf of JUST Capital in September 2019 among 2,000 U.S. adults ages 18 and older. Both online surveys are not based on a probability sample and therefore no estimate of theoretical sampling error can be calculated. For complete research methodology, including weighting variables and subgroup sample sizes, please contact Jennifer Tonti, Managing Director of Survey Research & Insights.

This report was written by Jennifer Tonti and Michelle Mullineaux.