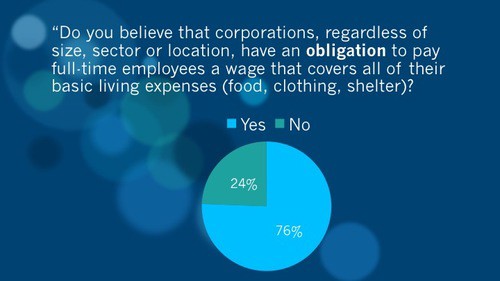 Two states just made a groundbreaking move to lift wages for their lowest-paid workers. Within hours of one another, California and New York became the first 2 states to pass legislation raising the state minimum wage to $15/hour, phased over the next 6 years. Combined, these two landmark actions will affect nearly 9 million people, many of whom are earning as little as $9/hour in the most expensive areas in the country.

Led largely by labor rights activists, the movement has slowly gained momentum since 2012. Now, in the midst of a heated political climate, and at a time when income disparity is the worst it’s been in decades, both democrats and republicans have taken public stands on the issue. In the political arena, the minimum wage debate often boils down to a battle between two simplified positions: pro-worker, or pro-business. But what does the broader American public think?

In 2015, JUST Capital began an unprecedented experiment to find out how companies measure up against America’s definition of just corporate behavior. Through surveys involving over 43,000 people, we learned what justness truly means for American citizens. And at very heart of it is the belief that a company’s justness starts with how it treats its workers. On the topic of pay:

The voice of the people rings clear – Americans see a living wage as a kind of human right and believe there is something intrinsically unjust in the fact that wages from full time jobs can still fail to cover basic living expenses. New York and California governors agree:“We want economic fairness, we want economic justice and we want it now,” said Cuomo at a Manhattan event. “People are angry, yes. Not only in this state but in this nation.”

The immediate effect of increasing wages is undeniable. Low-income workers would each end up with an estimated average increase in income of $4,900 a year. For families existing on the razor’s edge of the poverty line, the additional infusion could mean the difference between shelter and homelessness. However, in contrast to the stark business/worker divide manifested in politics, our survey also found that most Americans are pro-business: 62% of respondents agreed (somewhat or strongly) that what is good for business is good for the country. And from a business perspective, experts have voiced mixed opinions about whether a minimum wage hike to $15/hour is the best solution. California Governor Jerry Brown went so far as to suggest that, “economically, minimum wages may not make sense,” before supporting the legislation for its social impact.

So what lies behind the concerns that a minimum wage increase to $15/hour will have unwelcome consequences? Although first-mover cities like Seattle offer some early data on the effects of a phased wage increase, most forecasts in favor of or against these recent wage increases are based on theory rather than evidence. In the next blog post, we’ll explore some of these theories.

As the changes in Seattle, California, and New York take root, others lawmakers are watching. With more than a dozen local governments looking to pass similar legislation, who will be next to take the leap?