In recent years, we have seen an acceleration of both attention and investment dollars flowing toward the environmental, social, and governance (ESG) space. And while disclosure on these issues has increased significantly, many point to the challenges of comparing corporate performance without a standardized approach that allows investors, workers, researchers, and consumers to understand how things are being measured. In response, there have been a number of cross-sector efforts to drive greater disclosure and create consistent measures for progress.

Over the last year, the U.S. Securities and Exchange Commission (SEC) has signaled its interest in the topic, moving forward with potential rules on climate disclosure, board diversity, human capital management, and other topics. On Friday, SEC chair Gary Gensler confirmed on Twitter he was “working closely with our staff and fellow Commissioners to work out the details of a mandatory climate risk disclosure proposal,” and that “consistent and comparable” disclosures “would represent significant progress, requiring companies to assess climate risks and collect and publicly disclose relevant metrics for the first time, giving investors info they’ve needed for years.”

In December 2021, JUST Capital and its polling partner SSRS, in collaboration with Public Citizen and Ceres, embarked on a polling effort surveying a representative sample of 1,115 U.S. adults seeking to understand their views on the need for corporate disclosure and the creation of corporate reporting standards. For more detailed information about our research methods, please see the Methodology section at the end of this report.

Americans believe it is important that large U.S. companies be transparent about their societal and environmental impact, and support efforts from the federal government to require standard disclosures on human capital and climate impact metrics.

Over seven years of survey research – both polling and conducting qualitative discussions with the public – JUST Capital has found that Americans perceive that the business operations of large U.S. corporations have downstream consequences for their key stakeholders, including their workers, customers, communities, shareholders, and the environment.

The findings from this survey are consistent with previous polling; when asked about the actions and behaviors of America’s largest companies, more than 80% agree that corporate actions impact both society at large and themselves as individuals. 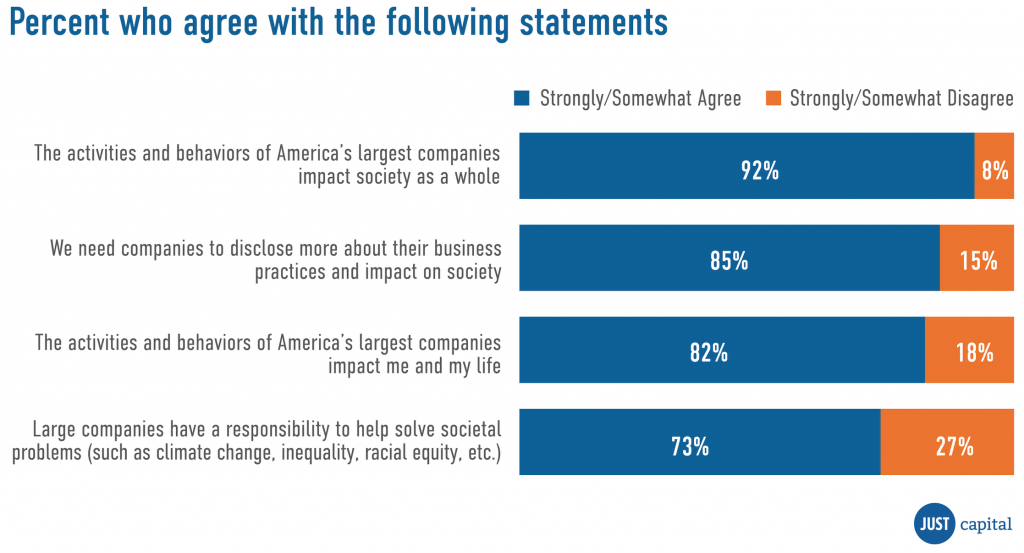 A substantial majority of Americans also agrees that companies need to disclose more about their business practices (85%), and say it is important that companies are transparent about their specific environmental (94%) and societal (86%) impact. These findings signal that there is clearly an unmet need for corporate transparency from America’s largest companies. 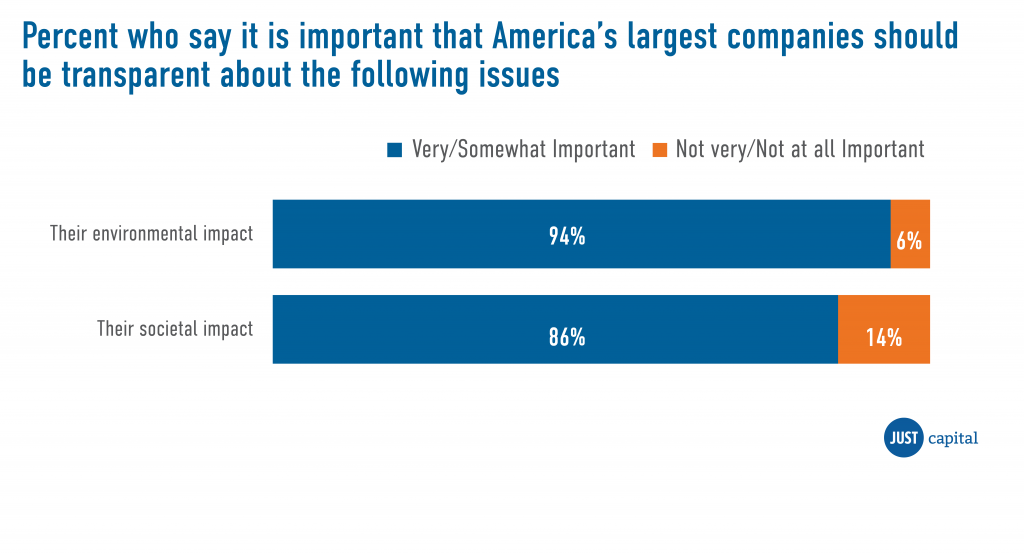 In the context of responsibility to various stakeholders, 80% or more say America’s largest companies have a great deal or some responsibility to provide for the financial security of their workforces, consider the communities in which they operate, and reduce environmental impact. 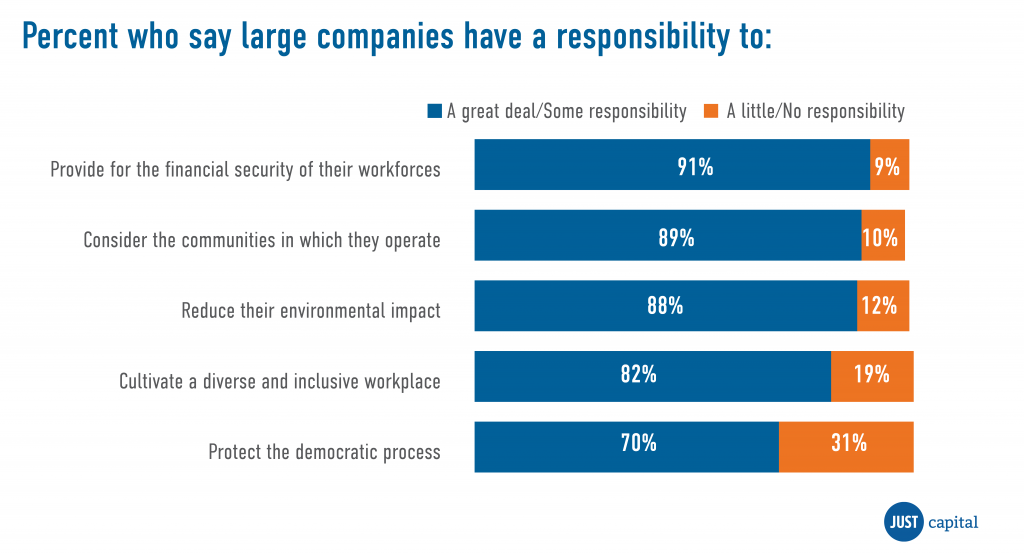 Probing further, the operational metrics that companies should report include consumer issues such as product safety violations and consumer privacy, worker issues such as health and safety statistics and compensation data, and environmental issues such as greenhouse gas emissions. 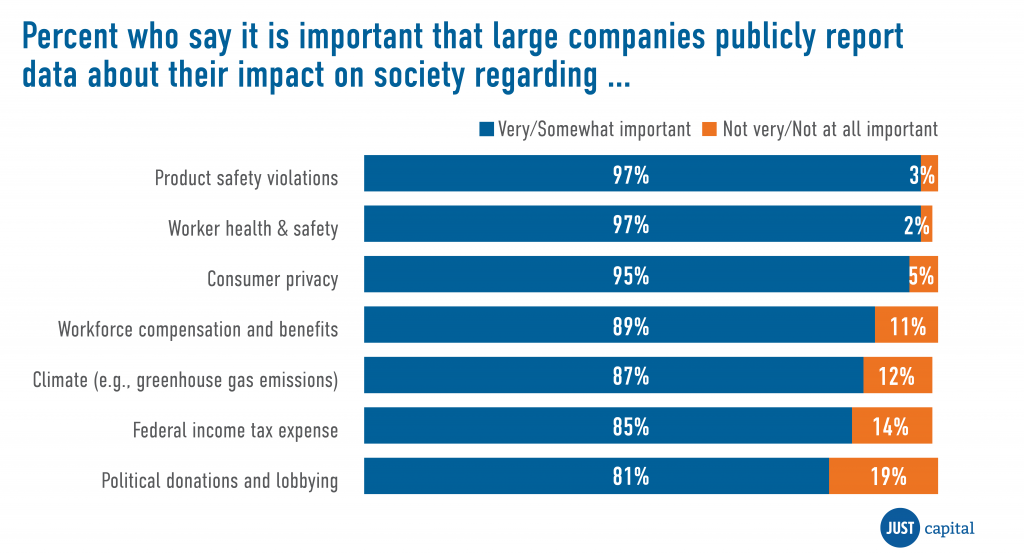 Yet, the exact degree to which companies’ actions impact society and the environment is not directly measurable, due to a paucity of consistent and available data. This is where federal mandates can help encourage companies to be more transparent about their operations. When asked, the public overwhelmingly supports a federal requirement for disclosure on these same metrics. 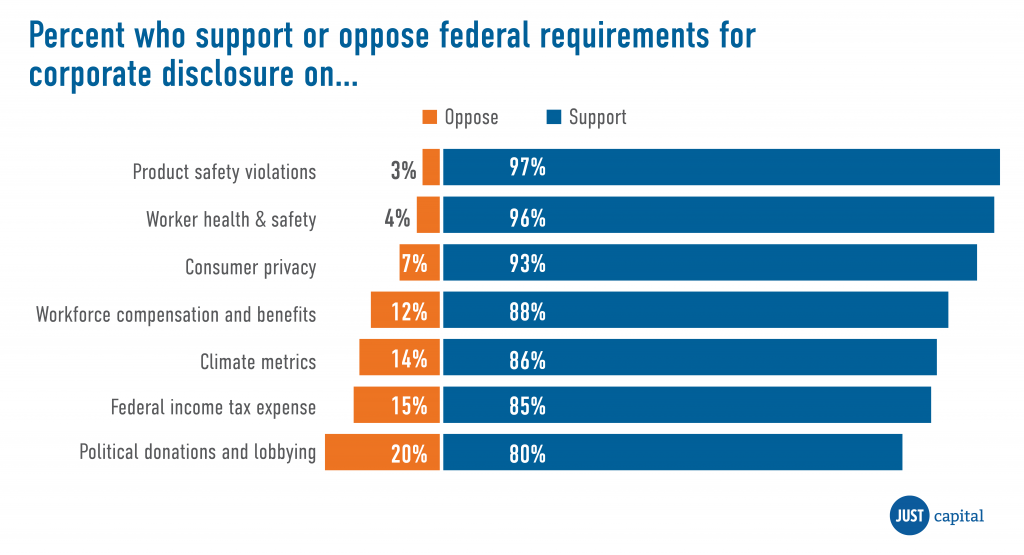 In fact, support for federal requirements are shared across various demographic groupings – including age, race/ethnicity, political outlook, and geographic location – underscoring the public’s broad-based desire for a more regulated system of corporate transparency and disclosure in the U.S. The following chart looks at support for federal requirements for climate metrics. 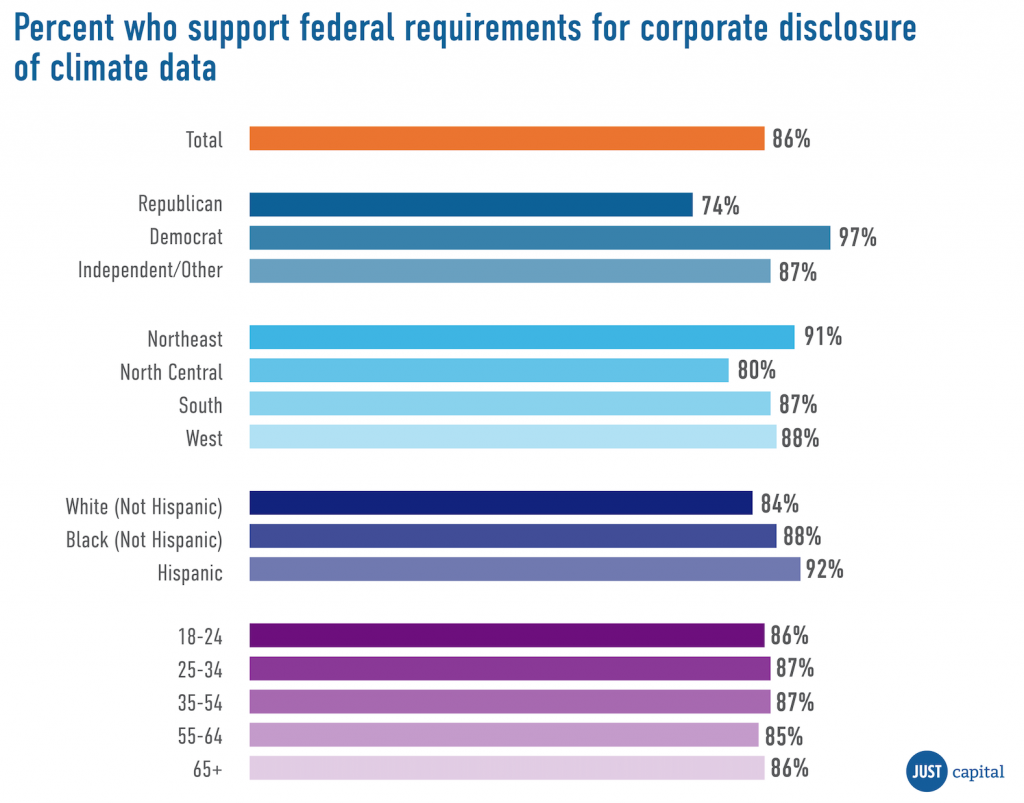 In order to encourage disclosure and achieve parity on the metrics that are utilized, companies need reporting standards, allowing investors and consumers to compare companies across industries. This is a policy that a vast majority of Americans support, with nine in 10 saying it is important that corporate social and environmental data are reported in a common, standardized way. 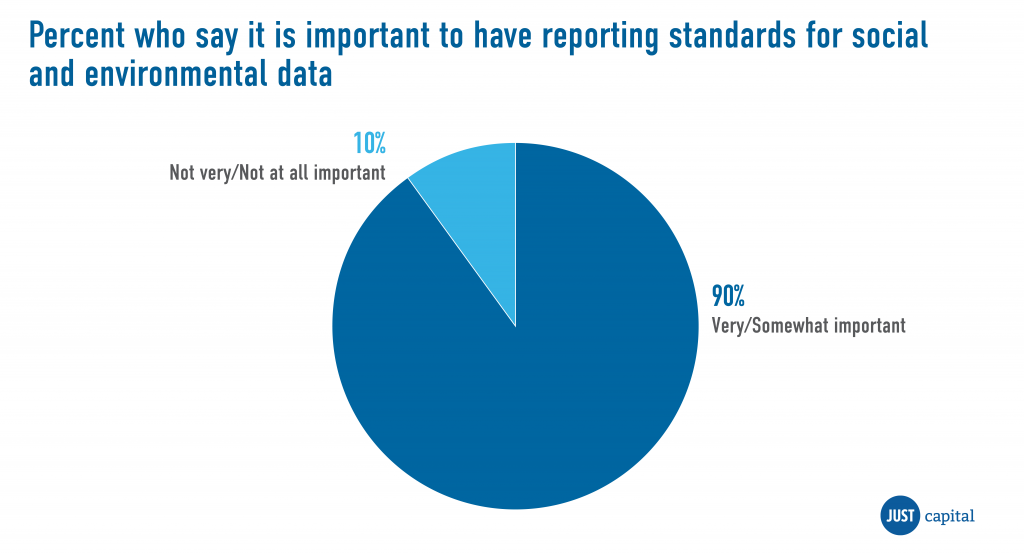 And once again, consensus on this issue is shared across both race/ethnicity and political breaks. 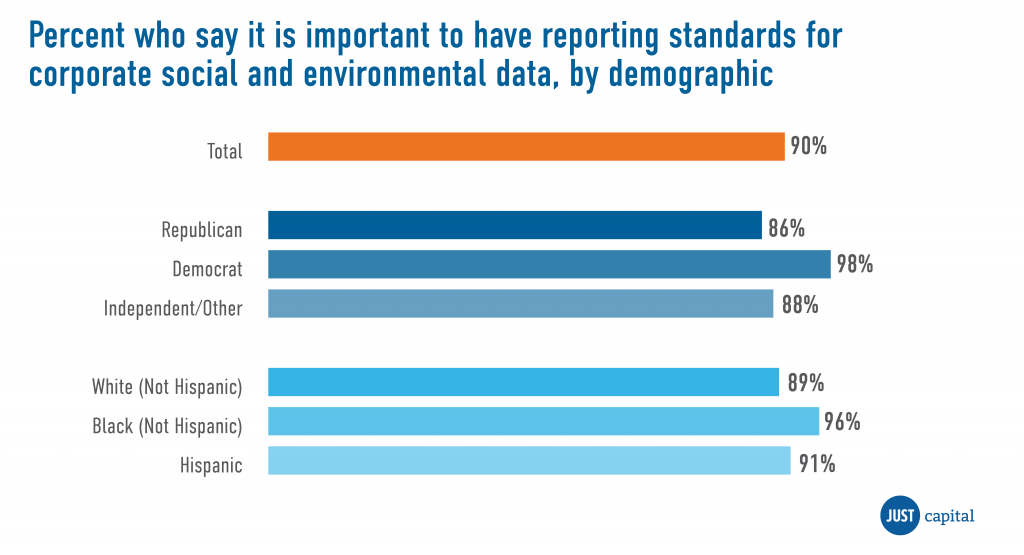 The political divide does not extend to opinions on corporate disclosure

Remarkably, there is broad consensus across political lines that companies need to step up corporate disclosure. Republicans, Democrats, and Independents all share the opinion that companies need to disclose more about their business practices, say that it is important to have a common, standardized mode of reporting corporate social and environmental data, and support federal requirements for the standardization of reporting. 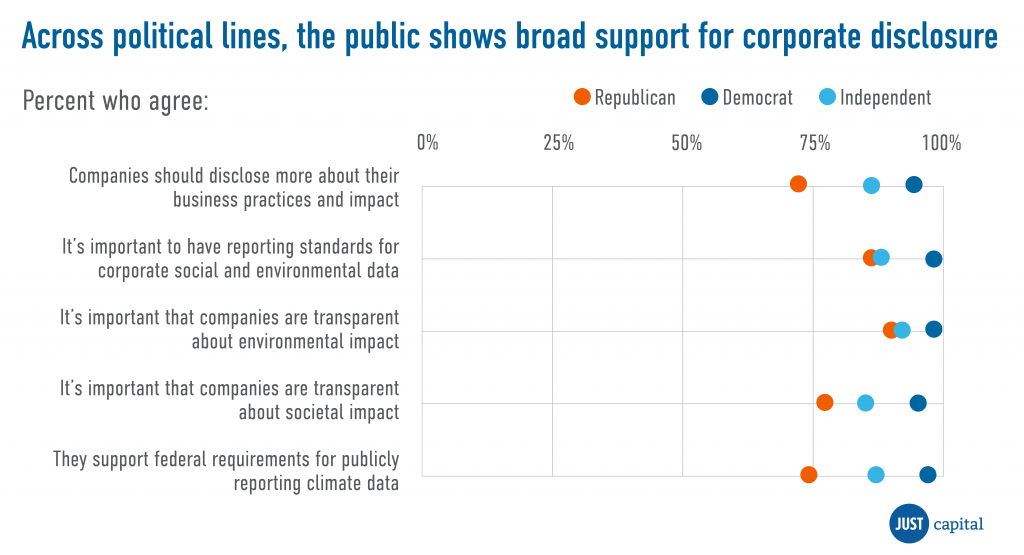 Finally, we sought to find out whether increased transparency would affect Americans’ support for companies that disclosed their operations metrics. We found that 80% said they would go out of their way to support a company that publicly reports operational statistics such as workforce safety or environmental impact over a company that did not report those statistics. 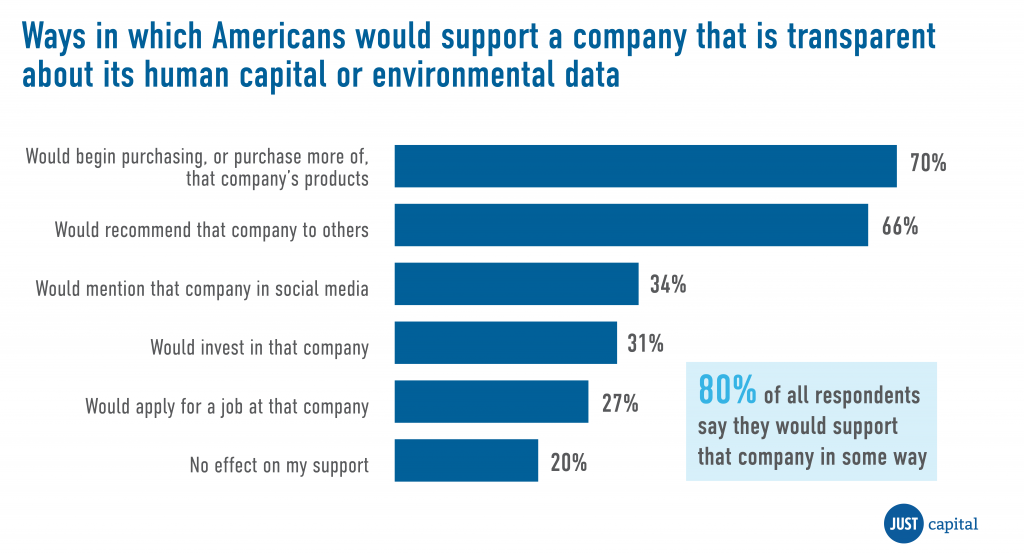 In June 2021, we wrote about why the SEC has a critical role to play in addressing ESG disclosure, and shared our contribution to public comment. The upshot: as a nonprofit whose mission is to align the market’s actions with the priorities of the American people, we have seen a significant acceleration both on disclosure of and requests for data. However, lack of standardization and consistency means that there is only so much investors, researchers, and workers can understand from the publicly available data.

The general public agrees – even across demographic and geographic lines – that corporations have an obligation to be more transparent about their business operations, and as such, federal agencies should act accordingly and implement requirements that will increase disclosure on human capital and environmental data for America’s largest companies.

This survey was conducted online within the United States by SSRS on behalf of JUST Capital in collaboration with Public Citizen and Ceres.

SSRS is a full-service survey and market research firm with more than 30 years of research expertise. SSRS was originally formed to serve academic and policymaker institutions that were interested in methodological rigor. The brand offers a suite of research products and services, including the SSRS Omnibus and its proprietary online Opinion Panel. The SSRS Omnibus is frequently used by researchers from major universities, PR and marketing firms, Fortune 500 companies and media outlets including The New York Times, CBS News and ABC News. SSRS is also a member of ESOMAR and charter member of AAPOR’s Transparency Initiative, which seeks to encourage broader and more effective disclosure of research methods by all organizations with the goal of promoting methodological disclosure.

This survey was conducted between November 30 through December 9, 2021. SSRS interviewed a representative sample of 1,115 U.S. adults (age 18 or older) for this survey from among its online Opinion Panel, a nationally representative, geographically diverse and probability-based web panel reaching respondents in all 50 states. To meet the project’s analytical goals, invitations were sent to ensure that roughly 350 of respondents self-identify as Republican, 350 as Democratic, and the rest are independent or other. Given that this is a probability-based web panel, findings are statistically representative and therefore represent the views of the U.S. adult general population.

The margin of error is +/- 4% at a 95% confidence level. Results were weighted to U.S. Census parameters for age, gender, education, race/Hispanic ethnicity, Census Division and specifically surrounding party identification in order to ensure representativeness of the U.S. population. All margins of error include “design effects” to adjust for the effects of weighting.