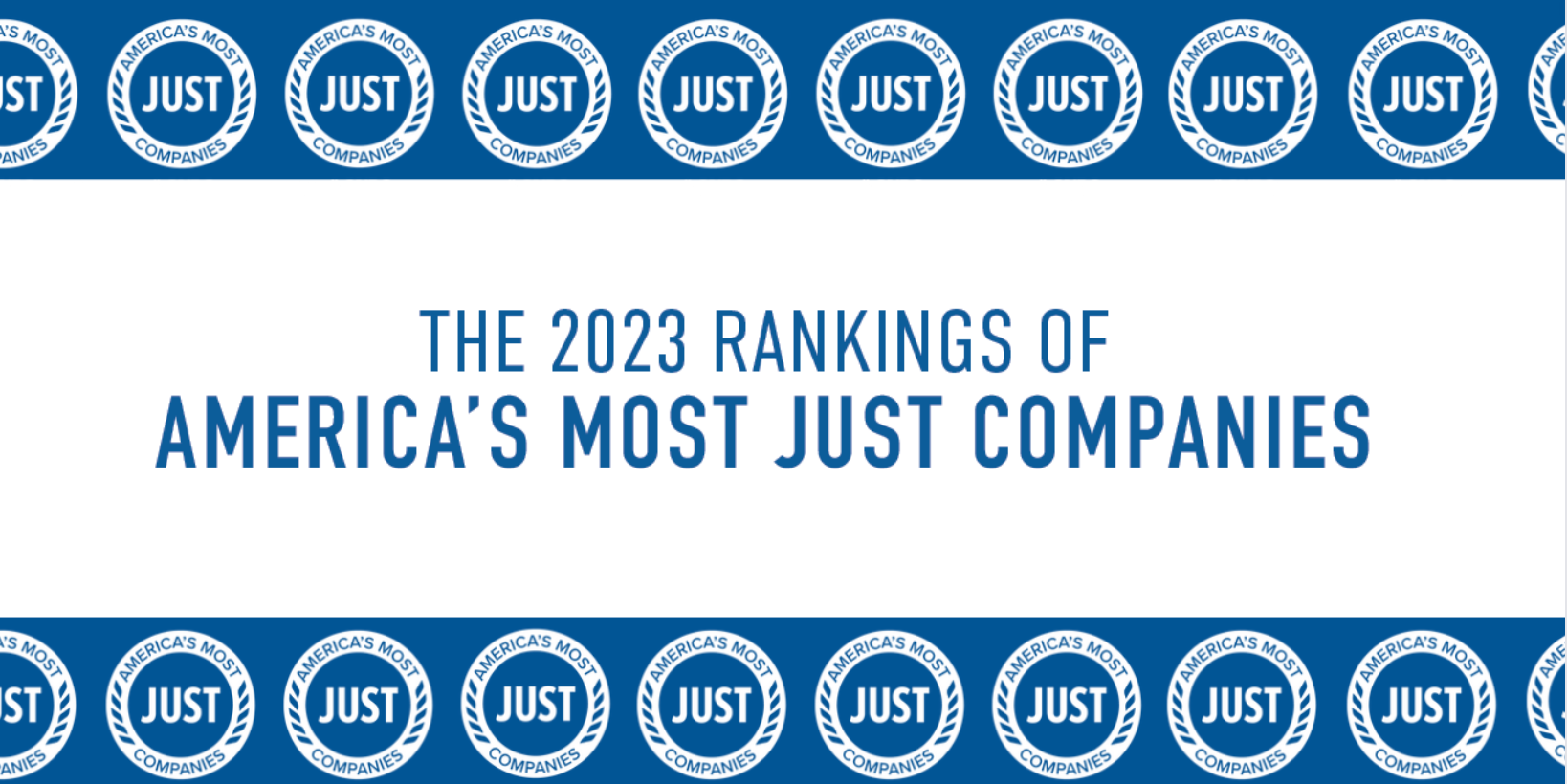 We are proud to announce the 2023 Rankings of America’s Most JUST Companies, led by the JUST 100, in collaboration with CNBC. Each year, we take our polling of what the American public most prioritizes when it comes to just business behavior and see how the largest public corporations in the United States stack up. It’s a massive undertaking fueled by tens of thousands of hours of work over the last year from each and every staff member at JUST Capital.

This year, out of the 951 companies we ranked based on their performance across stakeholders, Bank of America tops the list for the first time, with NVIDIA, Microsoft, Accenture, Truist, Verizon, Hewlett Packard Enterprise, Apple, Intel, and JPMorgan Chase rounding out the top 10.

You can explore the complete Rankings, with detailed breakdowns for each stakeholder metric, on our site, and find links to CNBC’s multimedia coverage at cnbc.com/just100, also showcased at the bottom of this report.

We believe that business can play a role in creating an economy that works for all Americans, and that the evidence shows the best way to build and run a great business comes through a stakeholder-focused approach. Here are some ways that all stakeholders – workers, communities, customers, the environment, and shareholders and governance – are linked, as shown through outperformance of JUST 100 companies. 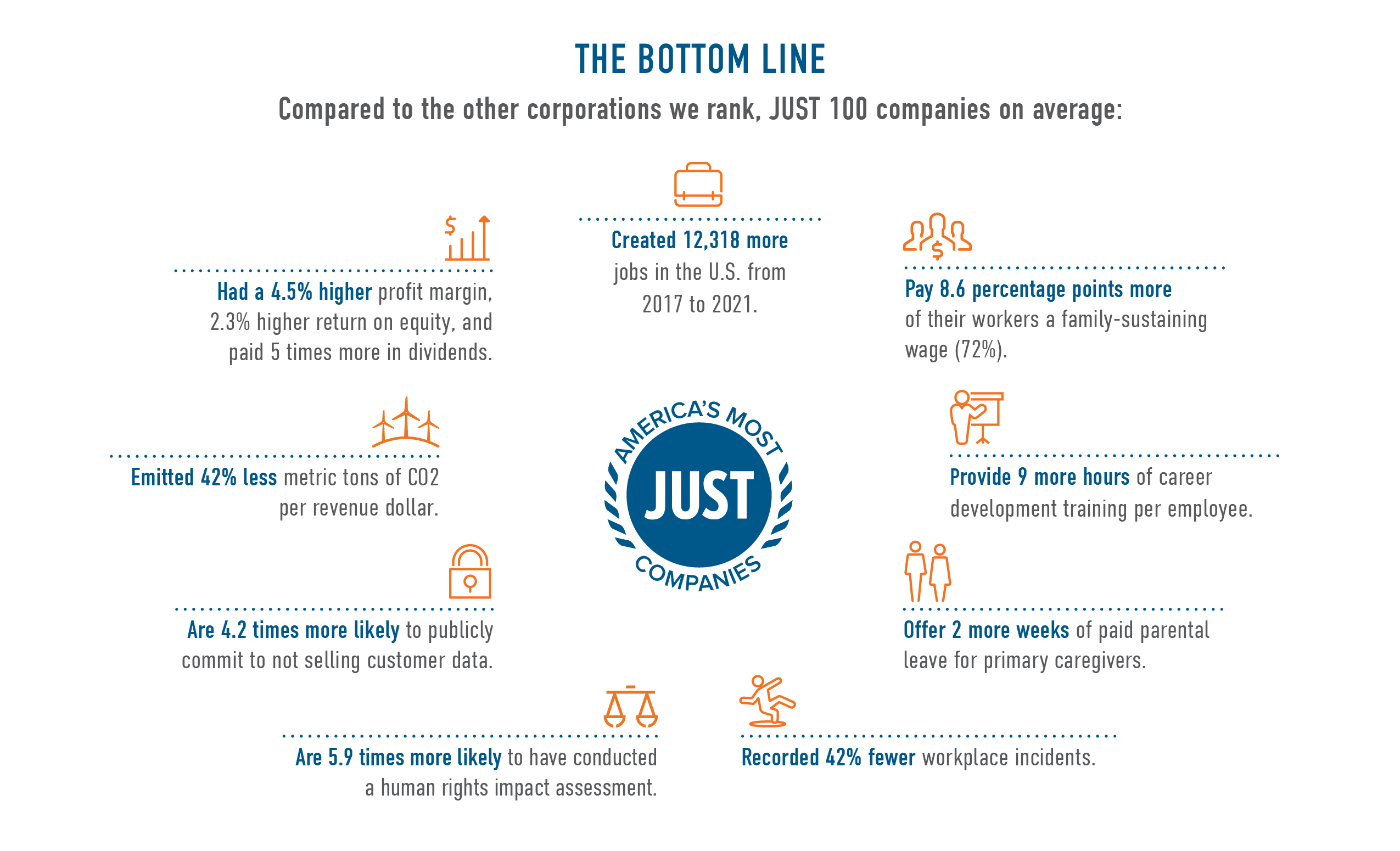 The Issues Powering the Rankings

For this year’s Rankings, our survey research team asked a representative sample of 3,002 Americans to prioritize which Issues matter most. The following chart, pulled from our 2022 Issues Report, shows the probability that an individual would choose an Issue as most important to defining a just company, and serves as the weighting for this year’s Rankings. 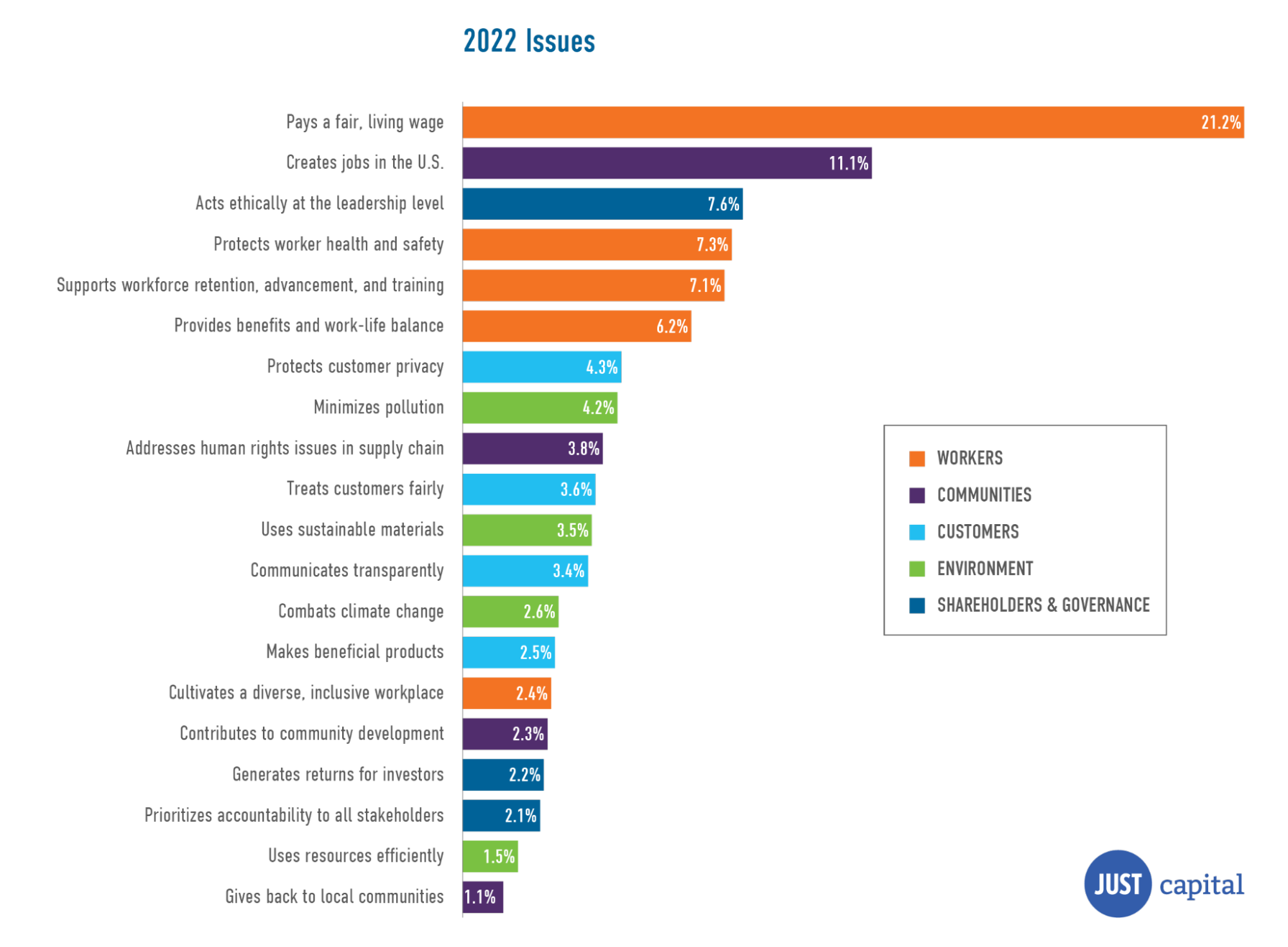 Over the last seven years, Worker Issues have consistently commanded the highest share of priority among the 20 stakeholder-related issues we measure, and this year is no different. As you can see, four of the five Worker Issues – including paying a fair, living wage, supporting workforce training, protecting worker health and safety, and providing benefits and work-life balance – are among the top six priorities of the public, and the collective prioritization of all five worker issues comprise 44% of a company’s score this year.

And despite the ongoing political polarization in the U.S., Americans are united when it comes to just business behavior. Among every demographic group – liberal, conservative, high-income, low-income, men, women, young generations, older generations, and white, Black, and Hispanic Americans – the Workers stakeholder is the top priority. And for each of these demographic groups, the most important Issue is “Pays workers fairly and offers a living wage that covers the cost of basic needs at the local level,” which comprises a significant 21.2% of companies’ scores in this year’s Rankings.

As more industries implement layoffs and fears of a 2023 recession loom, it’s also important to note that the second most important issue that powered significant shifts in the rankings model is “creating jobs in the U.S. and providing employment opportunities for communities that need them.”

We have made enhancements to the way we measure a company’s performance on the top priority of the public – paying a fair, living wage – with the help of our data partner Revelio, that drove significant shifts in the Rankings this year including a new minimum wage disclosure data point and new assessments on living wage, wages compared to industry peers, CEO-to-median worker pay, and more.

This year’s Rankings are led by Bank of America, the first bank to ever top the list, because they’ve been a trailblazer on worker issues (1st in industry and 1st overall). Bank of America raised its minimum wage to $22 an hour and committed to $25 an hour by 2025. It’s invested millions in career development and tuition assistance, offers 16 weeks of paid parental leave for both primary and secondary caregivers, and provides flexible work scheduling and backup dependent care. It is one of 14% of companies to conduct and release the results of its pay equity analysis, and also discloses detailed workforce demographic data by race and gender. The bank is also a strong environmental performer (1st in its industry and 6th overall) and has committed to reaching Net-Zero across its financing activities, operations, and supply chain by 2050, a goal that just 19% of companies in the Banks industry, and 32% of Russell 1000 companies overall, are committed to.

As an industry, Banks made significant gains this year because they categorically outperformed on worker issues, especially in transparency over wage data, pay equity, and commitments to larger national minimum wages than peers. Banks also saw an average Ranking increase of 134 in the “Creates jobs in the U.S.” Issue, the second-highest-weighted of the model (11.1%). Banks are consistently in the top third of our Rankings when it comes to U.S. job numbers and they also have the highest number of companies with second chance/reentry policies, four of which are in the JUST 100.

This year we also developed a new way of factoring gig workers into a company’s Workers score, and penalized six companies for unique events. Download our Methodology to explore other updates to the model this year.

CNBC Spotlights of the JUST 100

CNBC will delve into the data, highlighting trends and spotlighting corporate performance stories about this year’s JUST 100 leaders across the network’s broadcast and digital platforms at cnbc.com/just100. Tune into Squawk Box, TechCheck, and Closing Bellover the next month to hear from CEOs of JUST 100 companies including Bank of America, Microsoft, Accenture, Verizon, JPMorgan Chase, Walmart, VMWare, and more. Our co-founder and chairman, Paul Tudor Jones, will be joining Andrew Ross Sorkin and T-Mobile CEO Mike Sievert on Squawk Box to kick off the coverage this morning at 8:15 a.m. EST.

There’s a lot to unpack, and we hope you enjoy exploring the list and all the coverage to come on CNBC.