This report was developed and written by Kavya Vaghul, Kim Ira, Aleksandra Radeva, and Catalina Caro.

As many of America’s largest companies considered last year how they were going to respond to the country’s reckoning with racial injustice, the conversation quickly turned to disclosure. Public companies are legally required to collect their gender, race, and ethnicity data in an EEO-1 Report, and more CEOs began to consider sharing that information publicly as a matter of accountability and the first step toward an inclusive workplace, which McKinsey’s in-depth research has shown contributes to long-term industry outperformance.

“I’m happy to say that, EEO-1 or otherwise, nearly every CEO I speak to now is thinking about their diversity data and how to improve it,” Tim Ryan, PwC’s US chairman and an outspoken proponent of diversity disclosure, told JUST Capital. As of January 2021, only 6.4% of America’s largest corporations disclosed the type of intersectional data – considering the overlap of gender with race/ethnicity – that could be derived from an EEO-1 Report. That is only 59 companies out of the 928 companies we studied in our 2021 Rankings, but was up by 27 from the end of December. Companies that decided to release their data late last year include Amazon, General Motors, Goldman Sachs, Morgan Stanley, and PepsiCo.

With demographics disclosure on the rise, we decided to go beyond disclosure and take a closer look at the underlying data. While the data sets are limited, we gained general insights about America’s largest companies: Women are still largely underrepresented when compared to the U.S. civilian working force, and there are stark differences at the intersectional level, with specifically non-White and non-Asian groups most underrepresented.

We looked at our universe of the companies we track to analyze what the state of gender, racial, ethnic, and intersectional representation looks like among the companies that disclose demographic data, with data collected through January 2021.

Overall, 42% of these companies disclose a gender breakdown and 32% disclose some type of workforce breakdown by race and ethnicity; 6.4% share intersectional data. To get an idea of how this data underlying these disclosures compared to the country’s demographics, we contrasted it with the gender, racial, and ethnic distribution of the U.S. civilian labor force, age 16 and older – people not currently in the armed forces who are either employed or unemployed and looking for work – as reported in the Census Bureau’s 2019 American Community Survey.

Here are top level findings, comparing the typical Russell 1000 company to the national distribution by gender and race and ethnicity:

Just 42% of the 928 companies we tracked in our 2021 Rankings disclose some information about the gender makeup of their overall workforce. Generally, these disclosures include at least the share of employees who identify as women. While the gender diversity disclosure is up from 38% across the companies in our 2020 Rankings, the little underlying data available paints a story of underrepresentation of women among America’s largest companies so far. 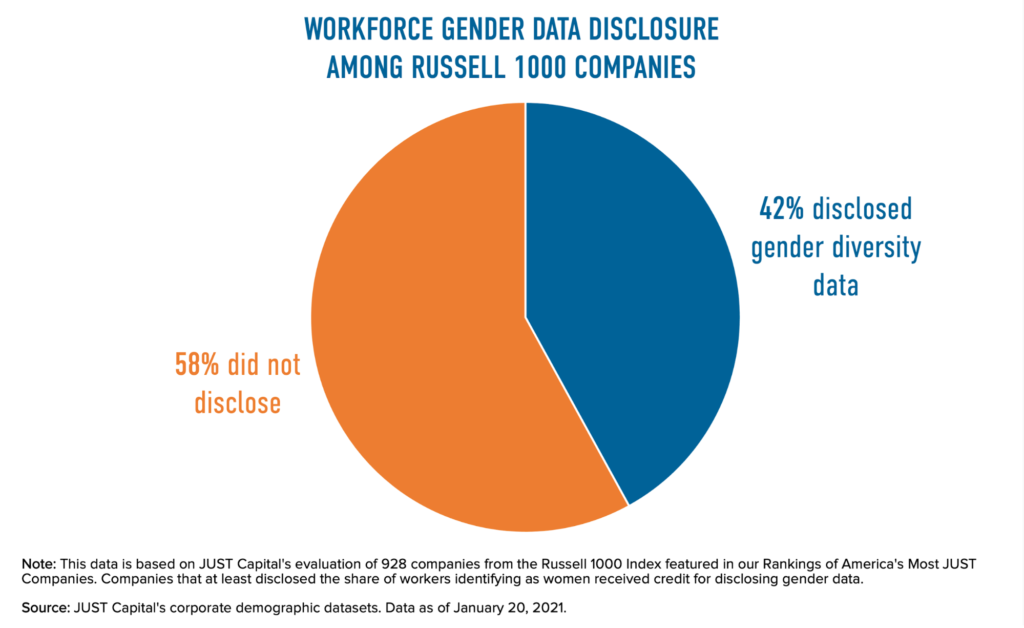 A brief look at gender diversity at the 395 Russell 1000 companies that disclose this data shows that on average, 61% of workers identify as men and 39% identify as women. Comparing this to the gender distribution among the U.S. civilian labor force, age 16 and older, we found that on average, women in the Russell 1000 are underrepresented by 8 percentage points (39% versus 47%) – and conversely, men are overrepresented by over 8 percentage points (61% versus 53%).

The gap between full representation and the typical gender composition among Russell 1000 companies can partially be explained by the fact that industries represented in the Russell 1000 have varying rates of gender diversity data disclosure.

Unlike gender diversity disclosure, data on racial and ethnic diversity among Russell 1000 companies is harder to come by and largely non-standardized. Just 32% of companies have some type of race and ethnicity diversity data, but this can vary from reporting the share of non-White workers to accounting for highly disaggregated race and ethnic groups like American Indians and Alaska Natives or Native Hawaiians and Pacific Islanders. For this reason, it can be challenging to determine the state of racial or ethnic representation. 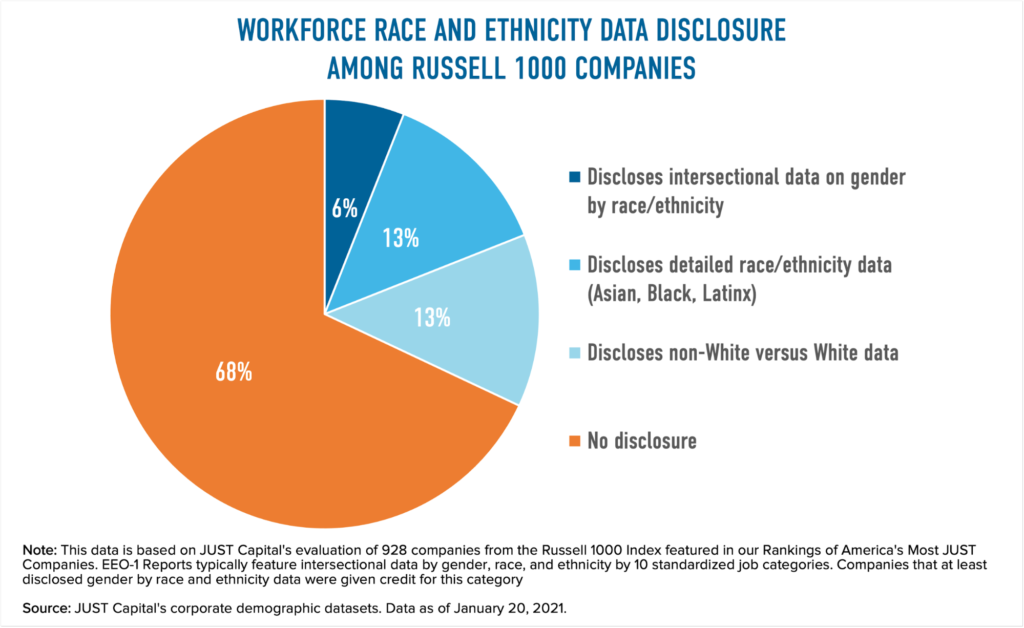 At the highest level, we find that on average, 38% of workers among the 298 companies that disclose some racial or ethnic diversity data identify as non-White. This is on par with the overall share of non-White persons from the American Community Survey: Across the U.S. civilian labor force, age 16 and older, 39% are non-White.

To unpack this further, we take a closer look at the 180 companies that disclosed enough detailed demographic data for Asian, Native Hawaiian, and Pacific Islander; Black or African American; Hispanic, Latinx, or of Spanish origin; and White workers. At first glance, the average racial and ethnic distribution at Russell 1000 companies that disclose detailed demographic data appears to align with the composition of the U.S. civilian labor force, age 16 and older, with a few notable exceptions. 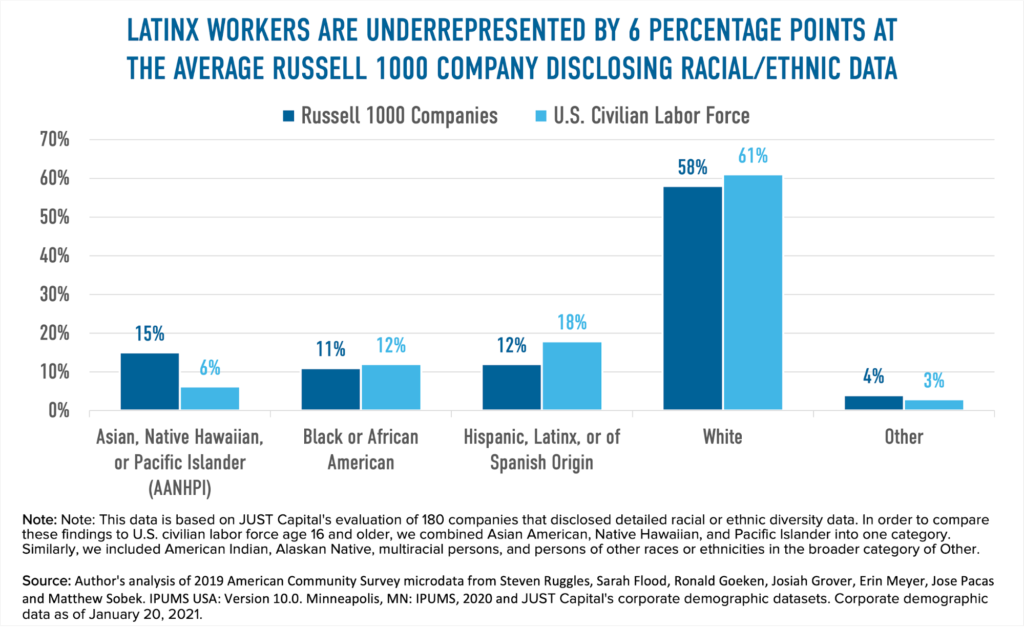 The first such exception is the share of Asian, Native Hawaiian, and Pacific Islander (AANHPI) workers, who, for the purposes of this analysis and consistent with other demographic data reporting, are grouped together. Our data shows that, at the average Russell 1000 company, this group comprises 15% of the workforce, while the same group represents merely 6.8% of America’s work-eligible population. A deeper dive into the data reveals that the overrepresentation of this group is largely attributable to the high share of Asian workers in particular among companies reporting, while Native Hawaiian and Pacific Islander workers comprise a much smaller share on average of Russell 1000 companies’ workforce.

The other exception worth noting is the underrepresentation of Hispanic, Latinx, and persons of Spanish origin across the Russell 1000 companies that disclose this data. We found that on average, Latinx workers are underrepresented by 6 percentage points (12% vs. 18% of the overall U.S. civilian labor force, age 16 and older).

As mentioned before, limited guidelines for a standard racial and ethnic diversity data reporting structure result in companies across the Russell 1000 utilizing various frameworks for reporting such data. The inconsistency in reporting may offer a partial explanation for the trends we observe above. Nonetheless, the current data illuminates a clear pattern of over- and underrepresentation of certain groups among America’s largest companies.

The patterns of over- and underrepresentation described in the previous sections are evident, too, when we inspect representation at America’s largest companies by the intersection of gender and race and ethnicity. Only 6.4% of companies among the Russell 1000 companies we ranked last year – only 59 companies – release workforce demographic data that is intersectional, most frequently found in EEO-1 Reports.

Though disclosure is still so low, the intersectional data allow us to track the degree to which women or men of color are impacted by disproportionate barriers to representation. Overall, the average company reporting data by gender as well as race and ethnicity comprises 16% women of color and 25% men of color. This definition of people of color counts AANHPI workers, who are overrepresented on aggregate at the many tech companies that publish their EEO-1 Report and, by extension, intersectional data. For example, our comparison shows that at the typical company with intersectional data, AANHPI women are represented at nearly 2.5 times the rate found in the U.S. civilian population, age 16 and older, (7.5% versus 3.0%) and AANHPI men at a 4.4 times (14% versus 3.2%). 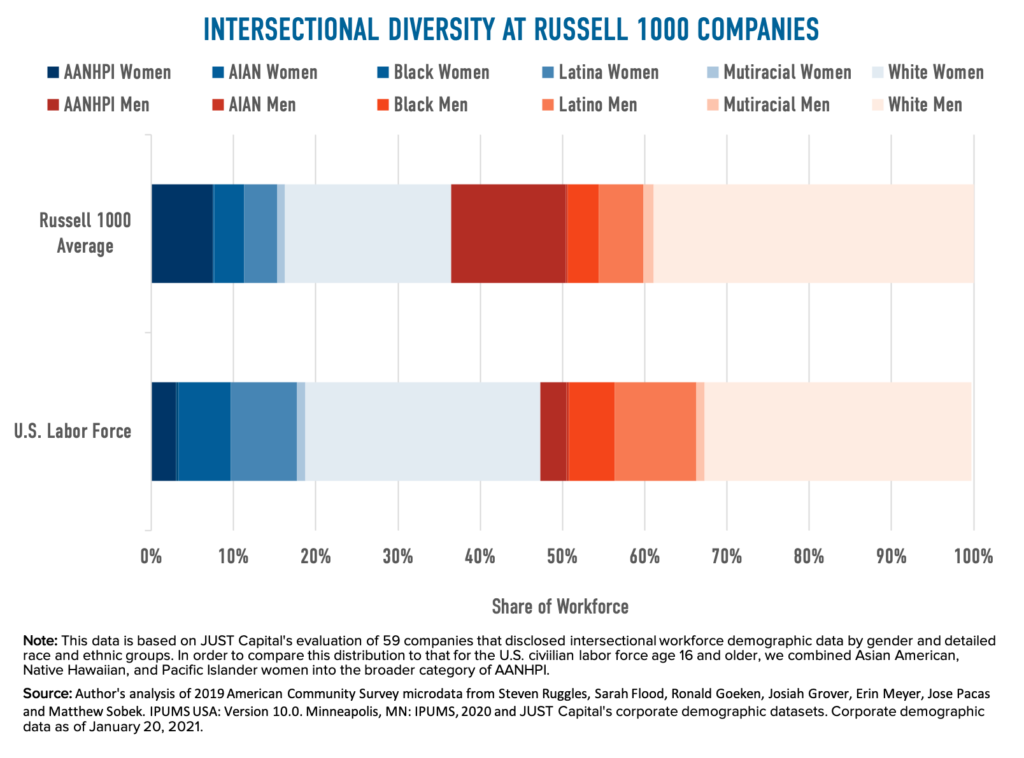 Whether we look at gender, race and ethnicity, or intersectional data, we find that on average, women and people of color – specifically, Black, Latinx, and Indigenous people of color – are underrepresented in comparison to the U.S. labor force among companies in the Russell 1000 disclosing demographic information. This is despite the fact that America’s largest corporations in the Russell 1000 make up roughly 13% of employees in the United States.

While we would expect the make up Russell 1000 companies to more closely reflect gender, race, and ethnicity trends among workers in the broader civilian labor force, results are skewed by which companies disclose demographic data, and which industries they are in, especially since we have not taken a weighted average by the share of companies disclosing the data in a given industry. The unweighted averages instead demonstrate that both gender and racial occupational segregation – the over- or under-indexing of certain groups in jobs or sectors – continues to be pervasive in the U.S. labor market.

This caveat is not an excuse, however, for the poor representation of women and people of color among the companies that do disclose demographic data. Gender and racial occupational segregation is caused, in part, by discrimination in the labor market, and it has pernicious consequences for exacerbating privileges for some or inequities for others, such as wage gaps.

An important step toward racial equity

Our analysis shows that gender, race, ethnicity, or even intersectional demographic data disclosure is not a substitute for actually addressing the state of representation of women and people of color among America’s largest companies. Though demographic data disclosure is seen as a first step in accountability, companies must consider what the data tells us and identify the many other steps that are needed to get to full representation.

As PwC’s Tim Ryan told us, even the most well-intentioned CEOs can be wary of releasing their demographic data, but the public accountability is a critical step toward progress. Ursula Burns, who became the first Black woman CEO of a Fortune 500 company during her tenure at Xerox, has been a passionate advocate for moving companies to embrace disclosure.

In a recent interview with CNBC, she explained that corporate leaders have paid lip service to the values of inclusive cultures and moving the needle on diversity for year, but the momentum she is seeing now has convinced her there is finally a real opportunity for change. “We’re making this a movement,” she said.

This analysis is based on nearly 30 variables worth of demographic information about the gender, racial, and ethnic distribution of workers that JUST Capital collects for each company in the Russell 1000 Index as part of our data collection processes for our annual Rankings. All of this data is derived from publicly available reporting – from Corporate Social Responsibility reports, Diversity and Inclusion reports, and annual filings, among other sources – directly by companies in the Russell 1000 index.

Not every company shares this information publicly, and the companies that do disclose different variables. For this reason, as part of our data cleaning process, we convert all gender, race, and ethnicity data to distributional percentage format. In other words, if a company shares the raw number of workers identifying women and men, we find the share of women and men by dividing the counts in each group by the total sum of men and women. In the very rare case that a company includes a category for individuals who choose not to participate in internal surveys based on self-identification, we readjust the shares by gender or race and ethnicity to reflect only the distribution among participants. The data cleaning process yields a dataset that includes at least the share of workers identifying as women and/or non-White for each company that has disclosed the information. Contingent on the amount of detail provided in racial and ethnic diversity data, we are also able to calculate the distribution of more disaggregated racial, and ethnic, and intersectional groups for a given company.

Comparative data about the gender, racial, and ethnic distribution of the U.S. civilian labor force comes from our analysis of 2019 American Community Survey microdata, retrieved from IPUMS USA (Version 10.0). For this analysis, we limit the universe of workers to civilians aged 16 and older who are currently in the labor force – people who are either employed or unemployed and looking for work – but not in the armed forces. We utilize person-level weights to find the distribution of these workers by gender, race and ethnicity, and gender by race and ethnicity.