Following the death of George Floyd, Breonna Taylor, Ahmaud Arbery, and others – and the reckoning with racial injustice that followed – many of America’s largest companies responded by releasing public commitments to advancing racial equity. Companies across the board have pledged to boost their diversity, equity, and inclusion efforts by increasing the representation of Black, Indigenous, and People of Color (BIPOC) workers among their ranks, by instituting more equitable hiring, retention, and promotion policies, as well as other measures.

To hold companies accountable to these commitments, advocates from regulatory, research, and investor communities have asked companies to release their diversity data as a first step toward establishing a benchmark for improvement. But despite this consensus, there is currently very little guidance on what to disclose, resulting in inconsistent reporting of diversity data across corporate America. In seeking a more standardized method for disclosure, EEO-1 Reports – which provide a demographic breakdown of a company’s workforce by race and gender to the Equal Employment Opportunity Commission (EEOC) – could provide a helpful framework by which to make reporting on racial and ethnic diversity more consistent.

Last fall, the Securities and Exchange Commission (SEC) amended Item 101(c) under Regulation S-K, calling on employers to disclose human capital measures or objectives that a company deems material to its business, a step beyond the previous requirement to only disclose the number of employees. Even with this amendment, the new human capital reporting requirements make no mention of diversity data disclosure. In response, SEC Commissioner Allison Herren Lee outlined the importance of reporting on workforce demographics in her speech “Diversity Matters, Disclosure Works, and the SEC Can Do More,” noting that insufficient reporting requirements from the SEC has led to gaps and inconsistencies in disclosure. Lee and her colleague, Commissioner Caroline Crenshaw, spoke out against the SEC’s principles-based approach to human capital reporting and emphasized the need for a set of standardized requirements.

The lack of detailed and specific requirements leaves it to the discretion of companies themselves to determine what data is disclosed. Our own research has shown that, while 30% of companies disclose data on the racial and ethnic composition of their workforces, the detail of these disclosures is highly varied. For example, some companies disclose only on the number or share of Non-White workers, while some provide data on the number or share of Asian, Black, or Latinx groups, and others report highly intersectional data by gender, race, and ethnicity. When given the option, however, most companies deem diversity immaterial to their operations and do not share their diversity data. We have found that 70% of companies in the Russell 1000 do not have demographic data disclosure. 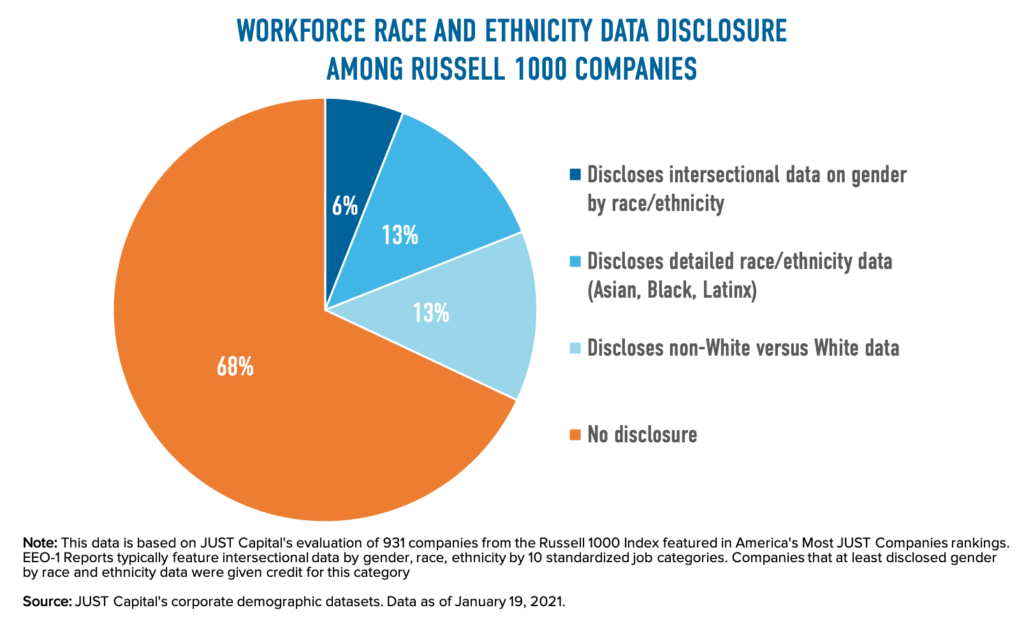 To address the lack of standardization and persistent gaps in reporting of race and ethnicity data, top firms in the investor community have advocated for companies to release their EEO-1 Reports. State Street was an early advocate for this framework, and most recently, BlackRock joined the ranks of investors asking companies to disclose the racial, ethnic and gender makeup of their employees. Players are able to communicate with the dealer via live chat as well as share their excitement with friends, best station casinos in las vegas family and co-workers.

The EEO-1 Report is currently viewed as a “gold standard” for disclosing workforce data on racial and ethnic diversity for several reasons. For one, it offers a detailed breakdown of each company’s workforce by gender, race, and ethnicity in the following categories: American Indian or Alaskan Native; Asian; Black or African American; Hispanic or Latino; Native Hawaiian or Other Pacific Islander; Two or more races; and White, as well as 10 standardized job categories that give a good sense of representation within a company not only as a whole, but also in senior and leadership positions.

In addition to the intersectionality of its reporting, it could be relatively easy for companies to adopt: companies are already required to maintain this data and report it to the EEOC. If the S-K included reporting on data found in EEO-1 Reports, it could alleviate the burden of having to prepare additional workforce demographic data. Doing so would also make it more possible to assess the current state of all companies’ diversity and benchmark their progress over time. The standardized reporting structure of the EEO-1 Report would also make it possible to compare some forms of diversity across companies and across industries.

It is important to note, though, that EEO-1 Reports do not capture all forms of diversity; notably, measures of diversity around non-binary gender identity, sexual orientation, disability, and veteran’s status, among other important demographic identifiers, are not covered by EEO-1 Reports. Nonetheless, given its intersectional reporting framework on gender, race, and ethnicity, the EEO-1 Report could serve as an important starting point toward more standardized and comprehensive demographic reporting.

Regulation S-K presents an opportunity not only to require increased reporting of demographic data but also for advocates from the regulatory, research, and investor communities to align on a clear, consistent, and comparable reporting framework. JUST Capital will continue to work with companies to release their EEO-1 Reports, acknowledging that, while this reporting framework is not perfect, it provides a practical and important option for companies to disclose diversity data in a standard format.