This week, Intel made a splash in the diversity and inclusion world when it released its 2019 Diversity Report, and, for the first time ever, released coveted data on its employees’ wages. The company is no stranger to releasing granular information about its workforce demographics, but it turns out that Intel is one of a handful of companies that is paving the way for transparency and disclosure around diversity.

Less than half of Russell 1000 companies share workforce demographic data.

This year, JUST Capital included a new data point evaluating whether companies in the Russell 1000 Index disclosed statistics on the gender and racial/ethnic composition of their workforce. We found that overall, 40% of companies shared some information about diversity statistics. Breaking this down further, 14% disclosed gender or ethnicity statistics, 22% disclosed gender and ethnicity statistics, and 4% — just 32 companies — disclosed highly detailed data on workers’ gender and ethnicity by occupation, which is typically shared by private employees with the Equal Employment Opportunity Commission (EEOC) through the EEO-1 Survey. (See Figure 1.) To be clear, publicly disclosing an EEO-1 Survey is the gold standard. 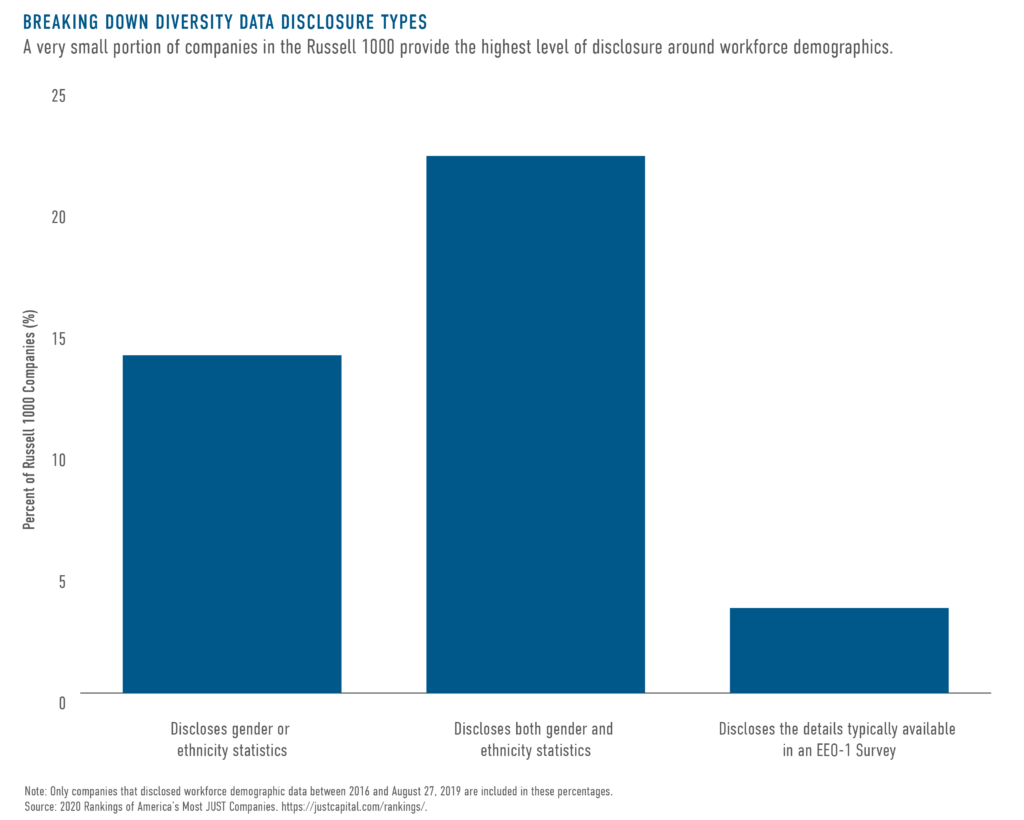 Certain industries are more likely to disclose workforce demographic data than others.

When taking a look at these trends by industry, we find that some industries have greater rates of disclosure than others. For instance, companies in the Food & Drug Retail industry and Utilities industry are more likely to share some information on their workforce demographics. Conversely, disclosure is low among companies in the Commercial Vehicles & Machinery industry and the Household Goods & Apparel industry (See Figure 2.) In only five industries, more than 50% of companies have some type of disclosure. 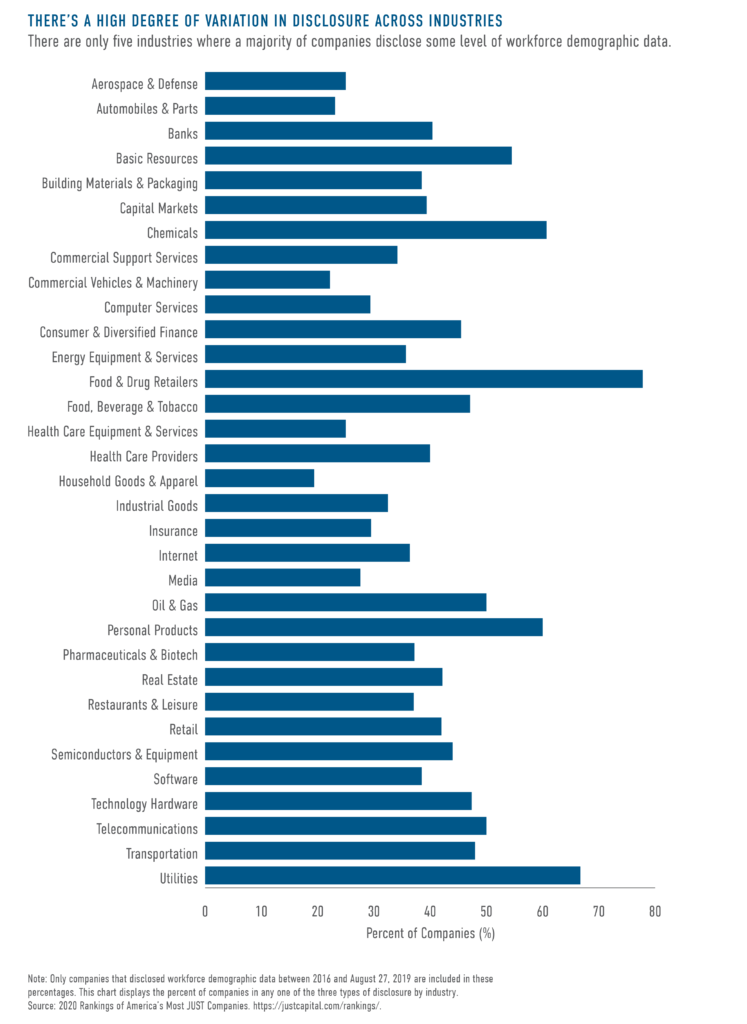 Overall, it’s difficult to see a pattern when looking across all types of disclosure. But, when we specifically look at companies that disclose highly detailed data on workers’ gender and ethnicity by occupation, a clear theme emerges.

Companies in Tech make up the majority of EEO-1 style demographic disclosures.

Drilling down further, we ask: What types of companies are meeting the gold standard? The simple answer is Tech. Across the 32 companies who disclose highly detailed gender and ethnicity data by occupation group, 19 (close to 60%) fall into the Tech sector, which includes our Computer Services, Semiconductors & Equipment, Software, Technology Hardware, and Internet industries. 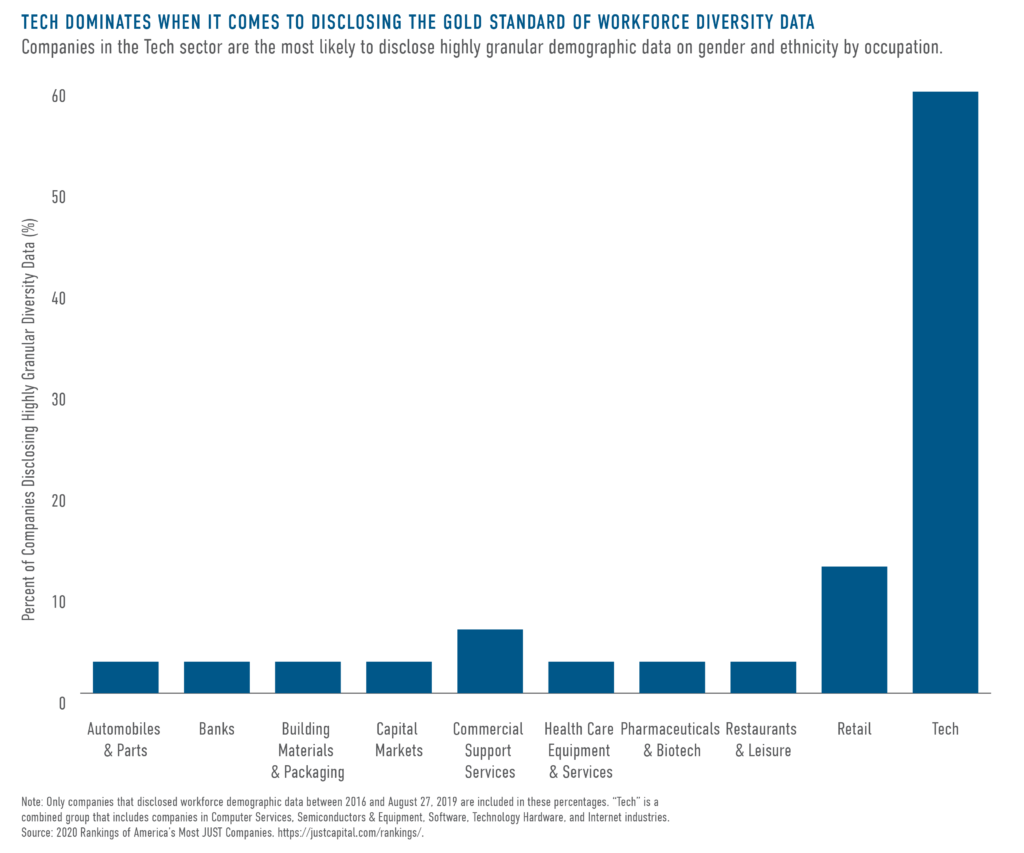 Since a call to action to release numbers 2013 in light of concerns about the leaky pipeline of women engineers, companies in Tech have increasingly been sharing their diversity statistics. While the actual data doesn’t paint a rosy picture of diversity in Tech, disclosing highly granular data is a critical step in the pathway to building more diverse and inclusive workplaces and holding these companies accountable for change.

The vast majority of companies in the Russell 1000 have a long ways to go when it comes to reaching the gold standard of disclosing workforce demographic data. But companies like Intel are pushing the envelope when it comes to disclosure by sharing employee wage band data by gender, ethnicity, and occupation — similar to what would be submitted to the EEOC in Component 2 of the EEO-1 Survey. Intel’s actions have added a new dimension to our understanding of what diversity, equity, and inclusion looks like at companies. And in the process, they are changing the disclosure landscape by setting a new gold standard. Other companies will have to follow suit.