As we continue to move forward from the COVID-19 pandemic, we find ourselves in the midst of an economic sea change – in one of the tightest labor markets in history despite millions of Americans still out of work. In August alone, an unprecedented 2.9% of the entire workforce, some 4.3 million people, quit their jobs as part of the labor market reckoning dubbed The Great Resignation. And American workers rose up during “Striketober” to demand better working conditions and higher pay.

It remains to be seen what the long-term impacts of these shifts will be – and whether this is a temporary blip for our economy or a greater shift in how people think about the role of business in society. In this year’s Survey of Americans’ Views on Business, we’ve turned to the public once again to ask them how they think corporate America is doing today – and provide a lookback on our findings over the years to see how views have shifted.

Since 2015, JUST Capital has surveyed more than 150,000 demographically diverse Americans, asking them what they believe is most important when it comes to just business behavior. Polling the public not only helps us understand what Americans want from corporate leaders today, it provides a data-driven roadmap for how companies can better align their business with the public’s priorities and help address the country’s most pressing societal challenges.

In 2021, many of the positive views we’ve heard from the public from past surveys seem to be reversing course, and Americans increasingly believe that business is heading in the wrong direction, with a decreasing focus on workers in favor of shareholders. But they also believe that corporate leaders can play a critical role in addressing core societal issues – from income inequality (70%) to racial equity (64%) to climate change (56%).

“Organizations should not be creating the world’s problems but actually solving them,” suggested former Unilever CEO and JUST Capital Board member Paul Polman in a recent Financial Times interview. Americans agree that companies should aim to do more good by focusing on their stakeholders’ long-term interests and taking responsibility for their impact on the wider world.

Here’s what we learned:

Capitalism Is (Still) Not Working for Most Americans

A majority (58%) says that our current form of capitalism is not working for the average American. This finding is supported by 61% who agree “The Coronavirus pandemic has made it clear that America needs a more evolved form of capitalism.” These two findings underscore that, in the eyes of the public, large companies are still operating like business as usual, and the average American is not reaping the benefits promised by the capitalist model. 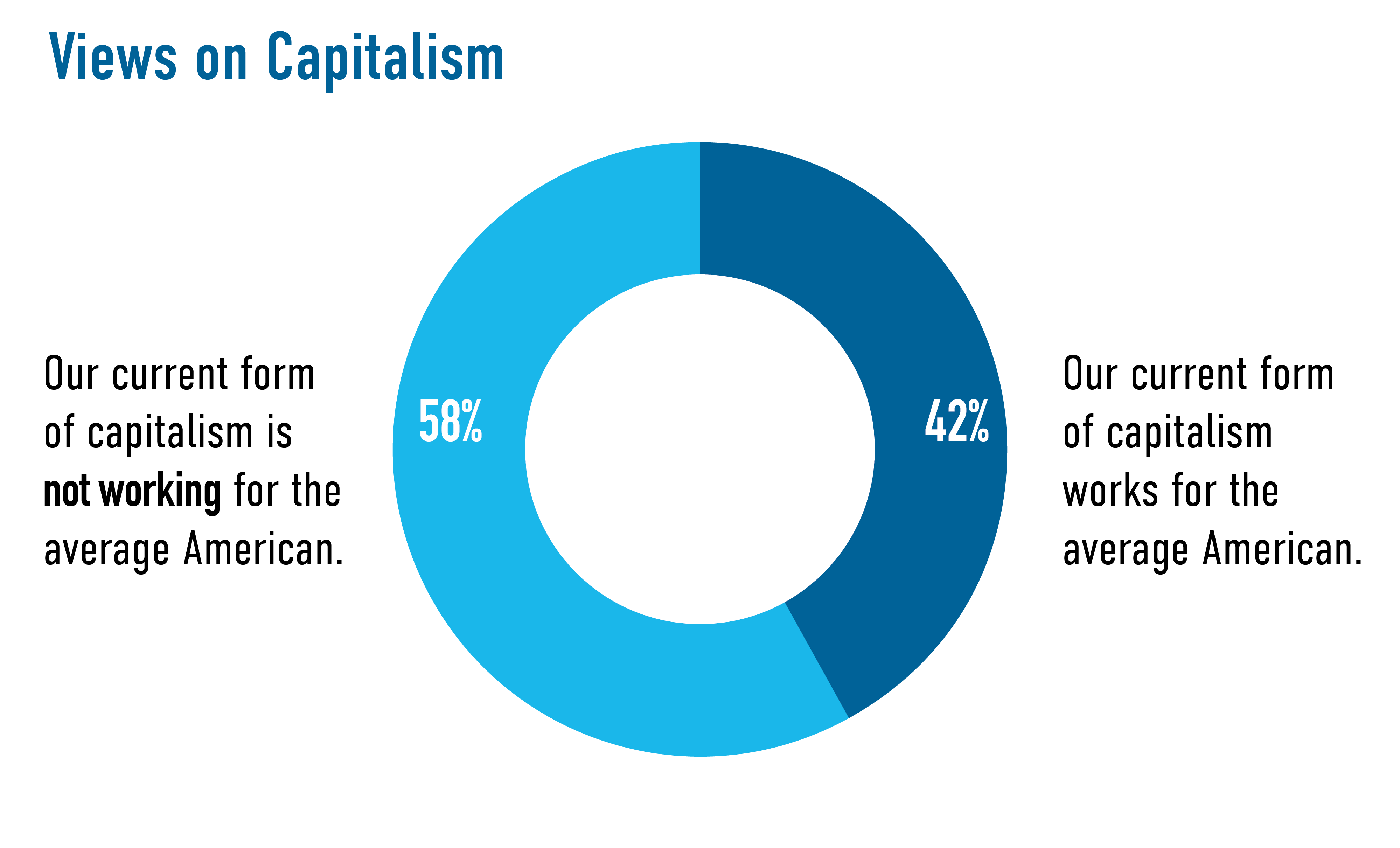 By the same token, Americans’ trust in business has stagnated. Although Edelman’s Trust Barometer shows that business is the most trusted institution (compared to major institutions such as government and media), our research shows that Americans’ trust in business has plateaued over the last four years, with roughly equal proportions saying they trust companies (48%) as distrust them (47%). 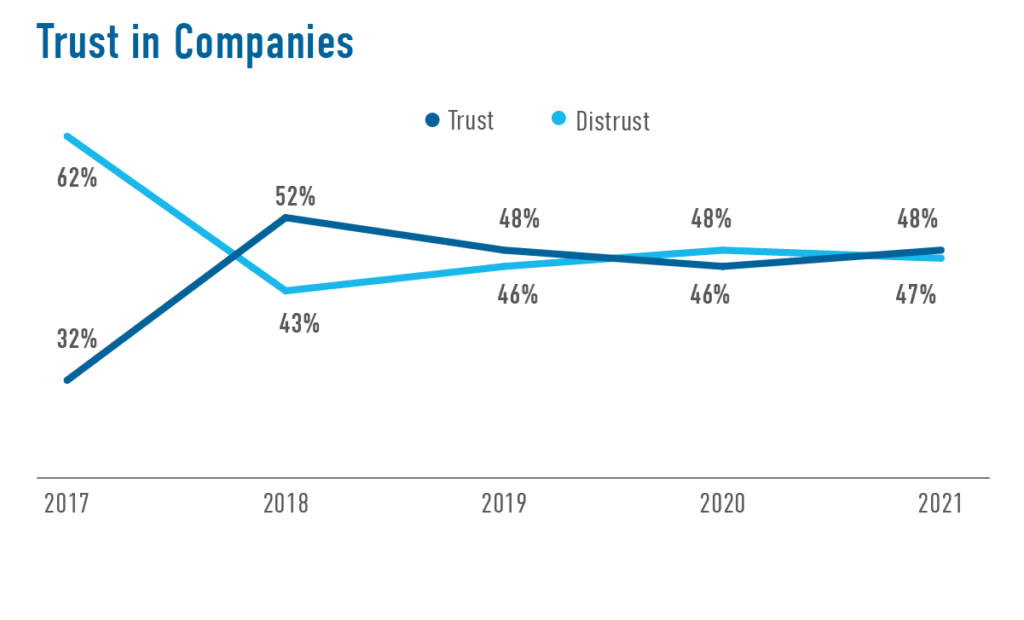 Companies Are Heading in the Wrong Direction 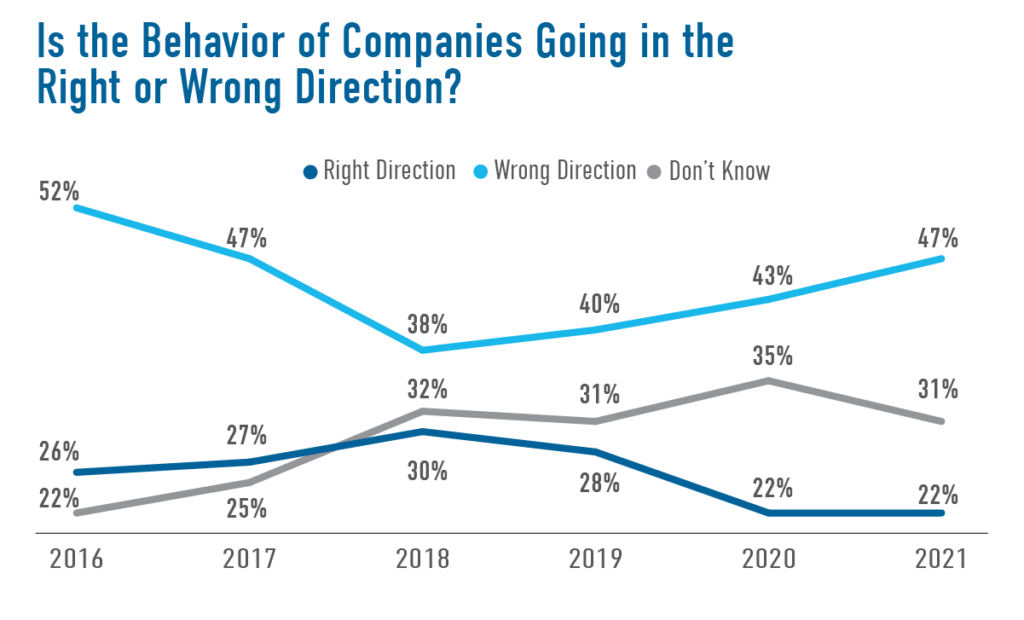 Positive Impact on Stakeholders Is Waning

In August of 2019, CEOs of the Business Roundtable challenged Milton Friedman’s shareholder primacy doctrine and redefined the purpose of a corporation to promote “an economy that serves all Americans.” All told, today 243 signatories have committed to lead their companies for the benefit of all stakeholders, which includes serving their workers, customers, communities, the environment, and shareholders.

Yet in the two years since that announcement, there is significant skepticism that companies are actually following through on their commitments: 84% agree that companies “often hide behind public declarations of support for stakeholders but don’t walk the walk.” 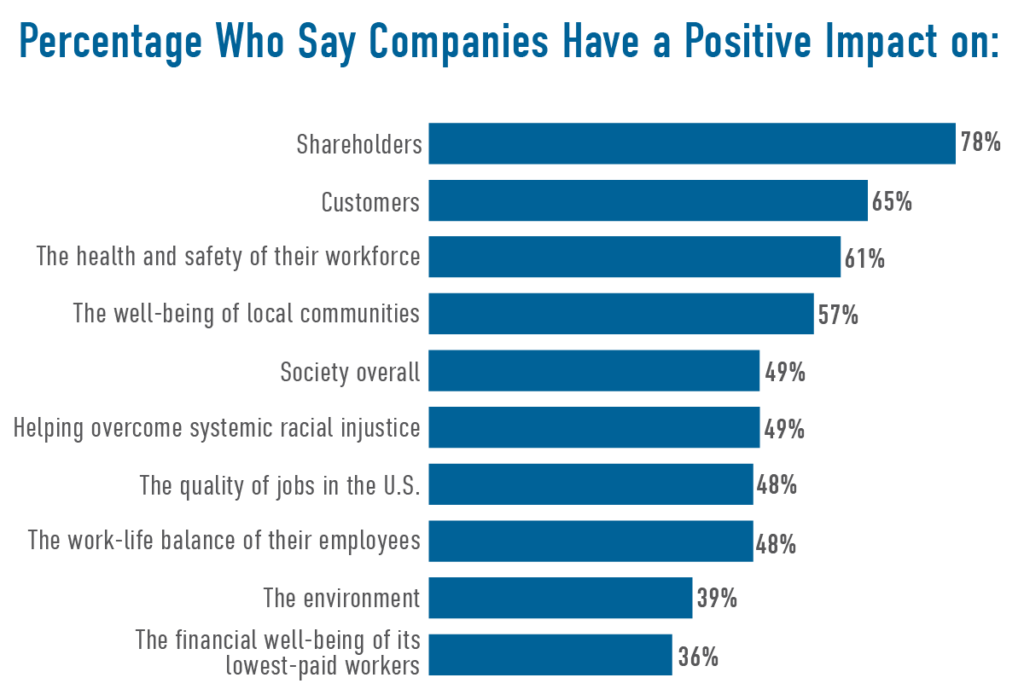 When we look at some of these measures over time, once again we see that the public’s perspective is that companies are moving in the wrong direction. For example, the percentage who say companies have a positive impact on society overall has fallen from a high of 58% in 2018 to just 49% of Americans in 2021. 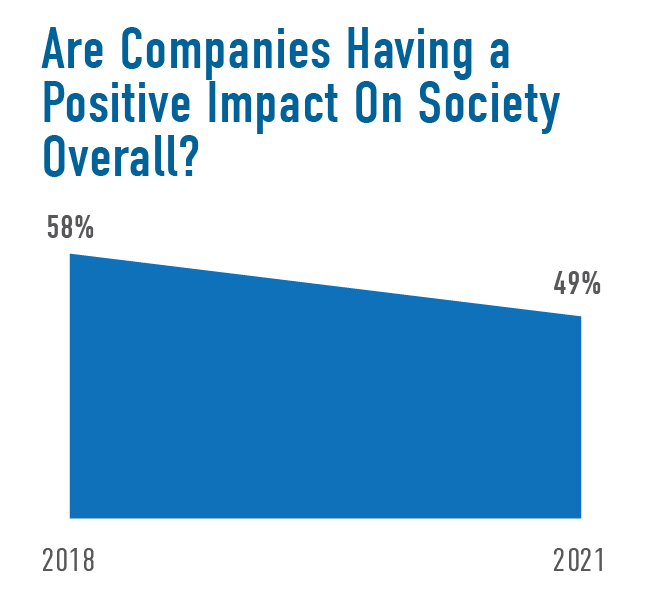 Compare those trends with the percentage of Americans who say companies are positively impacting their shareholders: This number has ticked upwards, from 72% in 2018 to 78% in 2021. 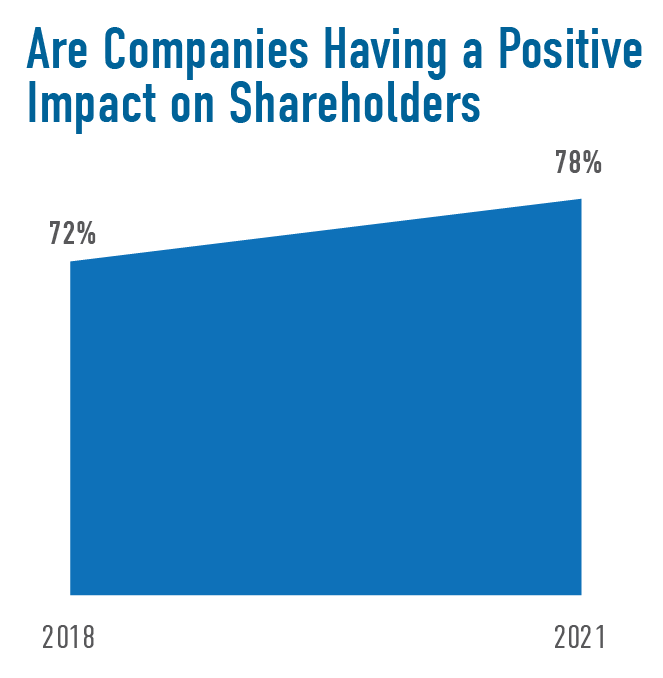 Workers Are Being Left Behind

Another question asks for the public’s thoughts about which stakeholder – shareholders, customers, or workers – is the top priority for companies. For each of the last five years and by a significant but varied margin, Americans have said shareholders. Although the percentage had been trending downward, in 2021 that dip has reversed yet again, with just about half (51%) saying shareholders are a company’s top priority. At the same time, the percentage of those who said workers were a company’s top priority – which had reached a high of 37% in 2020 – has fallen to 30% in 2021. 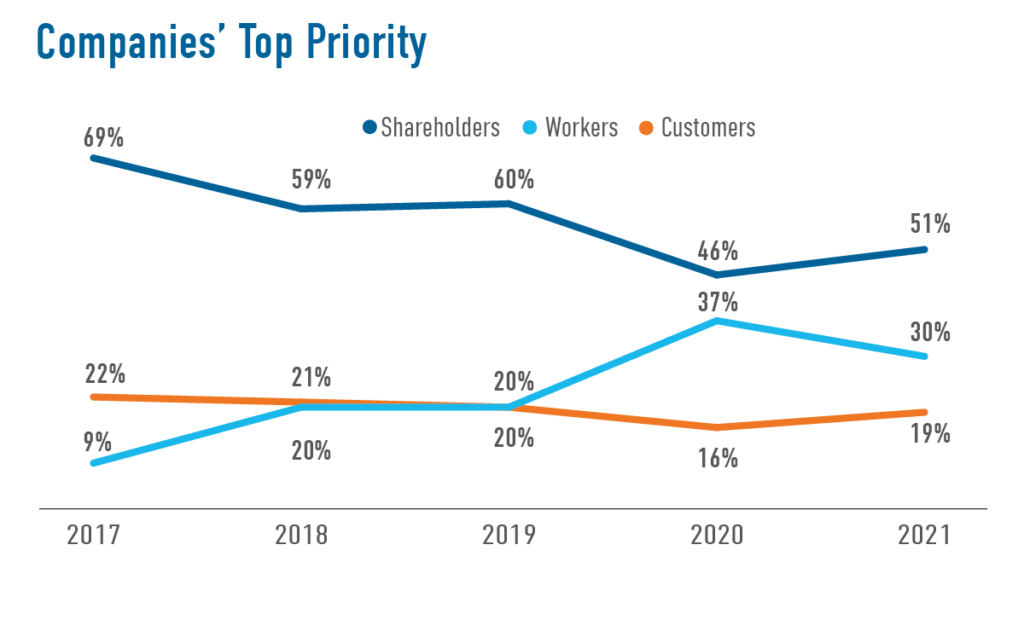 The data reflect that Americans continue to believe that workers are being left behind. Low wages, poor benefits, and the continued strain of health concerns during the pandemic have made working conditions next to impossible for America’s frontline workers, and the public is taking notice. Particularly when the media is paying close attention to the groundswell of workers who, feeling more empowered than ever to fight for better treatment from their employers, are striking, walking-out, or simply resigning. 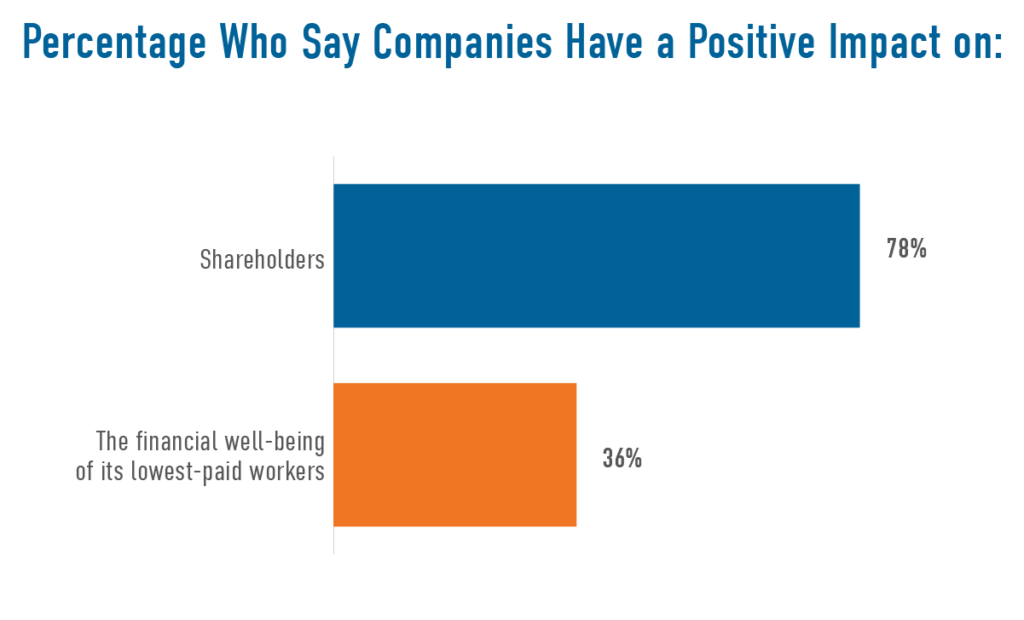 Despite the increasing skepticism we see from the American public, respondents also believe that change is possible – that corporate leaders have a key role to play in addressing the most critical issues of our time and that they’ve done right by their stakeholders through the COVID-19 pandemic and moving through our nation’s reckoning with racial injustice.

The public has consistently maintained that corporate leadership is the driving force behind just business behavior. Although the numbers may vary slightly year over year, the proportion is relatively stable over time: a majority of Americans (63%) believe CEOs of large companies have a responsibility to take a stand on important societal issues.

When we look at views on business across demographic disaggregates, we see a lot of consistency between different groups. CEOs taking a stand on societal issues, however, is one case in which Americans don’t necessarily see eye to eye. Americans who identify as liberal are almost two times as likely as conservatives to say CEOs have a responsibility to take a stand on societal issues (81% liberal vs. 42% conservative). 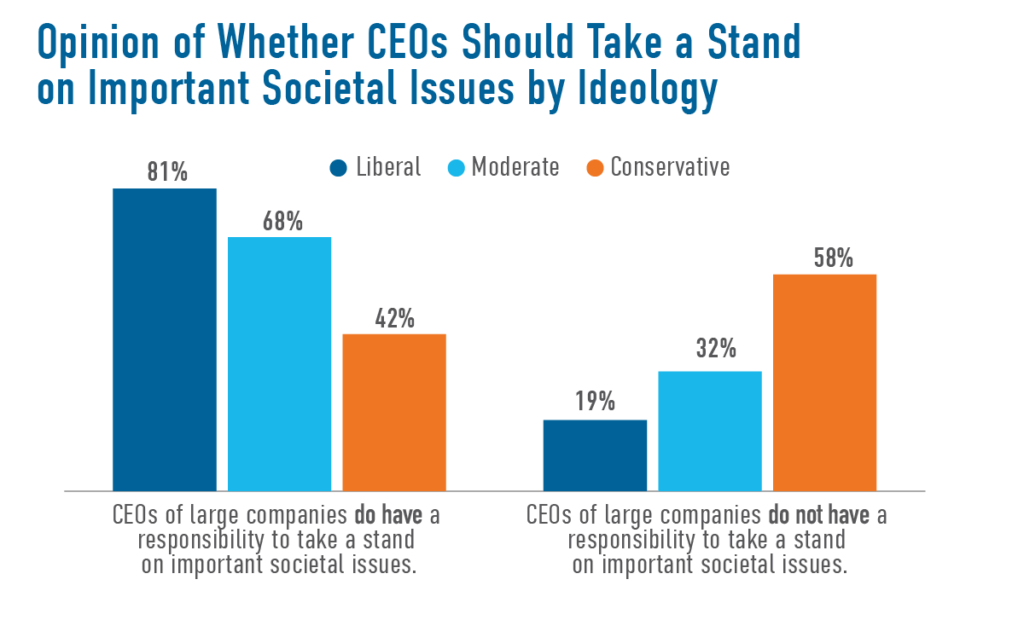 Of the almost two-thirds who say that CEOs have a responsibility to take a stand, 61% of that group says they should do so no matter the issue, and not necessarily focus on issues that directly impact their business. 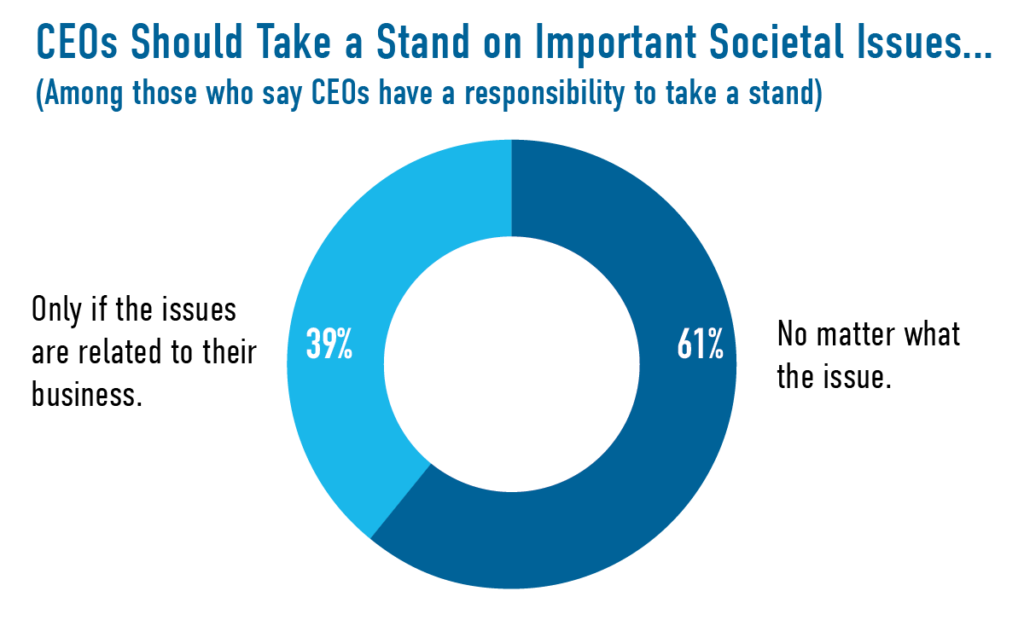 In 2021, we asked which societal issues CEOs should address. Among those who say CEOs should take a stand no matter what, 70% strongly agreed that leadership should address income inequality. The other most important issues were racial equity (64%) and climate change (56%). 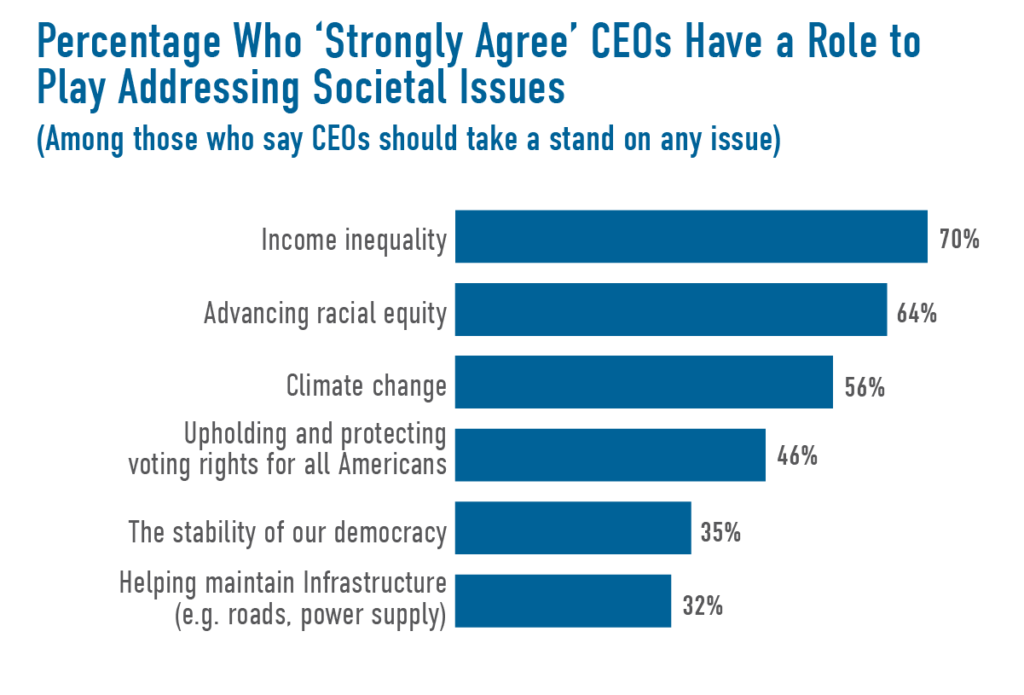 Business Can Be a Force For Change, Powered by the People

When asked if business can be a positive force for change, a large majority (84%) agreed. Additionally, people believe that their own actions can shape the future: 86% of Americans say people can be effective when they act together to try to change companies’ behaviors, up 15 percentage points since we first asked this question in 2017. 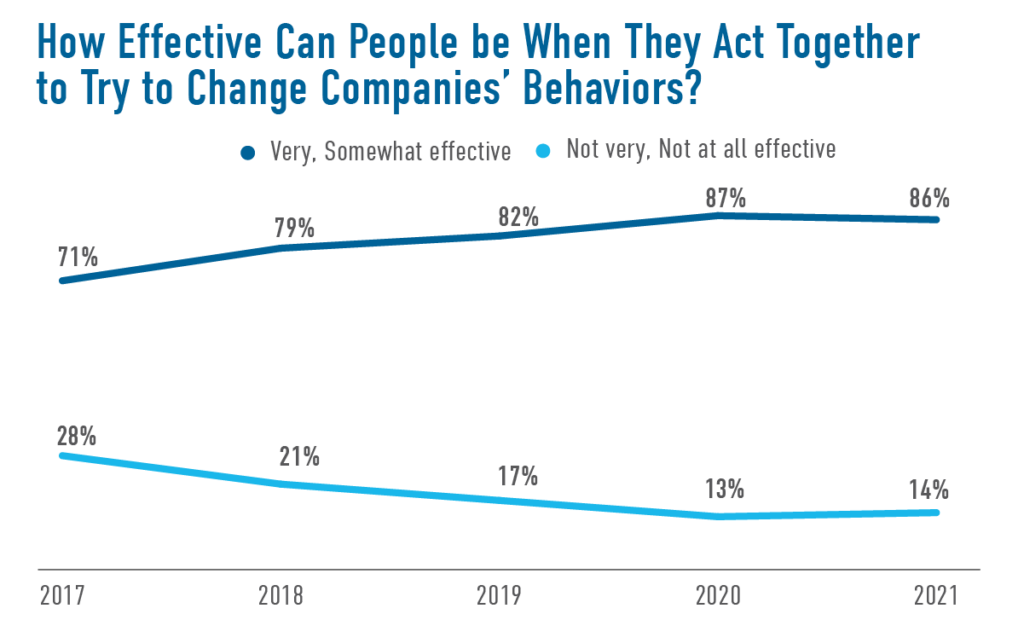 With regards to just business behavior, we found this year that two-thirds of Americans think most companies are very or somewhat just, up from 60% in 2019. 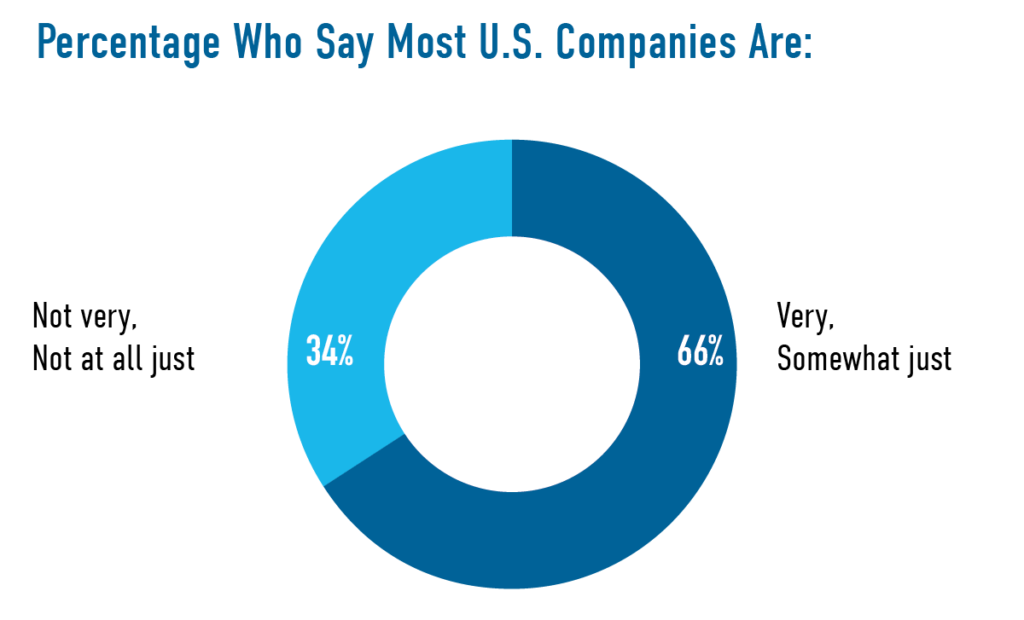 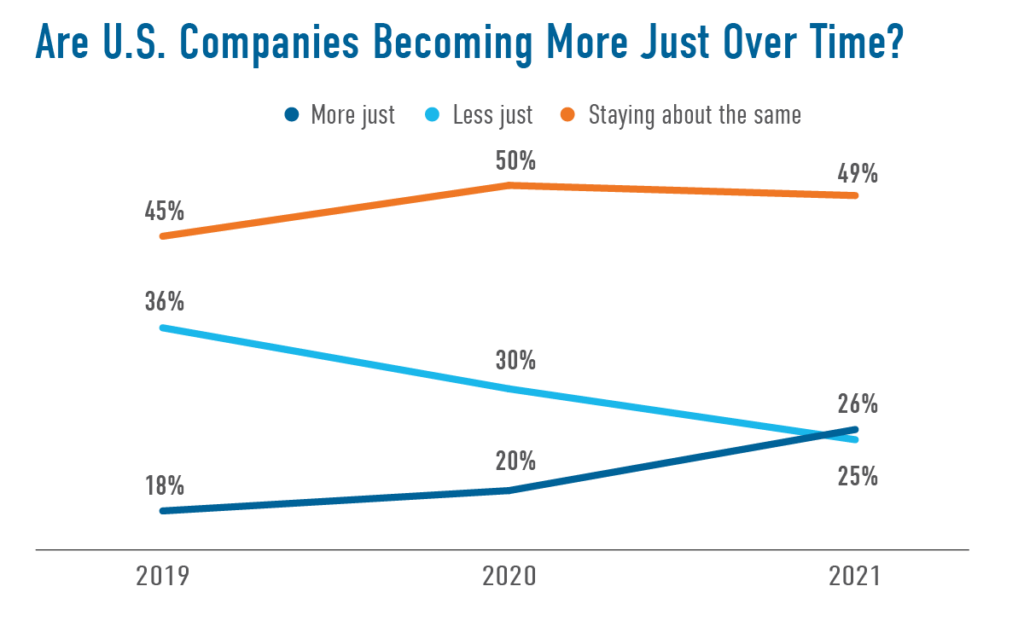 Leading Through the Challenges of Today

Positive assessments of corporate behavior are perhaps informed by the public’s views on how companies have weathered the events of the past two years. More than half (54%) say companies have shown leadership throughout the pandemic, up from 43% in 2020. 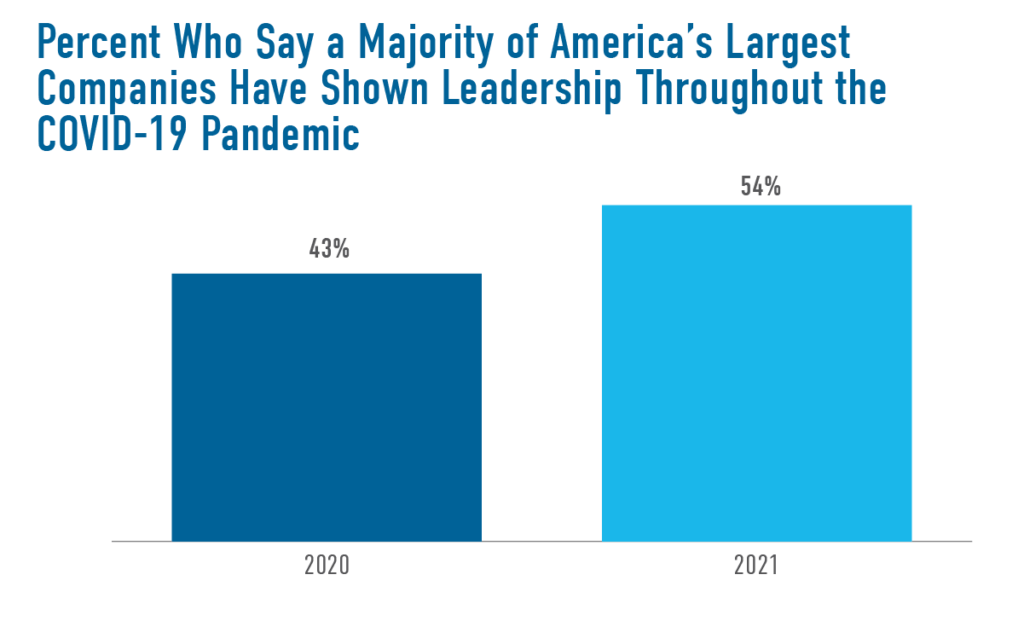 Assessments of company leadership making a commitment toward diversity, equity, and inclusion in the workplace over the past 12 months show similarly positive results, with 61% of Americans saying a majority of companies are making progress advancing DEI. 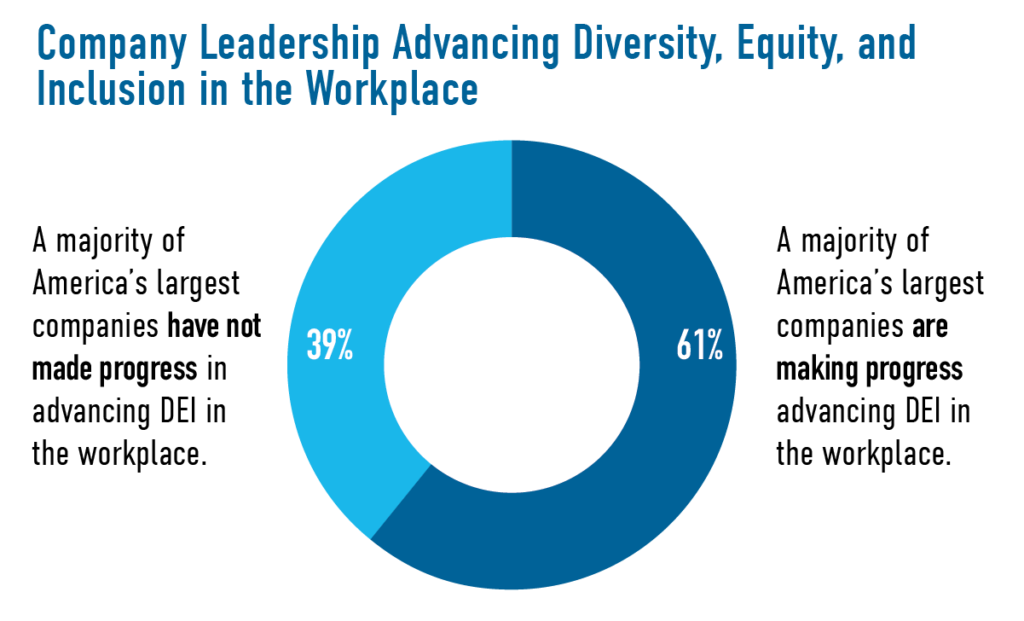 That Americans have strong opinions about large U.S. companies may be attributable to a significant and growing percentage of the public being informed about corporate activities and behavior (in 2021, 27% say they are Informed or Very Informed, up from 18% in 2020), undoubtedly due to an prodigious amount of media coverage on the topic throughout the pandemic. 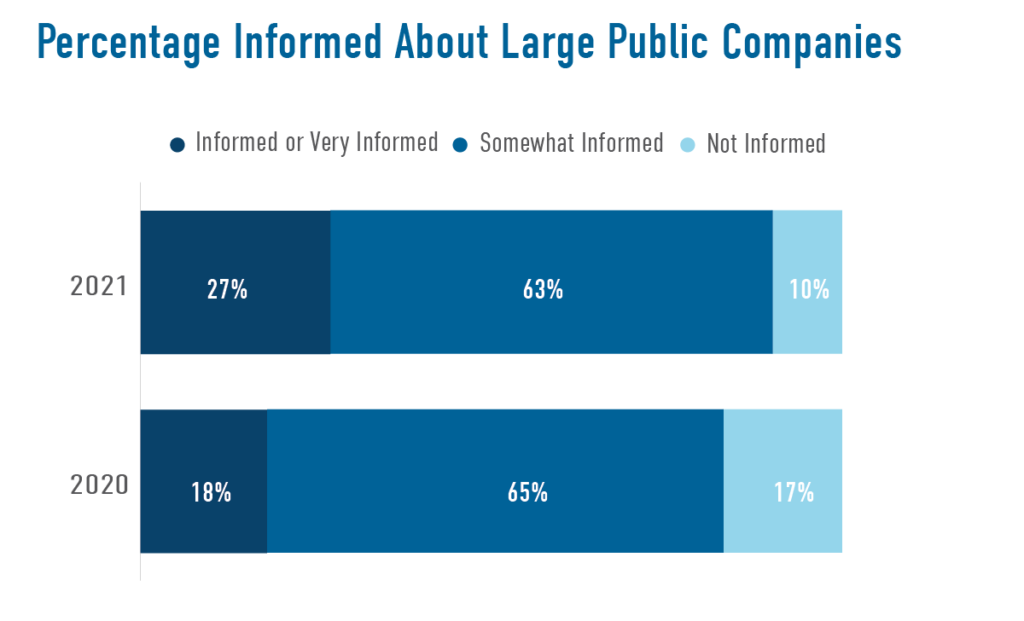 For all of corporate America’s positive momentum toward achieving a more just business model, this year’s survey data shows that leadership has more work to do in addressing the needs of all their stakeholders, particularly treatment of their lowest paid workers. Last year, almost nine in 10 Americans said the pandemic was “an opportunity for large companies to hit reset and focus on doing right by their workers, customers, communities, and the environment.” While Americans saw positive gains on some key metrics, there has been some backtracking from those gains in the past 12 months.

If progress is truly to be made toward a more just economy that serves the needs of every American, then corporations must continue to listen and respond to the issues that matter most. Toward that end, JUST Capital will be releasing in December the “The People’s Priorities” showcasing which Issues rose to the top in this year’s Annual Survey and the final Issue weights that will underpin our Rankings of America’s Most JUST Companies in 2022.

The Americans’ Views on Business survey was conducted in association with SSRS – an objective, non-partisan research institution that provides scientifically rigorous statistical surveys of the U.S. population. JUST and SSRS conducted the 20 question survey online with a probability-based sample between July 28 and August 10, 2021 among a general population sample of 3,000 English- and Spanish-speaking U.S. adults 18+ years of age, with an oversample of 507 Hispanic and 461 non-Hispanic Black respondents.

The margin of error is +/- 2% at the 95% confidence level. Results were weighted to U.S. Census parameters for age, gender, education, race/Hispanic ethnicity, and Census Division to ensure representativeness of the U.S. population. All margins of error include “design effects” to adjust for the effects of weighting.