The importance of paid sick leave became even more apparent when the coronavirus pandemic hit, but while businesses across the country remain open, fewer than half of companies in the retail sector have publicly announced a new or expanded paid sick leave policy for their frontline workers – many of whom already had limited access to policies that prioritized their health and well-being.

In a recent survey in partnership with The Harris Poll, we found that 74% of Americans believe that companies should prioritize providing at least 14 days of paid sick leave to all workers during COVID-19, and we’ve continued to track this critical issue throughout the pandemic. Access to paid sick leave not only protects workers against employment insecurity, it also reduces the urgency to come into work while sick. An Accountemps study conducted prior to the COVID-19 crisis, for example, found that nine out of 10 employees admit to reporting to work with flu-like symptoms, which, especially during a pandemic, could exacerbate the health hazards faced by frontline workers.

Among the most vulnerable industries is the retail sector, whose employees find themselves at the frontlines of the pandemic. Researchers for the Harvard Kennedy School’s Shift Project found that nationwide, only 45% of retail workers are estimated to have access to any paid sick leave. Out of the 68 retailers* in JUST Capital’s COVID-19 Corporate Response Tracker – which tracks 300 of America’s largest public companies – only 27 (40%) disclose implementing a supplemental paid sick leave policy in response to the coronavirus pandemic. As of June 9, the largest retailers in America offered an average of 13 days of paid sick leave, which falls short of the 14-day quarantine recommendation by the Centers for Disease Control and Prevention. Home Depot stands out among its industry peers as the retailer with the maximum amount of leave – a generous 24 days, which far exceeds the CDC guidelines. 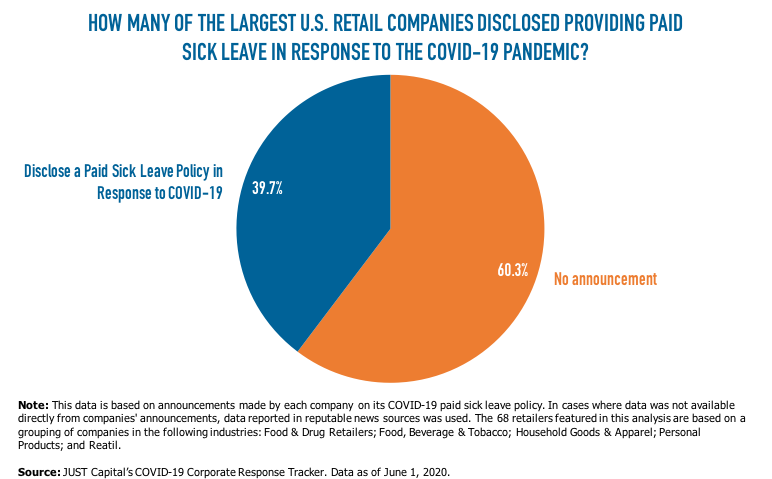 Many companies – like Home Depot – have stepped up to provide this critical protection, but more is urgently needed from corporate leaders, thanks to the lack of federal and state policies and mandates. The United States is one of only three among 22 countries with advanced economies that does not mandate paid sick leave for employees with the flu, which necessitated the introduction of emergency worker protections at the onset of the coronavirus crisis. The legislation included a temporary paid sick leave requirement but exempted companies with 500 or more employees, making many frontline workers reliant on their employers to provide the needed protections.

This lack of a nationwide paid sick leave policy has become increasingly problematic in light of the coronavirus outbreak, which requires quarantine and isolation to contain the spread of the virus. Even though some states and localities have taken it upon themselves to offer employee protection by compelling employers to provide paid sick leave, the majority have not. To date, only 14 states (Arizona, California, Connecticut, Maryland, Massachusetts, Michigan, Nevada, New Jersey, Oregon, Rhode Island, Vermont, and Washington, as well as Colorado and Maine starting next year) and the District of Columbia have paid sick leave laws, putting the responsibility on companies to protect employee’s health and safety.

As businesses continue to reopen and COVID-19 cases rise in parts of the country, it is critical for retail companies to provide paid sick leave to their employees. And although businesses have moved past the initial response phase of the pandemic, 70% of the Americans we’ve surveyed believe that companies should continue to offer at least 14 days of paid sick leave to all employees for at least another year, which signals that Americans are putting workers issues at the forefront of the economic reset.

The pandemic has certainly altered the public perception of acceptable corporate behavior, which is why companies must continue doing right by their employees even beyond this crisis. One way that retailers, whose workers interact with customers every day, can do so is an action the public strongly supports: by instituting permanent paid sick leave policies.

*Note: The 68 retailers featured in this analysis are based on a grouping of companies in the following industries: Food & Drug Retailers; Food, Beverage & Tobacco; Household Goods & Apparel; Personal Products; and Retail.

Aleksandra Radeva is a JUST Capital Research Assistant, focusing on workers and wages, as well as ESG data collection.

Paid Sick Leave Was Not a Corporate Priority Before Coronavirus – Americans Want That to Change.