Events over the last year have tested the country’s frayed social fabric like no other year in recent memory. Growing partisan polarization has been well-documented, and partisan antipathy has intensified to a point where 91% of Americans say that they see strong conflicts between Democrats and Republicans. Everything, from the COVID-19 pandemic to presidential approval ratings, shows widening gaps in attitudes between Americans of different political views. It seems that the only thing that the American public – across all ideological factions  – can agree on is that Democrats and Republicans disagree on even basic facts.

Our annual survey, however, has captured a common ground among liberal and conservative respondents when it comes to their views on stakeholder capitalism, with large majorities of each group agreeing that it’s important for companies to promote an economy that serves all Americans, as well as one that builds an economy that allows each person to succeed through hard work and creativity and to lead a life of meaning and dignity. And both groups largely agree that business can be a force for positive societal change (88% of liberals and 74% of conservatives). 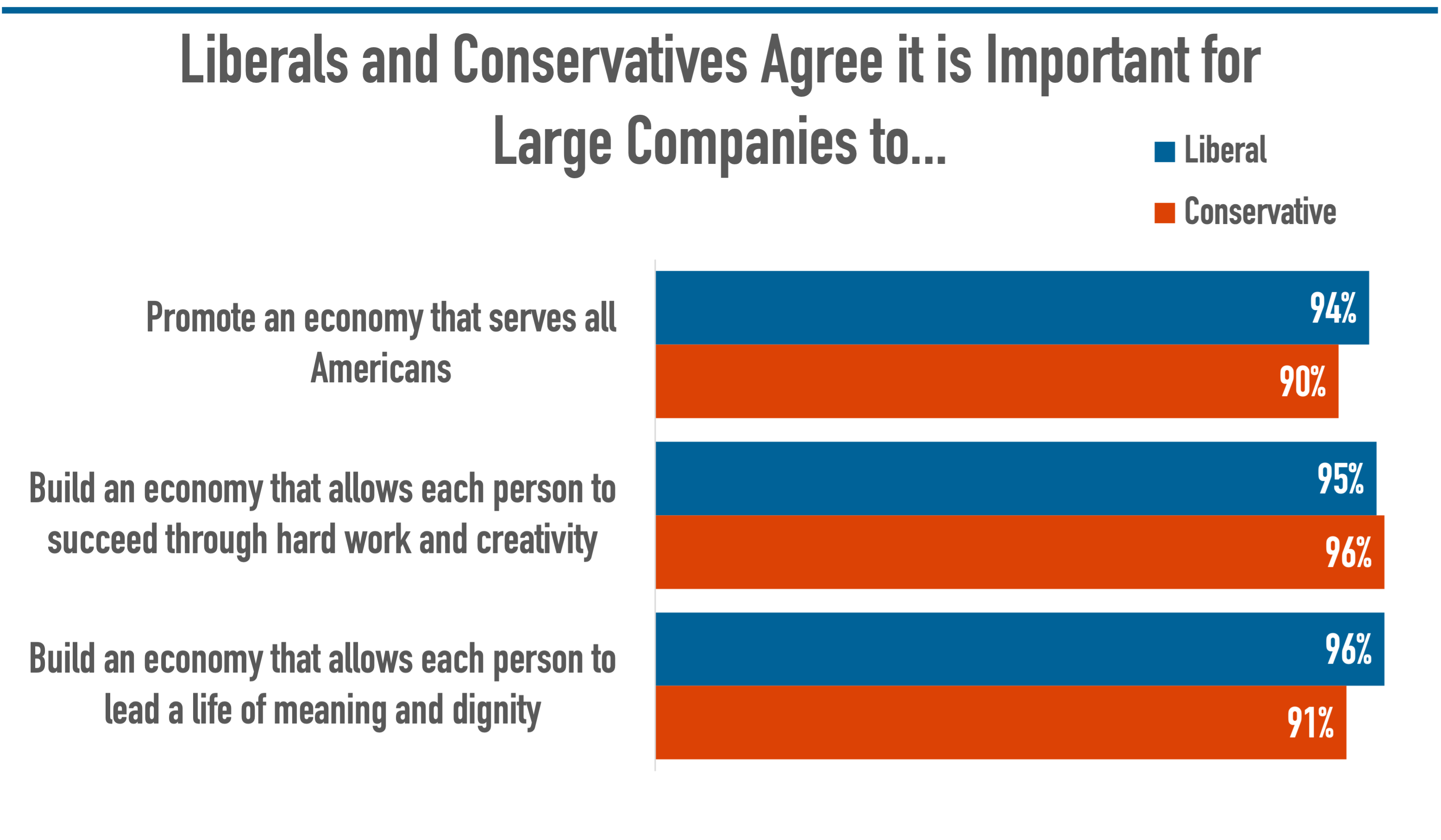 Across ideological divides, Americans also agree on what the top eight priorities for creating this vision of stakeholder capitalism should be – among them, paying a living wage, cultivating an inclusive workplace, and protecting workplace health and safety. This alignment signals that stakeholder capitalism may represent a broad-based solution for achieving a more equitable economy that all Americans, regardless of their ideological perspectives, can get behind – in particular, when it comes to how companies treat their workers.

Overall, Americans want to see companies pay a fair, livable wage to their workers – it is the top priority for conservatives and #2 for liberals (securing human rights across the supply chain is the top priority for liberals). Ethical leadership ranks #4 for both groups on the list of priorities. And among the top eight priorities overall, liberals put slightly more emphasis on issues of human rights and workplace diversity compared to conservatives, while conservatives put slightly more emphasis on job creation and workforce investment compared to liberals. 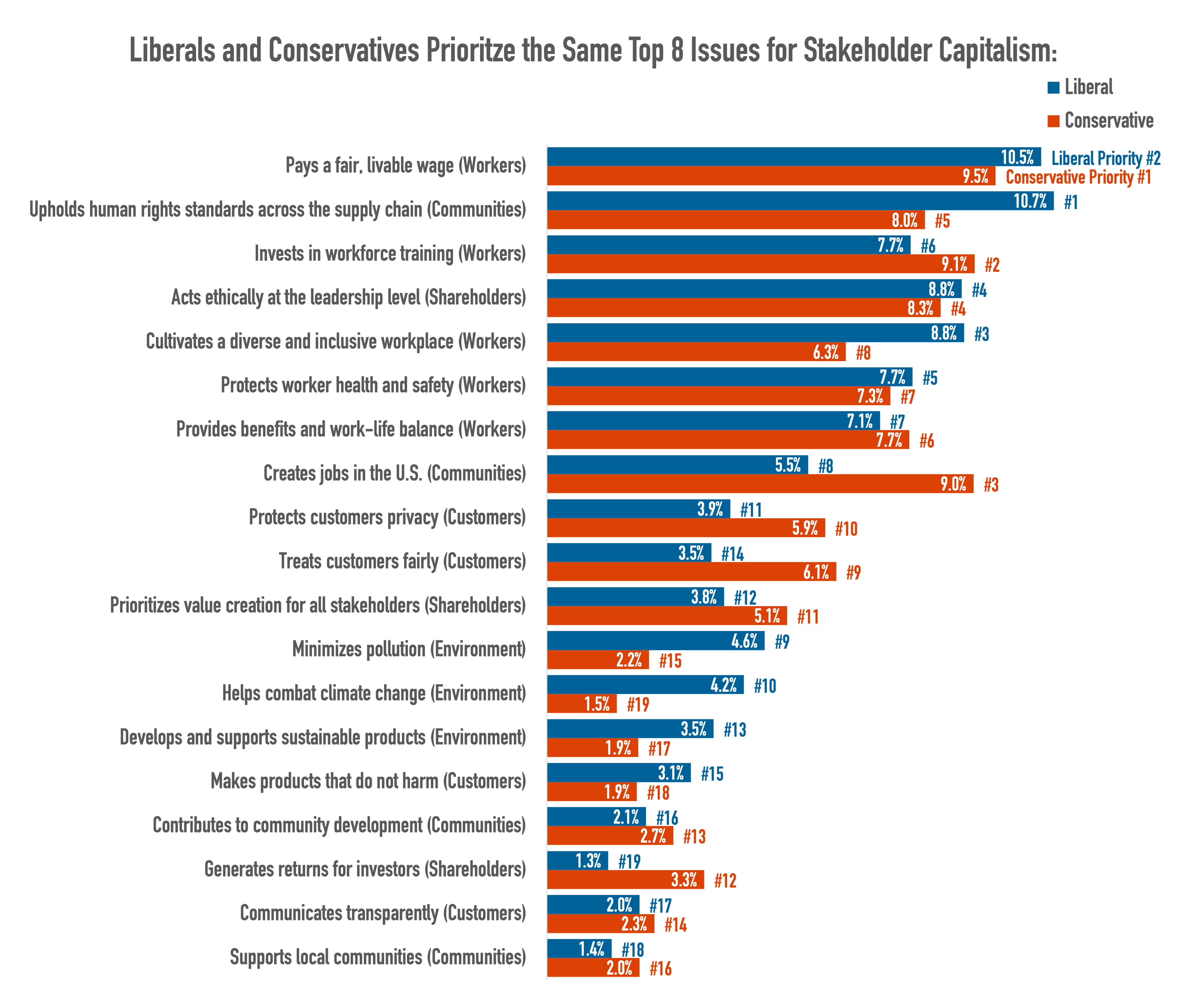 Liberals and conservatives also largely align on the business behaviors that they view as unjust. Large majorities of both groups believe it is unjust for corporations to hide product safety issues from the public, put workers at risk by not providing adequate health and safety measures, do business with companies that have abusive working conditions, and continue providing high pay to CEOs while laying off workers. The only issue that presented a split in opinion about unjust corporate behavior is greenhouse gas emissions – 68% of liberals believe corporations that produce more greenhouse gas emissions are unjust, compared to 35% of conservatives. 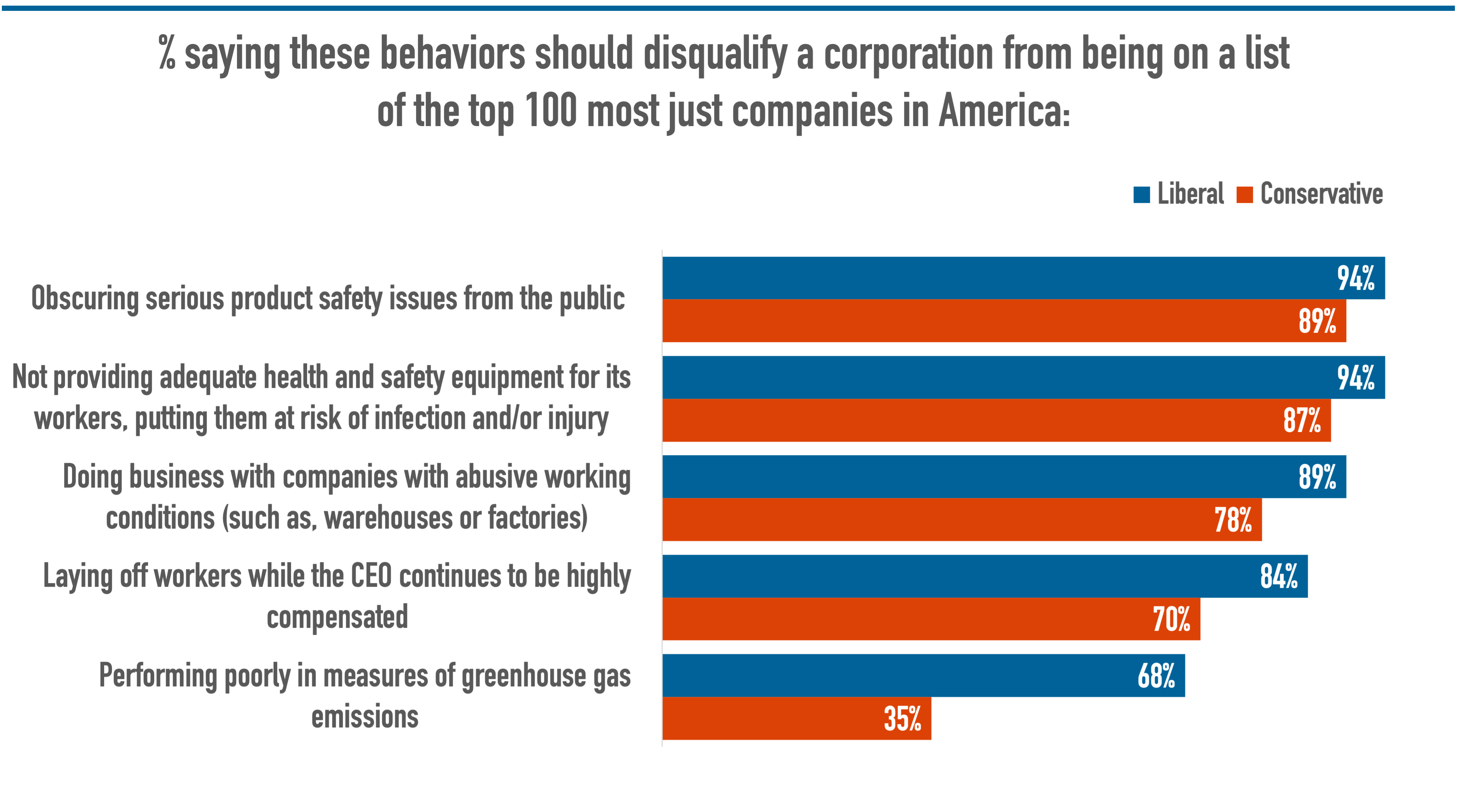 Despite the intense polarization that undeniably exists in our country today, a path toward unity seems to exist in how we approach stakeholder capitalism. Business leaders can do their part by putting forward a broader, more inclusive economic vision that allows all people to contribute and achieve their potential. And companies can take action by making the security and well-being of their workers their top priority – a move that truly bridges the ideological divide.