Recent analysis from the Congressional Research Service showed that the Tax Cut and Jobs Act – which originally aimed to raise wages and add jobs – did not improve worker pay. Instead, according to the report:

“Much of these funds, the data indicate, has been used for a record-breaking amount of stock buybacks, with $1 trillion announced by the end of 2018.”

For comparison, about $4.4 billion is estimated to have gone toward worker bonuses, which comes out to about $28 per person, and about 2% of the overall estimated windfall.

This is consistent with the findings of our Rankings on Corporate Tax Reform – an ongoing analysis that to date has evaluated how 145 of the largest, publicly traded U.S. companies reinvested their savings from the TCJA. 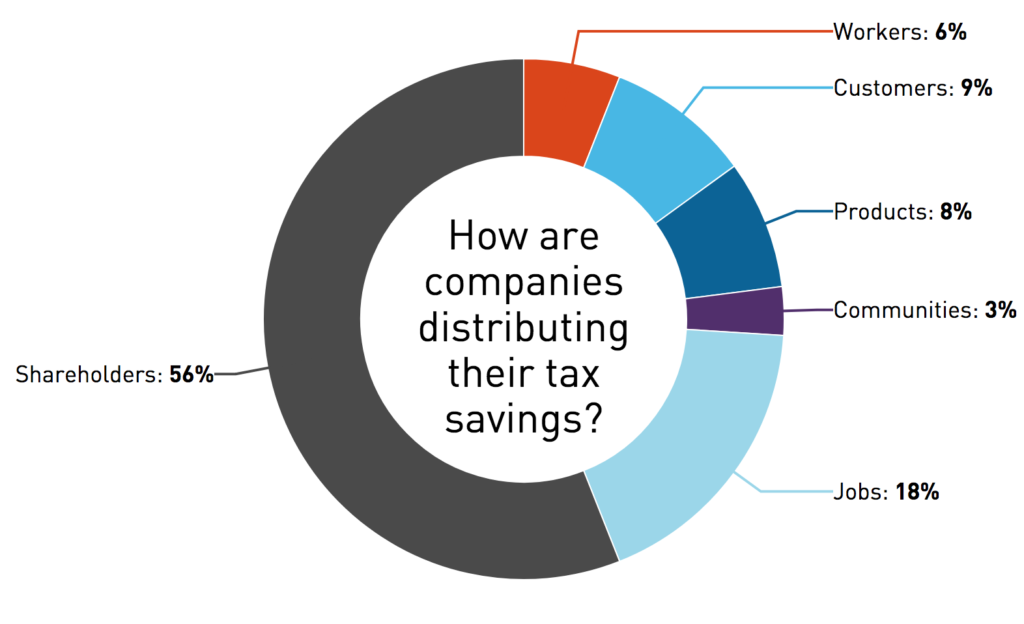 We estimated that 56% of tax savings were headed toward shareholders in the form of stock buybacks or direct distributions, while just 6% directly benefited workers, with more than half of that in the form of one-time bonuses instead of permanent raises or benefits. This is in direct opposition to what the American public told us when we asked them how they thought companies should allocate their tax windfall – with respondents agreeing that 24% of savings should go toward workers and just 10% toward shareholders.

Through this work, we aim not only to shine a light on how key stakeholders are affected by this legislation, but to incentivize more just and equitable action from companies. Before we can create a more just form of capitalism, corporate America must work to better align its actions with the priorities of the public – and how it spends its tax savings is an essential step toward doing just that.