Ever since last year’s reckoning with racial injustice, corporate America has stated that diversity, equity, and inclusion (DEI) is a business imperative. While the overwhelming majority of companies in JUST Capital’s Corporate Racial Equity Tracker disclose having policies aimed at providing equal opportunities and creating workplaces free of discrimination and harassment, few are transparent around the active measures they take to advance their commitments, including conducting racial pay equity analyses.

Over the last 50 years, the gaps between upper-income and low- and middle-income earners have been growing in the United States. At the same time, persistent wage gaps – or the difference in earnings – between racial and ethnic groups further exacerbate inequities in income and economic security for certain communities of color.

According to the Economic Policy Institute, in 2019, the typical (or median) Black and Hispanic worker earned median wages of $0.76 and $0.75, respectively, for every $1.00 earned by the typical white worker. What’s more, women of color, particularly Black and Hispanic or Latina women, face the most significant wage gaps compared to white men – earning $0.62 and $0.54 to every $1.00 earned by their white, male colleagues.

Even for college-educated Black Americans, pay inequity has gotten worse. Earning a college degree has also not led to equal pay for Hispanics, and Hispanic women continue to face significant pay gaps compared to white men. And despite general productivity growth, Black and white wage gaps have grown in the last few decades. The economy cannot reach its potential when continued labor market discrimination and resulting wage inequities leave so many Black and brown Americans trapped in vicious cycles that prevent their thriving for generations.

Corporate America has an opportunity and a responsibility to end these inequitable cycles. It begins with performing an audit to identify where racial wage gaps exist, then being transparent to help drive accountability, and finally doing the work to close the gaps.

In a recent public opinion survey, conducted with The Harris Poll on what Americans believe companies should do to advance racial equity, we found that 85% of Americans overall and 91% of Black American respondents believe it is important for companies to conduct annual pay analyses across different demographic groups to ensure equal pay for equal work. And we’ve seen demand among key corporate stakeholders for disclosure on this issue – with investors putting increased pressure on companies to report on racial pay equity audits and Glassdoor recently releasing a tool for prospective employees to learn employee-provided salary reports broken out by demographic groups.

When it comes to how companies have responded to this critical issue, data from our Tracker shows that, of the 100 largest U.S. employers in the Russell 1000, only 31% report conducting a race and ethnicity pay equity analysis. 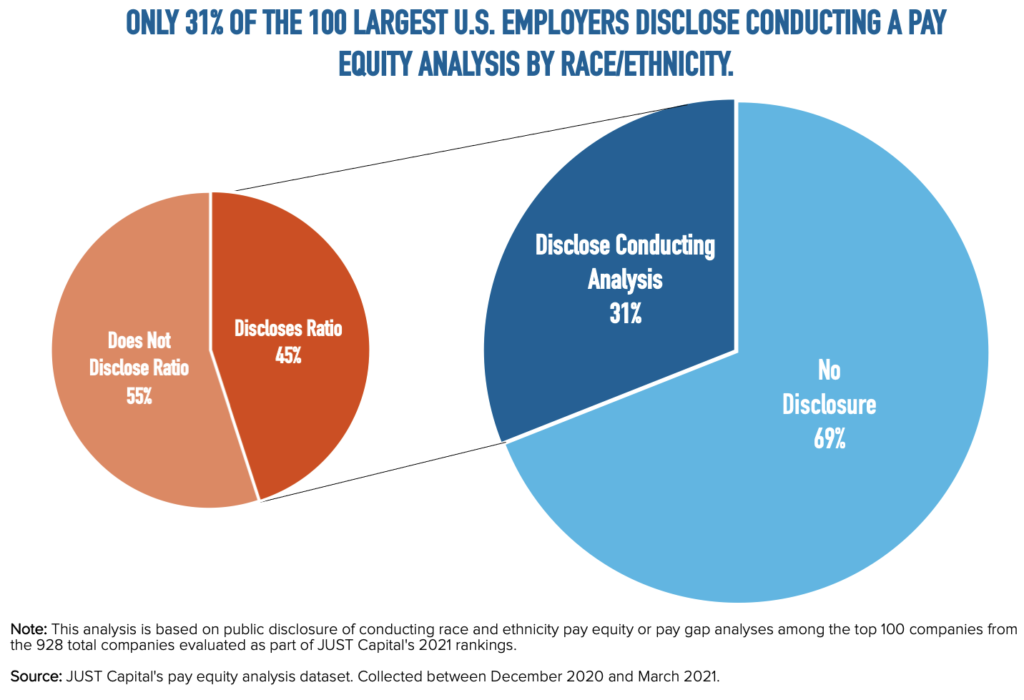 Not many disclose results, but those that do have achieved parity or close to it.

Of the 31 companies that disclosed conducting a pay equity analysis, 14 (or 45% of the 31 companies disclosing conducting a racial pay gap analysis) reported their adjusted or unadjusted non-white-to-white pay ratios from these analyses. It is illuminating when companies disclose this ratio because it provides a more granular level of insight to how different employees in the same or similar roles are paid in relation to one another. Among those that disclosed, the average race and ethnicity pay equity ratio is $0.993, with 12 of these 14 companies disclosing results on an annual basis.

It is important to consider that even a seemingly minor pay gap of a couple of cents (e.g. $0.97 to $1.00) can become substantial when calculated annually. As PayScale highlighted in its compensation survey research on the adjusted racial wage gap, when “Black women earn $0.97 for every dollar earned by a white man with the same job and qualifications,” this can lead to a pay gap of $2,200 over the course of a year and hundreds of thousands of dollars over the course of a career. For pay gaps beyond a few cents, the impact is clearly more detrimental and this may be why we see minimal disclosure on adjusted, and even less, unadjusted pay ratios. The chart below shows the distribution of companies disclosing their adjusted pay gap, with all companies reporting a ratio range of $0.99 to $1.00:

As we can see from the companies that disclosed their adjusted pay ratios in the above chart, each reports a ratio of above $0.99. It is important to note that there is one company among the 14 that disclose a pay gap or ratio of any kind that reported only an unadjusted value, which has been excluded from the chart because it is not comparable to the other adjusted values. Similar to our findings, Arjuna Capital reports that companies prefer to share their adjusted pay gaps because “the gaps are smaller and easier to remedy.” By contrast, unadjusted pay gaps are often larger because they account for comparative number of white employees in higher paying positions to non-white employees. Unadjusted pay gaps can reveal if employees of color are underrepresented in higher paying positions and provoke conversations about equity in opportunity and career advancement for people of color.

The most transparent companies are also the most proactive.

Several companies that do disclose results should be highlighted for their pay transparency as well as the actions they take to prevent pay gaps from occurring. These best practices can provide an example for other companies to follow that have yet to make this information public.

Apple, which disclosed its adjusted pay ratio at 1-to-1, announced that the company does not ask for salary history during the recruiting process, reducing the chance of unfairly underpaying candidates and advancing company efforts to promote pay equity among female and minority employees.

Microsoft conducted a detailed analysis that broke down its race and ethnicity pay equity ratio even further, reporting on the adjusted pay gaps for Black and African American employees, Hispanic and Latinx employees, and Asian employees. This level of detail more precisely indicates where remaining gaps exist, which can lead to a more focused response in closing them.

In 2019, Starbucks reached its goal of 100% pay equity by both race and gender. According to its “Principles to Pay Equity,” Starbucks is determined to maintain this pay equity ratio. The Principles are organized in three main pillars that the company considers essential to pay equity: Equal Footing in the hiring process (e.g. providing position pay ranges upon a candidate’s request), Transparency (e.g. publishing pay equity progress annually), and Accountability (e.g. analyzing compensation decisions before they are final). There are several additional best practices listed under each pillar, and all of these actions from Starbucks can set an example for companies that have yet to build out their own approaches to pay equity. Starbucks is also one of the few companies in the top 100 employers to release its unadjusted pay gap information in addition to pay gaps adjusted for similarities between workers.

Conducting, reporting on, and resolving pay equity issues is critical to addressing acute disparities between racial and ethnic groups in our nation today. It is equally important to consider the many other barriers to economic security that Black and brown workers face. The Center for American Progress found that in the decade since the 2007-2008 financial crisis (which wiped out 48% of Black wealth), the wealth gap between Black and white Americans grew even as the economy recovered. Additionally, research into the current demographic makeup of many U.S. companies shows that the percentage of non-white employees becomes disportionately smaller the higher up the ladder you go. If people of color are overrepresented in the lowest-paid work, the issue of a living wage becomes inextricably linked to race. Paying a living wage is paramount for ensuring if not equity, then dignity, for workers in these lower-paying jobs. To promote racial equity, companies need to take meaningful steps to advance people of color into stable, higher-paying positions as well as to tackle their racial pay gaps. (For additional information on how to assess your workers’ financial wellness, learn about our Worker Financial Wellness Initiative with PayPal, Financial Health Network, and Good Jobs Institute.)

You can explore which of the 100 companies we track have these three policies in the “Analysis by Race/Ethnicity” drill-down section of the Corporate Racial Equity Tracker below. For more information on our Tracker and racial equity work, please contact Yusuf George.