Our most recent survey of the American public, fielded in collaboration with our partners at The Harris Poll, revisits how Americans expect companies to prioritize diversity, equity, and inclusion efforts – and specifically, what concrete actions corporate leaders can prioritize to ensure a movement toward greater racial equity.

The upshot: Americans continue to say that companies have a role in promoting equity both in the workplace and more broadly in society by instituting various corporate diversity, equity, and inclusion policies and practices. The events of the past year have moved the public toward the belief that companies have the opportunity — and the responsibility – to shift societal norms around racial equity, defined by our program partner PolicyLink as “just and fair inclusion into a society in which all people can participate, prosper, and reach their full potential.”

Americans agree that companies should advance racial diversity and equity.

In this most recent poll, a vast majority of respondents – even across demographic and party lines – say it’s important for companies to promote racial diversity and equity in the workplace. That number skyrockets to near universal agreement among Black Americans (95%). 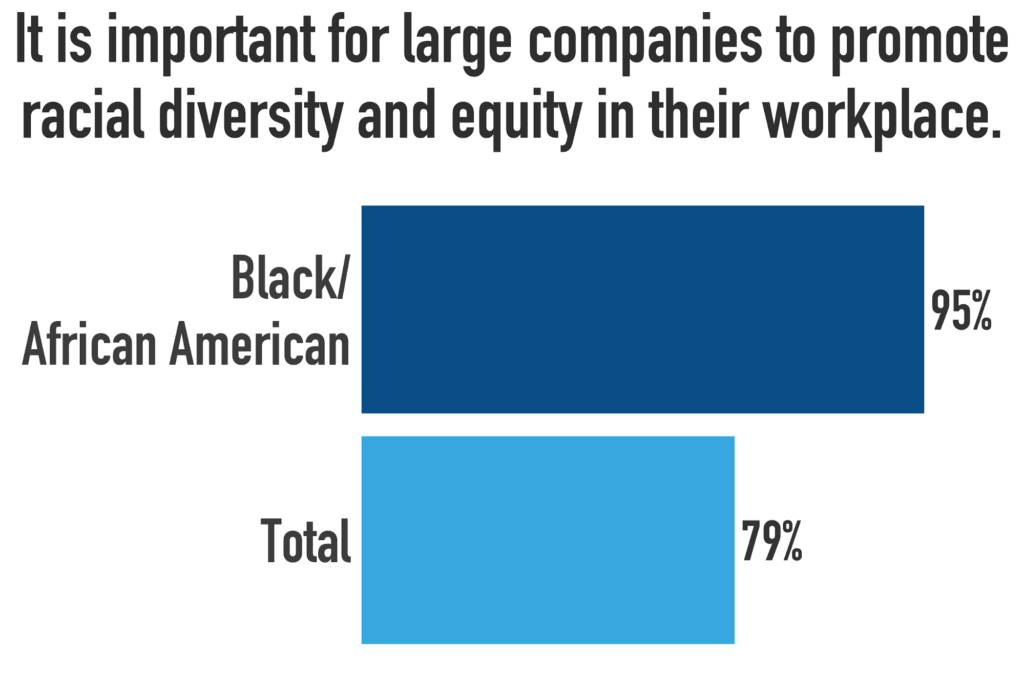 However, Americans agree that more work needs to be done.

Two-thirds of respondents say that large companies have more work to do with regard to achieving racial equity specifically in the workplace but also more broadly across American society. Among Black Americans, those percentages rise to over 80%, specifically:

In February 2021, JUST Capital held focus groups in which we explored myriad topics regarding just business behavior. We heard consistently in these focus groups – and from Black Americans, in particular – that they agree that companies should undertake tangible action to advance racial equity across all of their domains of influence: inside companies, within communities in which they operate, and at the broader societal level. For instance, one respondent was impressed with Ben & Jerry’s action plan to dismantle systemic racism and support Black Lives Matter.

“They had like a seven step plan that they gave you exact things that they were going to do to support, not just Black Lives Matter for now, while this is going on. But these are things that we can vote on and do. And giving information about ways for different legislations to be pushed forward, where they were going to put their money, specific names of things you should vote on that are going to help about police brutality…I think that is a just company just saying, ‘I know we’re going to get some pushback from this, but in this community, this is an important thing right now. We’re not just going to put a banner on the ice cream. We’re going to talk about these issues and keep this on the front page.’” – Black American woman in her 30s

Companies advancing racial equity will be rewarded with greater profitability.

Half of respondents (51%) say that promoting racial and ethnic diversity, equity, and inclusion in the workplace will ultimately have a positive effect on a company’s profitability. We see even greater profitability optimism among Black Americans (61%) and Democrats (68%).

Paying workers a living wage is a key step to achieving equity.

Much like we saw from our June 2020 poll, strong majorities agree that true racial equity in the workplace cannot be achieved without all workers being paid a living wage – 82% among Black Americans, 76% total, and even 66% among Republicans – demonstrating that there is a strong connection between racial and economic justice.

Americans agree key policies and practices are critical to moving the needle.

To advance racial equity in the workplace, a majority of Americans show strong, universal agreement (73% or more) on the importance of instituting a range of corporate diversity, equity, and inclusion policies and actions. In particular:

While support for diversity and equity policies is strong across demographics, there is significantly more support for actionable policies among Black/African Americans. For instance the top two issues included:

Across demographics, the two most important actions included:

While Americans continue to emphasize the importance of taking meaningful action to advance racial equity in the workplace, corporate America still has a long way to go. Though demographic disclosure is a key first step toward building a more diverse, equitable workplace, fewer than one-third of America’s largest companies have released some kind of workforce diversity data, and just 6.4% disclose detailed intersectional data that demonstrate workforce composition by both gender and race/ethnicity.

The insights from this latest survey effort – as well as the specific considerations we heard from our recent focus groups – show that the public continues to demand that corporate America instill values of equity and inclusion in the workplace. As discussed in our CEO Blueprint for Racial Equity, this is a defining moment for companies to redesign their “business-as-usual” practices and policies and showcase true leadership. In the coming weeks and months, we will exploring what tangible steps America’s largest companies are already taking to advance racial equity, and working to incentivize corporate leaders to build more inclusive workplaces and communities – that are truly aligned with the priorities of the public and their belief that creating this more equitable economy is not just necessary, but possible.

This survey was conducted online within the United States by The Harris Poll in partnership with JUST Capital from March 11–15, 2021 among 3,024 U.S. adults ages 18 and older. This online survey is not based on a probability sample and therefore no estimate of theoretical sampling error can be calculated. For complete survey methodology, including weighting variables and subgroup sample sizes, please contact Jennifer Tonti, Managing Director of Surveys & Polling [jtonti at justcapital.com]. 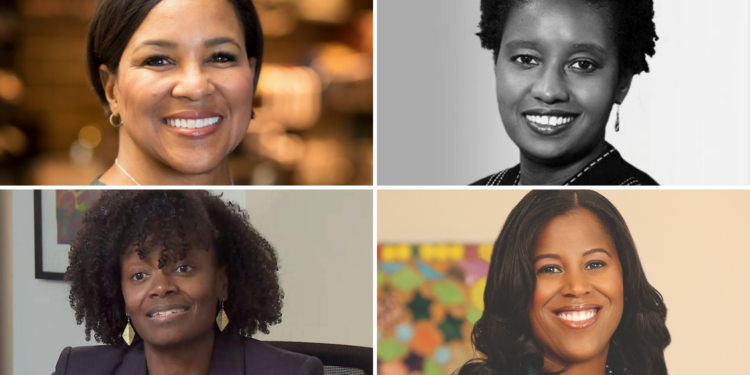 Black Americans Have Spoken: Corporations Must Maintain Racial Equity as a Priority and Continue Taking Action