In 2014, Pew Research Center released a fascinating study walking through 20 years of increasing political polarization in America. The study looked at a variety of indicators, including respondents’ perceptions of individuals from the different political parties, who they surrounded themselves with, and how their ideological perspectives (whether they were conservative, liberal, or moderate) lined up with their party affiliation. Results pointed to a shrinking cross-section of moderate voters, and a concomitant increase in more ‘Republican’ or ‘Democratic’ points of view. “In each party, the share with a highly negative view of the opposing party has more than doubled since 1994,” the report notes, citing increasingly antagonistic perceptions on both sides of the political divide.

With subsequent coverage in publications including the Huffington Post, New York Times, NBC, and elsewhere, the Pew study effectively highlighted what many people feel even more acutely today; that America’s political divisions are growing ever wider and more entrenched throughout society. The current media and political circus surrounding the presidential primaries naturally accentuates  –  some would say distorts – this, but even after accounting for this it seems that increasing social, economic and political polarization is accelerating.

Are we truly a nation divided? Or is there some middle ground lying just beneath the surface, obscured from view? For example, a different take on Pew’s research suggests that Americans are indeed more moderate than it may seem, and that party sorting does not imply that we are necessarily becoming more divided in our values.

Our own research supports the view that Americans have a lot more in common than meets the eye when it comes to the economy, and specifically our attitudes to business. Last year, JUST Capital surveyed over 40,000 Americans to find out what the country believes ‘just’ corporations are made of. Our results –  which reflect an accurate representation of the American population, across dimensions including income, gender, and ethnicity  –  suggest that attitudes to corporate behavior are remarkably similar across political lines: 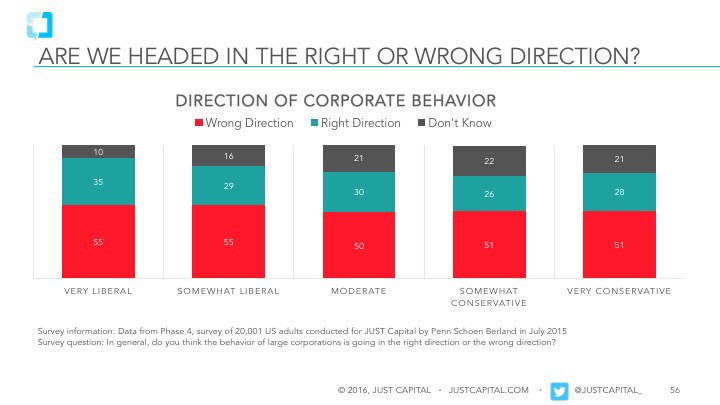 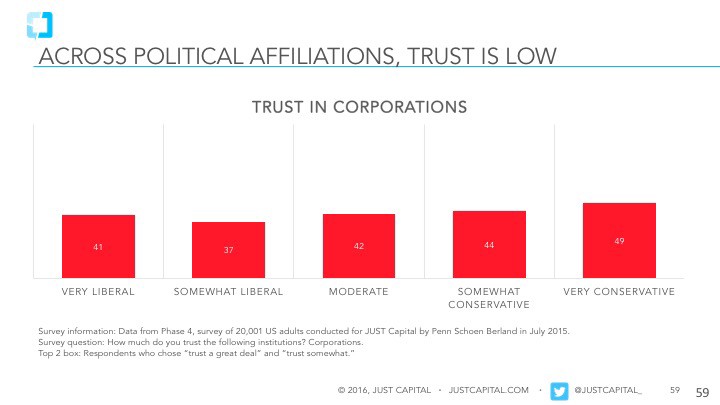 Substantial majorities (75% conservatives, 85% liberals) say that if they had such information, they would be more likely to buy from, work for, and invest in just corporations. 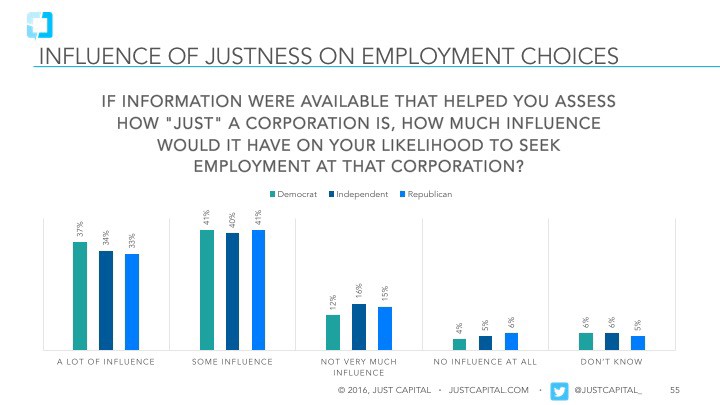 Although our survey exclusively focused on American opinions about corporate behavior, we think the results may also have broader implications about American identity. For example, regardless of ideological or political leanings, age, income level or geographic location, Americans view capitalism positively. They believe in business as a force for good. And they want to be treated fairly, and with respect. They also recognize that humanity cannot be stripped out of business activity and that progress and prosperity hinges upon access to opportunity for all.

There are clear signs that corporate America is beginning to hear this message. More corporations than ever are recognizing that just behavior cannot be isolated from core business activities. Although the prevailing winds of politics may be divisive, the momentum behind a more just and inclusive form of capitalism is building. As the walls dividing business culture and our personal sense of humanity slowly crumble, we believe that soon there will be no difference between a successful business and a JUST business.