As the UN Climate Change Conference – COP 25 – comes to a close this week, we’ve taken a look at the companies we rank that have taken the lead on mitigating climate risk in their operations – those that are walking the walk, in addition to talking the talk, around addressing the issues at the forefront of the conference.

In a session on December 2, House Speaker Nancy Pelosi announced that the U.S. is still part of the Paris Agreement, despite President Trump giving the UN formal notice of withdrawal from the pact in November. Despite the conflicting views and lack of executive leadership in Washington, private sectors are stepping up and have pledged to fill the gap, led by 2860 signatories in the We Are Still In coalition.

Of the 925 large-cap companies we rank, 69 are part of the coalition. These companies demonstrate mature climate risk management capabilities – including environmental policies, concrete, measurable targets, and disclosure of progress toward their goals.

Close to 40% of these 69 companies ranked in the top 100 for the Environment this year, based on their efforts to protect the environment, minimize pollution, and make efficient use of resources. 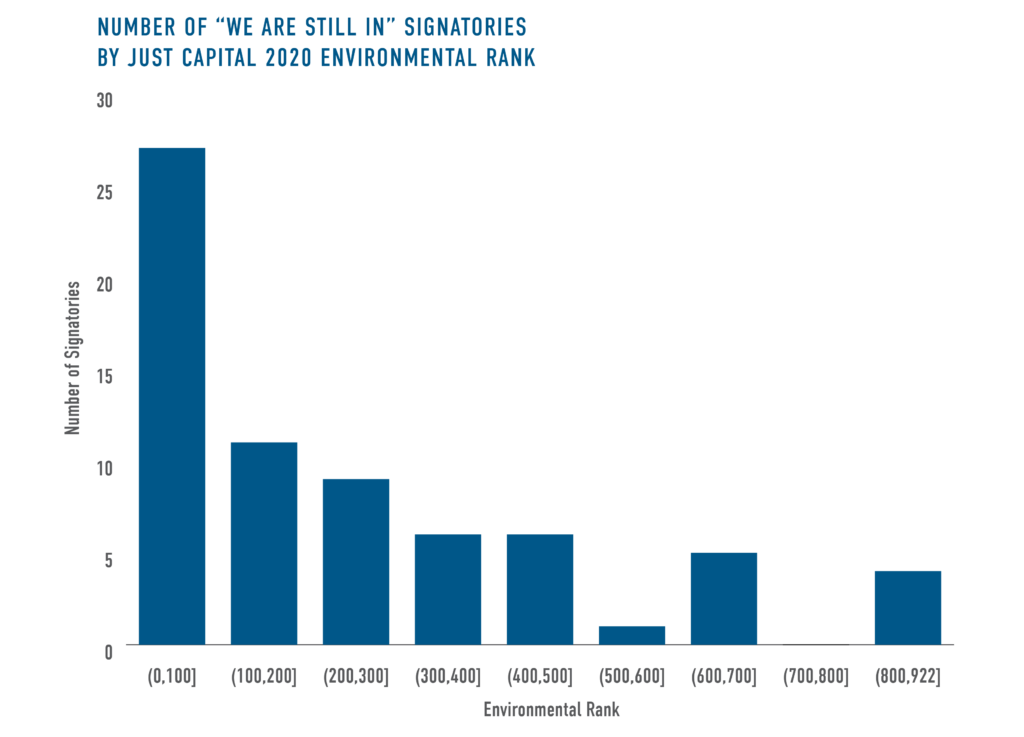 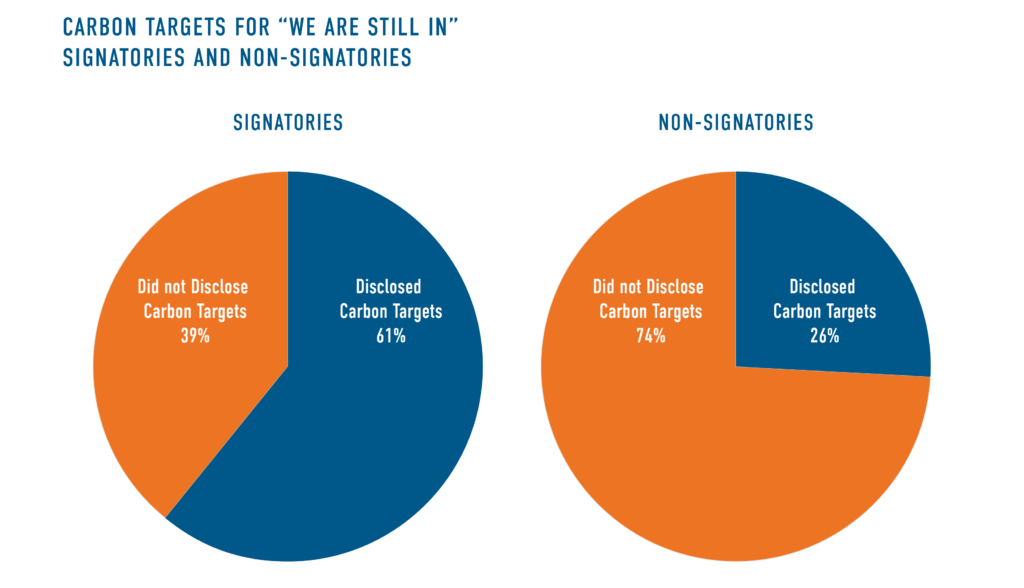 74% of these companies report their carbon emissions publicly, whereas 40% of other companies we rank do so – clearly showing a greater commitment to disclosure, transparency, and improvement in these areas among signatory companies. 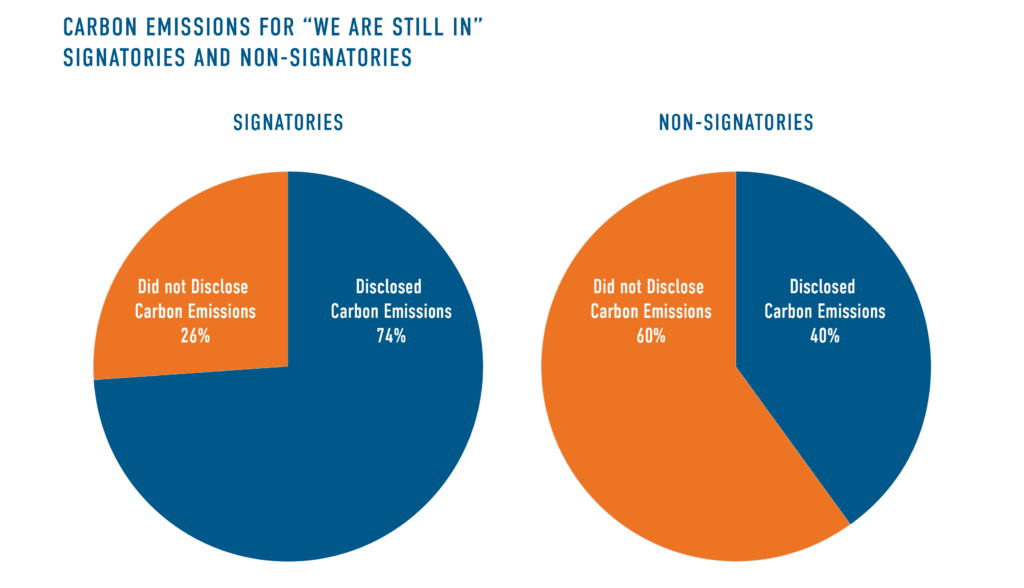 For example, Advanced Micro Devices – one of the signatories that we rank – has committed to a 2020 goal of improving its mobile processors’ performance per watt by 25 times, and requires its suppliers to use 40% less electricity than the industry average. This target has been recognized by the Science Based Targets initiative.

Edison International is also a leader on environmental issues. As a public utility holding company based in California – the parent company to Southern California Edison – Edison International has a relatively high carbon intensity, and pledged to reduce greenhouse gas emissions by 40% from 1990 levels by 2030, and by 80% by 2050 through electrification, turning to low-carbon fuels and modernizing its grid.

Among these 69 companies, we identified 12 that have demonstrated consistent efforts and made progress toward forging a low-carbon future. Facebook, JLL, Citi, Tiffany, Walmart, and others have worked to lower their carbon emissions – investing in clean energy or energy efficiency improvement projects – while also striving to grow their businesses and deliver value for their stakeholders. Over a seven-year time span, these 12 companies across different industries have reduced their emissions intensity between 17% and 76%, a clear effort to transition to a more environmentally just future. 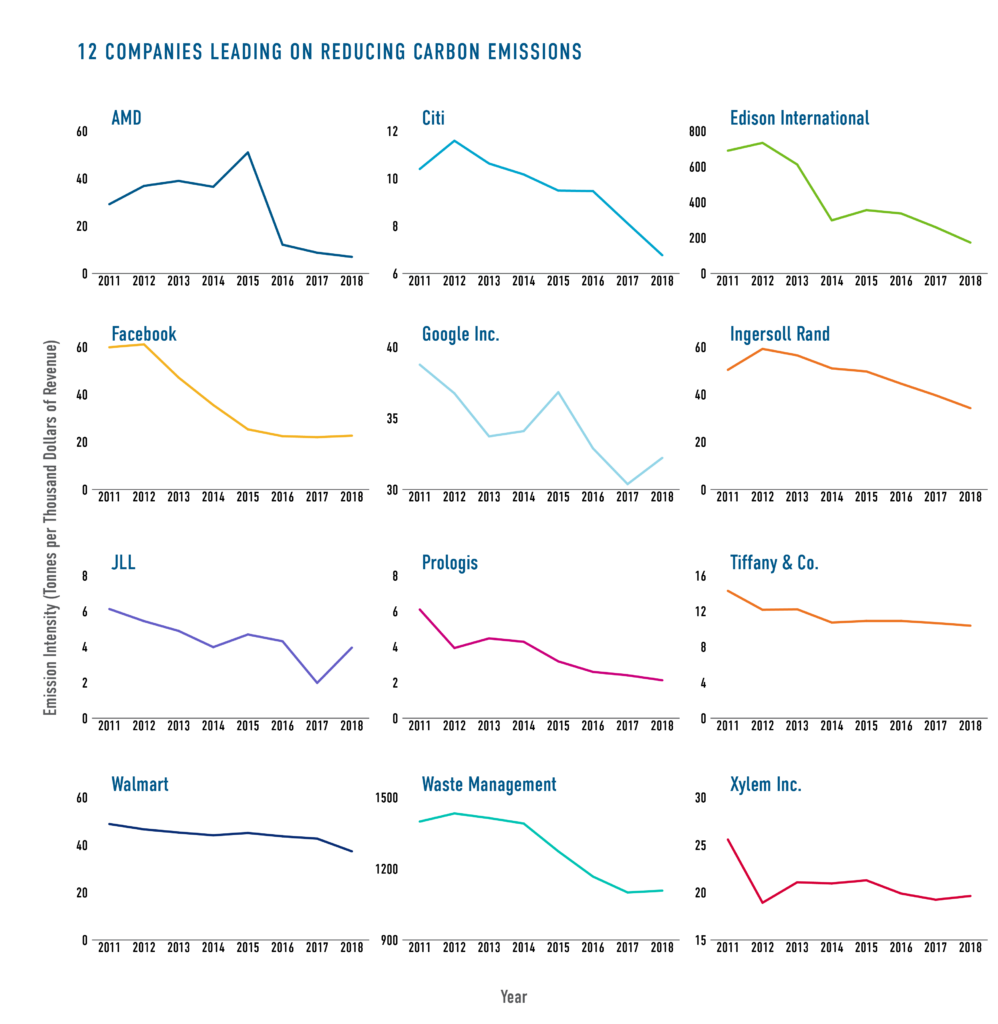 As companies like these shift from a model of shareholder capitalism toward one that addresses the needs of all stakeholders – including the environment – JUST Capital will continue to track the work they are undertaking to improve their practices, policies, and goals. 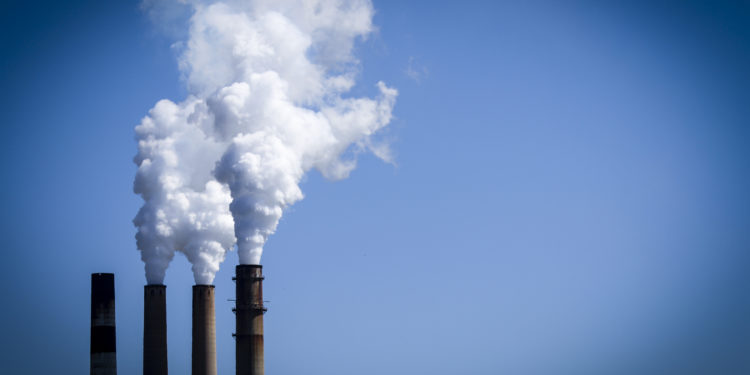 3 Ways Corporations Are Stepping Up on Climate 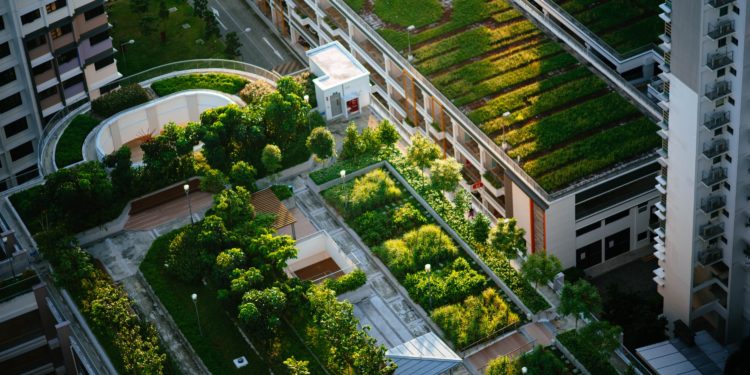