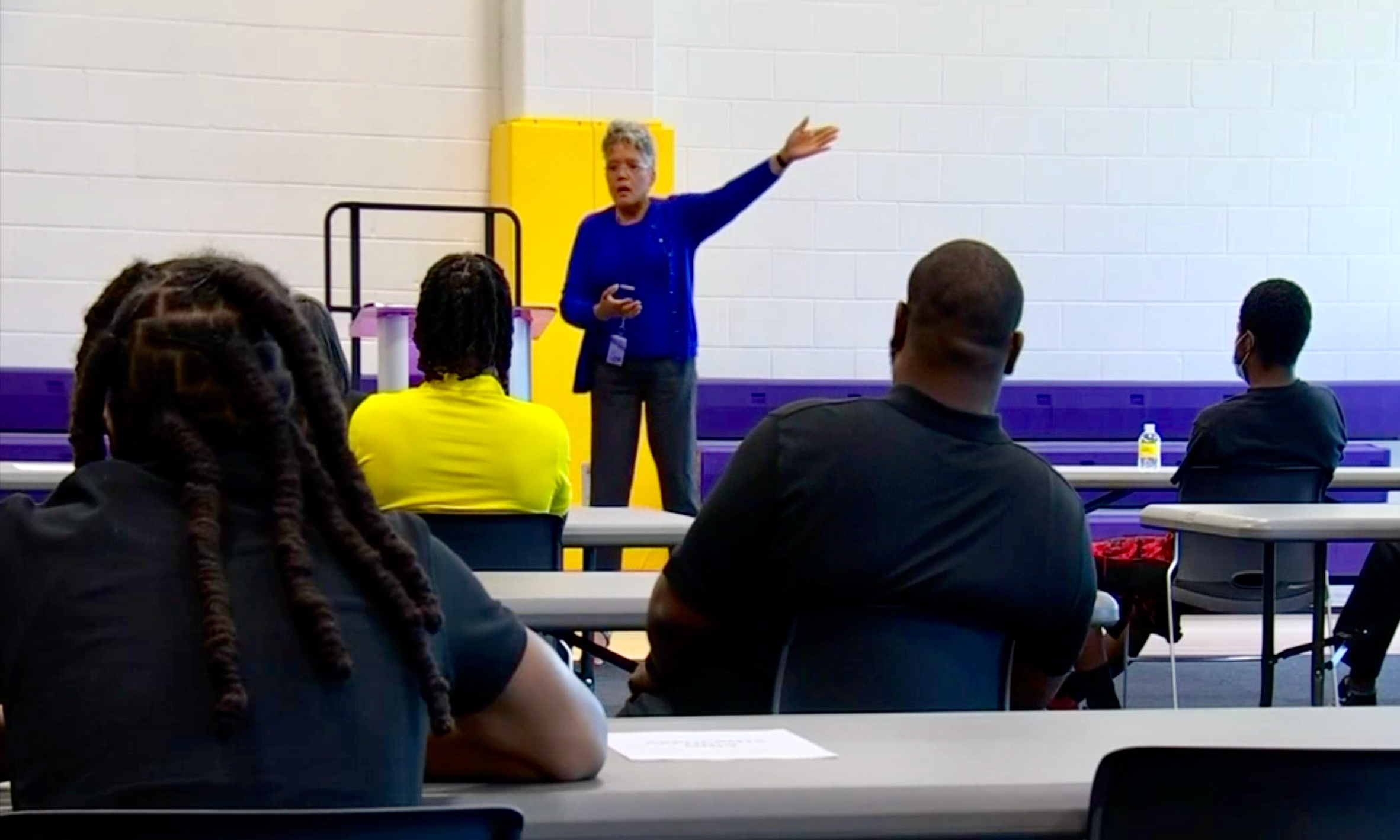 FedEx recruiter Jeannice Shobe speaks to a group of job applicants with criminal records at a second chance job fair in Fort Worth in May, 2021. (NBCDFW)

Sarah Green-Vieux and Richard Feloni contributed to this report. Yusuf George is project lead and Kavya Vaghul is research lead for our Corporate Racial Equity Tracker.

For much of American history, discriminatory criminal justice policies – such as Black Codes, stop-and-frisk, and the “broken windows” model – have intentionally targeted Black communities. This legacy of racism, which continues to persist in today’s criminal justice system, manifests in higher arrest rates, harsher sentencing, and overrepresentation of Black Americans in the prison population. As the ACLU notes, “One out of every three Black boys born today can expect to go to prison in his lifetime, as can one of every six Latino boys – compared to one of every 17 white boys.”

Following last year’s reckoning with racial equity in America, many corporate leaders have pledged to actively reevaluate the role they play in perpetuating systemic racism in America – including how they support or prevent mass incarceration and its long term impacts on families and communities. Impacts that include families’ inability to own or keep assets, leading to a host of economic security and social mobility issues for parents, as well as a range of social problems for children. Beyond the impacts on families, formerly incarcerated individuals have a difficult time reentering the workforce. Over 50% are less likely to receive a call-back or job offer, and the impact is twice as great for Black Americans.

In a recent public opinion survey, conducted with The Harris Poll on corporate responsibility to racial equity, we found that 78% of Americans overall and 87% of Black Americans believe companies should not discriminate against formerly incarcerated people when they apply for jobs and should not use prison labor to manufacture its goods or services.

To help unpack how some of America’s largest corporations are addressing deep-seated racial inequities in the criminal justice system and living up to the public’s expectations, JUST Capital’s Corporate Racial Equity Tracker, in part, measures three key ways in which companies can respond to the growing crisis around mass incarceration. The Tracker looks at the 100 largest U.S. employers in the Russell 1000, and, under the response to mass incarceration dimension, evaluates which companies (1) have re-entry or second chance policy, (2) ban voluntary or involuntary prison labor in its own operations, and (3) prohibits voluntary or involuntary prison labor in its supply chain.

Through the Tracker, we find that companies are more likely to make a commitment to responding to mass incarceration than they are to take concrete actions. So while 52 companies generally have at least one of the three key measures in response to mass incarceration, just nine companies have taken clear action by instituting a re-entry policy. 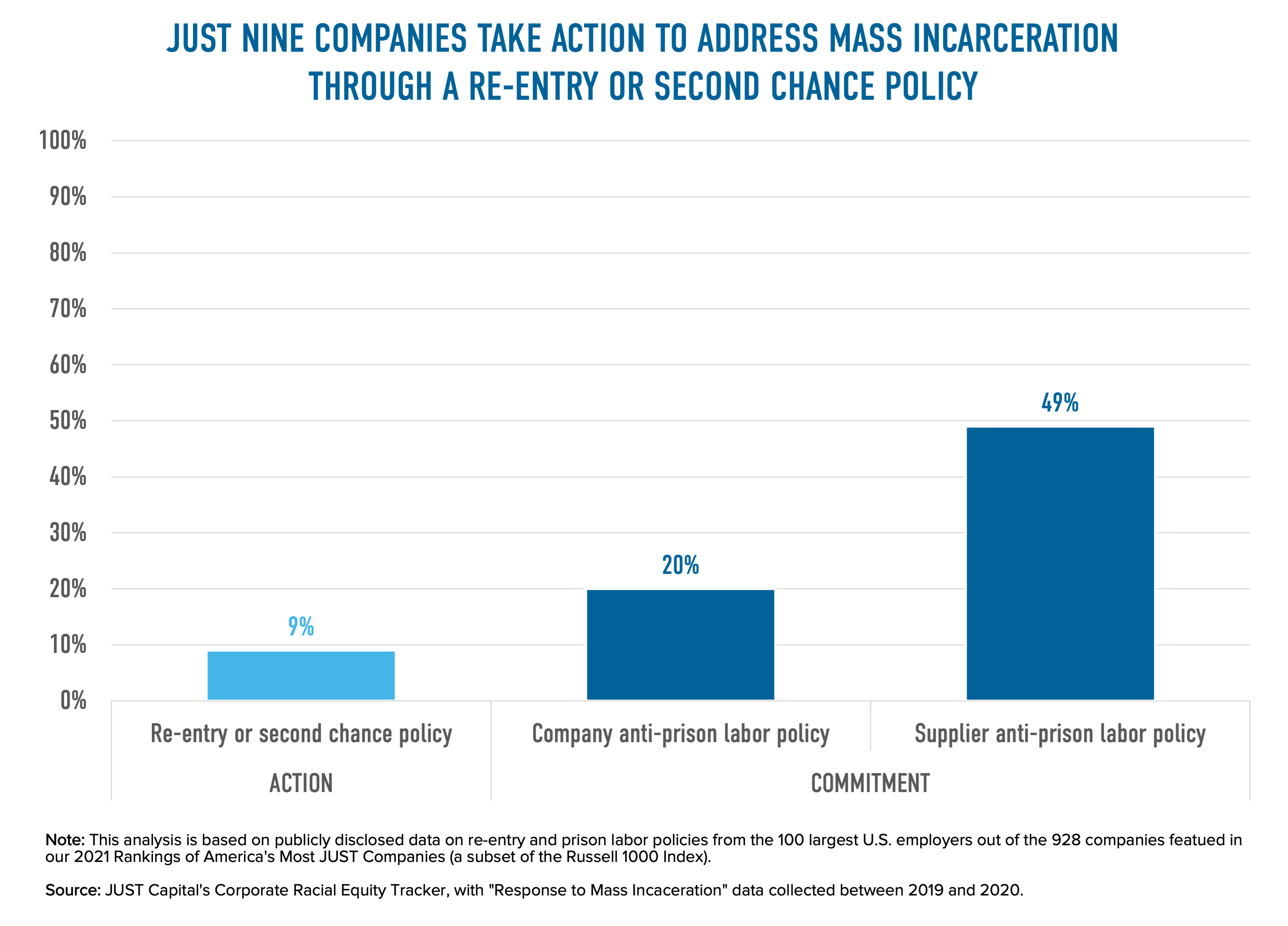 Re-entry, or second chance, policies are a meaningful approach to hiring people with a criminal background, reducing barriers to employment for 70 million Americans. These policies are a critical step companies can take to support communities of color that are disproportionately impacted by the legacy of racism and oppression in the criminal justice system. Aside from requirements of “ban the box” laws in certain states – which Urban Institute research shows in some cases can actually lead to heightened discrimination against Black and Brown job applicants – corporate re-entry policies entail job application initiatives specifically geared toward people with criminal records and providing those hired with tailored training and mentoring.

Craig Arnold, Eaton’s CEO, recently explained that policies that ban people with felony convictions “may as well be a life sentence” that has been found to lead to recidivism. He also noted that the American criminal justice system disproportionately punishes people of color, with effects that ripple through communities and have “a knock-on effect that can impact generations.” This is why he, along with the leaders of 29 other large corporations, recently announced the Second Chance Business Coalition (SCBC), dedicated to making it easier to hire people with criminal records and ensuring they have opportunities for career advancement.

Some of America’s largest companies have rejected policies that ban formerly incarcerated individuals from their workforces, and aspects of the second chance movement have received strong bipartisan support. And a smaller sum have taken an even more active approach to recruiting and training persons with criminal records, from Flower Foods, where second chance policies are baked into the company’s core value proposition, to JPMorgan Chase, which recently disclosed that 10% of its new U.S. hires in 2020 (more than 2,100 people) had arrest records. But there is clearly a significant opportunity for more companies to embrace a more proactive approach.

Just nine companies in our Corporate Racial Equity Tracker have a re-entry policy, a concrete action that companies can take to hire the formerly incarcerated. These companies are: Apple, AT&T,  Bank of America, Hilton, Intel, JPMorgan Chase, PepsiCo, Starbucks, and Walmart.

Five of those companies – AT&T, Bank of America, JPMorgan Chase, PepsiCo, and Walmart – are also members of the SCBC. Another 12 other companies in our Tracker joined the SCBC following our data collection, including: Accenture, Best Buy, CVS Health, GM, Kroger, McDonald’s, Microsoft, P&G, Target, The Home Depot, Verizon, and Walgreens Boots Alliance.

Implementing a ban on prison labor

Companies can also impact the lives of those who are currently incarcerated.

News that prisoners were producing items like hand sanitizer and protective equipment last year in the depths of the pandemic served as another infrequent reminder of America’s prison labor system.

It is difficult to track which companies benefit from cheap prison labor in their core businesses or supply chains due to a lack of mandated transparency. Courts have ruled that the Fair Labor Standards Act and National Labor Relations Act do not apply to prisoners, and prisoners are also excluded from U.S. Occupational Health and Safety protections.

In many states, incarcerated workers are paid less than 50 cents an hour, and in South Carolina and Texas they are paid nothing – which is why even though the practice is allowed by the 13th Amendment, organizations like the Brennan Center have called it “akin to slave labor.”

History has shown that when prison labor relationships become public, they lead to public outcry that then leads the company in question to either clarify that such practices existed in the past or will no longer be tolerated. And while this is not part of the tracked metric, the same has recently happened with Wall Street’s support of private prisons. Ties to profiting off of the incarceration system do not sit well with the public.

Relatedly, in the past several years, the socially responsible investment firm NorthStar Management has successfully pushed companies like Costco, Microsoft, and The Home Depot to audit their supply chains for prison labor – a tangible action that goes beyond rhetorical commitments.

In a public filing for fiscal year 2020, Costco wrote that it determined that 11 of its facilities still had prison labor in their supply chains, but that all gross wages were comparable to non-prisoners for the same work in that region. The company noted that by requiring better conditions,  a rehabilitation program might be possible – but that “reliably monitoring these additional standards has proven to be challenging due to the reduced transparency of prison systems in general,” and, “For this reason, we will begin to transition away from our limited use of legal prison labor.”

A commitment to racial equity means responding to mass incarceration

America’s reckoning with racial injustice has transformed the way corporate America speaks on the issue, and according to our survey research, the overwhelming majority of Americans – 79% total and 95% of Black respondents – want companies to promote racial equity in the workplace.

Companies can play an especially influential role in mitigating the impacts that mass incarceration has on the lives of individuals and communities.

You can explore which of the 100 companies we track have each of these three policies in the “Response to Mass Incarceration” drill down section of the Corporate Racial Equity Tracker below. For more information on our Tracker and racial equity work, please contact Yusuf George.