Richard Feloni and Catalina Caro contributed to this report. Yusuf George is project lead and Kavya Vaghul is research lead for our Corporate Racial Equity Tracker.

Last year’s movement for racial justice profoundly changed the ways corporate America talks about race, and provided an opportunity for companies to step up and make diversity, equity, and inclusion (DEI) within their organizations a true priority. This also gave new context to programs that certain corporations have had in place for years, around developing talent pipelines in underserved or overlooked communities across the country.

If companies are serious about their diversity, equity, and inclusion commitments, then they need to consider root causes of inequity within their own organizations. Companies have proven they can have significant influence over educational systems in underserved communities and rethink career development with opportunity-increasing outcomes. That is why in our Corporate Racial Equity Tracker we are noting which of the 100 largest public companies by workforce size have an apprenticeship program (52%), have a career development program (93%), and provide tuition assistance (87%). Nearly all (98%) check at least one of these boxes, and 45 have invested in all three. 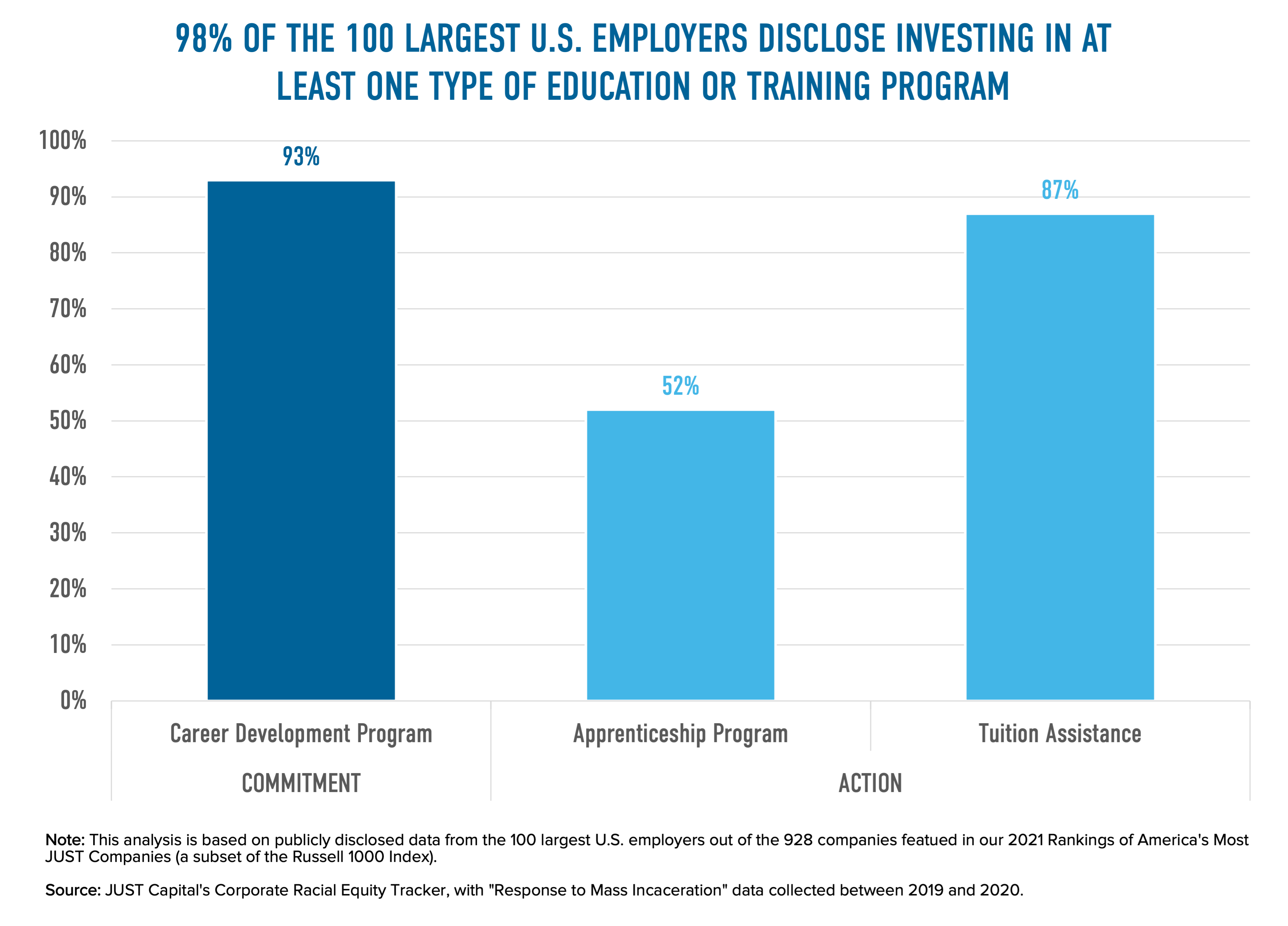 A consideration of these issues begins with systemic educational disparities across the country. Despite serving the same number of students, majority-non-white districts receive $23 billion less in annual funding than majority-white districts. And the data shows that the percentage of highly segregated schools has steadily increased. At the same time, Black and Latino students who achieve high test scores are less likely than their white counterparts to earn a college degree and, test scores aside, less likely than white students to finish high school. On a day-to-day level, Black and Latino students are also at a significant disadvantage in the classroom – with a greater likelihood of having less experienced teachers, and a majority of educators overall reporting lack of proper training to approach their work through an anti-racist lens.

These disparities carry over to higher education. According to the U.S. Census Bureau, the percentage of Americans with bachelor’s degrees or higher increased over the 2010s, but in 2019 there remained a sharp disparity among Americans age 25 and older with that level of education: 58.1% of Asians and 40.1% of non-Hispanic whites versus 26.1% of Blacks and 18.8% of Hispanics. On top of that, the average cost of attendance at public four-year colleges across the U.S. has skyrocketed over the past decade – with access to financial aid failing to keep pace, affecting Black and Latino students at a disproportionate rate.

The coronavirus pandemic’s disproportionate health and economic impacts made these, as well as many other systemic inequities, clearer than ever.

If corporations stick to the status quo, then these systemic educational barriers carry through to who they are bringing into their workforce, and which opportunities for career advancement are made available.

The public wants corporations to contribute to changing these inequities. In a recent survey of the American public conducted with The Harris Poll, we found that 86% of Americans overall, and 89% of Black American respondents, think it is important for large companies to provide education and training for workers, including apprenticeships, tuition reimbursement, and career development programs to advance racial equity in their workplace and business practices.

Companies like IBM, CVS, and JPMorgan Chase are leading the way with programs specifically aimed at increasing diversity within their organizations while benefiting over the long term the communities in which they do business. Their example can provide models for how their peers can pursue initiatives that can benefit both their workforce and the economy at large as the country bounces back from the pandemic.

A ‘new collar’ approach to careers

IBM has been at the forefront of rethinking talent pipelines with an emphasis on diversity, equity, and inclusion.

Back in 2010, then-CEO Sam Palmisano began a collaboration with New York City’s Department of Education and veteran NYC educator Rashid Davis to create the P-TECH school model (Pathways in Technology Early College High School). The first P-TECH school launched the following year in Crown Heights, Brooklyn, a neighborhood with large African-American and West Indies populations, in a city that the University of California’s Civil Rights Project deemed having one of the most segregated public school systems in the country. The team created a school that was open to the public with no entrance exam and included classes at the borough’s City University of New York campus. Students would follow a six-year program (with the ability to graduate earlier or later in certain circumstances) and graduate with a high school diploma and associate’s degree. Students would have direct access to IBM employees and the ability to enroll in internships, with the goal of graduating with a full-time IBM job or apprenticeship.

The model took off, and won support from both Presidents Barack Obama and Donald Trump. IBM has several P-TECH schools in underserved urban and rural communities across the United States, and shared the model’s format with both regional and multinational companies – including American Airlines and Volkswagen – to develop their own talent pipelines. Today there are 266 schools, 209 colleges, and 600 companies across 26 countries in the P-TECH system.

Palmisano’s successor, Ginni Rometty, embraced P-TECH as part of what she dubbed a “new collar” approach to work, catering to a sector that didn’t fall into blue collar or white collar norms. Rometty often cited IBM’s projections that by 2024, there would be “16 million jobs by 2024 that require post secondary degrees, though not necessarily a four-year college degree” – and that’s where the “new collar” comes in.

Rometty told fellow CEOs at the World Economic Forum’s annual meeting in 2019 to “change your paradigm of hiring” and hire based on skills, not résumés, and provide pathways to accompany it. The result would be more diverse, stronger companies that contributed to a stronger national economy with a better distribution of career opportunities.

Similar to the ways it spread its P-TECH model, IBM partnered with the Consumer Technology Association in 2019 to create a coalition of companies sharing the approach to tech apprenticeships IBM pioneered, recruiting Amazon, Ford, Microsoft, and Walmart.

IBM’s New Collar Apprenticeship Program has continued under CEO Arvind Krishna, who took the role last year. IBM’s program touts a man going only by his first name, Tony, who joined the New Collar initiative after working as a barista. He wrote in a blog that his class of 13 included a firefighter, nail salon worker, and mail delivery driver who lacked advanced degrees but shared “a passion for technology.” 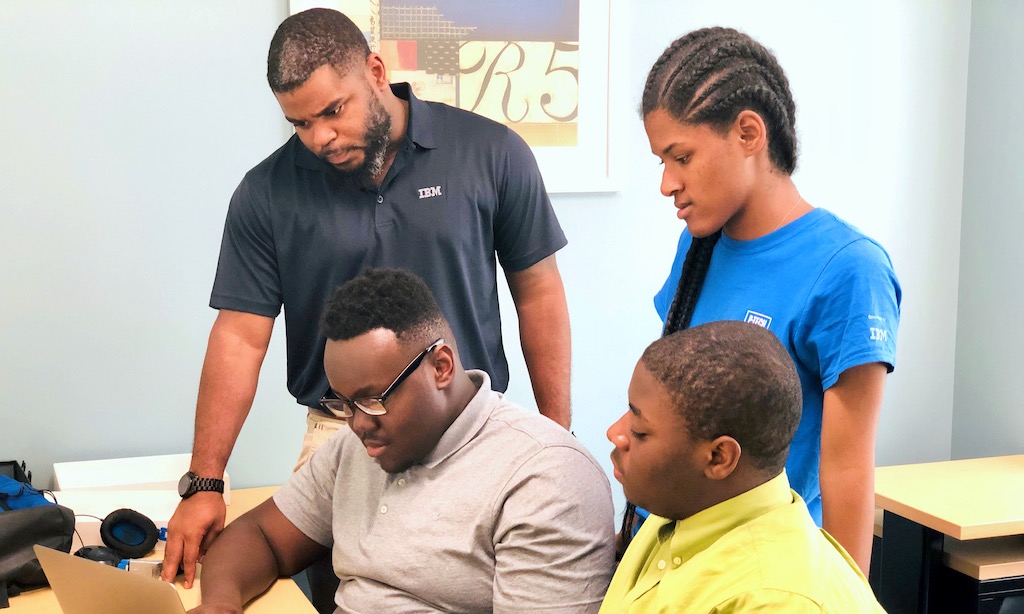 Students at an IBM P-TECH school in Baltimore. (IBM)

CVS launched the nation’s first pharmacy technician apprenticeship program in 2005 in Detroit, the city with America’s largest Black population. CVS made its chief diversity officer part of the program to ensure that it was increasing career equity across demographics at the organization, and in its latest DEI report, CVS noted that it hired 13,000 employees through this program since 2005, and plans on hiring 10,000 more apprentices over the next five years.

In the financial sector, JPMorgan Chase launched the Advancing Black Pathways initiative in 2019, with a fellowship program for Black undergraduates during the summer following sophomore year. Its goal is to hire 4,000 Black students in the program’s first five years across apprenticeships, internships, and post-graduation jobs.

As for the tuition reimbursement programs we track, Starbucks has touted how its own is aimed at increasing equity of career opportunities among its workforce. Its employees averaging 20 or more hours a week can receive full tuition reimbursement for Arizona State University’s online bachelor’s degree program with military veterans given the opportunity to extend this benefit to a family member. More than 4,500 employees have graduated from this program as of last June.

A clear opportunity for success

While the statistics pulled from our Tracker may suggest that America’s largest companies have fully embraced the training and education side of DEI, we should note that we are unable to assess the broad impact of these programs on employees of color and whether they are actually advancing racial equity across communities. That is why it is all the more powerful when companies like IBM intrinsically link advancements in racial equity to their workforce development goals.

Enough corporate leaders have recognized that existing talent pipelines and traditional requirements around so-called blue-collar and white-collar jobs are unsustainable. Simultaneously, workers are increasingly demanding equal opportunity, respect, inclusion, and benefits for themselves and their families. If CEOs and their teams can deliberately develop and then demonstrate the ways apprenticeships, career develop programs, and tuition reimbursement can contribute to their DEI efforts, they will be taking advantage of a major opportunity.

You can explore which of the 100 companies we track have these three policies in the “Training and Education” drill-down section of the Corporate Racial Equity Tracker below. For more information on our Tracker and racial equity work, please contact Yusuf George.