This report was authored by Aleksandra Radeva, Ian Sanders, and Shane Khan.

In today’s uncertain economic climate – in which Americans are navigating both a tight labor market and soaring inflation – workplace issues are becoming increasingly important not only to workers themselves, but also to government leaders and investors. With the SEC signaling that changes to reporting human capital requirements may be on the horizon, we asked the public their views on corporate disclosure overall, and found that 87% of Americans support the federal government requiring corporate disclosure on human capital and environmental impact data.

Despite widespread support for increased disclosure, when we analyzed the state of human capital disclosure among America’s 1000 largest public companies, we found that overall they are currently lagging. In our latest analysis – The Current State of Disclosure Issues: What Data Russell 1000 Companies Publicly Share – we assess key measures of corporate performance on worker issues, including 23 worker-related data points from our 2022 Ranking of America’s Most JUST Companies.

Of the 23 worker-related data points we analyzed, 18 were disclosed by fewer than 50% of companies, and the average company discloses only eight data points in total. Only one data point – whether companies disclose having a diversity and opportunity policy, a table stakes DEI disclosure – was reported by more than 75% of companies.

Read on for more key findings and download the full report below.

Disclosure on worker issues is low.

Disclosure on worker data points ranges from 1% to 97%, with higher rates of disclosure for the existence of policies (e.g. DEI, paid time off, tuition reimbursement, paid parental leave) than for performance on specific metrics (e.g. gender/race/ethnicity workforce disclosures, number of weeks of leave for primary and secondary caregivers for paid parental leave). In fact, almost all (six of eight) performance data points are disclosed by fewer than 40% of companies. 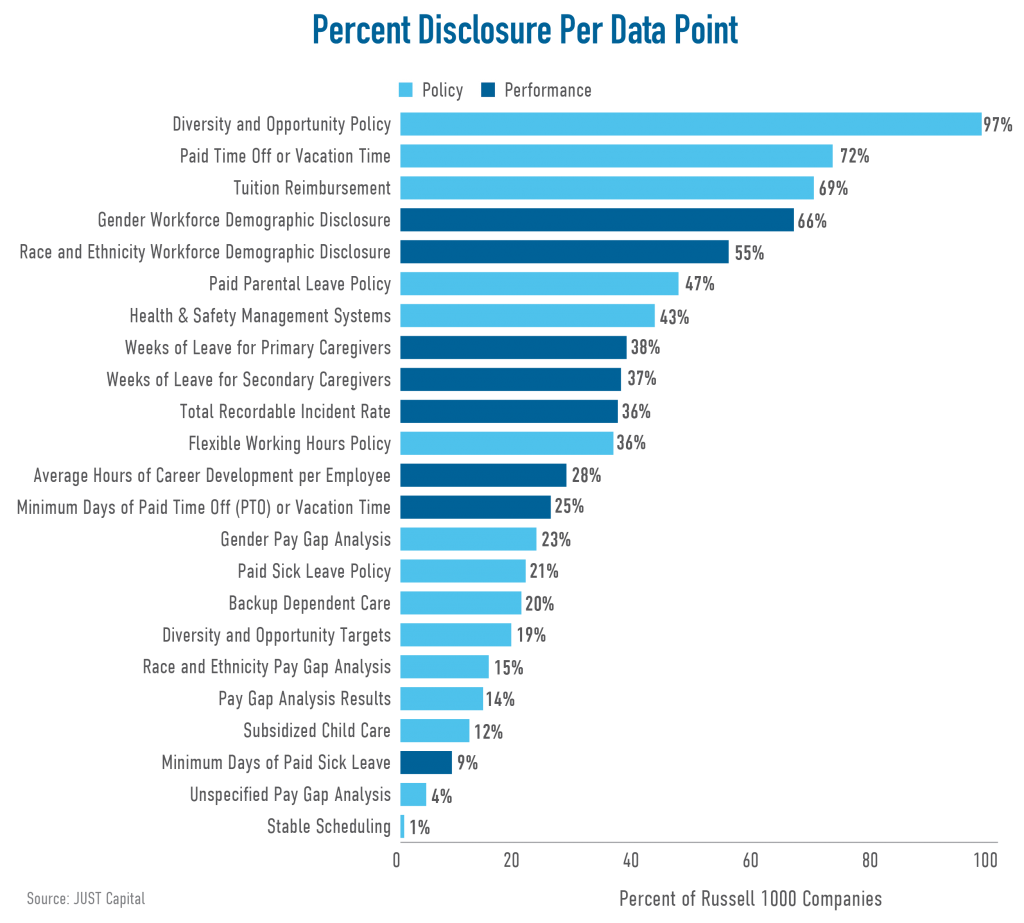 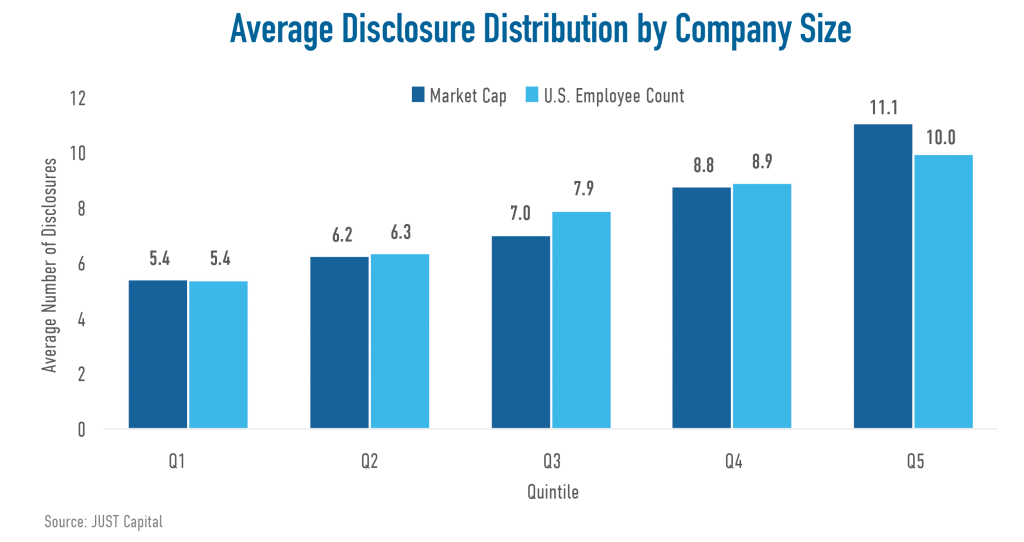 All companies have more work to do.

To better analyze how companies and industries disclose, we have divided the disclosure distribution into two categories, Leaders and Laggards – which represent the top or bottom 10% of disclosure on worker-related data points. The 96 companies that comprise our “Laggard” category disclose three or fewer data points, with three companies in this section disclosing no information on any worker data points at all. However, even the 109 “Leading” companies did not exhibit  a consistently exemplary performance. The average Leader reported only two-thirds (14) of the data points out of a total 21. This lack of disclosure, even among leading companies, suggests that there is still much room for improvement surrounding worker data.

Over the last two years, we have seen some encouraging progress in disclosure on a few key worker issues, including pay equity and diversity, equity, and inclusion. Following NYC Comptroller Stringer’s 2020 campaign calling on major U.S. companies to release their Consolidated EEO-1 reports, coupled with increased demand for transparency from the media, investors, and the public around the workforce composition at these companies, JUST Capital has observed notable increases in EEO-1 and other race/ethnicity data disclosures.

Nonetheless, there is room for improvement across the board, as disclosure on most of the data points we analyzed remains below 50%. With an increased focus on workers’ experience and quality jobs that pay a living wage and offer a robust benefits package, JUST Capital will be exploring which companies offer just jobs of the highest quality to their workers. 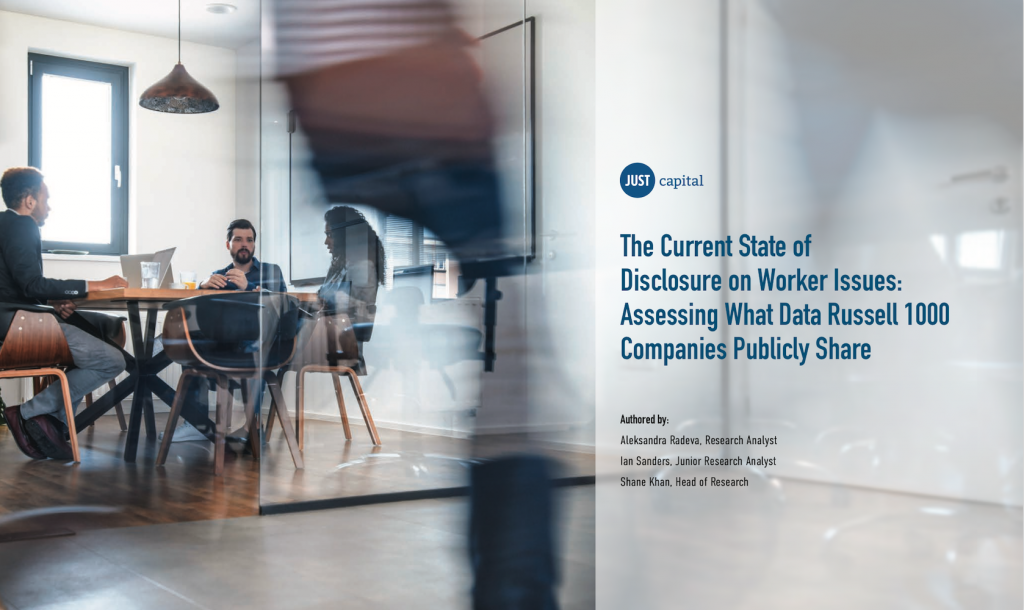 The Current State of Disclosure on Worker Issues: Assessing What Data Russell 1000 Companies Publicly Share is the second in a series of analyses from JUST Capital on the state corporate disclosure by Stakeholder, with our first report exploring the state of environmental disclosure. There are many uses for this dataset on workers data disclosure and our planned future analyses. If you’re an investor, policymaker, worker, or other stakeholder with further questions or interest, please feel free to get in touch.