Late last month, smack dab in between Mother’s and Father’s Days, JP Morgan Chase reached a settlement in its lawsuit around equal access to paid parental leave for parents of any gender – a major step considering that, until recently, it wasn’t a given for both mothers and fathers to receive family leave. Companies like JP Morgan are catching up to this shift in workplace culture, and starting to provide equal leave to all. And with studies published by the Department of Labor and the National Bureau of Economic Research showing that paternity leave can promote improved outcomes for children, minimize postpartum health impacts for mothers, and increase gender equity at home and at work, this is a victory not just for fathers, but working families in general.

The reality is that, even with these improvements, few people have access to quality family leave today, and fathers in particular have little to no leave. Even when they do, many working fathers come up against corporate structures and cultures that discourage them from taking it. With paternity leave either nonexistent, brief, or discouraged, men are tangibly less involved in the day-to-day of their children’s lives, and the BLS’s American Time Use Survey – released earlier this week – showed that, while 92.1% of women with children under six reporting caring for them on an average weekday, just 73.7% of men reported the same.

How can we bridge this gap?

At JUST Capital, we’ve learned that work-life balance and good benefits are top priorities for the American public when we asked what they believe is most important when it comes to just business. While more and more companies are now offering paid family leave to their employees, we’re still falling short, and according to our research, only 28% of the 875 largest, publicly traded U.S. companies disclosed a detailed paid parental leave policy. 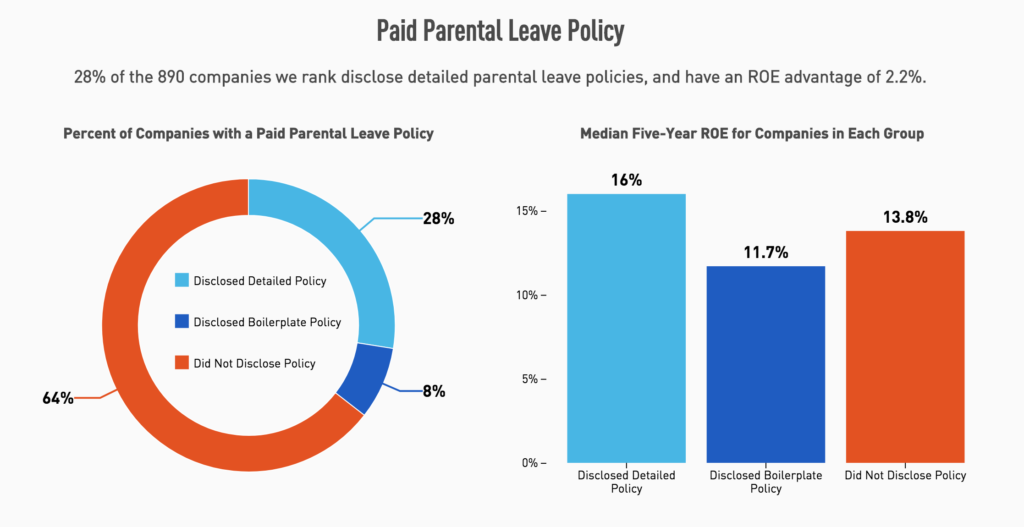 The good news is that these companies outperform their peers on a median five-year ROE analysis, supporting the case that investing in parental leave can and should be a win-win for companies and their workers.

But of those companies disclosing detailed leave, just 21% offer the same amount (which can range from a paltry 1 to exceptional 26 weeks) to both mothers and fathers (or primary and secondary caregivers). While the paid leave landscape may generally be improving, there’s a long way to go toward creating equal access to all parents.

Among the 64 companies already doing so, 14 are going above and beyond, offering 16 weeks or more to both mothers and fathers – these include:

Among this list, three stand out especially: Prudential offers more than six months paid leave to primary and secondary caregivers. Estee Lauder increased its paid leave to 20 weeks after resolving a discrimination lawsuit similar to JP Morgan’s. And when Netflix established its unlimited family leave policy in 2015, the company came under fire for not extending to hourly employees or those working in its DVD division. The company eventually extended its generous policy to all employees – whether salaried, hourly, frontline, or corporate – another critical battleground in the fight for fair, equal paid leave to all working parents.

The significance of paid parental leave cannot be denied – both for the opportunity it provides parents to bond with a child, for its capacity to strengthen working families’ finances, and for the equity it can foster at work and at home. And while improvements are being made, and more and more companies are taking the lead, their policies must today be evaluated on the details: How much leave is given? Does it cover primary and secondary caregivers? Adoptive and foster parents? And at what rate of pay?

JUST Capital is deepening the granularity of its analysis on this and other crucial workplace policies – like pay equity, diversity & inclusion targets, and workplace discrimination – in an effort to better understand how companies are measuring up on the issues that matter most to the public. And perhaps most importantly, to incentivize better business behavior and create new best practices that benefit all Americans – including working parents.