This alignment on the importance of board diversity is bolstered by insistent investor support, advocacy efforts, and state mandates. Burns said that she considers the corporate response to the racial injustice reckoning propelled by George Floyd’s murder last year to be “a movement, not a moment,” and she believes that because organizational change around equity and inclusion requires leadership involvement at the board level, board racial and ethnic diversity has never been more important.

In a recent survey of the American public conducted with The Harris Poll, we found that 73% of the respondents across demographics, and 87% of Black respondents think it is important for large companies to publicly share their progress on diversity programs by reporting statistics on the demographic makeup of their workforce, leadership team, and board.

We wanted to see how the nation’s largest companies performed on this metric, and found 63 of the 100 companies in JUST Capital’s Corporate Racial Equity Tracker disclose their workforce demographics (inclusive of but not limited to EEO-1 Report disclosure) and 83 companies have disclosed racial/ethnic data about their board of directors or director nominees. While board diversity reporting has historically been focused on gender, companies have started to report racial/ethnic board data at higher rates, especially in the last two years.

As part of our Corporate Racial Equity Tracker, JUST Capital researched whether companies disclose the racial/ethnic diversity of their board or director nominees, as reported in companies’ proxy statements. We found a considerable increase in disclosure: In 2019, just 45% of 100 largest U.S. companies disclosed racial/ethnic board diversity, and as of 2021, 83% reported the same – a 38 percentage point jump. This expansion of company-reported data has allowed JUST to identify which companies have highly diverse racial/ethnic representation on their board. It is also striking that low rates of board racial/ethnic diversity are not preventing companies from disclosing. 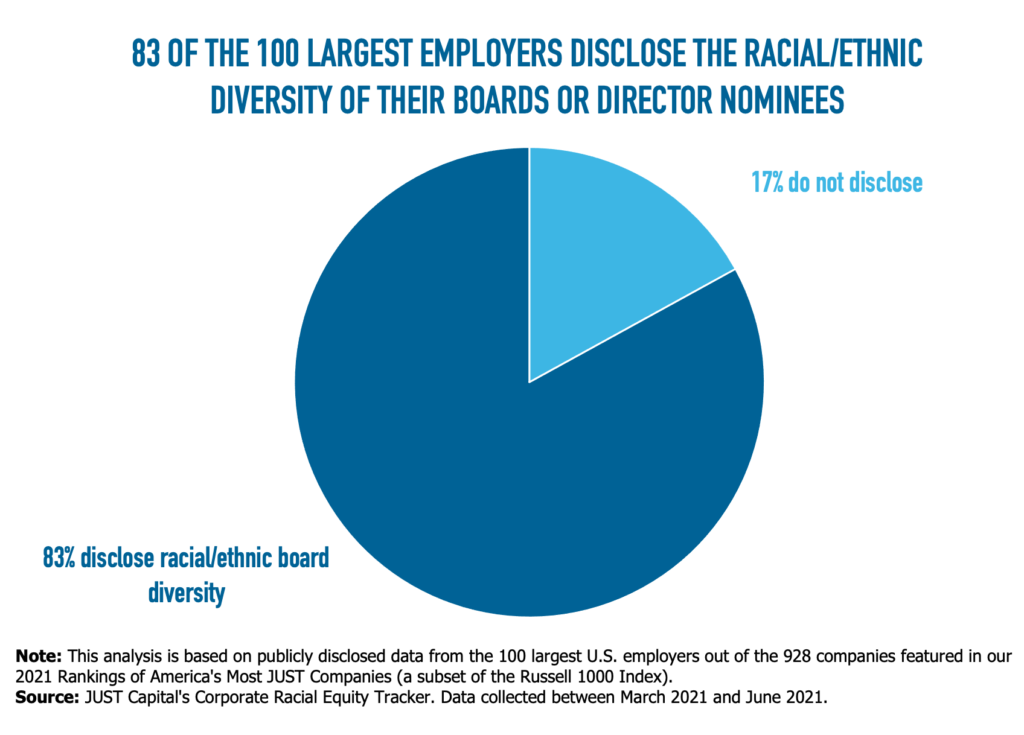 As governing bodies that shape long-term strategy of companies and have the authority to hire and fire the CEO, board members hold distinct power and influence in corporate America. They are also disproportionately white. JUST Capital found that approximately two thirds of the 83 largest companies reported 30% or less non-white directors or director nominees on their boards, with an average of 24.6% racial/ethnic diversity. When compared to recent data from the U.S. Census Bureau that indicates approximately 40% of the population is non-white, the majority of these corporate boards are not representative of the U.S. population. Most companies, however, do not set board diversity targets against representation of the population, but instead benchmark themselves against the average board diversity of indexes like the Russell 3000 or the S&P 500. This translates to lower targets for diversity. 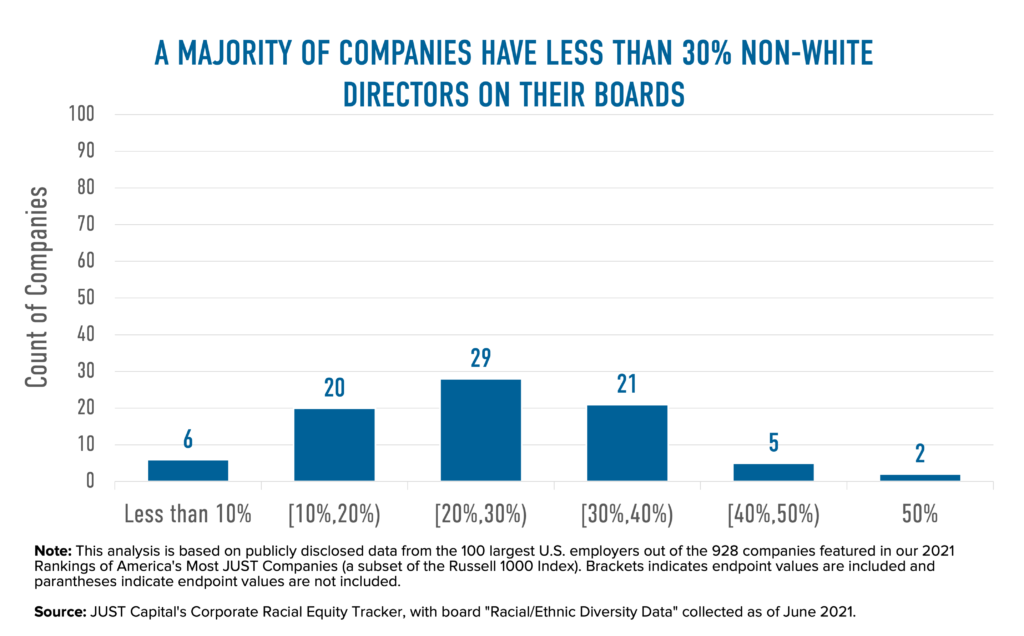 The Benefits of Diverse Boards and How to Achieve Them

From a performance standpoint, companies with diverse boards can benefit from the creativity, innovation, and enhanced problem solving that is possible in groups of people with different backgrounds, according to research published in American Psychologist in 2008. Last year, a team led by researchers at North Carolina State University also found that board diversity, like diverse leadership, can also send a message to employees that advancement is possible for people of color at every level.

As advocates like those at the Board Diversity Action Alliance have said, racial equity starts at the top and when leadership appoints diverse executives and board members who want to advance DEI, it can have a trickle-down effect throughout a company.

The scarcity of company-released board racial/ethnic diversity data prior to 2021 has made analyzing the impact of board racial/ethnic diversity challenging but there is evidence that racially diverse boards can lead to better working environments for employees of color. In 2019, researchers at the University of Texas Rio Grande Valley and Ohio University tested the notion that diverse leaders are more supportive of anti-discrimination policies and practices, and found that higher proportions of non-white directors are associated with lower likelihoods of discrimination lawsuits.

Of course, appointing non-white directors does not guarantee a more equitable company. To avoid tokenism, companies need to nominate directors for acumen and experience beyond their diverse status and Wharton research from 2019 shows that companies benefit most from director diversity when the board’s culture is open and encourages the viewpoints of all directors.

Challenges to Board Diversity

Regardless of the support for diverse leadership, traditional board recruitment processes have often proven to not increase board diversity. Existing directors frequently start with who they know for new candidates and when the existing directors are all white with homogeneous professional circles, their reliance on close ties for recruitment does not lead to racially diverse appointments. To try to address this, some companies have adopted their version of the Rooney Rule, which requires them to interview racial/ethnic minority candidates for upcoming board seats. While this rule encourages a more inclusive recruitment process, it has led to varying success in diverse appointments.

Another challenge to board diversity is the narrow notion of who is qualified. Some leaders believe prior CEO experience is necessary while others require executives to have experience reporting directly to the CEO in order to join. Both of these restrictions vastly limit the number of candidates who are able to be considered and also leads to companies recruiting from a small pool of non-white business leaders – many of whom already serve as directors – to diversify their boards. This “overboarding” means that instead of expanding opportunities for underrepresented professionals, companies are picking from a small pool of known quantities.

Companies With the Most Racially Diverse Boards

Companies within the 100 largest U.S. employers that are leading the way in board racial/ethnic diversity are Starbucks, Accenture, Target, Verizon, Anthem, L Brands, and Cognizant Technologies, all of which have reported board racial/ethnic diversity between 40-50%. As stated earlier, recent census data shows that the U.S. is 40% non-white so these companies’ boards are either representative or more racially diverse than the United States. 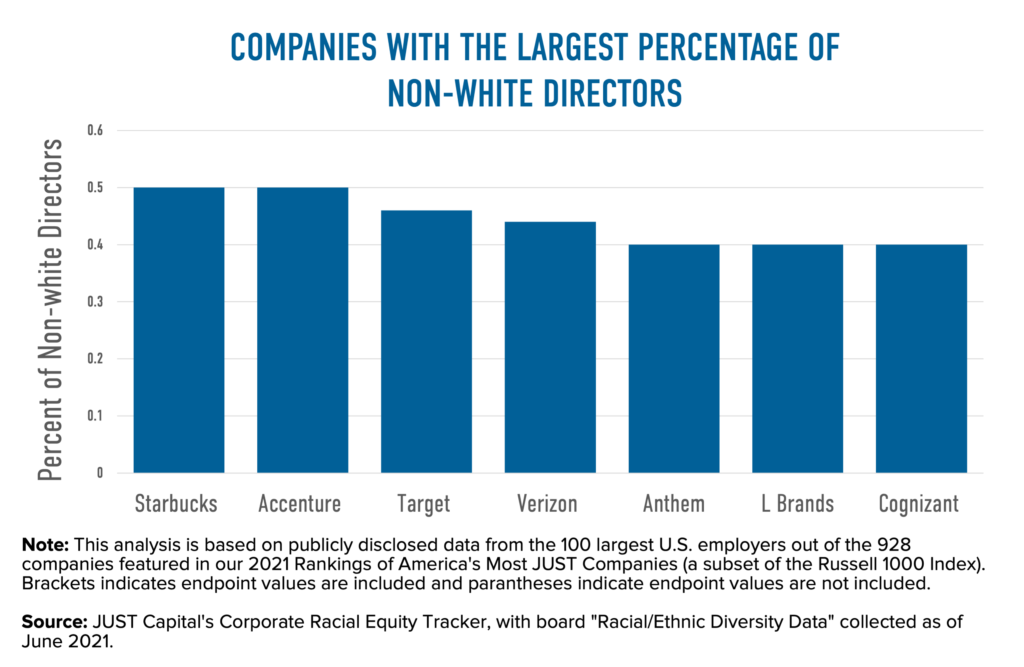 Starbucks and Accenture have the most racially diverse boards, each reporting 50% non-white board members. Starbucks has been taking steps to diversify its board since 2017 and recently appointed Mellody Hobson, who has been outspoken about the need for board diversity, to serve as board chair.

At a Bowdoin College event in April, Hobson argued that diverse boards will be necessary to best serve customers and accommodate employees in an increasingly diverse country connected to an increasingly connected world. “You can’t be a leading company in the world and not have a diverse board or have a real agenda around diversity without at some point dying as an organization,” she said. “I would strongly advise corporations to think long and hard about having targets for what kind of representation they want in their boardrooms, and how to get there over time.”

Accenture expressed the same benefits of a diverse board before the corporate racial equity movement of the past year, placing emphasis on how a diverse board allows it to be a more competitive global organization taking into consideration a broad array of viewpoints. CEO Julie Sweet alluded to this global competitive advantage in a LinkedIn post in October, in which she explained how the company would be advancing its DEI efforts not only in the U.S., but in each of its markets around the world.

External Pressure for Board Diversity

Perhaps because of the business case for diversity or perhaps because it is the equitable thing to do, many investors championed board diversity prior to last year’s racial injustice reckoning. In 2015, institutional investors with over $1 trillion in assets under management called on the SEC to require board diversity disclosure on director nominees’ gender, race, and ethnicity, in addition to relevant professional skills.

After the SEC did not include board diversity disclosure in its requirements, investors and financial institutions began flexing their muscle to push companies to diversify their boards. Board diversity has become a common feature of proxy statements where companies disclose the racial/ethnic diversity of their board of directors or director nominees up for election. Vanguard advocated for disclosure of board recruitment and board diversity measures. Goldman Sachs stated that it will no longer support initial public offerings of companies in the U.S. and Europe unless they have at least one “diverse” board member.

And, as mentioned earlier, last December Nasdaq instituted a policy that requires thousands of companies listed on its exchange to include women, racial minorities and LGBT individuals in their boards, or provide an explanation of why it is not necessary for them to have a diverse board member. In January 2021, State Street Global Advisors reported that they would vote against the chair of the nominating and governance committee at companies in the S&P 500 and FTSE 100 that did not disclose the racial and ethnic composition of their boards. And asset manager BlackRock voted against 130 boards this year because of their lack of diversity.

Activists are also filing shareholder proposals for board diversity in increasing numbers among other diversity disclosures and racial equity initiatives.

In an effort to diversify the pipeline for boards, Roosevelt Giles, one of JUST Capital’s board members and Executive Chairman of the Board of Atlanta Life Financial Group, helped form the Herndon Directors Institute (HDI). The institute trains minority and female fellows to serve on boards and advocates for more board seats to go to minority candidates. The Board Diversity Action Alliance, founded by Ursula Burns and other business leaders, is one of many coalitions designed to expand the representation of racial/ethnically diverse directors on boards and companies like Mastercard, Pepsico, and Starbucks have signed onto this initiative.

In conjunction with pressure from investors and advocates, state governments are pushing companies to diversify their boards with disclosure requirements and quotas. Although there have been some legal challenges to quotas, California, home to some of the most profitable companies in the world, continues to pass legislation in this regard. Starting with SB 826 in 2018, which required companies headquartered in California to have at least one woman on their board, California expanded its board diversity requirements by passing AB-979 in 2020. That law requires companies to include at least one director from an underrepresented community, defined as “an individual who self‑identifies as Black, African American, Hispanic, Latino, Asian, Pacific Islander, Native American, Native Hawaiian, or Alaska Native, or who self‑identifies as gay, lesbian, bisexual, or transgender” to their boards by the end of 2021. Companies are required to further diversify their boards with at least 25% directors from underrepresented communities by the end of 2022.

We expect to see the trend towards greater board diversity and disclosure continue as companies respond to pressures from investors, states, and advocacy groups. As companies continue to participate in the diversity, equity, and inclusion movement, it’s important for them to have a diverse governing body that can hold them accountable to the commitments they’ve made, whether it is to create a more equitable workplace or improve outcomes for communities of color. Historically, companies have not reported board racial/ethnic diversity as frequently as gender diversity but with expanded disclosure, researchers will increasingly be able to assess the impact of racially diverse boards on other key ESG issues.

You can explore which of the 100 companies we track have disclosed their board data and their percentage of non-white directors in the “Racial/Ethnic Diversity Data” drill-down section of the Corporate Racial Equity Tracker below. You can also sort by the “Board Data Disclosure” and “Board Racial/Ethnic Diversity” fields. For more information on our Tracker and racial equity work, please contact Yusuf George.