This past year has been one of tremendous economic uncertainty as many Americans struggle to keep pace with elevated inflation and the rising cost of living. But what remains crystal clear is the public’s unwavering agreement, year after year, that companies’ top priority should be paying a fair and living wage to their workers. This year’s Annual Issues Survey – The People’s Priorities found that a fair, living wage remains the most important business Issue – in fact, it has doubled in importance over the last two years, comprising 21% of our annual Rankings model in 2023. This belief holds across political divides – in another recent survey, we found that strong majorities of Democrats (93%), Independents (83%), and Republicans (75%) alike agree that large companies have a responsibility to pay full-time adult workers in frontline jobs enough to make ends meet.

Despite this consensus, there is remarkably little transparency on worker pay. It remains difficult to track corporate performance on this issue, and while 89% of Americans favor the release of minimum wage rates for frontline and entry-level workers, again with broad bipartisan support, publicly available wage data is overall sparse and unstandardized. 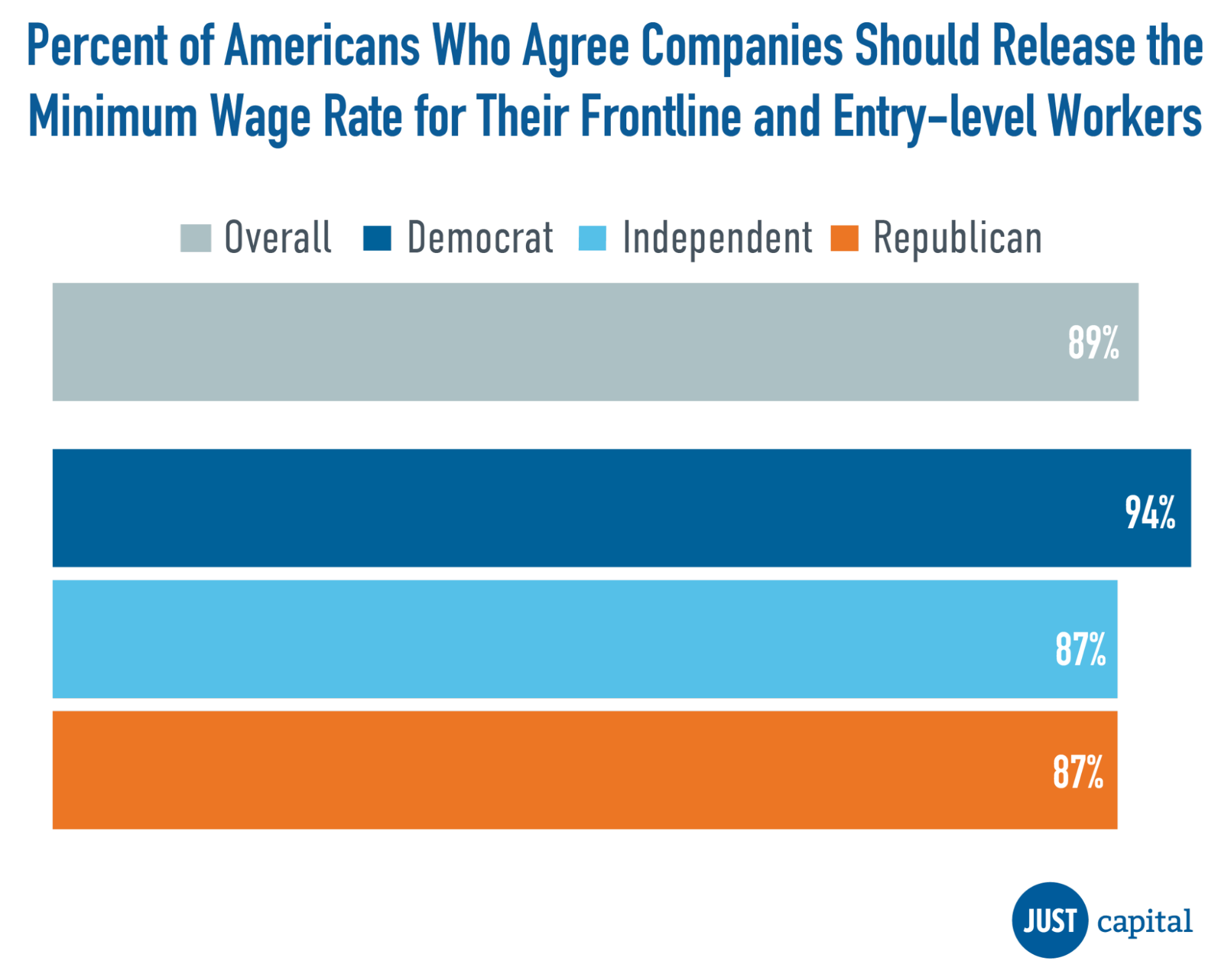 That’s why for our 2023 Rankings we’ve enhanced how we are tracking and measuring performance on this key issue, which includes a new partnership with Revelio Labs, and a new data point tracking whether a company discloses any information on hourly wages, as well as its minimum, or lowest entry level, wage, which we will preview and explore in this article.

When we looked across the companies that will be featured in our 2023 Rankings in January, we found that only 13% of America’s largest companies disclose some data about their employees’ hourly wages, and even fewer, 9%, disclose the exact value of the minimum wage paid to their U.S. workforce. 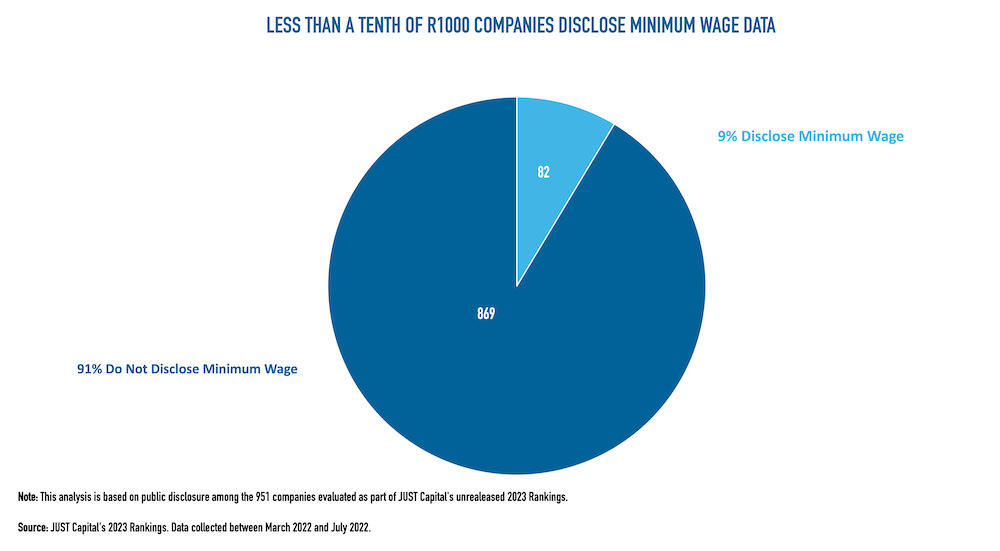 This low level of disclosure is not only in stark contrast with the degree of transparency that the American people seek, but also makes it increasingly challenging to assess wage performance against the backdrop of rising inflation.

Not many announcements around wage increases

To better understand how companies are responding specifically to inflation, we also looked into how many companies have made recent public announcements around minimum wage increases for their workers. We examined public wage increase announcements that contain information about the new and previous minimum wage value as well as the date announced and date effective, and that applied to all of the company’s U.S. employees regardless of occupation or location. This form of disclosure enables us to evaluate the percentage real increase or decrease of that new wage in reference to the previous wage.

But there is a trend toward increasing transparency

While the number of public minimum wage increase announcements is low, the data does indicate a gradual change towards greater transparency and rising wages. A clear majority – 21 out of 33, or 64% – of new minimum wage increase announcements have occurred over the past two years. Such data suggests that companies have begun to recognize the importance of wage transparency, especially in light of attracting and retaining talent amidst both rising inflation and calls for higher minimum wages. 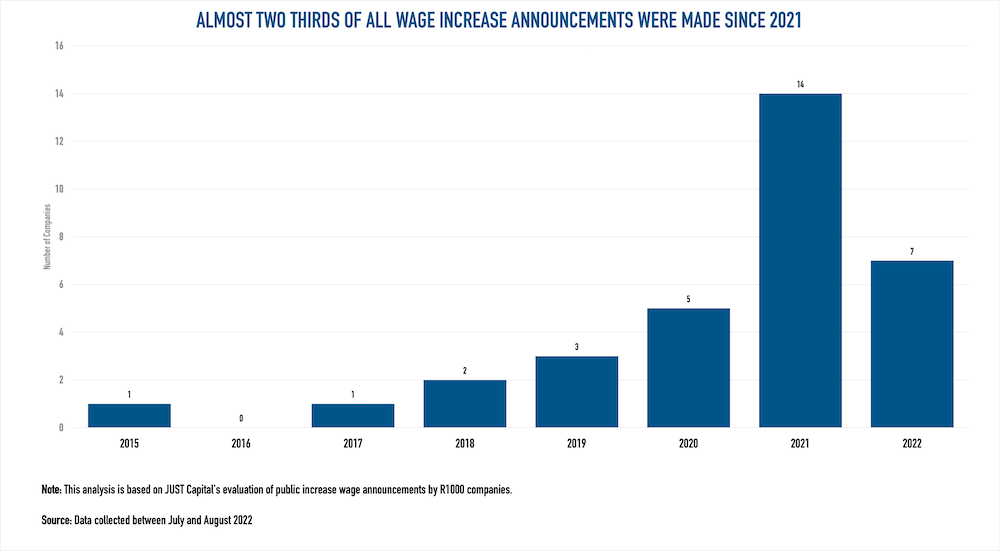 It is important to consider these wage increases in the context of inflation, as wage growth may decrease or even result in wage declines because of inflation. To answer the question of whether workers are earning real wage gains, we focused on the subset of wage increases announced since April 2021 when inflation picked up in the U.S. and found that there were only 10 wage increase announcements during this time period that resulted in real, rather than only nominal, wage gains.

Among the 10 companies whose wage increases led to real wage gains for their workers, four stood out: Walgreens, Vail Resorts, US Bancorp, and Costco. 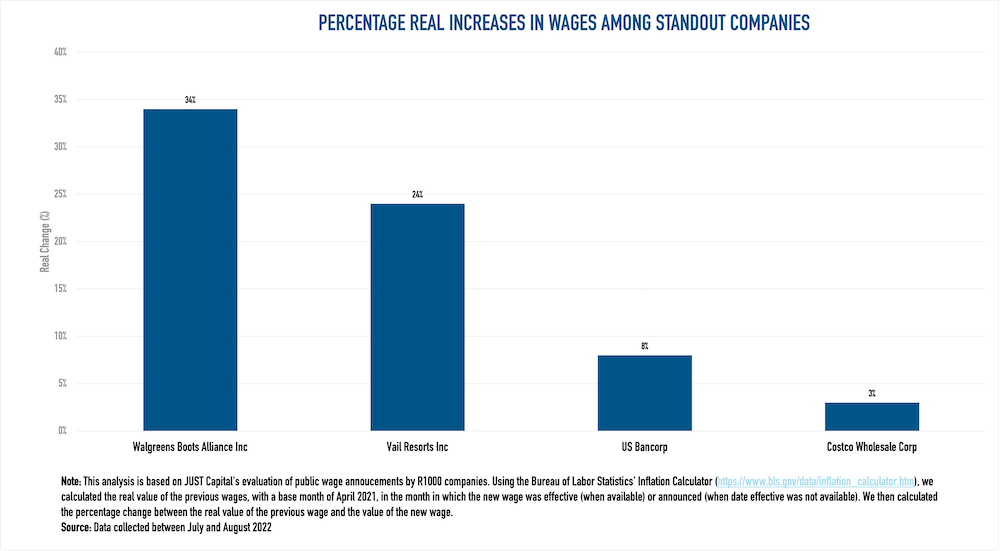 Both Walgreens and Vail Resorts have made large investments in their workers’ wages. In August 2021, Walgreens announced that it was raising its minimum wage for entry level workers from $10 to $15 dollars per hour effective November 2022, resulting in a 34% increase in real wages. Similarly, Vail Resorts raised wages from $15 to $20 dollars in March 2022, yielding a 24% real wage increase. These wage adjustments were greater than inflation, leading to more money in the pockets of employees.

Although the increases made by US Bancorp and Costco resulted in lower percentage real wage growth (8% and 3%, respectively), both companies have regularly announced wage increases. Over the course of three years, Costco raised its minimum wage four times, effectively increasing its pay from $14 in 2018 to $17 in 2021. Similarly, US Bancorp set a $15 minimum wage in 2018 and raised pay two additional times to reach $20 in 2022. The regularity of these increases signals that both companies are responding to the rapidly changing economic climate to ensure that their workers’ pay corresponds to the rising cost of living.

One of multiple elements of worker financial wellness

While raising wages to meet the rising cost of living is crucial, it is important to note that companies should also continually investigate if their workers are making a living wage to cover the basic expenditures for themselves and their families where they reside. To understand if their workers are struggling to get by, companies should perform worker financial wellness assessments, and can join our Worker Financial Wellness Initiative to learn more on how to do this work from a growing community of corporate practitioners.

We applaud the companies that are stepping up to increase disclosures around their minimum wage and wage increases, but there is still a general lack of wage transparency across America’s largest companies. Despite the business case for taking action, this lack of data may indicate a lack of real wage increases, or at the very least that their actions are falling short of the American public’s expectations. Both more disclosure and real wage increases are instrumental in creating a more just economy that better serves all Americans.