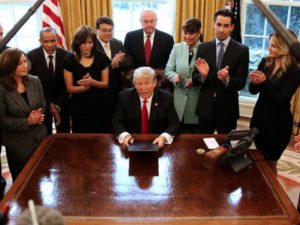 The Executive Order signed last Friday evening by President Trump suspending or barring immigrants and refugees from seven countries from entering the United States has not only sparked protests and outcry around the country, but also provoked widespread condemnation from the business community that reflects their customers’ – and employees’ – outrage.

At JUST Capital, a new nonprofit research group that provides data and rankings on how large corporations perform on issues that matter most to the public, this comes as little surprise. We’ve conducted interviews with 50,000 Americans over the last two years. From these surveys we know the majority of Americans ranks non-discrimination and diversity among the most important determinants of a just company. Also high on the list are issues of fair taxation, generous health benefits and retirement planning, low political spending, good customer treatment, worker respect compensation, and truthful advertising.

Many of the 2016 America’s Most Just Companies – the annual list we release with Forbes – are the very companies currently making their voices heard.

Starbucks has pledged jobs to 10,000 refugees worldwide. Google and others have made major donations to the ACLU. The leaders of Salesforce, Facebook, Apple, Goldman Sachs, Microsoft, IBM, Netflix, Amazon, Nike, and many others joined together in speaking out about their disagreement with the order. 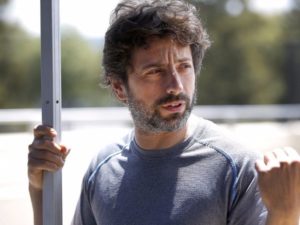 Many corporate leaders have responded with personal notes or individual actions. Google co-founder Sergey Brin showed up at San Francisco’s airport declaring that he too is a refugee, and Microsoft’s Satya Nadella wrote movingly of his immigrant experiences.

In some instances, companies’ responses have had competitive ramifications. Lyft experienced a wave of popular support for backing the ACLU, while Uber became the target of a flash online boycott campaign because its CEO was seen as too supportive of President Trump and its platform was seen as insufficiently supportive of a JFK taxi strike.

These reactions are not simple knee-jerk responses to the Executive Order. They evidence the fact that companies have an authentic role to play in addressing matters of pressing social, human, and economic concern. This makes sense.

Companies are fundamentally human ecosystems. They are the product of human interaction, ingenuity, passion, and hope. They reflect the culture and values of the people who show up every day to work there. They affect the lives of millions of families, small businesses, and communities at home and around the world. It is precisely in moments such as these that corporations should show their human side.

As Uber can testify, doing this successfully is by no means straightforward. There is no clear playbook. However, silence is increasingly not an option.

At JUST Capital, our mission is rooted in the idea that shedding light on how companies really act – in an unbiased, apolitical, and credible way – empowers people. We do this because we know that across demographics – age, race, political affiliation, geographic region, and others – Americans want to work for, buy from, and invest in companies they respect and whose values they share. In other words, being just is good for business.

Our own research, like that of many others, has found that companies that treat workers, customers and communities with respect; that pay their people fairly; that provide for a diverse, safe, and inclusive workplace; that are led by people with integrity; and that operate in a way that reflects the core values of ordinary people make a better return for investors.

The lines between corporate business interests and social action will continue to blur, regardless of the actions of the Trump Administration. As they do, business leaders across America and around the world will see that their license to do business increasingly depends on the vitality of their relationships with society.

Those that act on the things the American people – all people – value most will be the ones that truly prosper.

This article was originally published on Business Insider.