Since 2015, we have been regularly polling Americans for their opinions on just business behavior. One key element of exploration is understanding the degree to which the public believes corporations have a role to play in speaking out on societal issues. In 2019, our Annual Survey showed that 59% of Americans said CEOs of large companies have a responsibility to take a stand on important social issues. In 2020 that percentage grew to 68%.

This trendline shows that, more and more, the public is looking for corporate leadership on issues above and beyond business operations. In our recent focus groups, we heard loud and clear that Americans increasingly expect CEOs to speak out on some of America’s most pressing societal issues, including inequality, racial inequity, and threats to democracy. Findings from a recent poll from our partners at The Harris Poll echo our own research: a strong majority of Americans (60%) said that well-known brands taking stands on social issues is more important than in the past, and younger generations share this stance to a significantly greater degree (70% Gen Z, Millennials). As the public’s expectations for just business evolve, JUST Capital is committed to continuing to probe what it means for companies, and what Americans expect from corporate leaders on the most pressing issues of our time.

To that end, this most recent survey, fielded in April in partnership with The Harris Poll, reached 2,000 Americans in an effort to understand whether they believe CEOs have a role to play in influencing lawmakers across a variety of issues. Strong majorities agree that CEOs should influence lawmakers when it comes to both economic issues such as corporate tax policy, infrastructure, and blocking hacking attempts from foreign entities (70%), as well as societal issues such as racial equality (65%) and voting rights (59%). 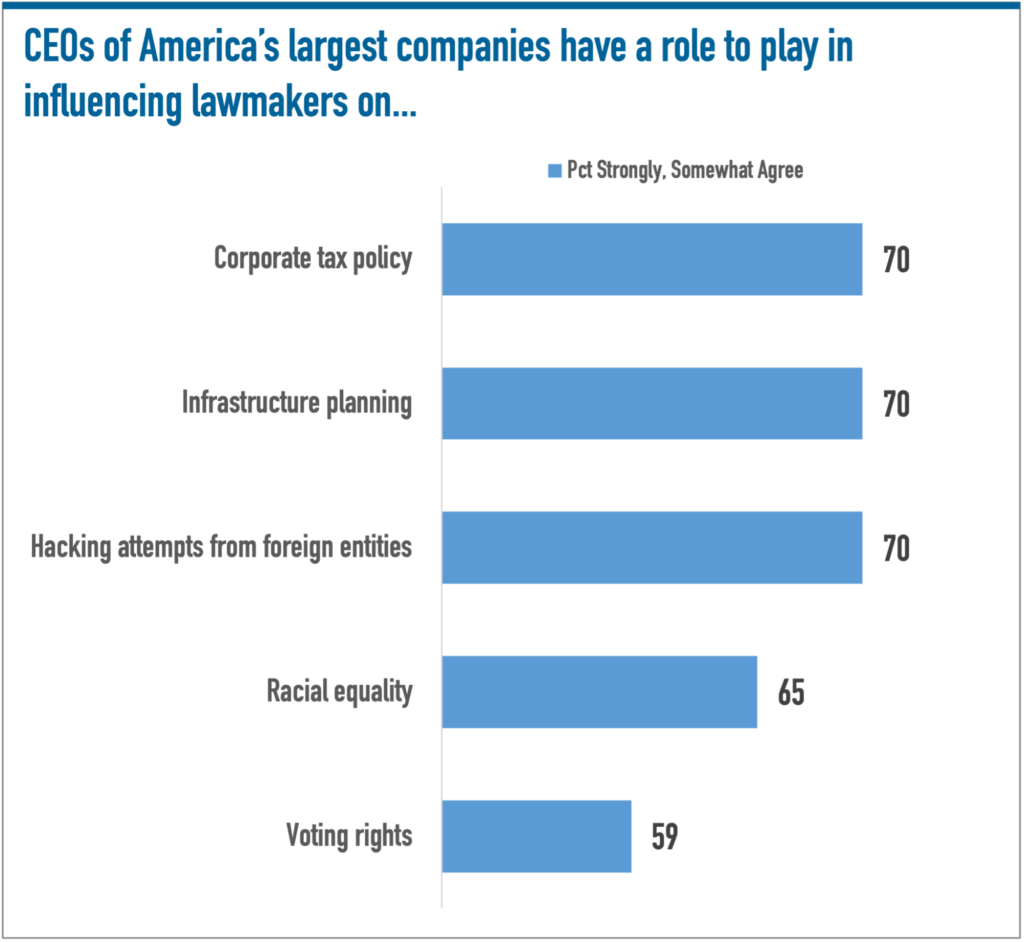 When we look at responses to this question across different demographic groups, results generally follow the same pattern of responses. However, there are some pronounced differences when we look along generational lines. 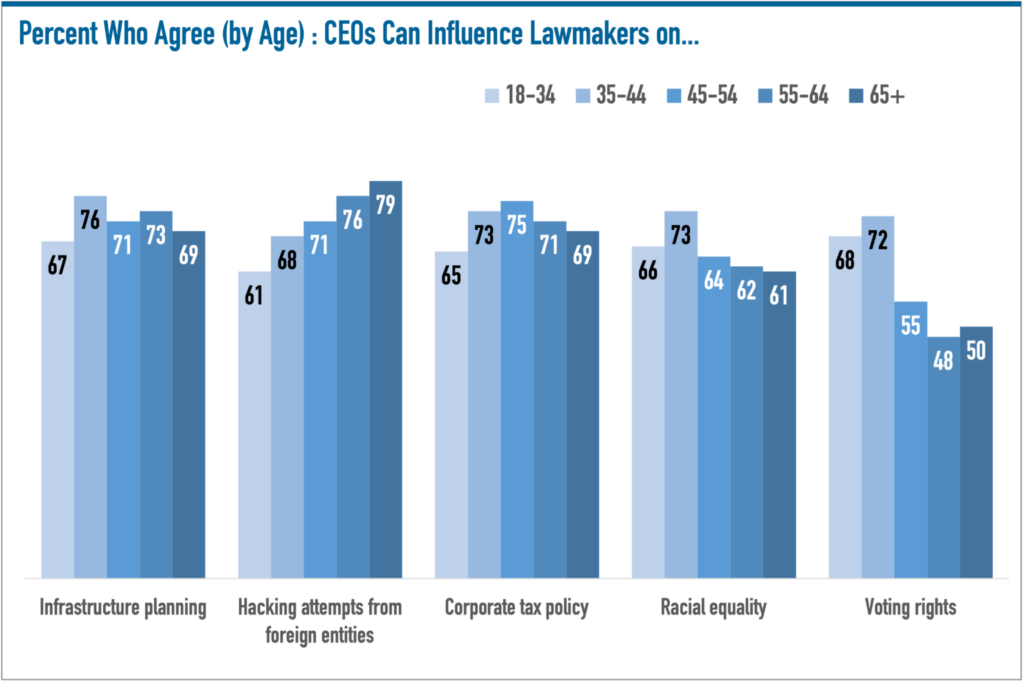 Gen Z and Millennials – respondents 18-44 – are more likely to agree that CEOs have a role to play in influencing lawmakers on social issues, like racial equality and voting rights, than their older counterparts. Conversely, Americans 55+ placed more emphasis on the importance of economic issues like infrastructure, hacking, and tax policies.

In the last month, voting rights specifically has emerged as a major issue, with a number of CEOs speaking out against restrictive new voting laws emerging in states like Georgia, Florida, and Texas. A survey we conducted leading up to the 2020 election showed that 57% of respondents believe companies have a moderate or significant role to play in upholding U.S. democracy by advocating to roll back laws that restrict voting rights for groups disproportionately affected, such as Black voters.

This most recent poll tells a similar story, with a majority (59%) agreeing that CEOs can influence lawmakers on voting rights issues. However, looking at these results across party lines, there is disparity in agreement among Republicans, Democrats, and even Independents. 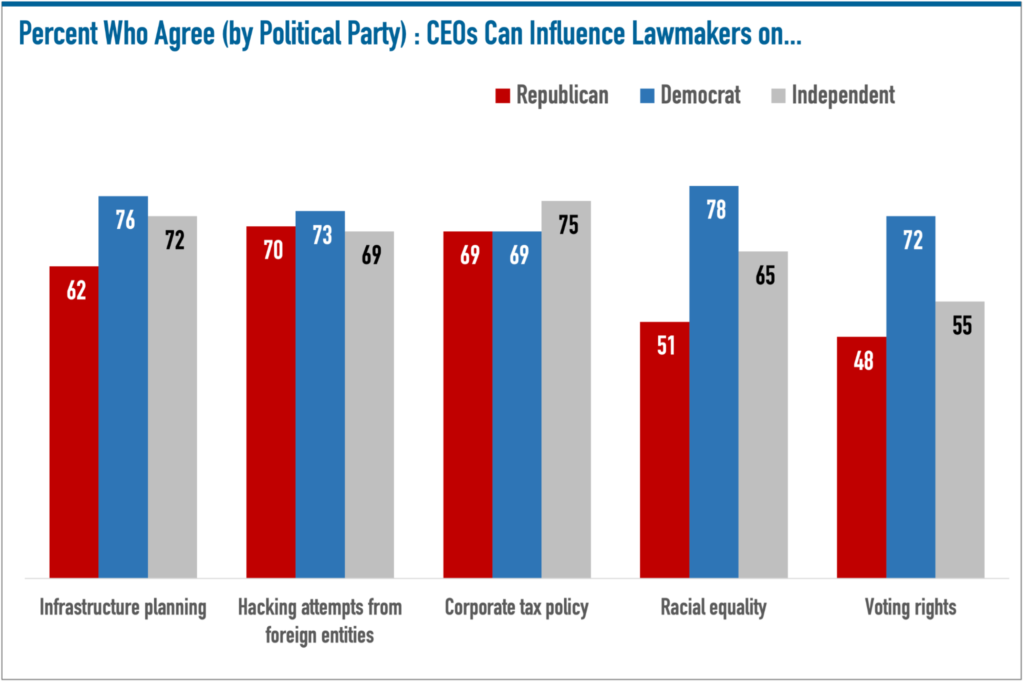 But much like we saw in the previous question, there are clear differences when looking at age, race/ethnicity, and political party, with more support for speaking out from younger generations, Democrats, and Black Americans. 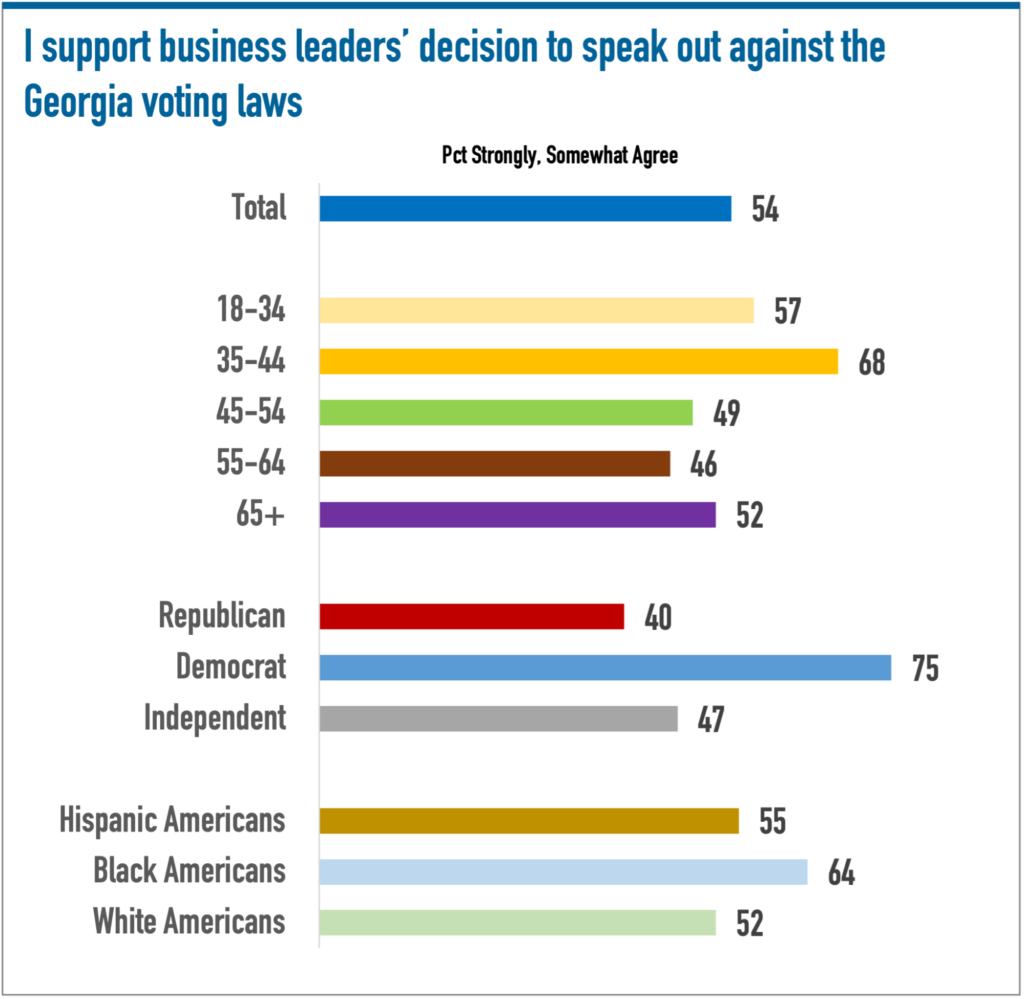 For corporate leaders, navigating a commitment to social issues while avoiding partisanship is proving to be a delicate dance. We will continue to regularly poll the public to understand how they want business leaders to respond to the critical stakeholder issues facing the country and economy today and in the months and years to come. With signals that the public increasingly expects business leaders to speak out, we will continue to monitor what Americans want, how companies are measuring up, and where corporate America should focus to align their practices with the priorities of the public.

This survey was conducted online within the United States by The Harris Poll in partnership with JUST Capital from April 29–May 3rd, 2021 among 2,061 U.S. adults ages 18 and older. This online survey is not based on a probability sample and therefore, is not representative of America. The results represent only the views of the sample and no estimates of sampling error can be calculated. For complete survey methodology, including weighting variables and subgroup sample sizes, please contact Jennifer Tonti at jtonti@justcapital.com. Detailed findings from this survey are available here.

Survey: Here’s What Americans Expect From Corporate America in the Wake of the Capitol Riot