Today marks one year since 181 Business Roundtable CEOs signed on to a new Statement of Corporate Purpose (that number is now up to 220 executives, representing 206 companies), committing to lead their companies to the benefit of all stakeholders – including workers, customers, communities, and the environment – not just shareholders. The announcement hastened the embrace of stakeholder capitalism, from the boardroom, to the trading floor, to Davos, where business elites debated the topic as one of its major themes this past January.

The rest of 2020 has not played out in a way that anyone expected, with COVID-19 radically impacting all aspects of our society and economy. The pandemic, however, made the debate around a shift to stakeholder capitalism even more tangible, as companies mobilized to take care of their workers, customers, and communities in response to the dual health and economic crises.

When we asked Americans in our recent survey how they think companies are doing navigating the shift, 90% agree that it’s important for large companies to promote an economy that serves all Americans, and 58% believe that companies are actually doing well on the follow-through – a 14-percentage point increase from when we asked the same question one year ago.

From our ongoing polling throughout the pandemic, we know that a majority of survey respondents (58%) believe America’s largest companies have been showing leadership during the crisis. And our survey partner, The Harris Poll, similarly found that 72% of Americans “trust companies more than the Federal government to help find solutions to issues related to the COVID-19 pandemic and racial equality movement.”

So how do the public’s largely positive views on corporate action line up with what we’ve found through our COVID-19 Corporate Response Tracker?

Today, we analyze how the BRT purpose statement signatories measure up to Americans’ expectations, and compare to other Russell 1000 companies, around six critical issues of the pandemic – back-up dependent care, personal protective equipment (PPE), paid sick leave, financial assistance, customer accommodations, and community relief funds – to better understand how the companies pushing for stakeholder capitalism are actually serving their stakeholders this year. Importantly, the analysis shows both individual corporate leadership among the country’s largest companies and emphasizes the need for ongoing and accelerated, collective corporate leadership on stakeholder capitalism.

The two main takeaways from this assessment are:

1. BRT signatories significantly outperform their peers on all six issues we examined, in terms of the transparency of their actions and their level of public disclosure.

2. There is still a significant gap between what the American people want companies,  including BRT signatories, to prioritize and what companies are actually doing. 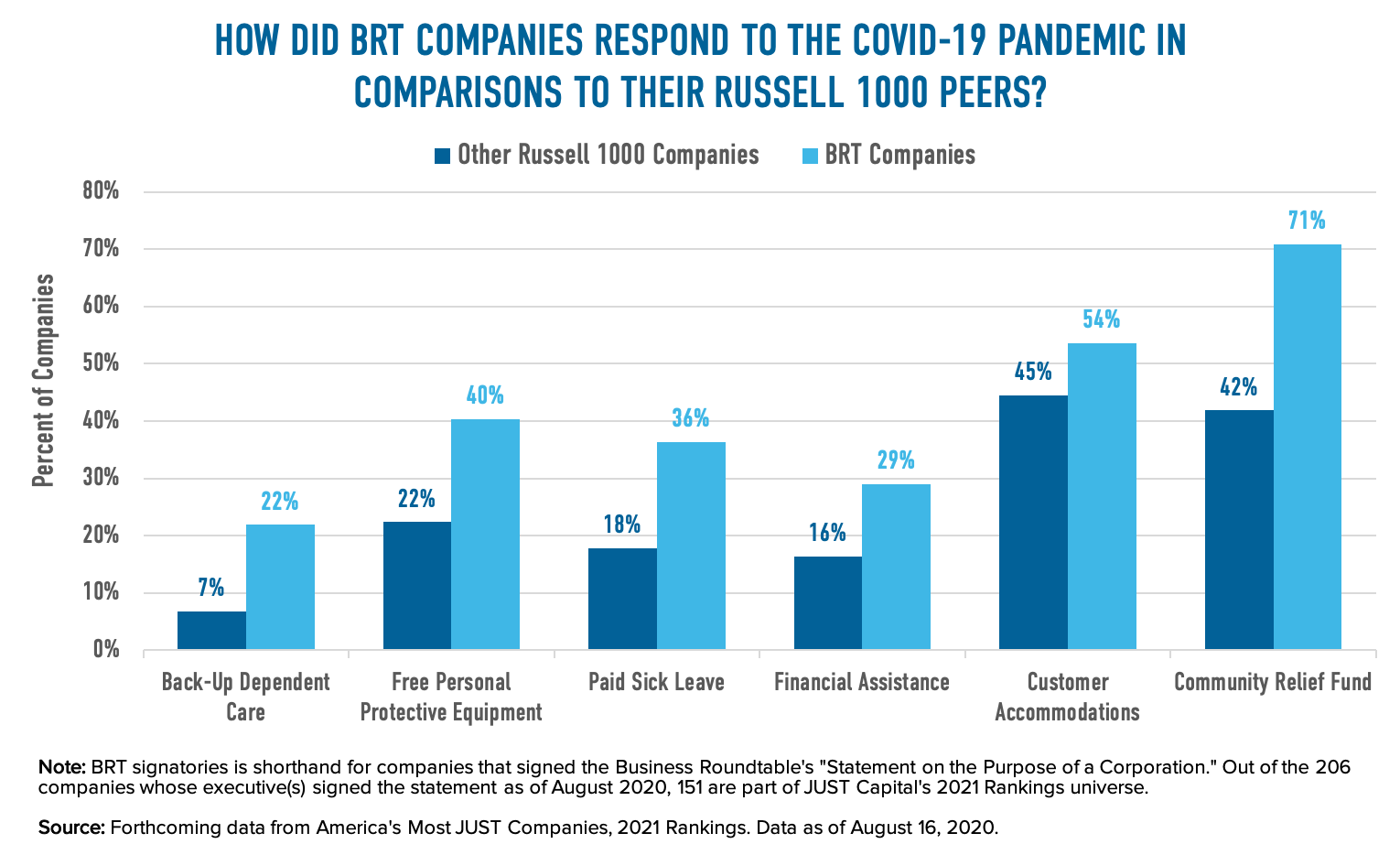 Let’s look at back-up dependent care first as a critical example, which will be further exacerbated during the most challenging back-to-school season in our nation’s history. In a July letter to Congress the Roundtable said, “To help individuals and families manage through the COVID-19 pandemic and beyond, Business Roundtable supports additional resources for childcare providers to ensure greater access to affordable, quality care and early education.”

According to our analysis, 22% of BRT signatories disclosed that they provided additional days of back-up dependent care or more paid time off for caregiving for working families during the pandemic. While BRT signatories are three times more likely than their Russell 1000 peers to disclose this benefit, the overwhelming majority of companies that do not disclose adding or expanding a back-up dependent care policy are most likely leaving working parents in the U.S. without a solution to the ongoing disruptions to their typical care arrangements caused by the shift to remote work and school and childcare center closures. The lack of current government support for the care crisis amplifies the need for employers to help their workers bridge the gap in dependent care in the uncertain months ahead. 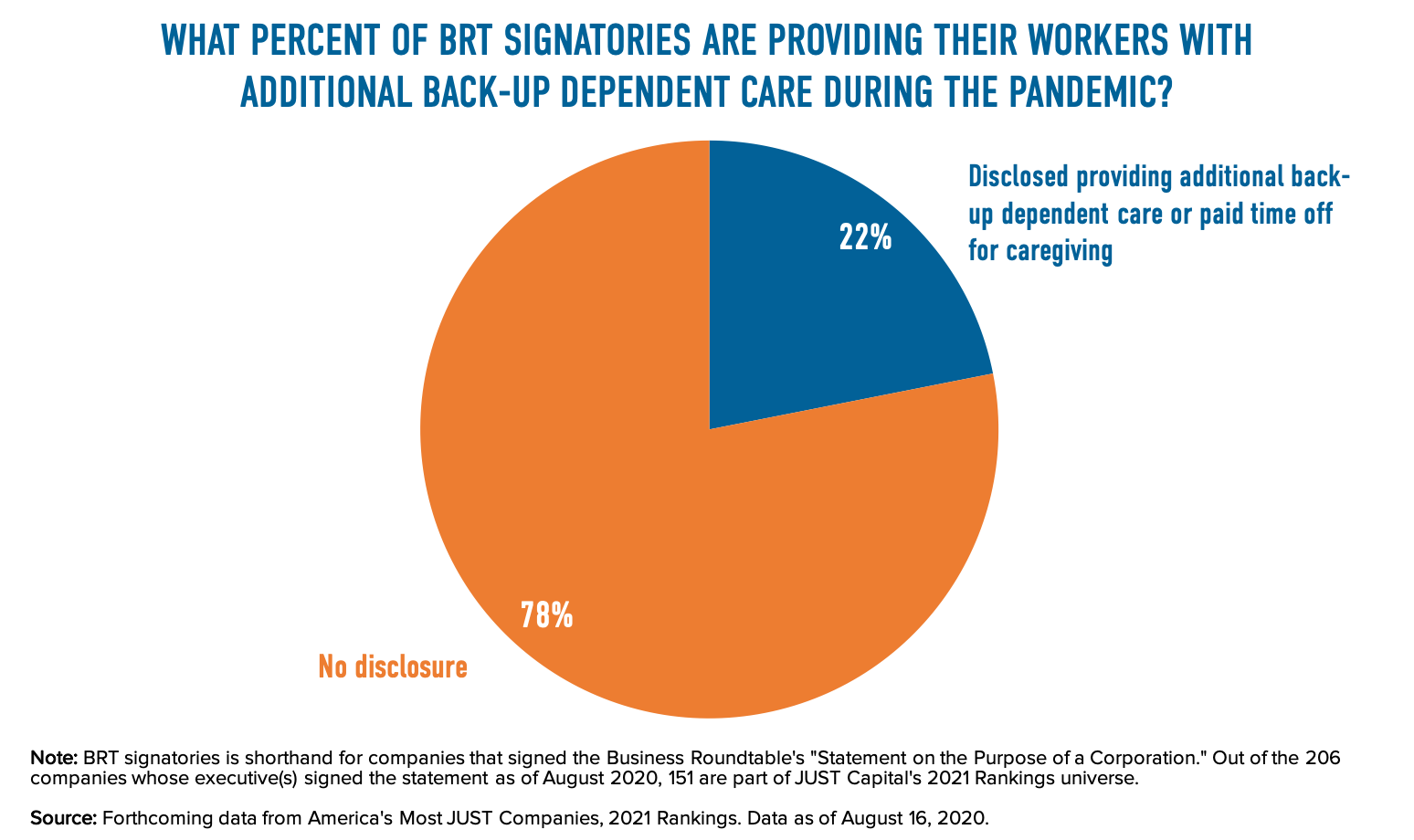 90% of Americans want companies to prioritize the health and safety of frontline workers by providing personal protection equipment (PPE) such as masks and gloves, and 40% of BRT signatories disclosed they are providing their workers with free PPE. According to our analysis, BRT signatories are 1.8 times more likely to have disclosed providing free PPE than their peers.

With more and more companies reopening and requiring their customers to wear masks, it’s clear that the risks remain high for employees in the workplace and the need for PPE and other health and safety measures are increasingly, not decreasingly, important. 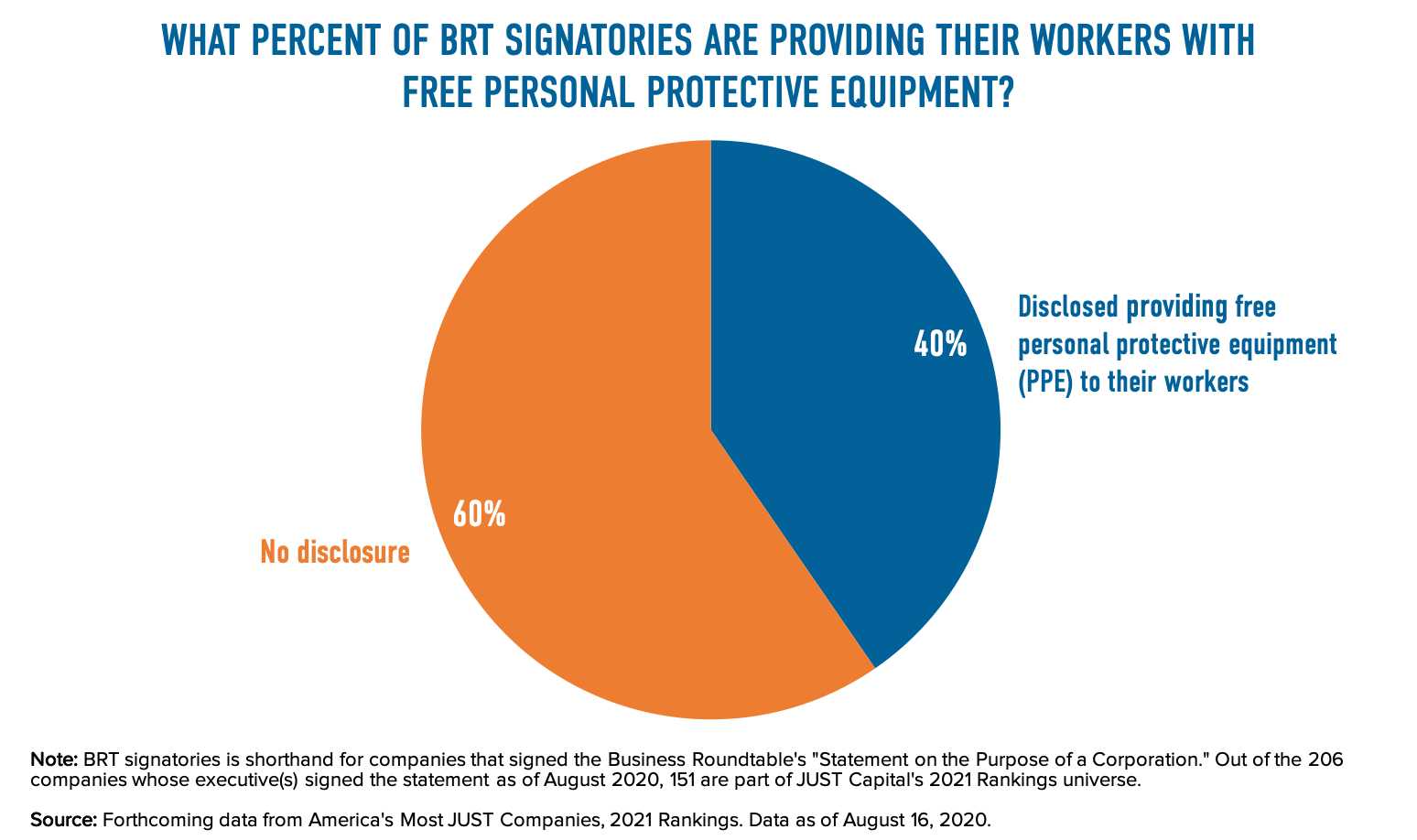 We know from a recent U.S. Census Bureau Survey that 71% of adults who didn’t work because they had COVID-19 symptoms reported receiving no pay during that period, and only 10% reported using paid leave during their time away from work. This is putting further pressure on corporate America to step up and safeguard their workforces. BRT signatory Home Depot stands out among its peers in the retail sector with the maximum amount of leave we’ve tracked, offering a generous 24 days. 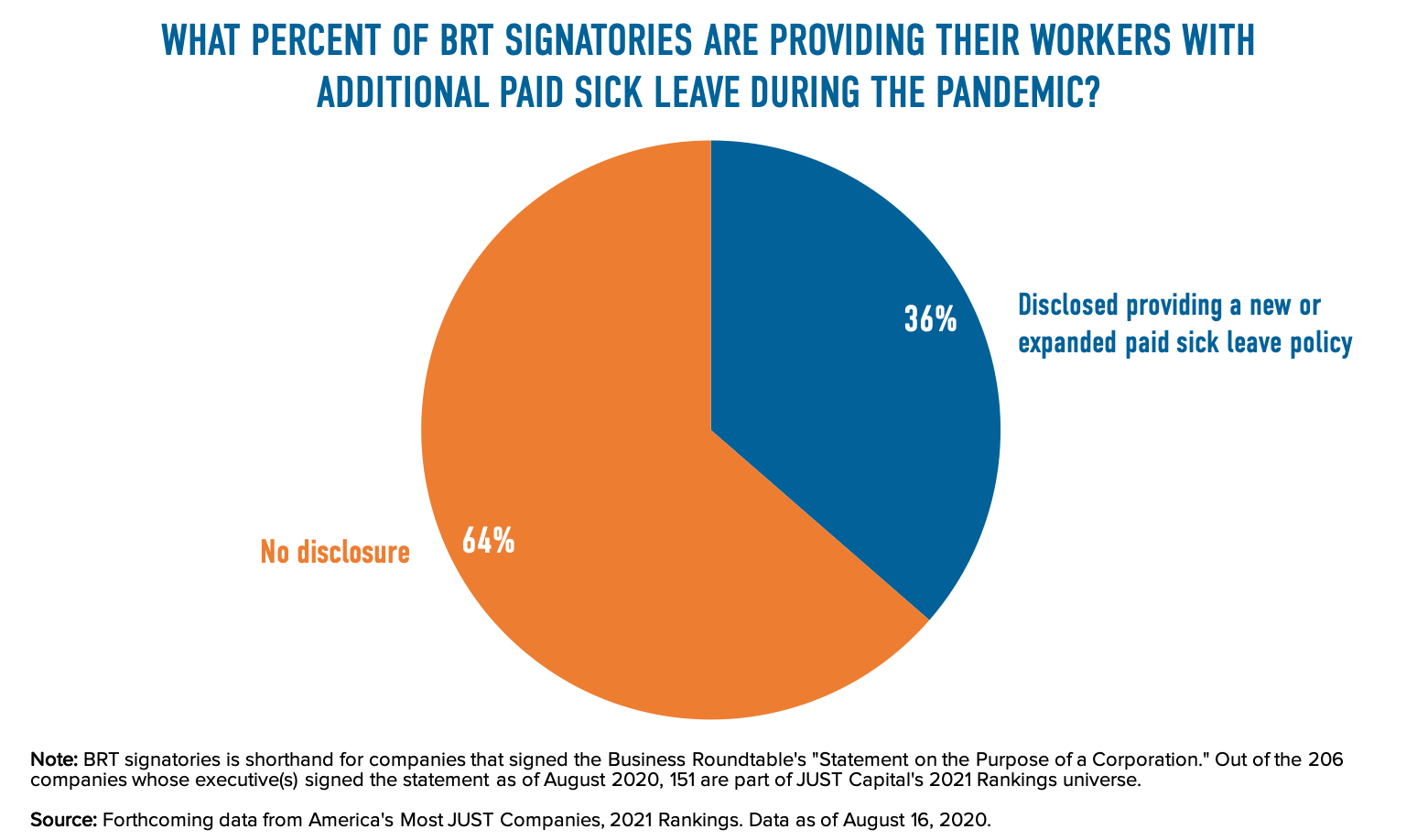 77% of Americans want companies to prioritize hazard pay or other financial assistance to frontline workers, and 29% of BRT signatories announced that they were providing some type of financial assistance to their employees. However, just 9% specifically offered a temporary wage increase or hazard pay to their workers, with an average increase to hourly wages of $2.10 per hour. BRT signatories are 1.8 times more likely than peers to disclose providing grants, bonuses, wage increases, or additional overtime pay.

From our ongoing analysis of Hazard Pay policies we know that two BRT signatories – Target and Tractor Supply Company – also recently announced permanent wage increases for frontline workers. However, many of the companies we tracked – including BRT signatories Amazon, AT&T, Chipotle, and Walmart – have let their hazard pay policies expire despite the accelerating crisis and its increased impact on frontline workers. 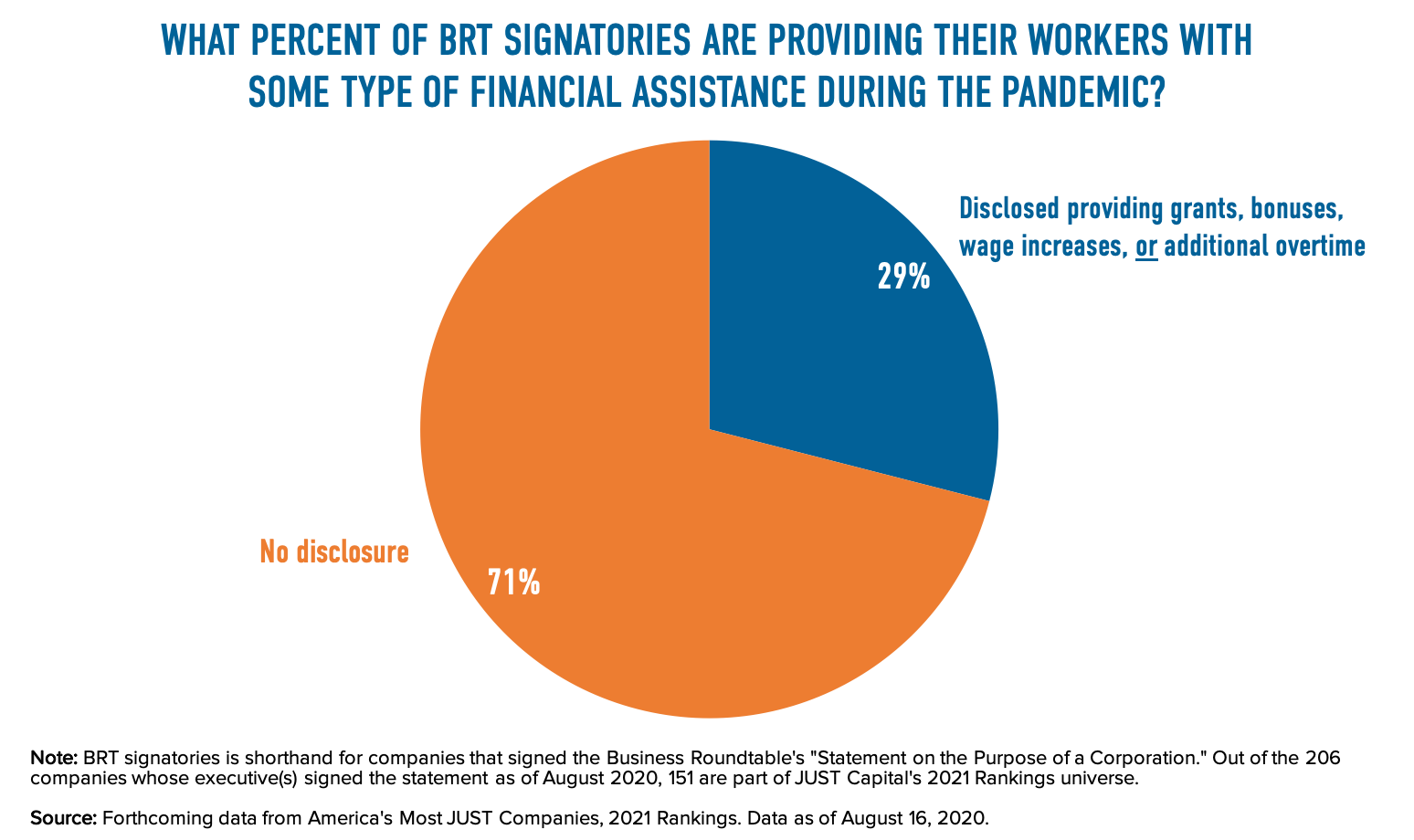 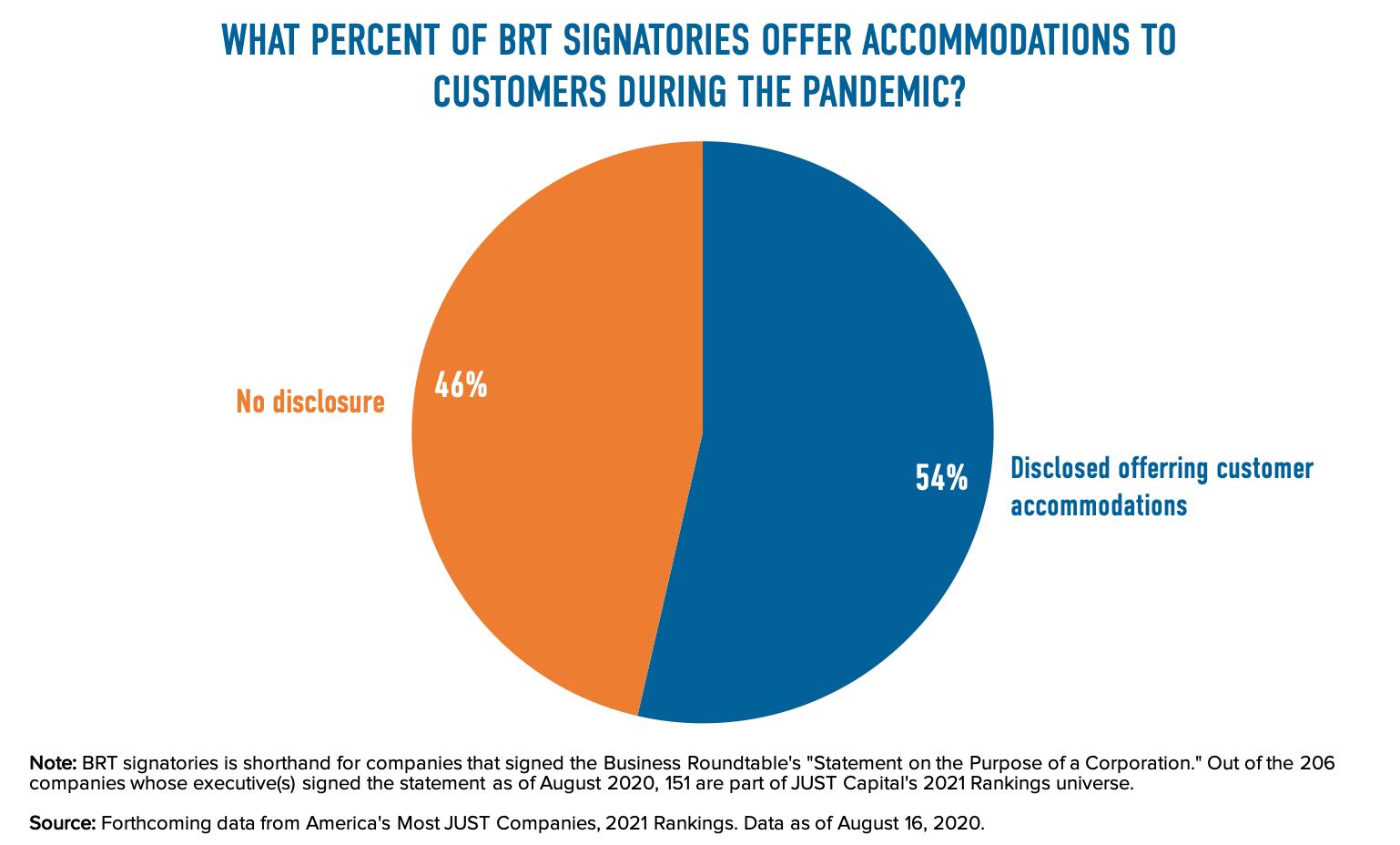 90% of Americans expect companies to engage in some kind of community support during the COVID-19 crisis, and an overwhelming 71% of BRT signatories announced making cash donations to help with COVID-19 pandemic relief to support the communities in which they operate. BRT signatories are 1.7 times more likely than peers to disclose that they made financial contributions to community relief efforts during the pandemic. 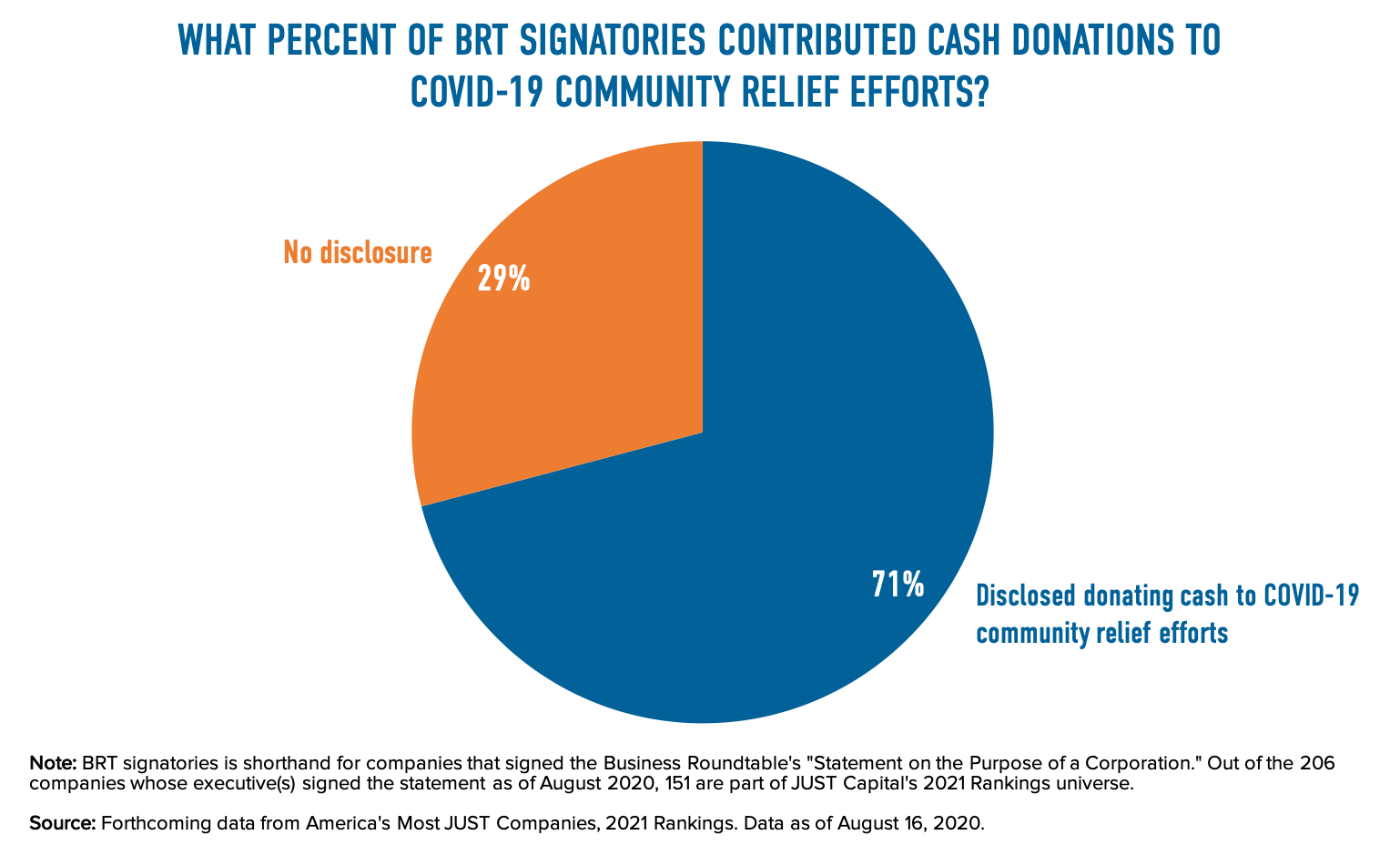 One year after their landmark statement, questions on whether Business Roundtable signatories – and all their peers across corporate America – are walking the talk of their statements of purpose and commitments to stakeholders continue to be asked.

Our analysis indicates that, in fact, BRT signatories have responded comparatively well, and appear to be adopting a more proactive stance than many of their peers in the Russell 1000 on some of the most critical issues of the last six months.

Stepping back to look at the big picture, however, it is clear there is a long way to go before we can say with certainty that the stakeholder model is taking root. For example, throughout this crisis, there have been many reports about corporate America’s discouragement of government policies that could advance stakeholder capitalism, including issues like providing paid sick leave to their workers. This contrast of individual corporate leadership but not societal corporate leadership is unlikely to satisfy the public, which we know increasingly sees CEOs as societal leaders and which demands authenticity and consistency of action.

How companies engage with each other, with civil society, and with government to drive societal leadership on stakeholder capitalism, is the defining issue. Only through this consistency can we create an economy that serves all Americans, ensuring worker health, safety, and financial security not only for the duration of the crisis, but for years to come.

Out of the total 206 companies under the leadership of BRT signatories, JUST Capital tracks and ranks 151 of them, which are featured in the analysis above.

This report was written by Kavya Vaghul, Amanda Keating, and Michelle Mullineaux.  Special thanks to Kim Ira and Molly Stutzman for additional research.