This year, March 24 marks Equal Pay Day for women in the United States – a date that signifies how far into 2021 women have had to work to earn what men did in 2020 alone. For many women of color, the dates are considerably starker: Black Women’s Equal Pay Day falls on August 3 this year, while Native and Latina women must work until September 8 and October 21, respectively, to earn what their white male counterparts did the year prior.

This is not a new issue, and it’s one that women grapple with worldwide. Over the past several years, JUST Capital has been analyzing what steps corporate America has taken to shrink the pay gap – particularly, whether they disclose that they’ve conducted a pay equity analysis, and further, whether they’ve published the results. Last year, we found that 22% of the 922 largest public U.S. corporations we ranked disclosed conducting such an analysis, a significant 57% increase from 2019.

Following a year roiled by the pandemic and economic recession, pay gap statistics have unfortunately not changed (women still earned just 82 cents for every dollar earned by men in 2020, as they did in 2019). We also found that an almost identical percentage of companies – 21% of the 928 we evaluated for our 2021 Rankings (198 companies) – disclosed conducting a gender pay equity analysis. While there were some methodological shifts in how we measured pay equity analysis disclosure – including assessing gender pay equity analyses and race & ethnicity pay equity analyses in separate data points – the near identical disclosure rate suggests that progress on this issue may have stalled over the past year: 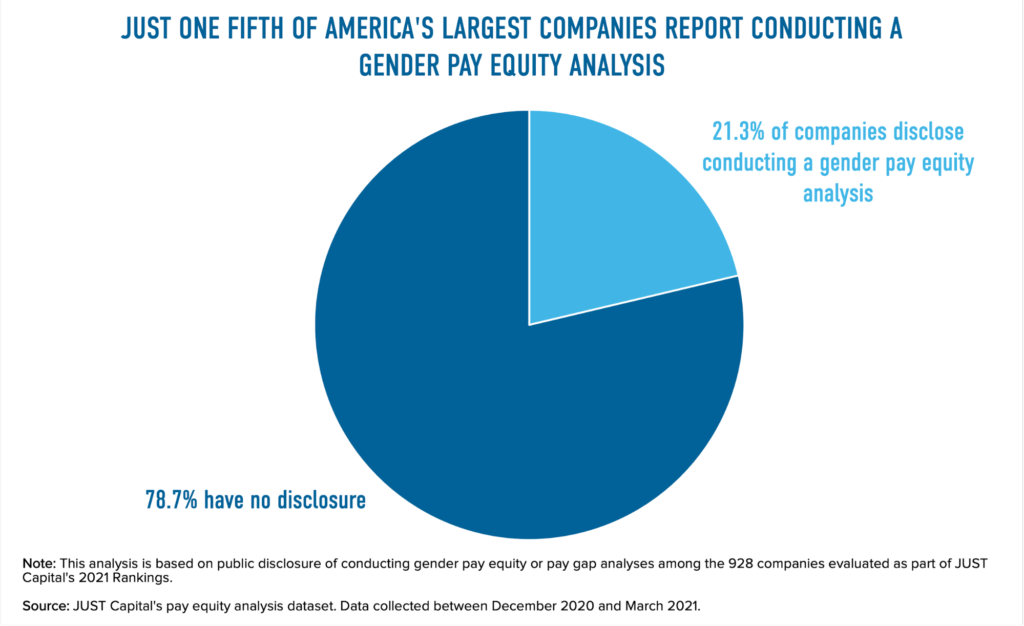 With only one-fifth of America’s largest companies again disclosing that they conducted this kind of analysis – which is a key first step to closing the pay gap in our country – it’s clear that corporate America has more work to do and that this issue must remain in focus as we build back from COVID-19. What is heartening, though, is that more companies are disclosing the results of these analyses. This year, 58% of the 198 companies we analyzed that reported conducting a gender pay equity analysis also disclosed their results, up from 39% last year (of 206 companies conducting either a gender or race/ethnicity analysis).

What companies report, however, varies: Nearly 20% that conduct analyses (39 companies) tend to report that the results of their gender pay equity analyses showed that there were no statistically significant differences in pay between men and women, while roughly 40% (75 companies) share the ratio of average pay between women and men or note that there is 100% parity. 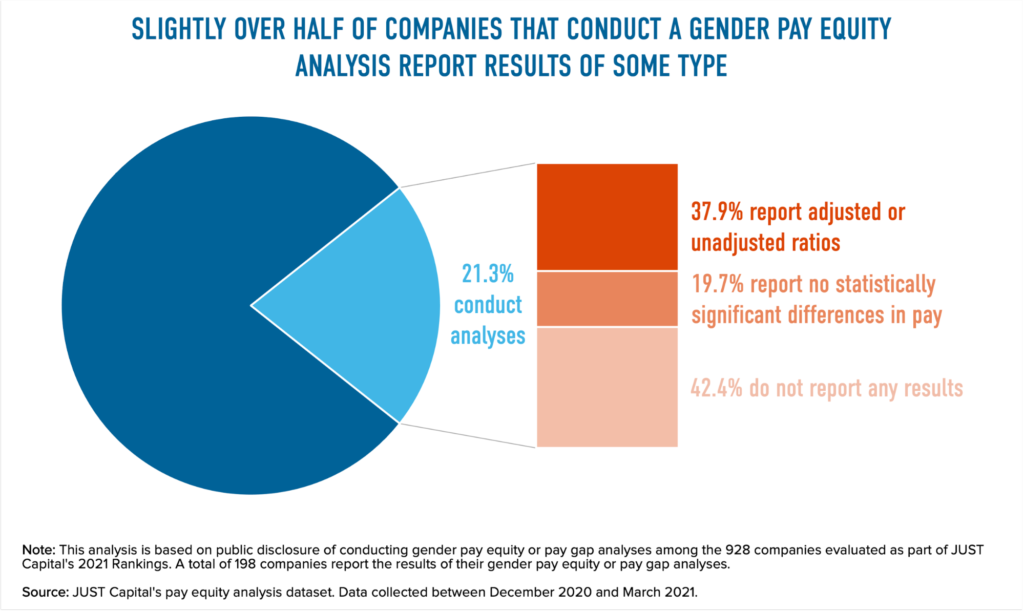 Looking more closely at the 75 companies that disclosed ratios, we find that the vast majority of disclosures indicate that women are paid nearly the same as their male counterparts – on average, 98.26% of their earnings – suggesting, as we’ve also found in past research on gender pay equity, that companies tend to disclose on this issue when they’re able to indicate success in nearing or reaching pay parity: 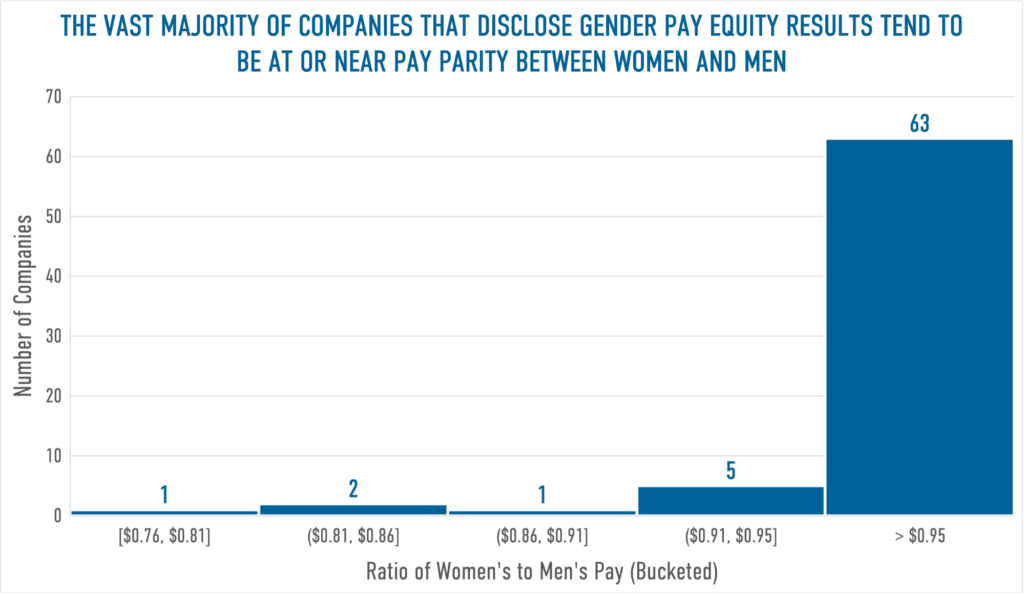 As we continue to rebuild from the COVID-19 pandemic, issues of equity become more – not less – important. Women are among the most severely impacted by job loss during the economic downturn, losing more than 5 million jobs in 2020. And based on this analysis, progress on addressing gender pay equity (particularly, conducting pay equity analyses) seems to have stalled as well. JUST Capital will continue to track the actions companies are taking to advance equity in the workplace, including how the state of gender pay equity continues to shift in corporate America in the months and years to come. 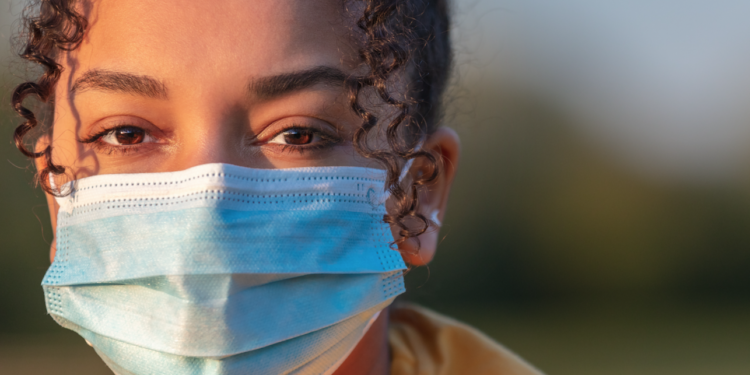 JUST Jobs Analysis: Why Pay Equity Is Still Critically Important in the Time of Coronavirus 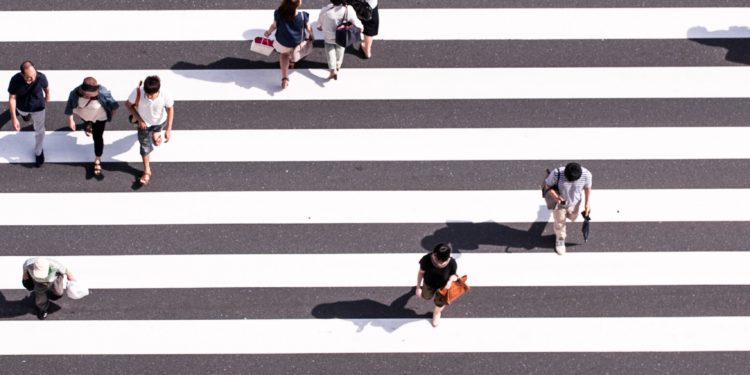 The Win-Win of JUST Jobs